It’s the biggest day of the Iowa Caucus campaign for Iowa Democrats, with the state party’s Jefferson Jackson Dinner set to be held in Vets Auditorium tonight. The speaking schedule has been trimmed considerably, as Jim Webb and Lincoln Chafee both dropped their bids earlier this week, and Joe Biden decided not to jump in at the last minute. No matter, though, as the serious campaigners of Hillary Clinton, Bernie Sanders and Martin O’Malley are the big draws anyway. The IDP expects around 6,000 Democratic activists to attend.

Every year the presidential campaigns participate in the time-honored tradition of “sign wars,” with enthusiastic staffers and volunteers chanting and waving signs outside the event. So far this cycle the rallies haven’t quite matched the intensity or over-the-top showmanship and creativity of the 2003 and 2007 wars, but they’ve still been fun.

Starting Line checked out the scene late last night and early this morning. Here’s what it looks like:

The Clinton campaign was the first on the scene, taking over the entryways to Vets Auditorium last night. 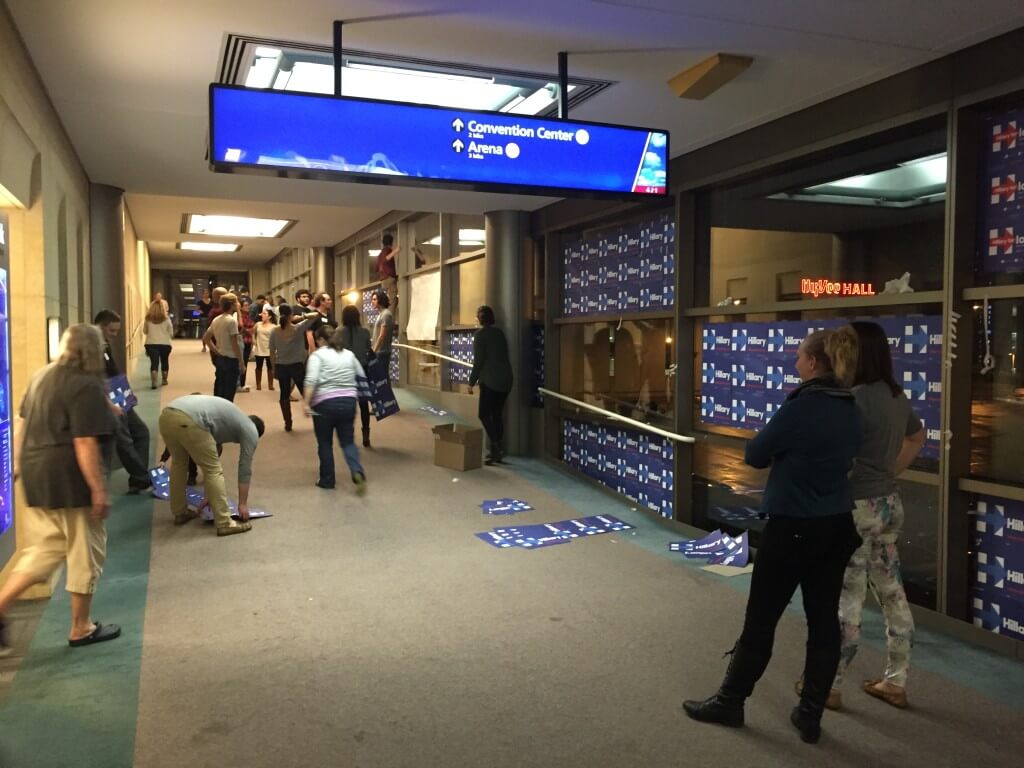 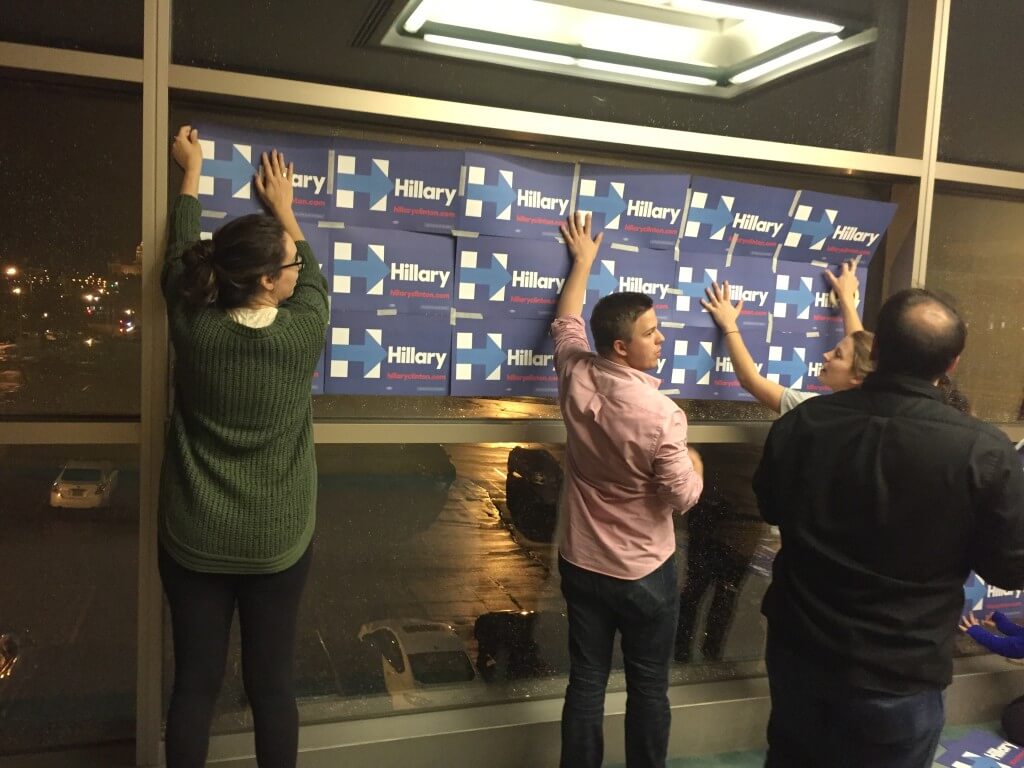 Signs were placed early outside of the ISEA headquarters, helpfully located directly across the street from Vets Auditorium. The National Education Association union endorsed Clinton a few weeks ago. 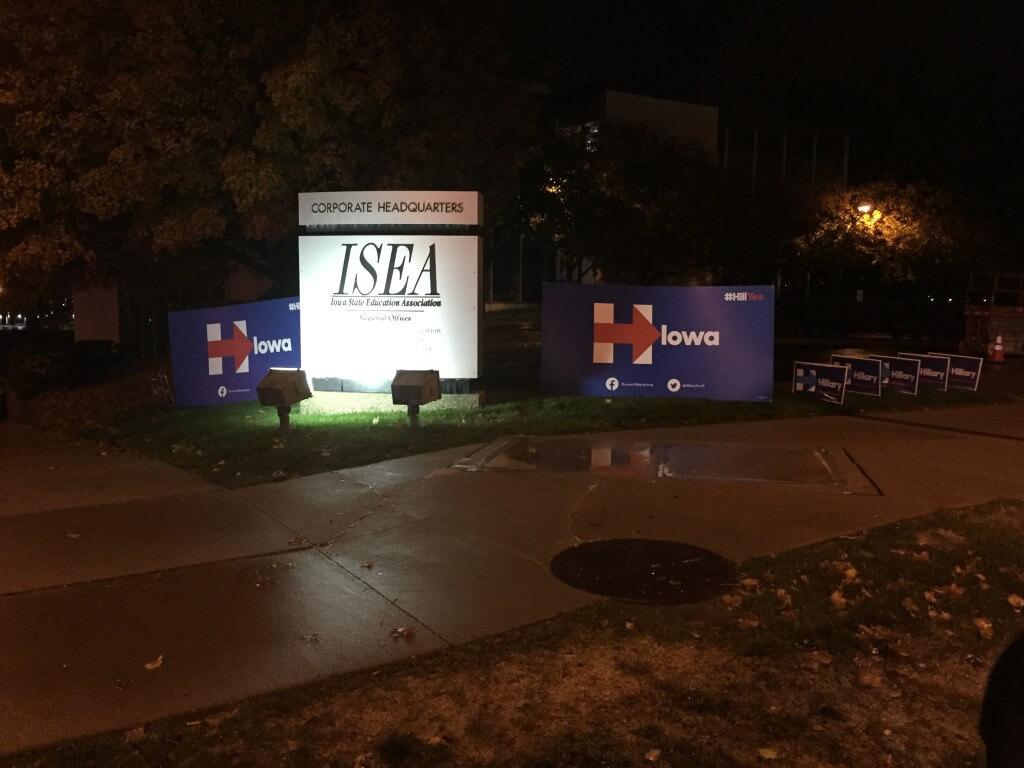 The Clinton team ensured that everyone walking into the dinner today will be traveling through Clinton-decorated skywalk tunnels. 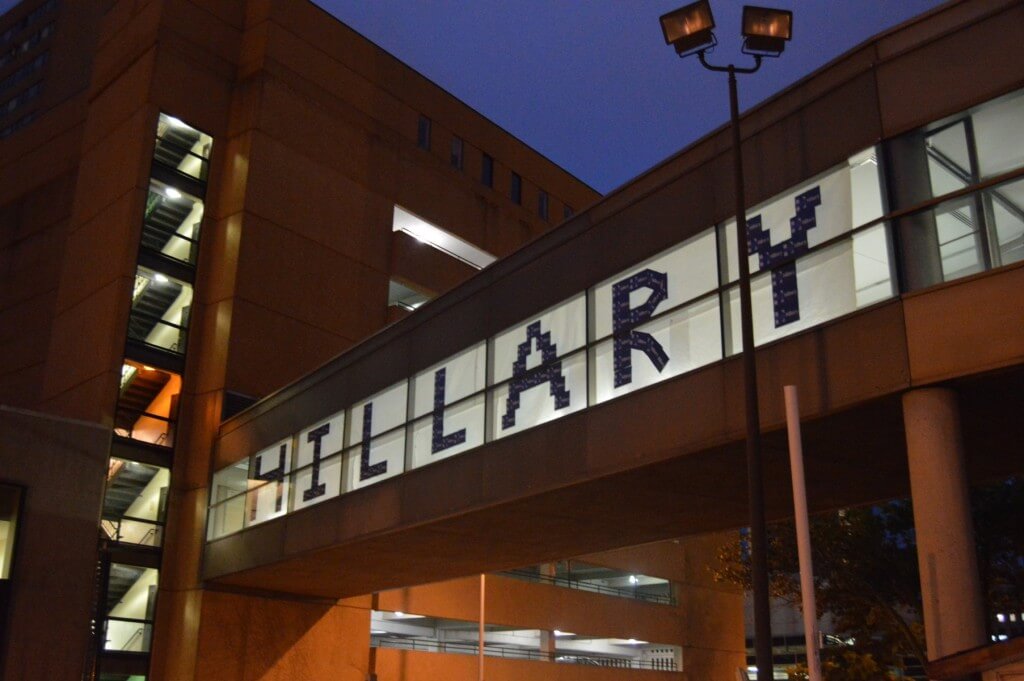 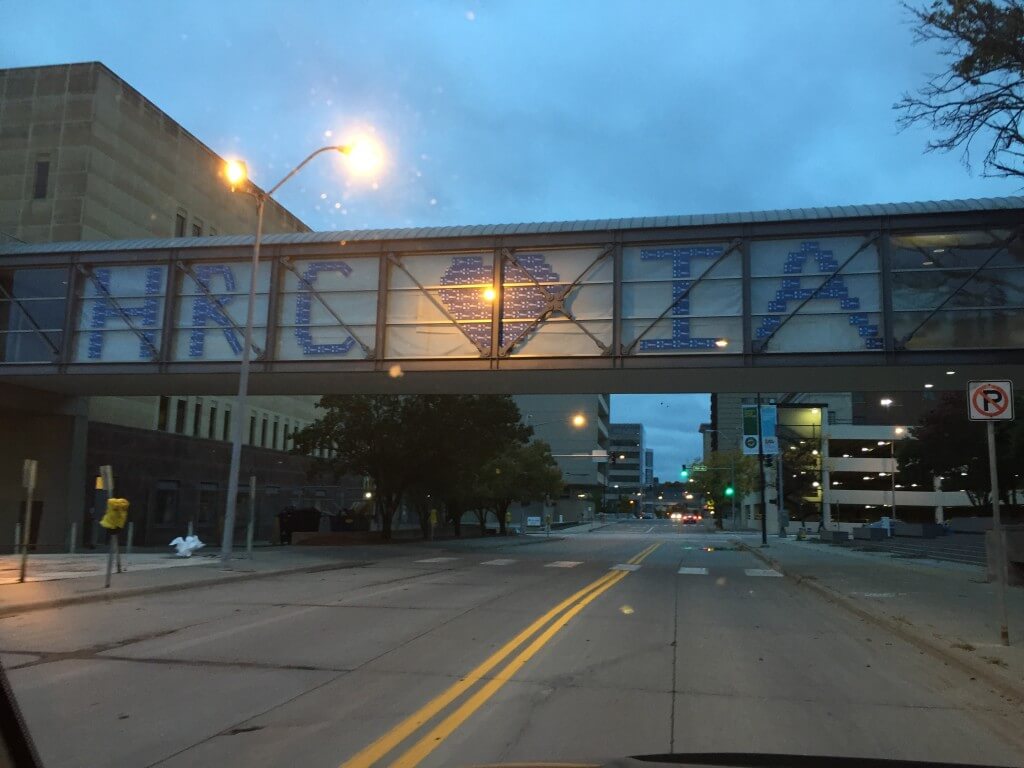 Early this morning, long before the sun came up, the Bernie Sanders team joined the battle, covering 2nd Avenue and surrounding streets with yard signs. 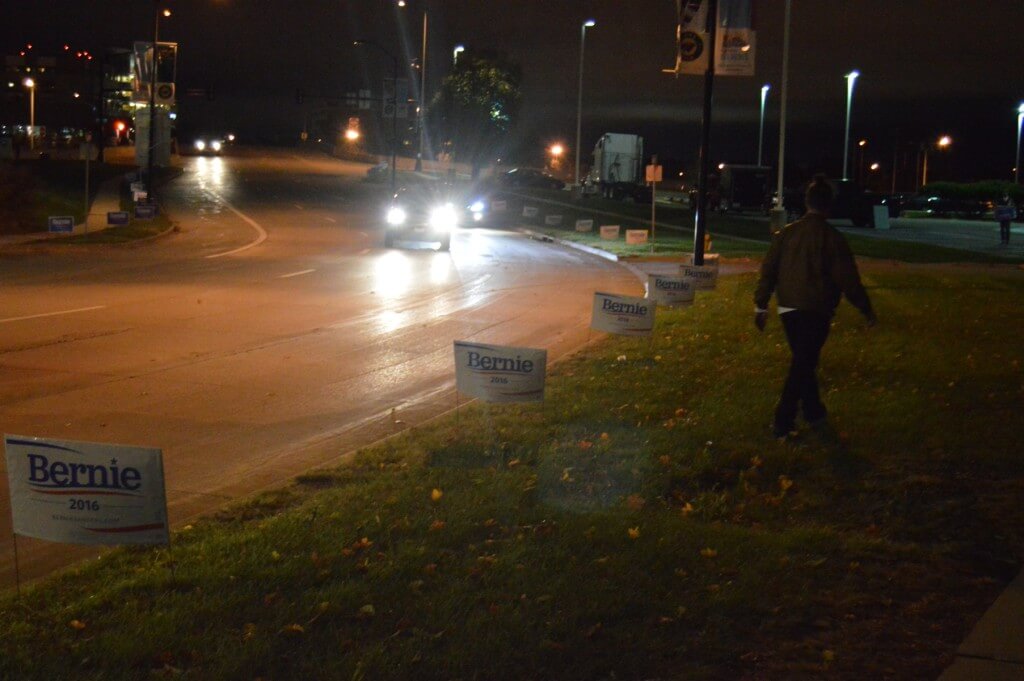 Sanders is planning on hosting a large rally across the river at the armory, then marching over to the JJ Dinner with a throng of supporters in tow. Many insurgent Iowa Caucus campaigns have used large marches to show off their organizational abilities and use it to project a man-of-the-people look. A smaller crew of Sanders staffers worked this morning to line the route with signs. 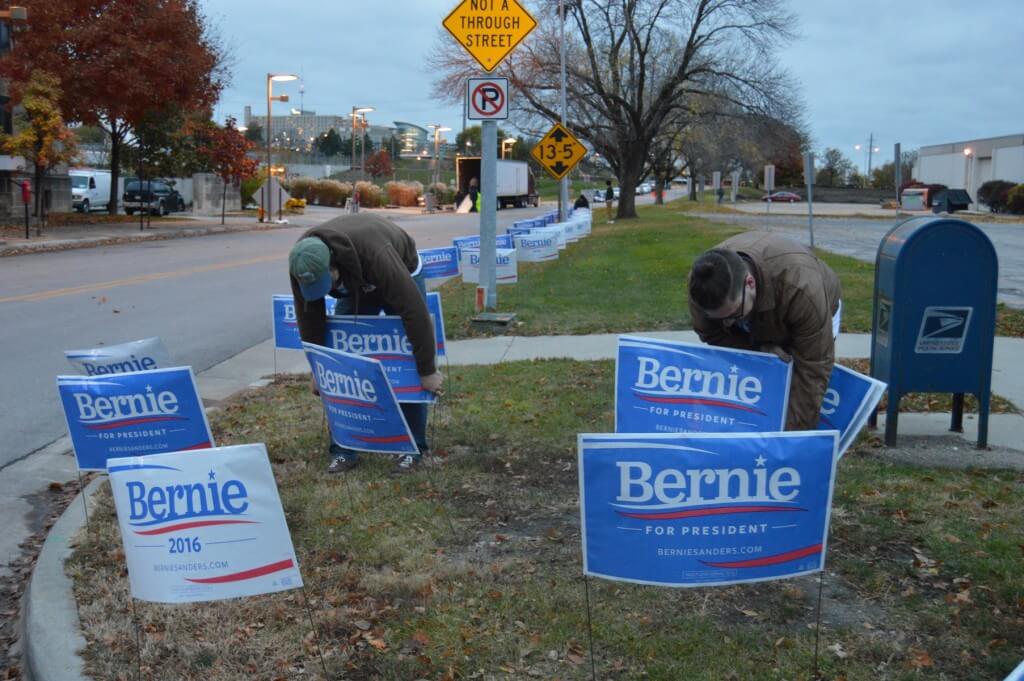 They also chalked the sidewalks along the route of the march. 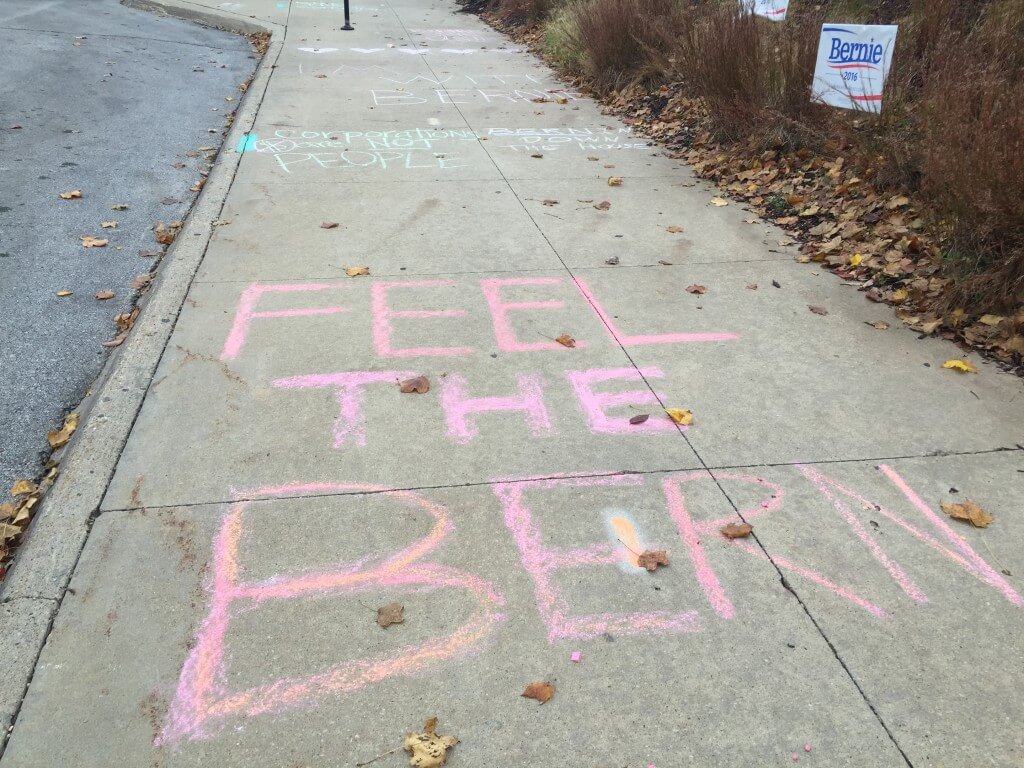 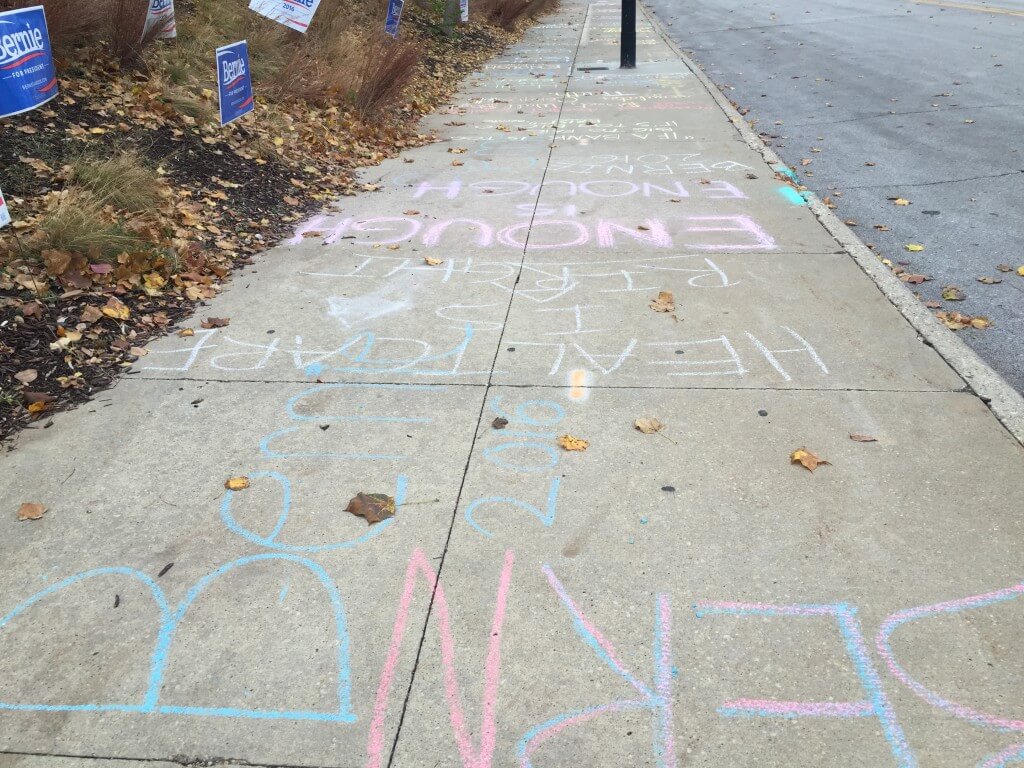 The Martin O’Malley campaign put up several “O’Malley” signs throughout the skywalks as well. By 9:00 am this morning, Starting Line didn’t see their team out and about yet. Their national team is all in town, however, and they’ve been preparing for a while, so we’ll update with more pictures when we see them later. 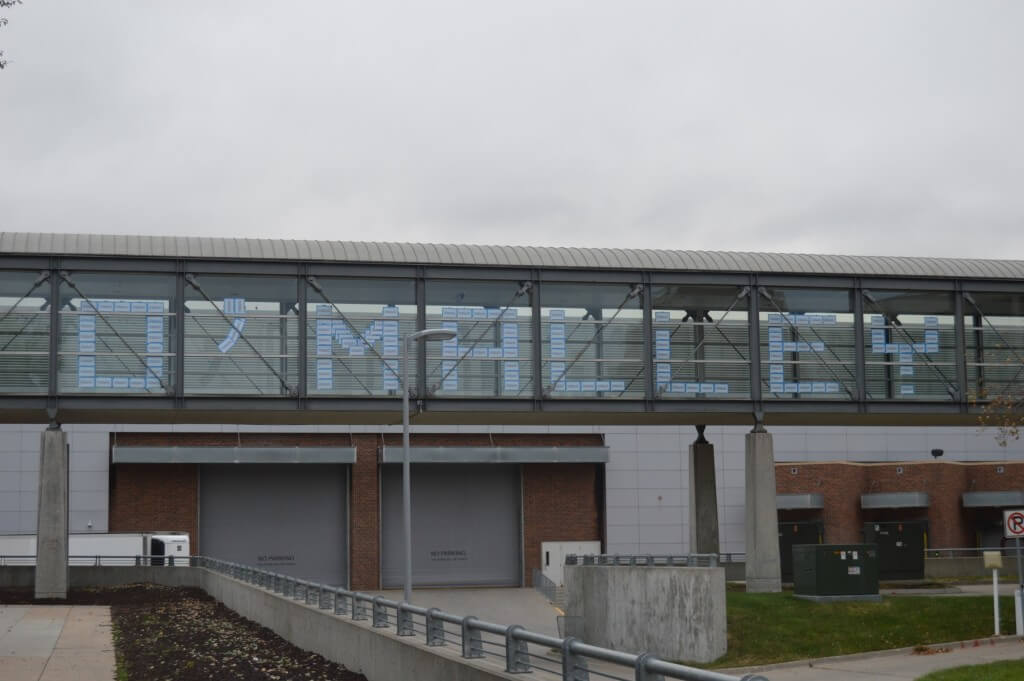 The Clinton team was out bright and early this morning, looking to secure 5th Avenue outside the event hall. They parked their cars up and down the streets, and reapplied paint to them this morning (after the rain last night washed off their designs). 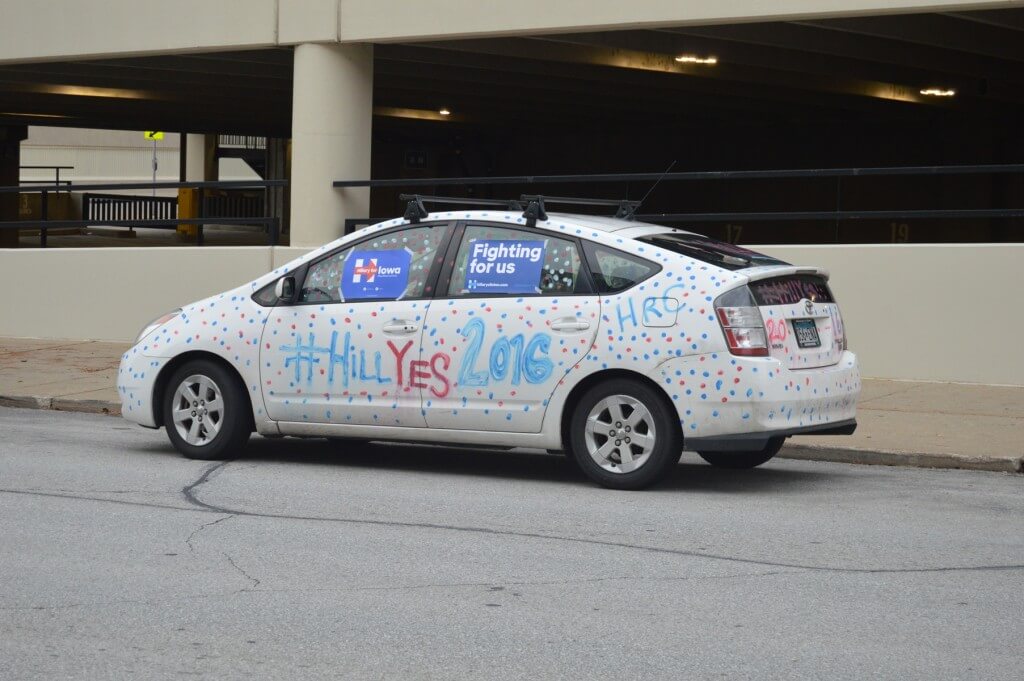 The staff lined up at 7:30 am to begin the honk-and-wave/cheering. 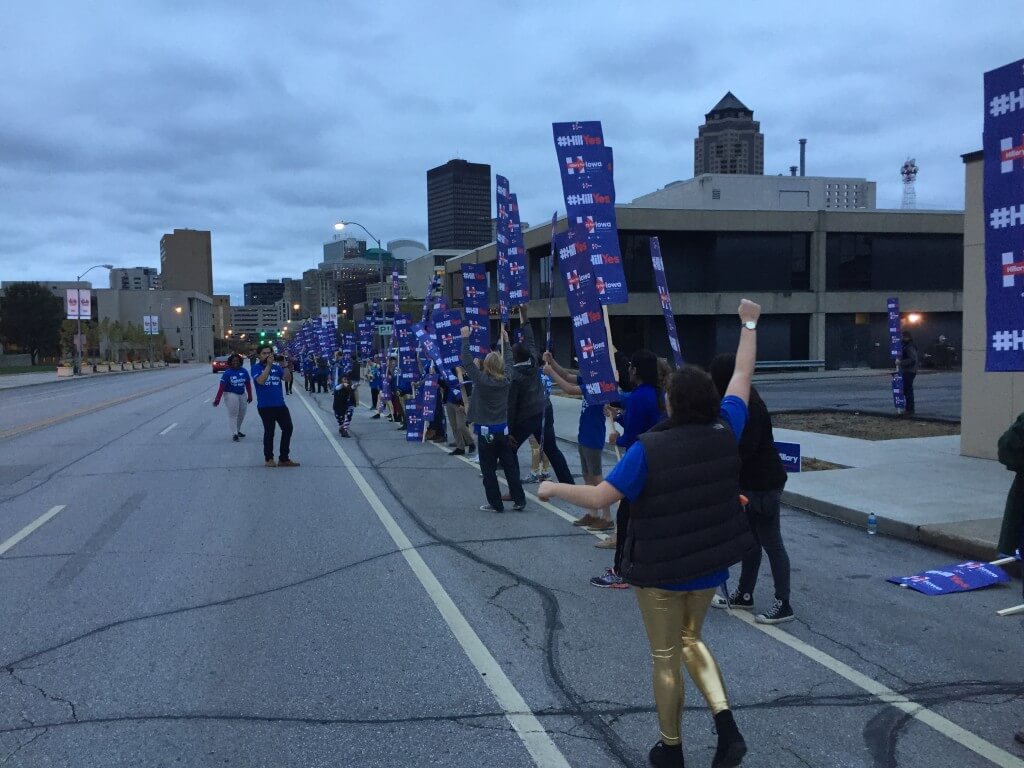 They lined the entirety of the street opposite Veterans Auditorium

.@HillaryforIA team out in force early at 7:30am… planning to cheer for as long as Hillary testified? #IACaucus pic.twitter.com/FSwjug5czI

The theme for Clinton tonight appears to be “She’s fighting for us,” with many shirts and signs sporting the slogan. 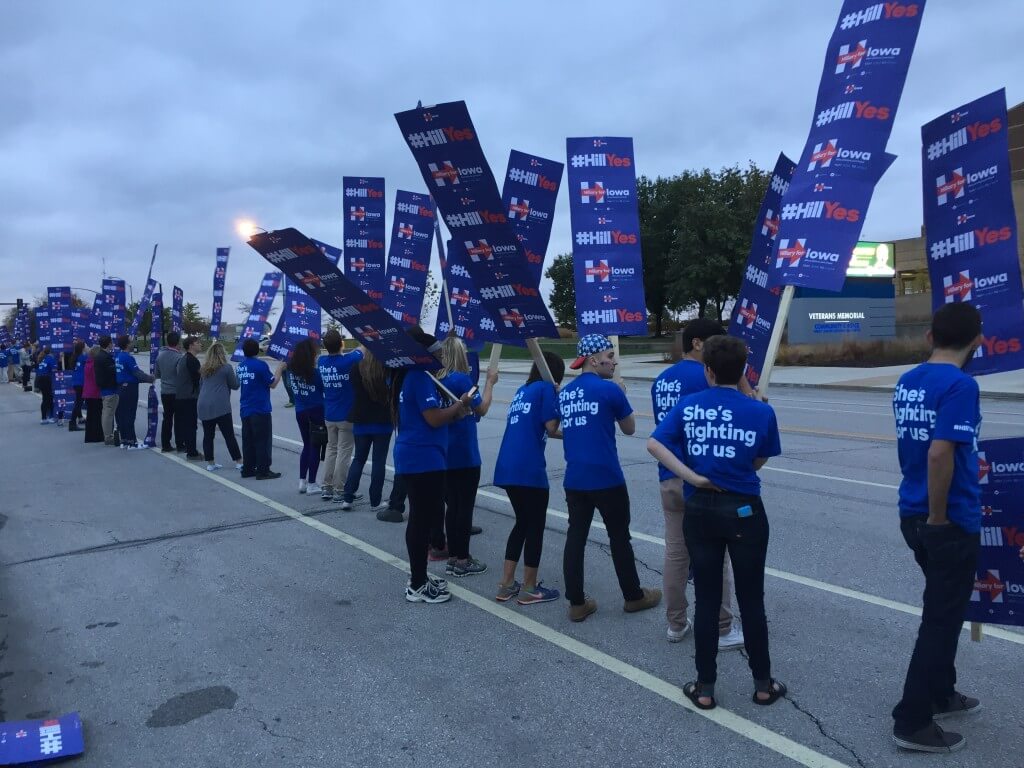 There was a guy with vuvuzela. And also an appearance by a Clinton staffer in a “Left Shark” costume, in honor of Katy Perry’s pre-JJ Dinner concert.

With Katy Perry in town for HRC, a Clinton organizer sports a "Left Shark" costume while chanting on the street. pic.twitter.com/Gc5JE7u9Y3

To keep their team motivated and moving, the Clinton folks have turned their visibility rally into a dance party.

There were no sightings of sad Chafee supporters.

Starting Line will keep you updated throughout the day on all the fun JJ Dinner activities, along with a big recap and analysis tomorrow morning. As always, make sure to follow us on Twitter to get live updates.