The countdown has begun! NBC reports Vice President Joe Biden will make a decision on a presidential run in the next 48 hours. I personally have been extremely skeptical of all the Biden rumor articles over the past three days. If you look closely at their sources and claims, it’s all pretty weak.

But whatever, as we await his decision or another delay, let’s think about the best, most awesome ways he could make his announcement. We’ve seen plenty of press releases and speeches this year to kick off a campaign, so I think Biden should shake it up some:

“The force is strong in you,” Kylo Ren says to a cloaked figure.

“And that’s no malarkey,” Biden replies, pushing back his hood and activating his lightsaber.

Cut to the typical Star Wars opening crawl, with a “Biden 2016” scrolling across a field of stars. The text below then lists Biden’s many accomplishments and lays out a 35-point plan of how he’d run the country. The trailer lasts two hours. 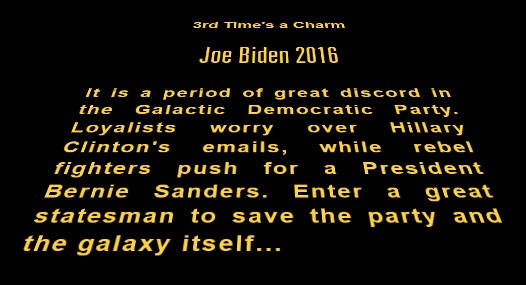 Take a page out of Hillary Clinton’s 2016 playbook and just hit the road for Iowa. Drive in a red corvette with the top down, rolling 20 deep with a bunch of bikers calling themselves “Biden’s Hells Angels,” with Biden’s “body man” wearing a Go Pro camera to capture the entire trip from DC. All the while jamming to classics of Springsteen’s Born To Run, Metallica’s Enter Sandman and Guns N’ Roses Welcome To The Jungle and many more. (credit to Christian Ucles for the idea)

Descend an escalator in the entrance to his announcement speech. Hey, it worked for Trump.

4. Roll Up On Hillary

No need for a big speech. Just drive up outside a Hillary Clinton event in an ’81 Trans Am, pull up in front of the press riser to say, “I’m in,” wink, and then drive off.

The Iowa Democratic Party’s big Jefferson-Jackson Dinner is this Saturday, with every Democratic candidate attending. Katy Perry is even making an appearance beforehand for Hillary Clinton, adding to the spectacle. What better way to make a splash than for Biden to have a surprise arrival? In fact, he could steal some of Perry’s stage equipment for his entrance.

“Thank you all for coming out tonight, we truly are a strong Democratic Party,” IDP chair Andy McGuire would begin to close the event out with. “Wait, one moment folks. I’m told we have a last-minute speaker. Ladies and gentlemen, please welcome to the stage Vice President Joeeeeeee Bidddddddennnn.”

Biden descends from the rafters on a shooting star to cheers and applause, touching down on center stage. Fireworks-emitting bra optional.

by Pat Rynard
Posted 10/19/15
See more of his work at http://greghauenstein.com/