He brings excitement. He brings energy. He understands the importance of retail politics in the first in the nation caucuses. His detail-oriented, goal-driven, and actions-over-words mentality gives me confidence that he is the right choice. Our country needs a fresh face and a new vision. That’s why I’m supporting former Maryland Governor Martin O’Malley for President.

At the age of 24, I am the youngest Democratic county chair in the state, less than half the age of the average chair. For more than four years, I have been politically active working for a labor union, a congressman’s reelection campaign, a US senator, numerous state senators, and knocked on thousands of doors on the campaign trail. I understand the importance of party building at the local level, and I believe Governor O’Malley holds those same goals and values for Iowa.

In 2014, Governor O’Malley came to Iowa to fundraise and support local candidates on the ballot. His PAC brought staff to help in the waning months of the election. I personally met one of the staffers. She was full of energy everyday, which by the end of October 2014, it was much needed. At the office before I got there and still there after I left. One of the hardest working individuals I met during the campaign. The help was much needed as Iowa, much like the nation, faced the lowest voter turnout in decades.

Governor O’Malley has visited the Hawkeye State more than almost any other candidate on either side of the aisle. While I’ve heard Senator Sanders and Secretary Clinton once or twice each, I’ve seen Governor O’Malley nearly a dozen times. Each and every time, he leaves plenty of time for Q&A, a time for Iowans to ask him the hard questions, and makes a point to take every question. At the end, he takes the time to shake every hand and meet every local democrat in the room. He appreciates that every Iowa vote matters in this caucus and takes nothing for granted. 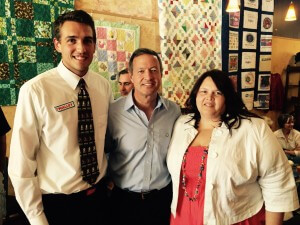 When I made my endorsement public, the first question I was asked was why am I  supporting Martin O’Malley over one of the two candidates leading in the polls? Governor O’Malley alone brings 15 years of executive experience and a record of getting things done to the table. In Maryland, he passed marriage equality, made public schools number one for five years in a row and worked across the aisle to pass important legislation and actually get things done. That’s the type of candidate I want as my president. Someone committed to actions, not words.

I’m a first generation college student from a middle class family. My dad was a union member working in a factory for 20 years. Since graduating college last year, I accumulated more than $75,000 in student loan debt, well over half of that private loans with interest rates as high as 10.49%. Many young adults in Iowa and across this country come from similar backgrounds.  And Governor O’Malley understands the needs and concerns that we have. He took on both of his daughter’s student loan debt, and earlier this summer, rolled out a plan to tackle the crushing weight of higher education costs. He too comes from a middle class family, and spent the last 15 years fighting for middle class families across Maryland.

On policy, Governor O’Malley has rolled out the most in-depth policy papers, from combating climate change, to reducing unemployment among young adults. His 15-goal strategy brings the most critical issues of our society to the forefront, most of which has been ignored by other candidates, including eradicating childhood hunger to reducing deaths by drug overdoses to criminal justice reform, ensuring fairness in sentencing and reducing recidivism. 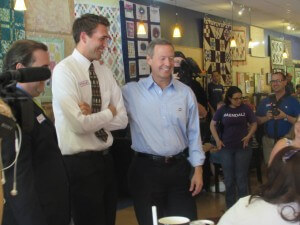 I have a dear friend, aged 91 years young, who only wants the best for the party and wants to make sure it’s in good hands for decades to come. The day I became the youngest Democratic county chair in the state, she personally welcomed me and wished more young people got active. That’s why I’m a Democrat and why I’m active. I care about this country and its future, just as much as my friend.

In 2014 I knocked on nearly 10,000 doors and put 17,000 miles on my car. Many strong activists in Central Iowa support Governor O’Malley, and I’m glad to be one of them. This lifelong Iowan will battle the blizzards and will work hard, because I trust Governor O’Malley and his vision of New Leadership.

So when you caucus in February next year, I want you to make a well-informed and educated decision. I want you to look hard at your candidate. Not only do I trust Governor O’Malley to lead this country forward, I believe he is the best DEMOCRATIC candidate in this race. He wants Democrats to win up and down the ticket next fall, and I want to make sure he’s at the top.