Kate Gronstal sat at her parents’ house, devastated and crying, when her phone rang. Kate was in no condition to be taking calls, but her mother answered and quickly brought it over.

“You need to take this,” Connie Gronstal insisted, and handed the phone to her daughter.

On the line was Vice President Joe Biden, calling to give his condolences over the sudden death of Kate’s husband, Dennis. The day before Kate had returned home from a trip to see friends in Chicago and quickly became worried when Dennis wasn’t at the airport to pick her up. Connie swung by their house where she discovered that Dennis had passed away.

Biden had been informed about the Gronstal’s loss by one of his staffers and reached out immediately, doing his best to find words of comfort and advice for someone who now also knew the heartbreak of losing a young spouse. It was not the first time Biden had connected on a very personal level with the Gronstals, nor was it the last.

Biden’s close relationship with one of Iowa Democrats’ most well-known families is not necessarily a unique one in the country, as both Kate and Connie note they know of many others who have been comforted in difficult times by the Vice President. But that’s part of what makes Biden so special in American politics, and why his interactions with the Gronstals in their time of tragedy serves as a particularly compelling insight into the man who may yet run once more for President. Starting Line spoke with Kate and Connie Gronstal this last week to share that story.

Senate Majority Leader Mike Gronstal and Connie have known Joe Biden for years, dating back to his first run for President in the 1988 election, but he became particularly close with their family in 2007 during his campaign that year. The Gronstals hosted him for a meet-and-greet at their house in Council Bluffs that summer, where Kate introduced him. As Biden mixed and mingled with the crowd of local activists, he stopped and took a particular interest in Catherine, Connie’s mother and Kate’s grandmother.

“So do you think you might run for President?” Catherine questioned Biden (who had announced several months back), as the family stood back and quietly chuckled.

“You know, Catherine, I think we had a pretty good turnout tonight, I think we might,” Biden replied with a smile.

“You remind me of my mother,” Biden said as he leaned in and touched her arm. “She’s about your age.”

“Oh, how old is she?” Catherine asked.

“Apparently every really year matters,” Kate Gronstal joked as she recalled the story. “Almost like a little kid, every year is a really big deal.”

The interaction apparently made a mark on Biden (and Connie thinks the comparison to his mother was genuine, as she noticed similarities herself when she watched Biden’s mother speak at the DNC Convention in 2008). He had a staffer hand-deliver a signed photo they all took together at the house party to Catherine, along with flowers. Kate noted her grandmother took the picture around with her often to show her friends at lunch. 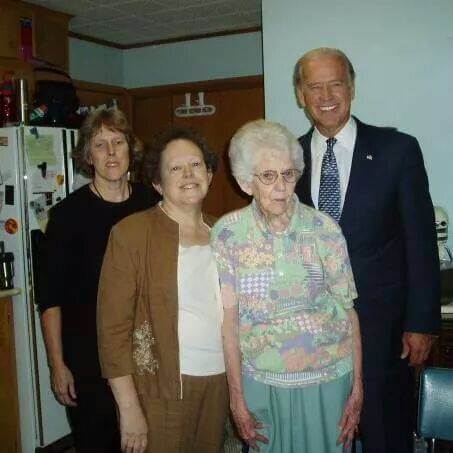 Kate and Connie saw Biden again at a campaign event in Sioux City during the 2012 campaign. At that point Catherine was in an assisted living facility. When the family moved her in, they had brought the Biden photo with them, but were surprised when they checked in with her before Biden’s visit that she’d put it away.

“Tell him hi for me,” she told Kate and Connie before they left for the Vice President’s event, saying it in a way like they were old friends.

Biden didn’t need to be prompted, however, asking the Gronstals how Catherine was doing right off the bat when he saw them. He meant to call her from the event, but got pulled away to talk to other attendees.

Catherine passed away about two months after the Sioux City event. Word of her passing didn’t get to Biden until about two weeks afterward, but as soon as he heard he gave Connie a call.

“We talked for about 45 minutes about losing people, deaths in his family, and he said, ‘no one called me when Catherine died,'” Connie recalls. “And I wondered, what, I’m going to call the Vice President when my mother dies?”

“I can count on my hand the number of people I have felt as strong of a connection to as with your mother,” Kate remembers Biden saying, who insisted he should have driven down to see her or called more often.

The call came quicker after Kate’s husband’s death. Kate and Dennis had been together about three years and married for a year and a half when Dennis unexpectedly died from a sudden bout of pancreatitis. Kate says she doesn’t remember much of the details of their conversation in the difficult day after the tragedy, but recalls the real concern and empathy the Vice President showed for her.

“I think he just wanted me to know how much he cared about me, and anything he could do to make things better – he wanted to be there,” Kate says, noting he gave her both his aide’s and personal phone number for her to reach out on at any time.

“The thing [he said] I really come back to the most, is there will come a point in time where you remember something and you smile before you start to cry, and that’s when you know you’re going to make it,” Kate says. “It may take a long time, but that moment will come, and that’s something I come back to a lot, and I share it with others when they lose someone.”

That advice likely sounds familiar to those who follow Biden closely, and Kate sees that as part of his authenticity, pointing to his emotional appearance on Stephen Colbert’s show.

“If you saw that interview, that’s what he’s like in person – there’s no difference,” she says.

Kate never did ring up Biden, which he gently chastised her for not doing so when they saw each other at the Inauguration in 2013. He still keeps in touch, and usually calls her before he visits Chicago, where Kate lives now. She got to see him again in person one of the last times he was there, talking for a while about moving forward and when you know you’re ready to try dating again.

What They’ve Learned About Joe

“You think of him as Joe,” Connie says of their relationship with Biden. “He’s become a friend rather than just a candidate. Most of the time any other candidate that’s ever been here, they’re with you when they’re here, and then if they’ve made it to DC or not, you are not on their radar anymore.”

Both Connie and Kate say they’ve never seen that kind of ability to connect from any other presidential candidate, and even only a few state and local ones as well. They also realize they’re not the only ones who have seen this side of Biden. 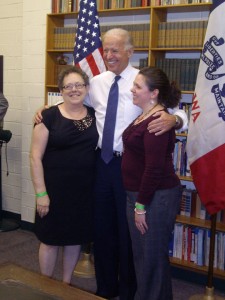 “It’s not just my relationship with Joe Biden, but it’s there’s so many people across the country that have the same relationship with him,” Kate says. “I’m not unique, the only person who has this experience. That’s what’s truly amazing about it – how many thousands of people does someone come into contact with, finding a way to connect with people and truly care about how people are doing.

“There’s also something to truly understanding grief,” she adds. “That’s something in this country I don’t think we deal with very well. It’s really admirable to see someone who is able to discuss it and bring it to a forefront in such a public way.”

As Joe Biden continues to weigh his options on a presidential run, many wonder if he’s fully emotionally prepared for a campaign after his son Beau passed away at the end of May. His timetable to decide seems to get pushed back every week, and the first Democratic debate will be held tomorrow. But Kate views that hesitancy as an admirable part of his overall personality.

“It’s amazing that there’s a politician at [his] level who can be honest enough to say that I have to be 100% ready in order to be able to commit to doing this,” Kate says. “It’s a real thoughtfulness that he’s taking to make sure he can do the job … Everyone should not only respect that but be really grateful that there’s an elected official who’s willing to take that step back.”

Even through his incredible grief this year, Kate notes the Vice President has still stayed hard at work.

“We all do it, all of us who are grieving – it seems like a miracle at times to put one foot in front of the other,” she says. “But he’s continued to not only move forward but continue to fight for veterans and working families and continued to push on reducing sexual assault on college campuses.”

Connie believes he’s shown plenty of times before that he has the emotional stamina to push through these times, but understands the difficulty.

Were he to get in the race, the authenticity and basic human decency that the Gronstals have seen in Biden would serve his campaign well, but, more importantly, it might help Democrats better connect with voters on the issues.

“He gets it on a human level,” Kate argues. “We talk a lot about policy, which is what we want – but we really want someone who understands how those things directly impact people’s lives … I feel like there’s a connection that sometimes gets missed, the general public hears all these policies and strategies … that connection needs to be made to individual people and the impact it has in their lives.”

The final decision ought to come soon. But as with many things in life, personal ambition and political careers don’t matter as much as your own personal well-being. That’s the part of Biden’s life Kate hopes he finds peace with.

“I don’t know how I could possibly help him in the way that he helped me,” Kate says of Biden’s loss with Beau, noting his passing was very emotional for her even though she didn’t know Biden’s son well. “I wish there was something I could do that would really help him in the same way. The only real way I could do that is to do what he did for me and for other people. All the things I’m going to say to him he’s heard, so I really try to pass it forward.”

Passing that help forward is what Biden told Kate he has long felt a calling to do. So many people came together to help him through his moments of personal tragedy that he wanted to serve as that pillar of strength and advice for others in need. That same calling has certainly spread to Kate now too, as well as likely the many thousands of others Biden has connected with over the years. So whether Joe Biden runs for President or not, he has already accomplished that.