Few other presidential candidates’ campaign events are as stage-managed as Ted Cruz’s. Fancy backdrops, dozens of volunteers in matching t-shirts to welcome you, well-produced introductory videos and free pocket constitutions are present at nearly every Cruz event in Iowa. And the best piece of campaign chum you’ll find when you go see Cruz in person? The professional children’s coloring book produced by his campaign.

Now, to be clear, I think having a coloring book to hand out to children is actually a good idea for candidates like Cruz who are appealing to the evangelical set. You see lots of families with young kids out at his events, so it makes sense to give something to occupy the little ones while Cruz gives his trademark hour-long, over-the-top orations.

But the coloring book itself? Boy, it’s something else. 30 pages in length and produced by a professional children’s coloring book company, one can only imagine how much money they spent on this. The pictures themselves are, uh, pretty interesting. So let’s take a look at some of the best pages in the Cruz campaign’s coloring book and have some fun adding a little commentary of our own to the illustrations.

OK, right off the bat we’re spelling things wrong on the cover. 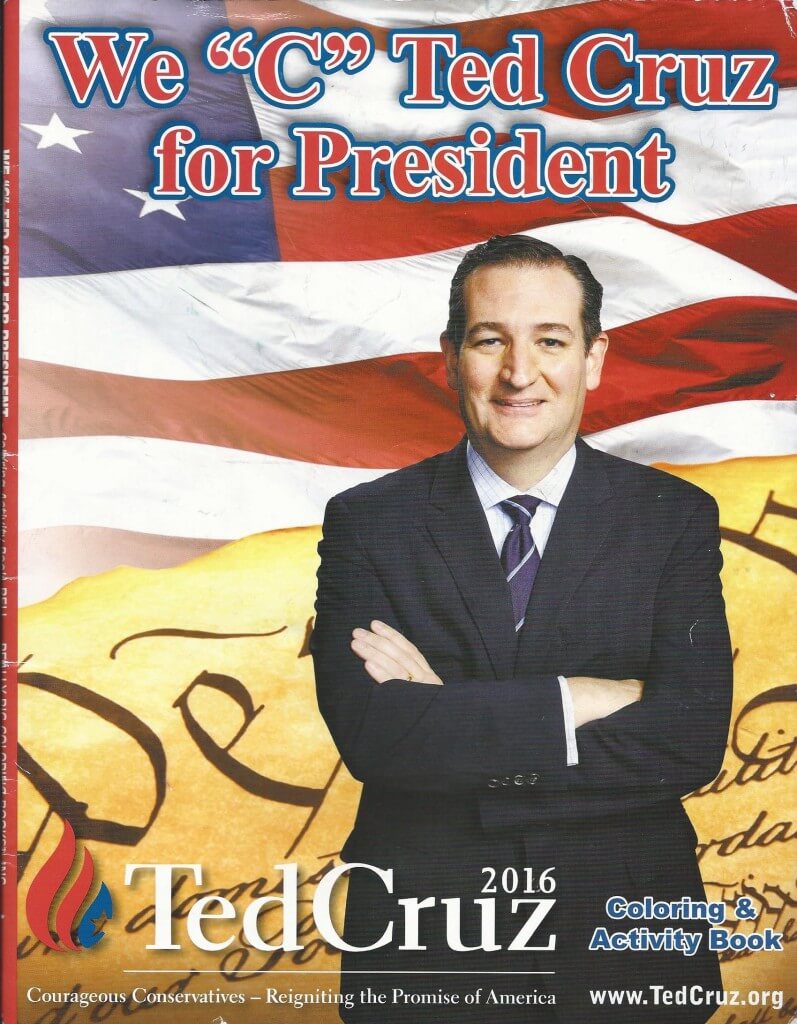 “This Bus Makes Right Turns Only.” So you just drive around in circles then? 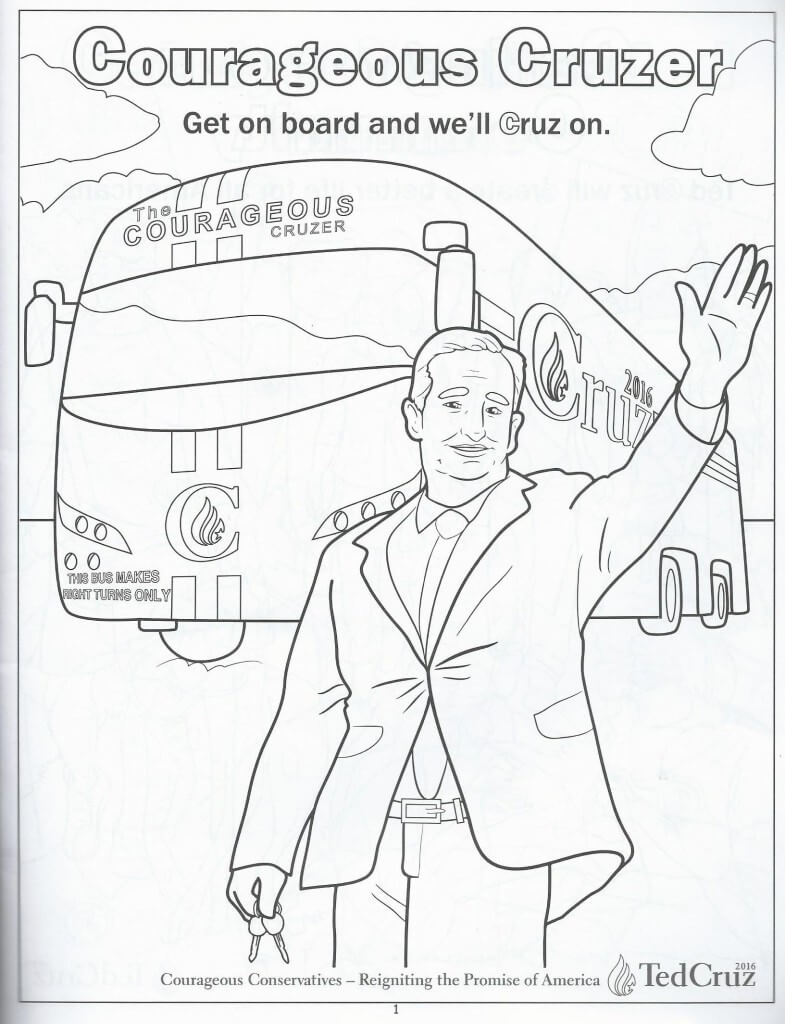 Looks like the guy is praying as he holds his girlfriend’s hand. Probably asking forgiveness for this lustful sin. 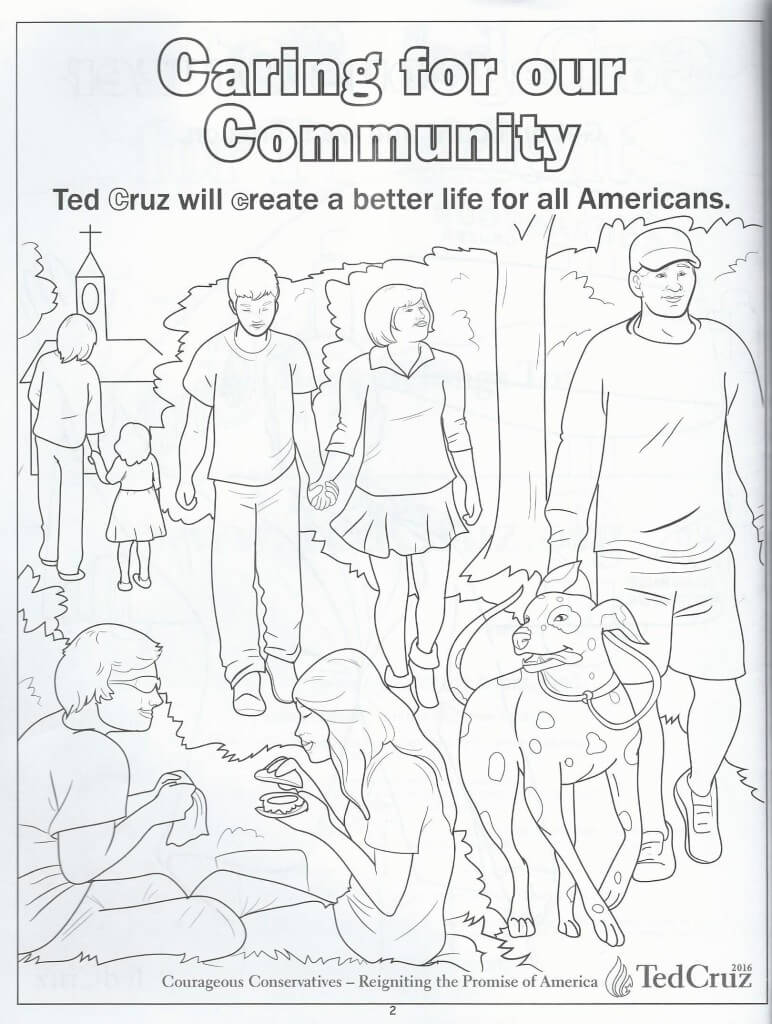 Uh oh, careful Ted. There’s that “Change” word conservatives don’t like. “Catalyst” is OK, though, sounds like something is going to explode. 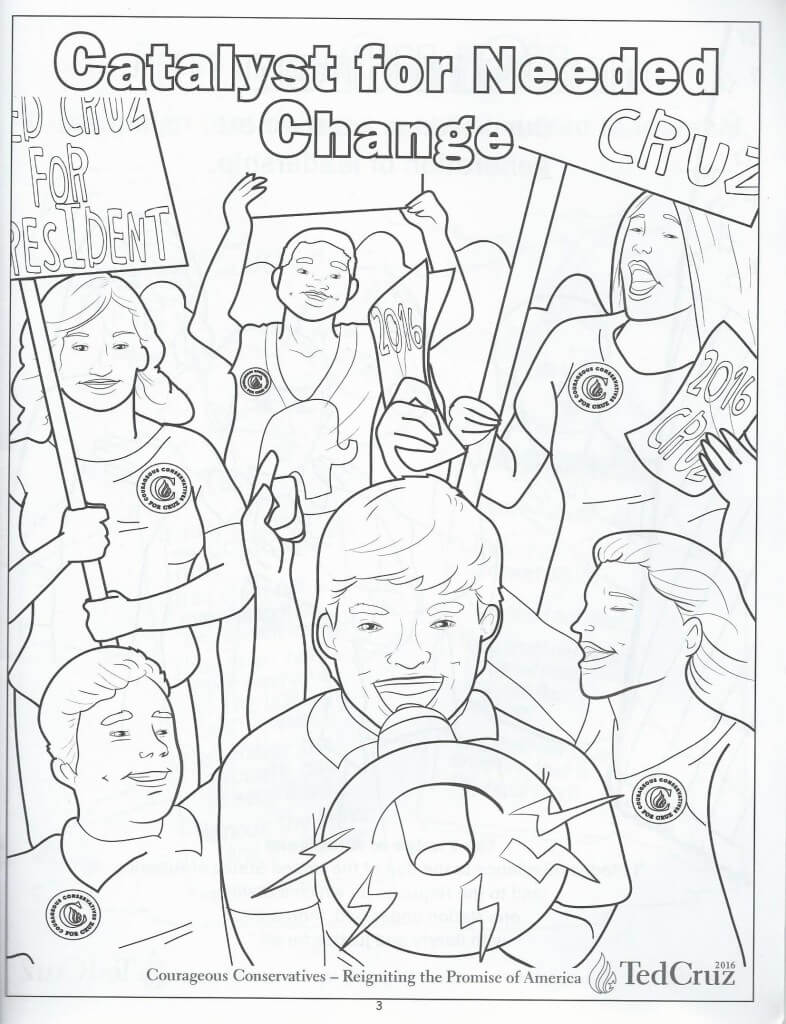 Surprised they didn’t all-caps the “under God” part of the pledge here. 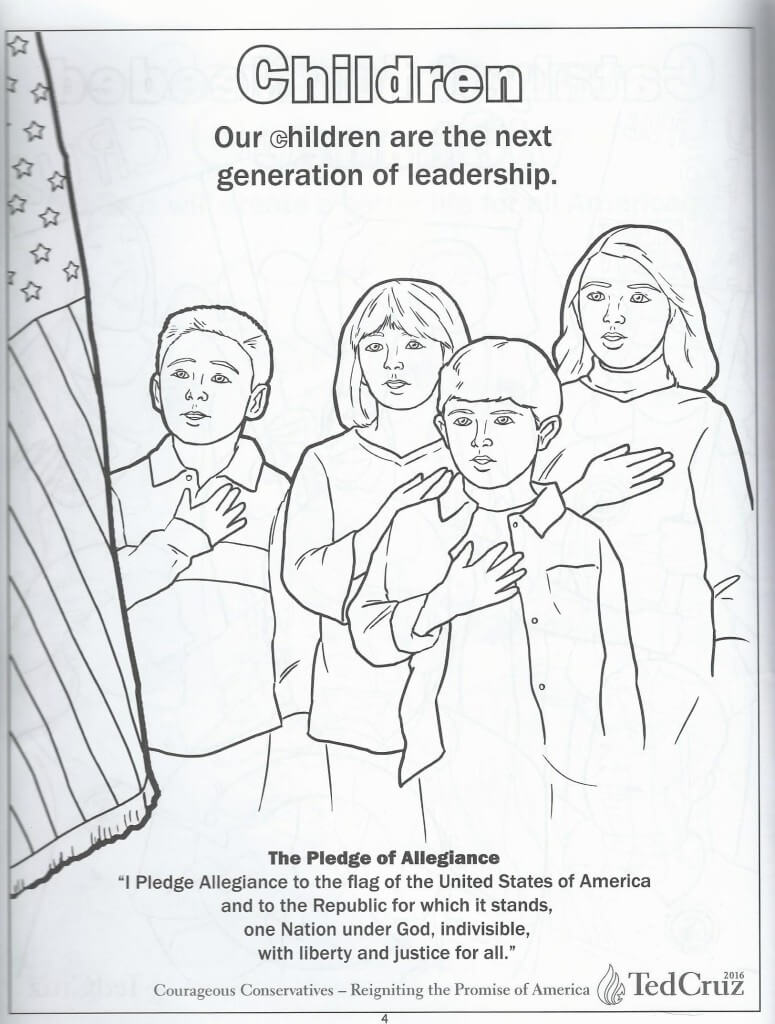 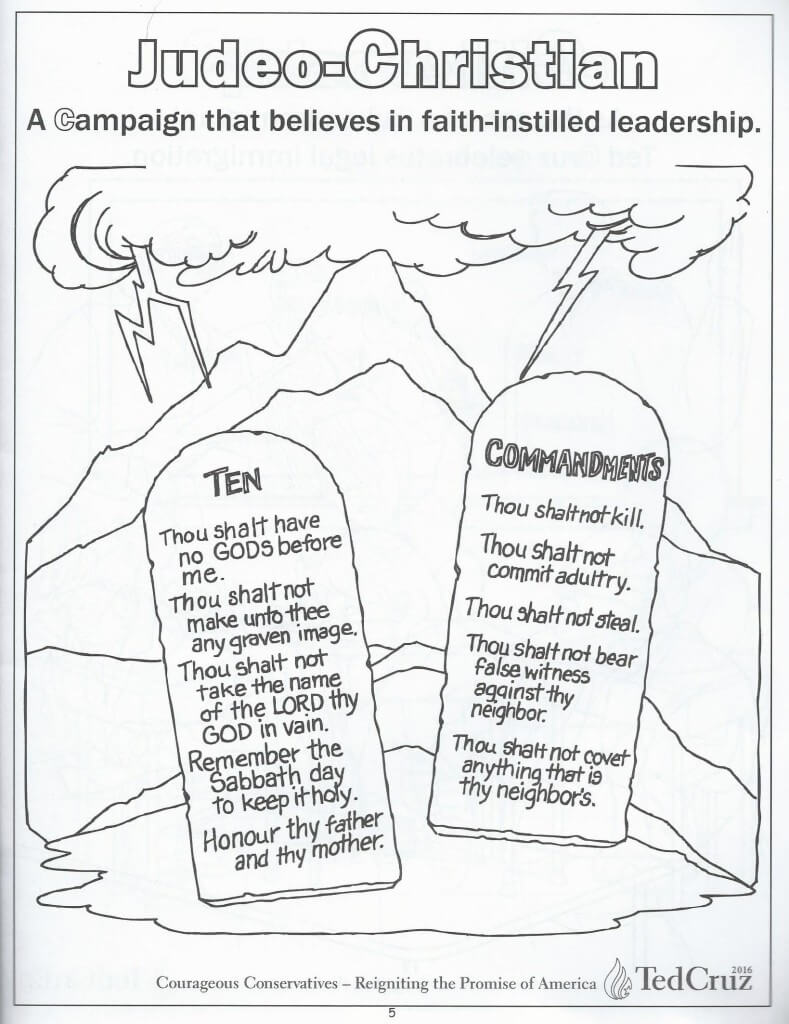 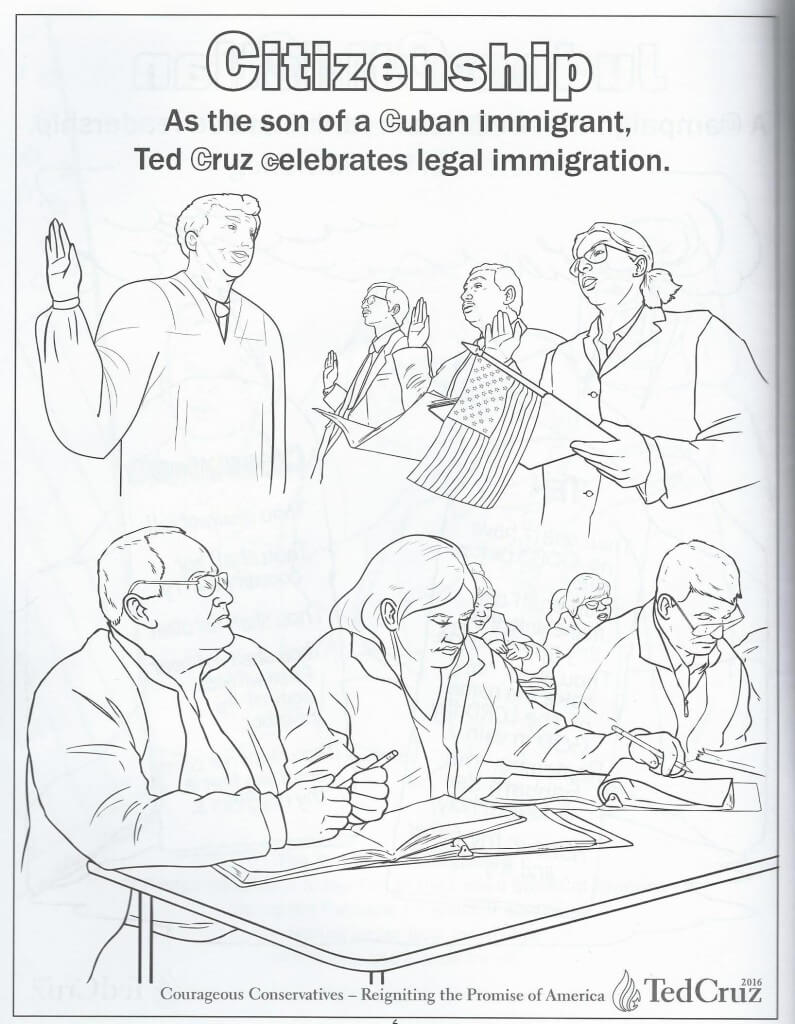 And here we see a depiction of Ted Cruz as a child, preparing to become a future maniacal, iron-fisted dictator. 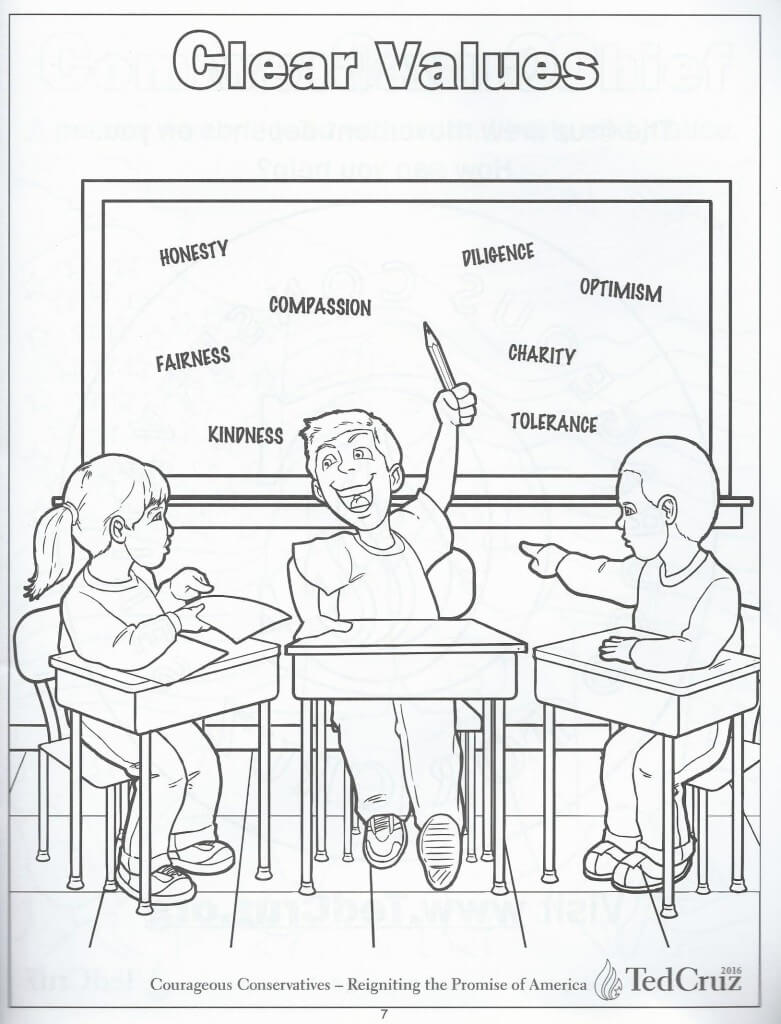 Some of these illustrations aren’t doing Cruz any favors – he’s actually slimmer than this in real life. 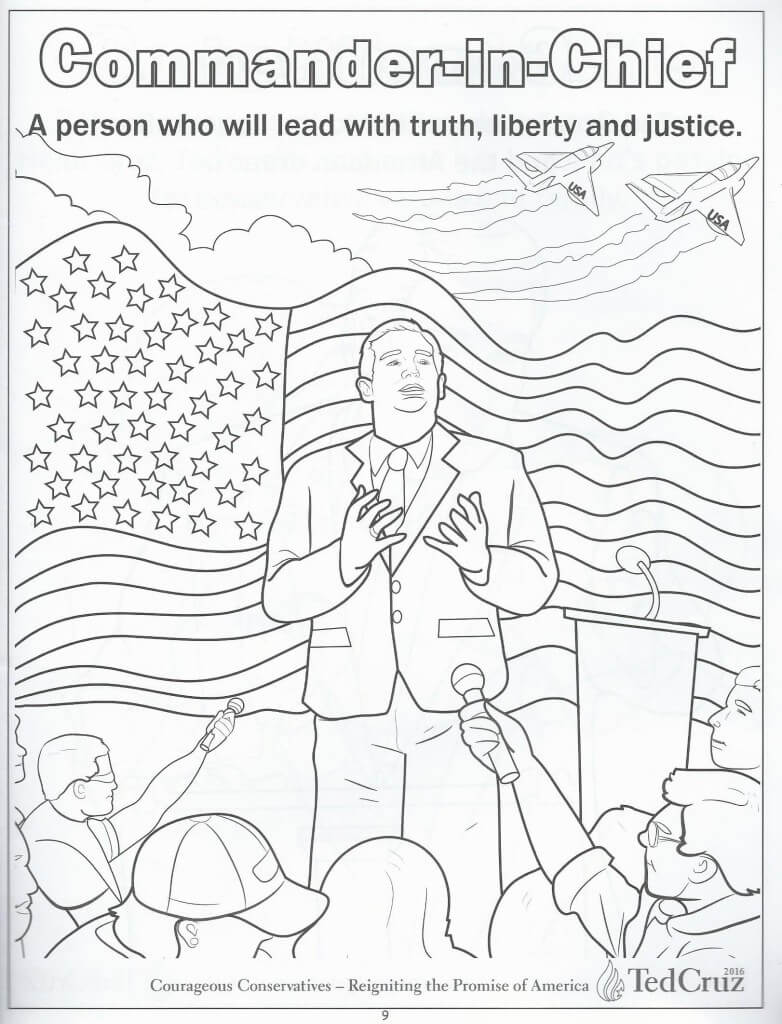 Why are you pointing to YOUR LEFT, TED??? SOCIALIST MUCH??? 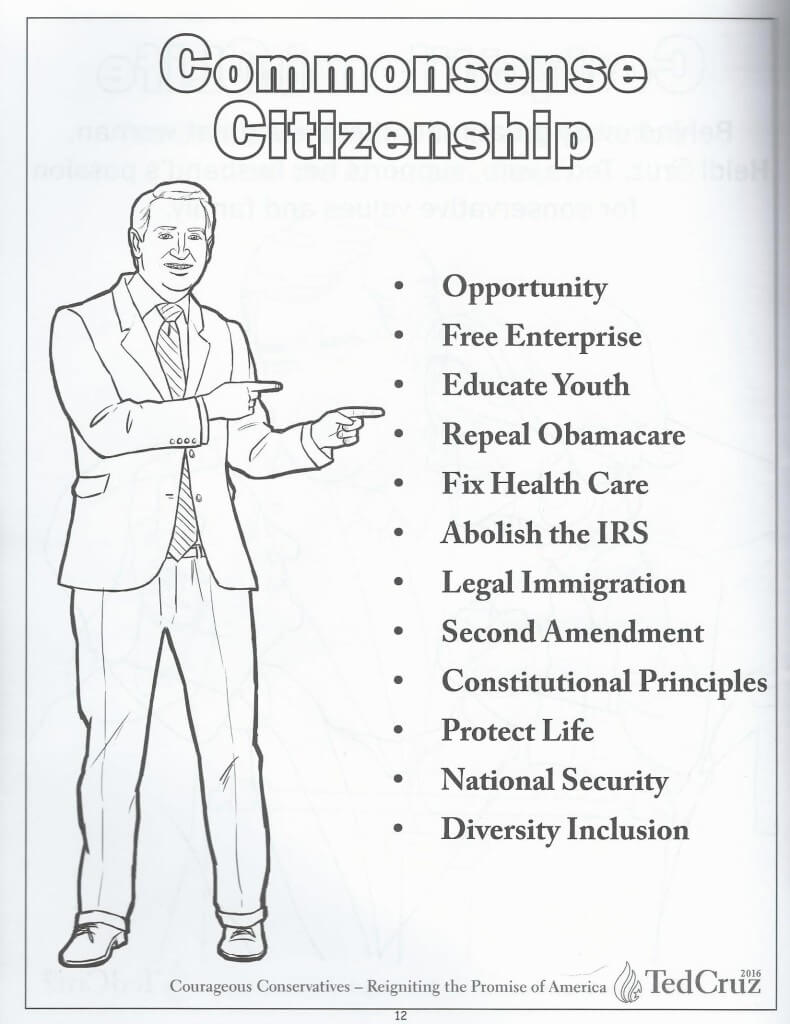 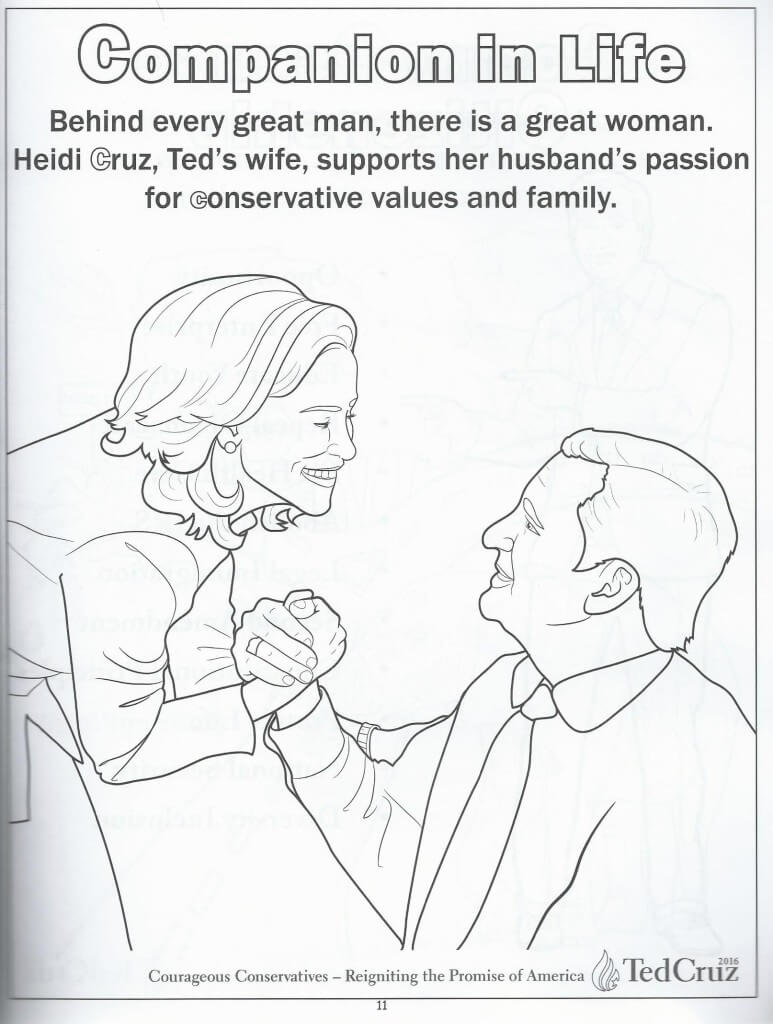 What… what is even going on in this picture? I suppose it’s nice that he seems to care about the nation’s crumbling infrastructure in this one. 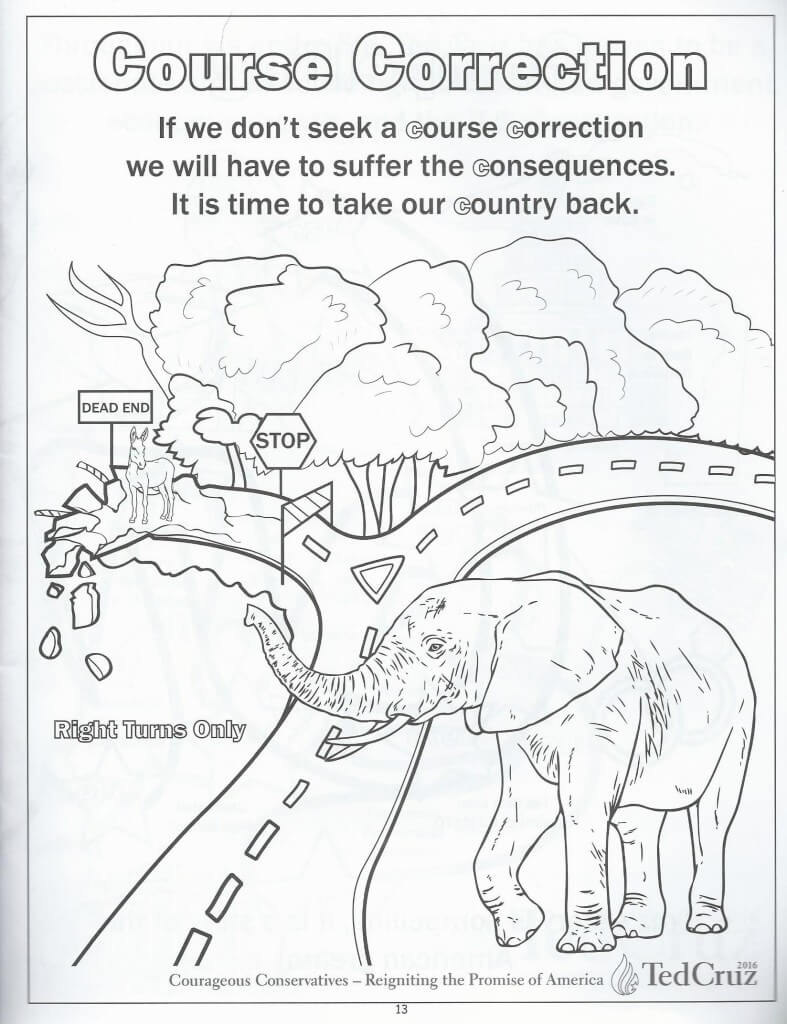 Whoa, way too much reading. 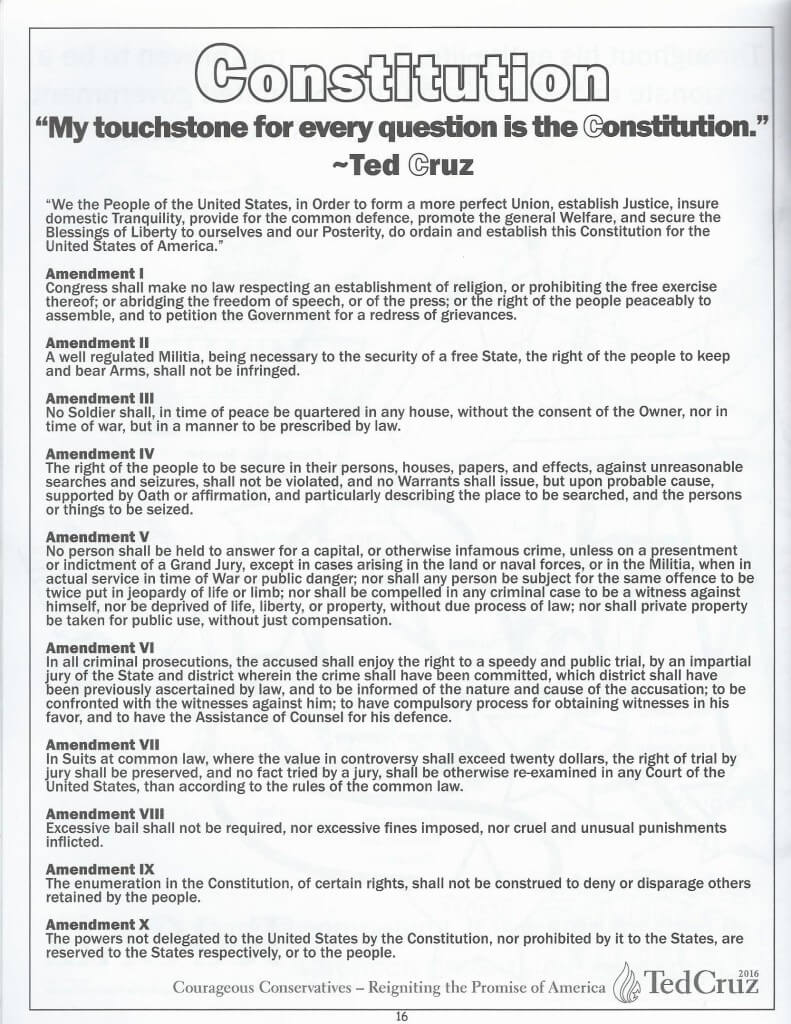 Answer key on the same page? You teach kids dependency like this early on, they’ll just want “free stuff” from the government. 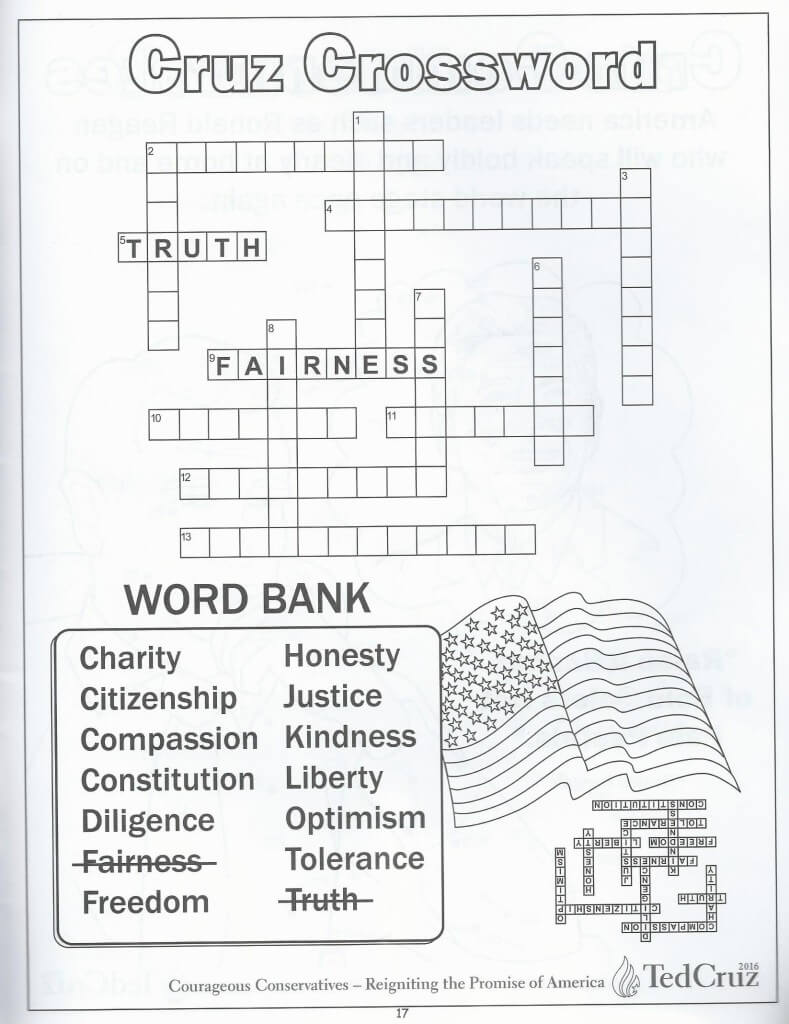 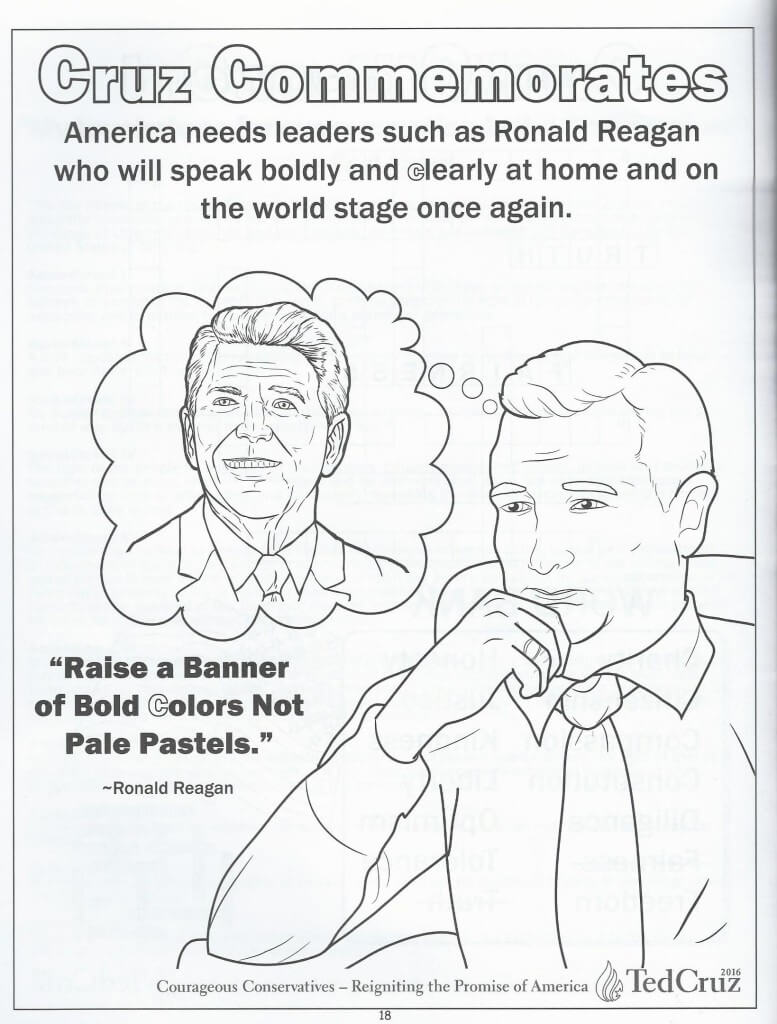 Connect the dots to discover Hillary Clinton’s real involvement in the Benghazi attacks. 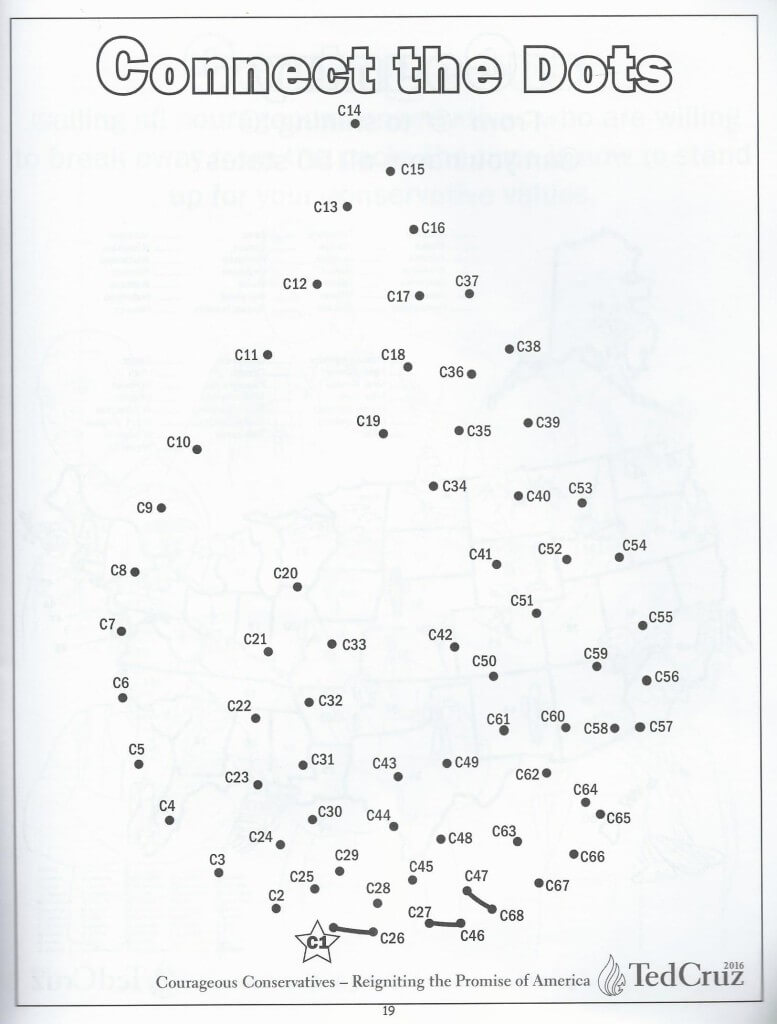 Accurately portrays Cruz’s allegiance to the oil industry from his home state. 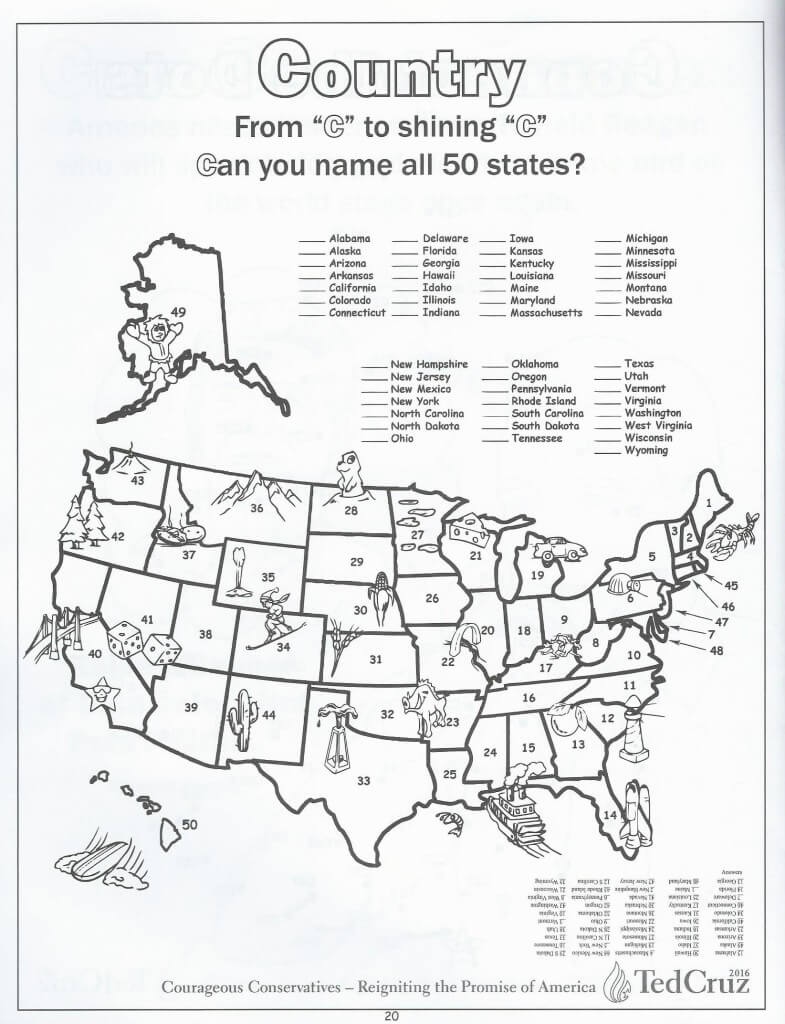 Ted Cruz’s policies would literally lay off or cut the wages of five of these six professions. 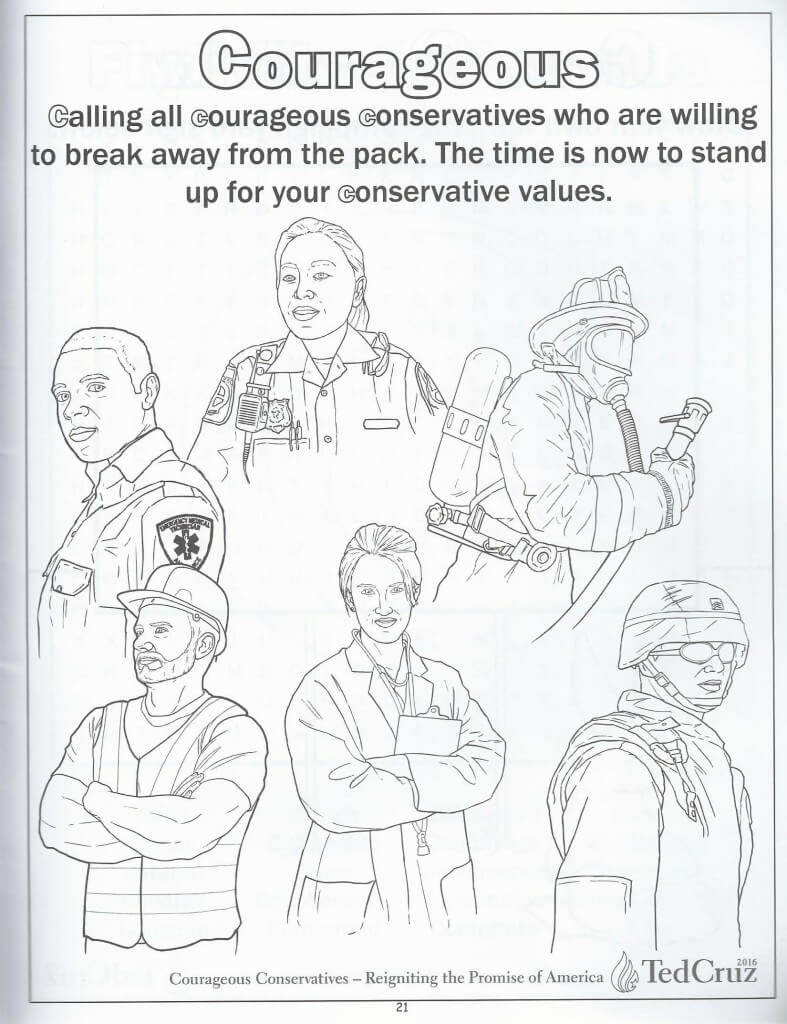 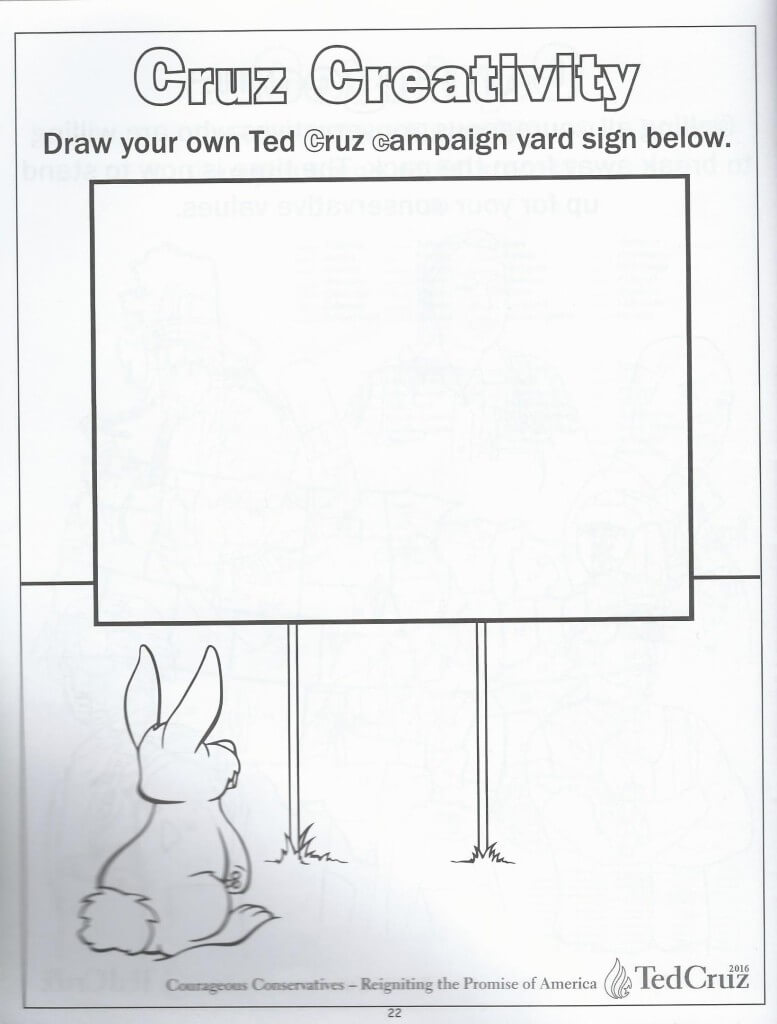 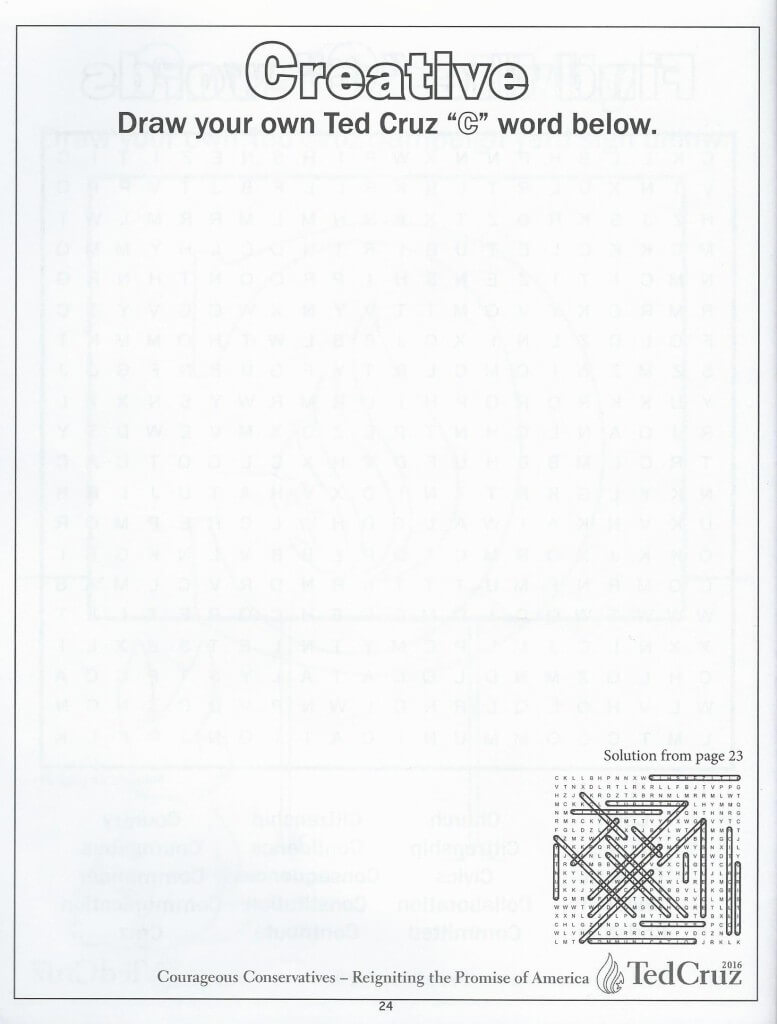 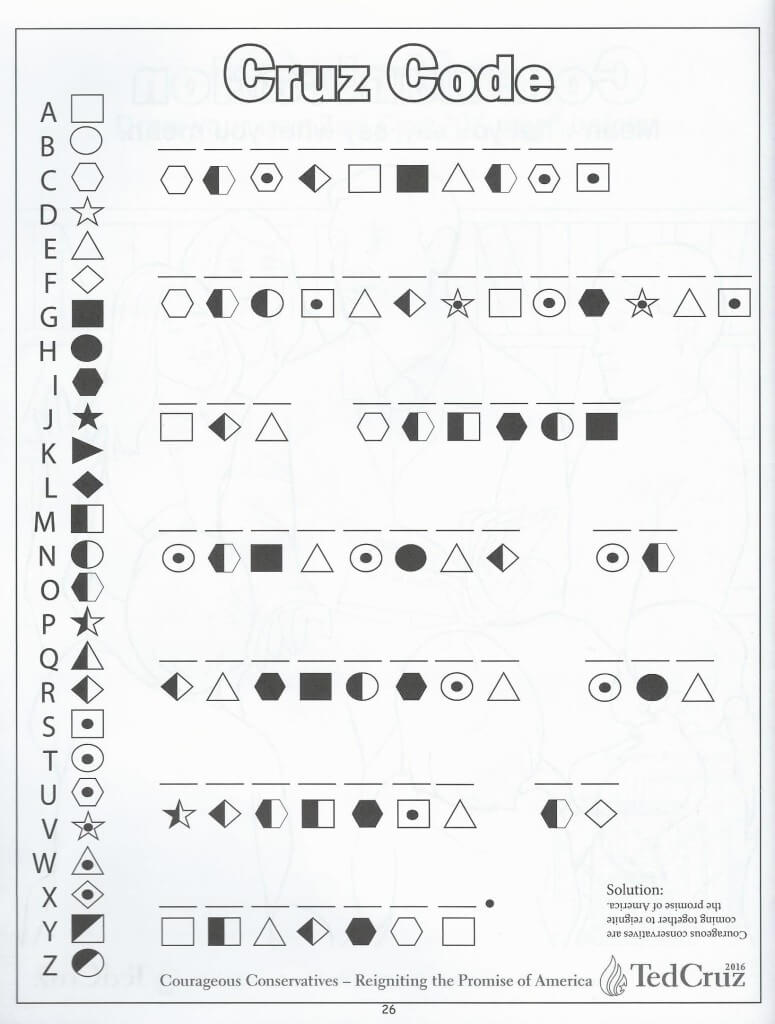 Isn’t this a logic analogy, not a math problem? Must be some new Common Core thing. 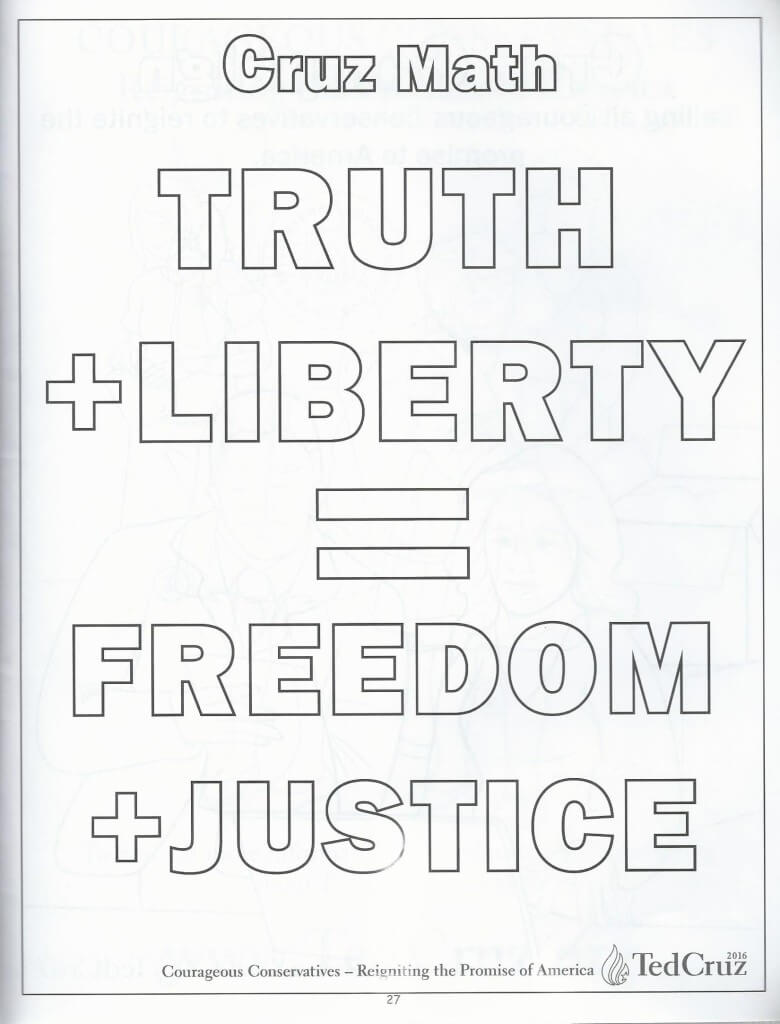 The only thing in those boxes are more coloring books. It is literally the only thing their campaign has spent money on. 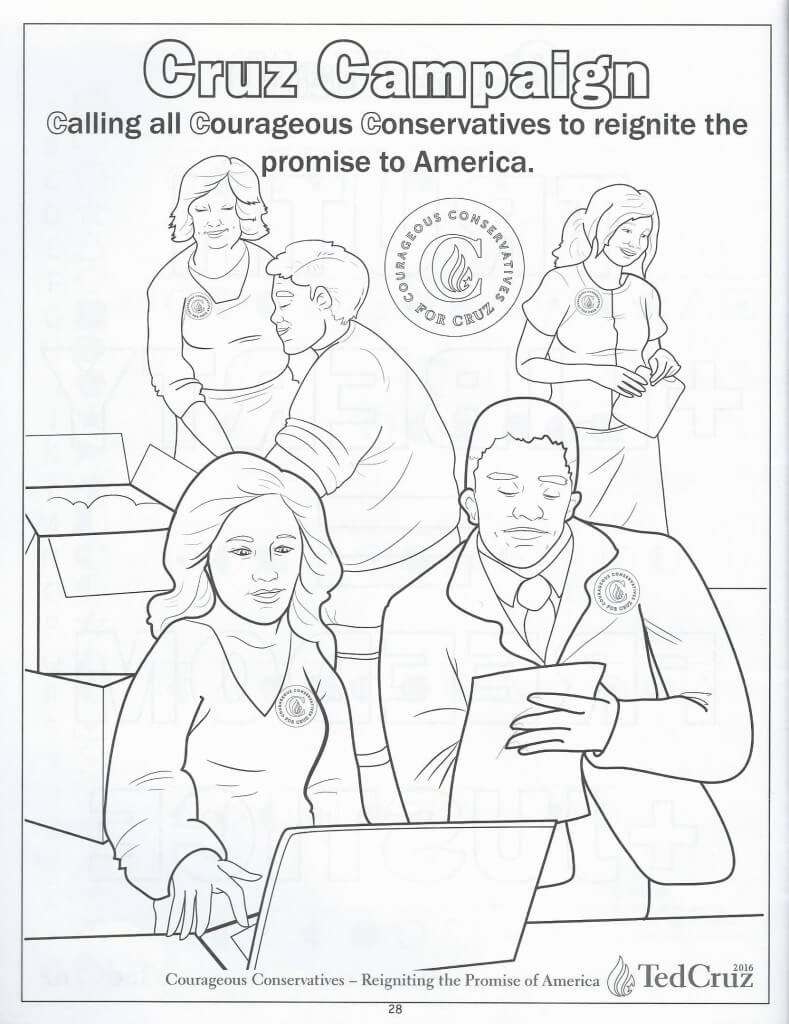 Alright, his daughters are pretty cute. We’ll end on a nice one. 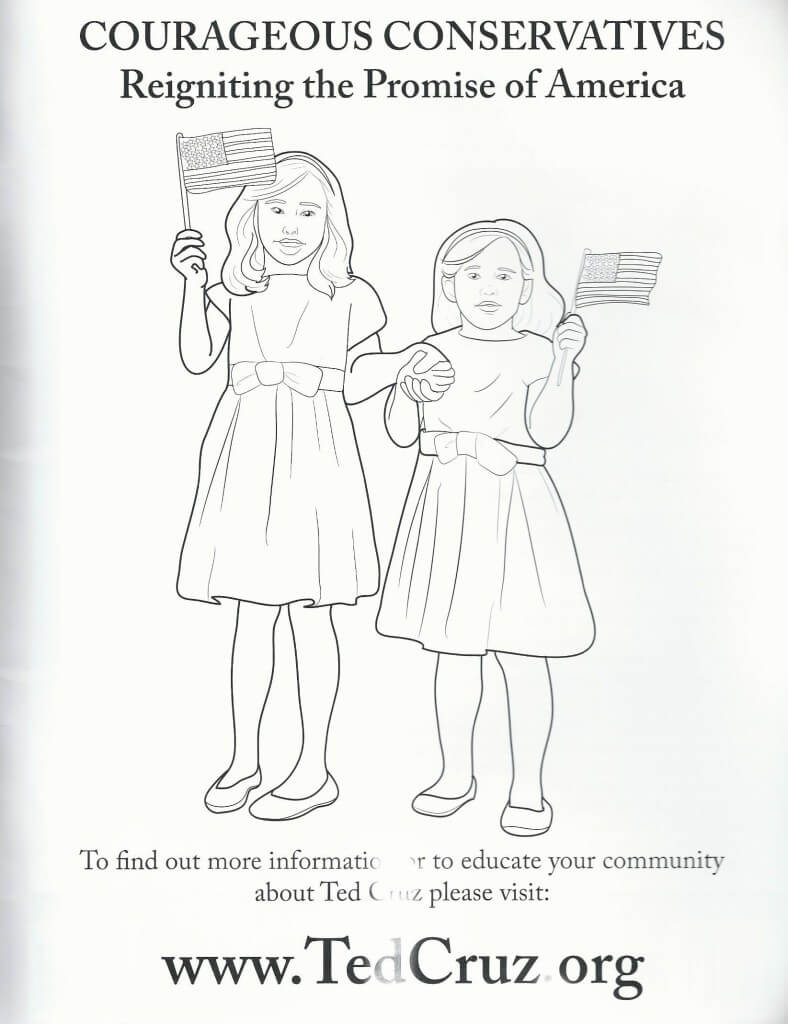