Endorsements are a complicated issue. For one thing, there is always an open question about if endorsements matter. (Is anyone really swayed by the fact that Lil B has endorsed Bernie Sanders?) Additionally, there is a concern about why someone would choose to endorse; if there’s quid involved for the quo. In Iowa, these concerns have only grown over the last few years as Rand Paul acolytes are still being indicted for the great Kent Sorenson capper of 2011. (In 2011, then state senator Sorenson decided to abandon the sinking Bachmann campaign for the greener pastures – and greener pay checks – of the well-funded Ron Paul campaign, and those involved in the pay to play scheme have been going to jail ever since.)

Even at the local level, endorsements often lead to acrimony. Questions have recently been raised about the propriety of Democratic state central committee members endorsing Jim Mowrer so early in the 3rd District primary race. But no recent endorsement controversy has captivated Iowa quite as much as the defection of political operative, college professor, former candidate, snazzy dresser, radio host, and blogger Sam Clovis. As you are all aware, Clovis just left his position with Rick Perry and joined Donald Trump’s why-isn’t-this-a-reality-show campaign.

There are a number of reasons Clovis’ about-face is noteworthy. For one, it is another sign that Rick Perry’s campaign is on life support. (I think Rick Perry was slighted by the way Fox News arranged the coverage and polls to ensure that their former commentator John Kasich got the last spot at the ‘real’ debate, but Perry’s campaign has been self-destructing ever since.) For another, Clovis’ high profile flip-flop reeks of the Sorenson fiasco.

There are many similarities to the Kent Sorenson case. The Perry campaign, just like the Bachmann campaign in 2011, has very publicly had problems making pay roll. Meanwhile, there is no question Donald “I have a lot of money, trust me” Trump can pay his staff. Thus, the Perry-to-Donald change makes the same type of, shall we say, economic viability sense, as the Bachmann-to-Paul change did. Those similarities are even more eerie when you take political ideology into consideration.

In 2011, Michele Bachmann campaigned, primarily, as a social conservative champion. Bachmann famously got her start in politics in part fighting to ban the movie Aladdin from her children’s school because she believed the movie promoted the occult. Those types of social conservative causes galvanized her support and provided direction for her campaign. Meanwhile, Ron Paul was the libertarian champion who campaigned on severe economic policy (audit the FED!) sprinkled with isolationism and laissez-faire social policy (legalize marijuana and online gambling!). If a person believed that Michele Bachman had the right message for the country, it would not make sense to leave her campaign in favor of Ron Paul. Paul and Bachmann literally represented entirely different portions of the Republican electorate with almost no overlap.

Logically, a person who wanted to leave Michele Bachman’s campaign because of viability issues would have joined Rick Santorum. Santorum’s beliefs overlapped almost completely with Bachmann and he went onto win 11 states. It should go without saying, but leaving Perry’s campaign, which in recent weeks has existed almost entirely to attack Donald Trump, to join Trump’s campaign makes zero ideological sense.

When you hear Sam Clovis speak, or hear someone speak about Clovis, the first biographical tidbit you learn is that Clovis was in the Air Force for 25 years, retiring as colonel. What is Donald Trump’s most famous statement on the military? Oh that’s right, he only likes “people who weren’t captured.” Donald Trump got a string of deferments to avoid military service. Meanwhile, Rick Perry was a fighter pilot just like Clovis. It is hard to believe that Clovis would have more in common with Trump than a fellow fighter pilot.

Biographies aside, Clovis’ conservative beliefs have been extensively documented, especially over at the Iowa Republican. Clovis has written about how gay rights are an assault on traditional morals and marriage. Meanwhile, Donald Trump has been thrice married and has a long history on calling for equal rights for the LGBT community. As recently as February, Clovis said that national security was the most important Republican issue. Donald’s foreign policy plan starts, and ends, with his declaration that he would be the best at it. Clovis has written about how government grants and subsidies destroy the free market economy. Meanwhile, Trump has gotten rich by exploiting the same government programs Clovis despises. 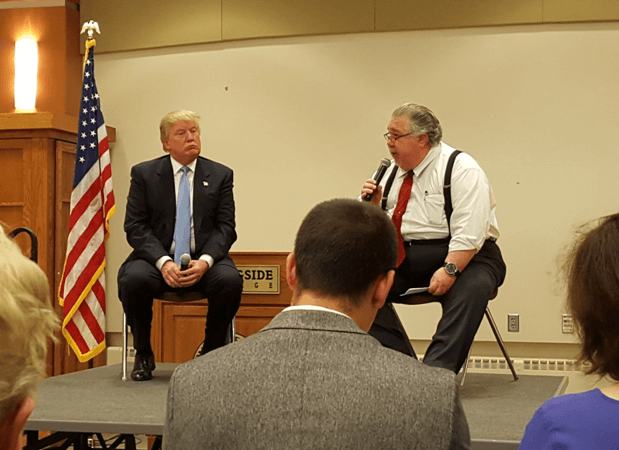 I could go on, but you get the idea. Trump’s current talking points don’t align with the positions he took in the past. 15 years ago Trump was a Democrat supporting Hillary Clinton and advocating for socialized health care. But more important to this post is that Trump’s positions, past or present, don’t align with Sam Clovis’ beliefs. And you don’t have to take my word for it. Sam Clovis, circa a month ago, agrees with me. As set out in numerous articles, Clovis wrote that, “Why should I not be suspicious of a person who advocates for universal health care? … Why should I not be suspicious of someone who says he hates lobbyists and yet has spread millions of dollars around to Republicans and Democrats to enrich himself? Why should I not be suspicious of someone who cannot come to say that he believes in God, that he has never asked for forgiveness and that communion is simply wine and a cracker?” Clovis summed Trump up as a “cancer on conservatism.” It is easy to think that that Clovis endorsing Trump stinks, when there is plenty of evidence that if you had met him at a 4th of July picnic, Clovis would have agreed.

None of this is meant to imply that Sam Clovis did anything illegal in switching sides. (Although, I firmly believe that it is far more likely that Trump’s campaign will end because of something that comes out of Trump’s wallet, rather than something that comes out of his mouth.) Regardless of whether you have an R or a D behind your name, if you believe that fighting for your convictions is an important part of politics, Clovis’ defection from the Perry campaign is troubling.

I think you can divide extreme conservatives into two groups. You have Republicans whose conservative ideals seem sincerely held. I put Rick Santorum, Mike Huckabee, and Bobby Jindal into that group. Although I disagree with them on almost everything, I assume that their political positions stem from deeply held personal beliefs. Then you have those Republicans who are just putting on show, adopting whatever extreme position will pave their way towards power. I think Ted Cruz and Donald Trump exemplify this type of conservative showmen. (Don’t forget that Donald’s real entry into politics came through the horrible, but headline grabbing, birther movement.)

Having spent my life in Northwest Iowa and having seen Sam Clovis speak innumerable times, I would have put Sam Clovis in the former group. Although I disagree with his positions, and have at times mocked the persona he adopted for political events, I never suspected that Clovis’ beliefs were disingenuous. I thought he was a movement conservative, deeply religious and inspired by his military past. Clearly, I was wrong. Regardless of whether Trump is a legitimate candidate or a true force to challenge the Washington establishment, an ideological conservative he is not. In endorsing Trump, Clovis has cheapened his own image and called into the question the sincerity of all future political endorsements. I honestly thought better of him.