After 11 days, 21 presidential candidates and a whole lot of pork chops-on-a-sticks eaten, the 2015 Iowa State Fair has (sadly) come to a close. It will likely be remembered as the most political caucus Fair for some time, with every legitimate candidate save for Rand Paul showing up. Team Starting Line was on hand for all but one candidate (missed Jeb Bush) to bring you every moment. Here’s our list of the 10 best ones:

1. Trump Buzzes Hillary in Helicopter, Tells Child “I Am Batman”

It’s doubtful many other moments during the 2016 Iowa Caucus campaign will stick in my head the way the hilarious Donald Trump helicopter fly-over of Hillary Clinton does. While following the press scrum around Clinton near the Pork Producers tent, a number of people behind me yelled out “Trump!” I looked over my shoulder to see everyone pointing to the sky. There flew the Trump helicopter, his name printed big enough on the craft’s tail for anyone on the ground to see. And then he flew back over Clinton several minutes later just for kicks. 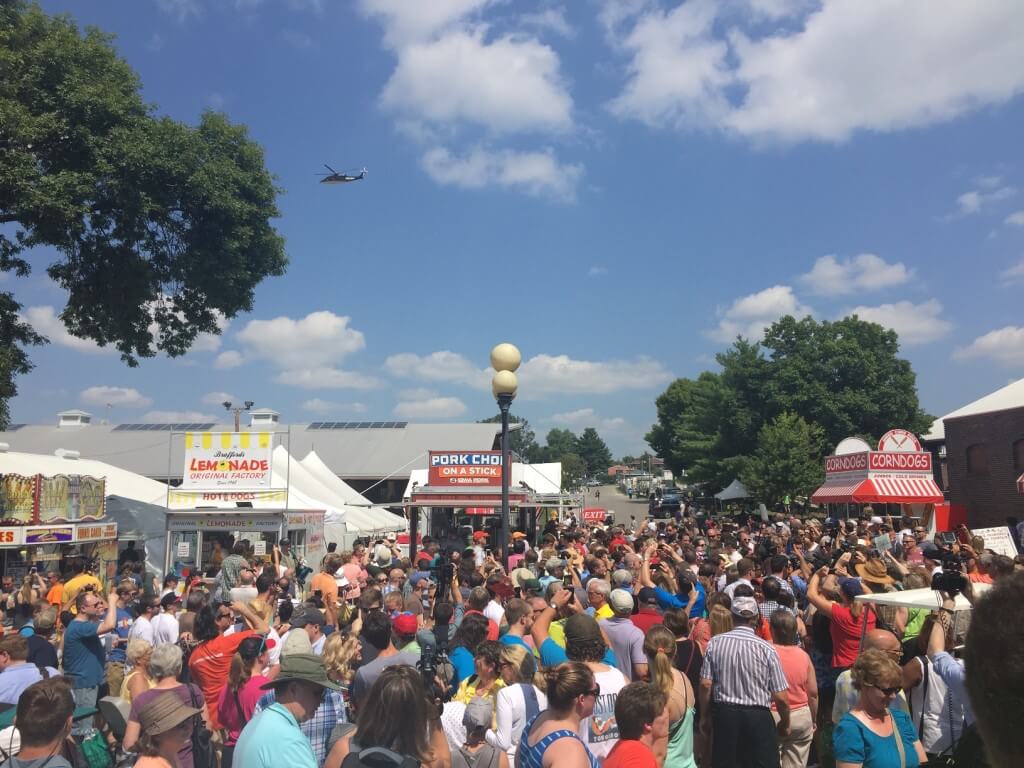 Even better was his conversation with the children who took the first ride up in the Trump-o-copter. “Are you Batman?” asked one nine-year-old eager to board the helicopter. “I am Batman” replied Trump. And many might agree that Trump really is the hero (or anti-hero) American voters more than deserve right now.

Also, how is Trump’s helicopter stunt not a perfect metaphor for his entire campaign? A few weeks earlier, the State Fair told Trump he couldn’t land the chopper at the Fairgrounds to give children rides due to obvious liability reasons. So what did Trump do? He circumvented the rules, moved his landing off-site and gave a bunch of kids the thrill ride they wanted. So basically exactly what he’s doing in the Republican Party.

Like we mentioned earlier, the massive crowd that turned out for Bernie Sanders (possibly around 2,500) may be looked back at as one of those “big moments” in the Iowa Caucus. A moment where you could see the tide turning, if you were paying attention, that is, and not distracted by the Clinton and Trump madness on the same day. 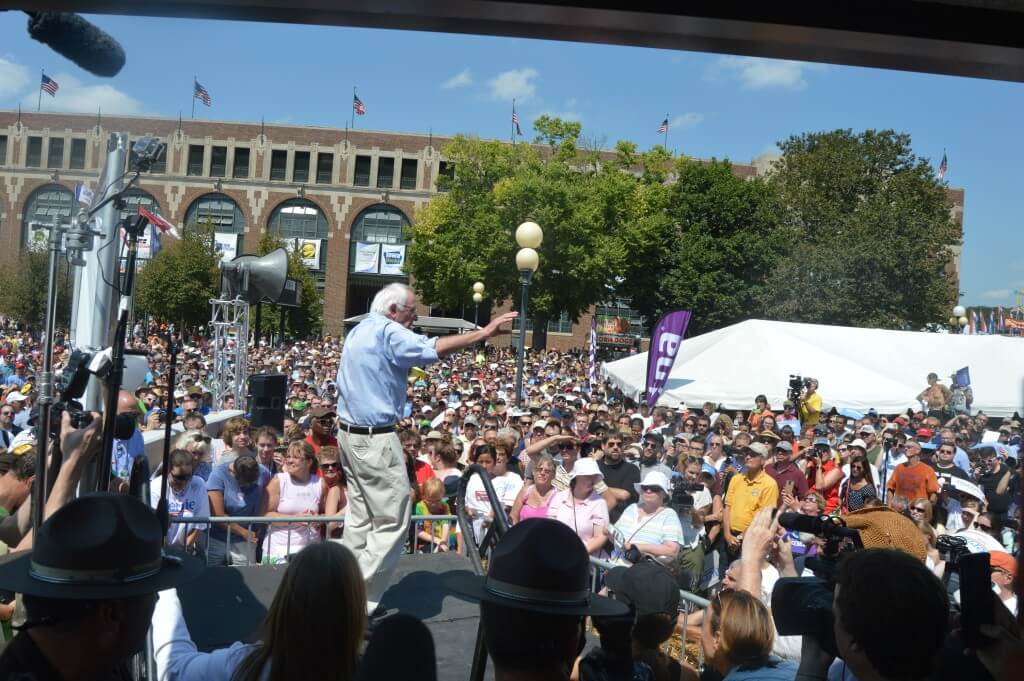 3. John Kasich Eats 3 Pork Chops in a Half Hour

Like, seriously, what the hell Kasich? I get that you like pork chops and all, but you realize Iowa Caucus-goers don’t actually vote based on who can eat the most meat, right? He also chowed down on a side of beans, corn and ice cream. Kasich gave a great speech at the Soapbox, but his insatiable appetite went a wee bit too far into weird territory.

You could feel the tension in the crowd for Walker’s Soapbox speech before he even took the stage, as a planned disruption was clearly planned. Audience members donning cheese head hats turned out to be Wisconsin voters angry over the Governor’s actions back home. Two guys at the front of the stage waved anti-Walker signs in his face for a few seconds before having them ripped apart by Walker supporters. On the plus side for the protesters, it demonstrated how incredibly polarizing a President Walker would be. On the negative side for them, it gave Walker a chance to look strong in standing up to his opponents. 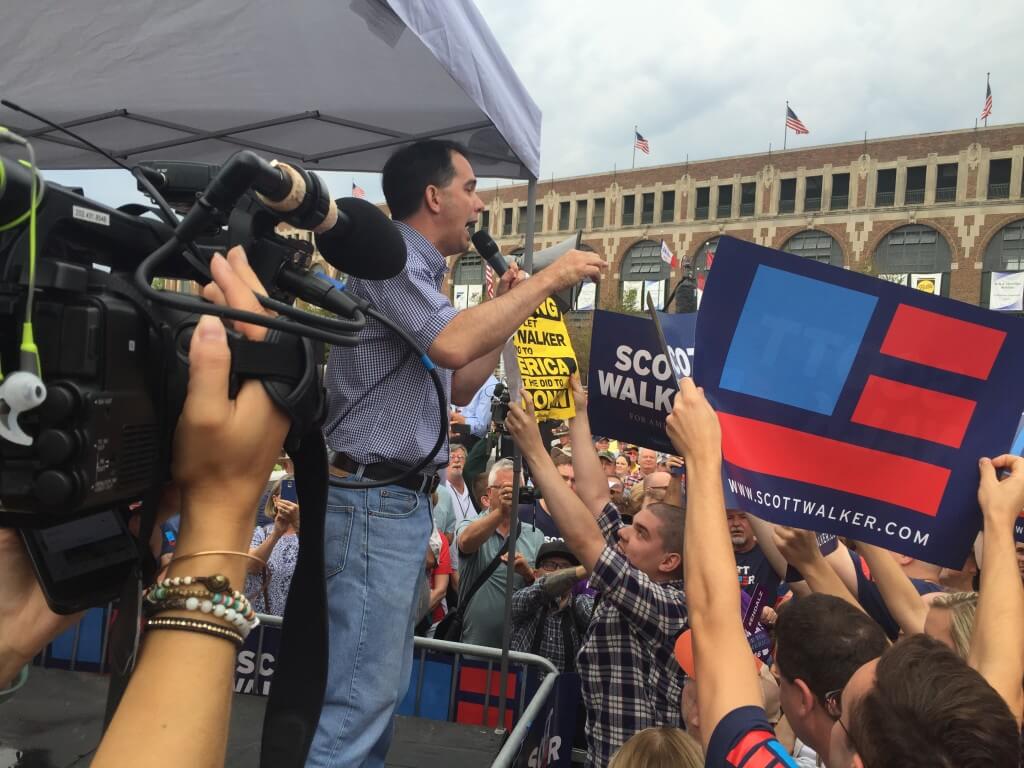 Most of the Iowa Caucus reporters thought the Walker disruption would stand as the rowdiest demonstration we’d see at the Soapbox. Nope. The ever-crazy animal rights protesters did their best to undermine their cause with an over-the-top disruption, jumping onto the stage after giving a bizarre soliloquy on dogs, pigs and torture.

In a perfect example of how you can do everything (mostly) right in a day and still have it go completely haywire, Ted Cruz’s day at the Fair turned into a media disaster. He left a joke about Jimmy Carter in his stump speech on the Soapbox, leading the press to rightly immediately ask him afterwards whether it’s appropriate to make fun of Carter a day after he revealed his cancer diagnosis. That quickly led to a flurry of negative national stories. Then Ellen Page of all people confronted him while Cruz flipped pork, challenging him on LGBT protections, dominating the rest of the day’s headlines.

Cruz’s speech at the Fair was also rather peculiar. It was not much different than his usual delivery, but it was the most intense of any speech, and undermined by his constant grin. If you’re going to deliver lines like “the persecution of religious liberty ends today!” with super-intense gusto, you shouldn’t smile like a big goofball right afterwards. The crowd still ate it up, yet if you weren’t already pre-disposed to Cruz’s issues and rhetoric, you probably had your wits scared out of you. 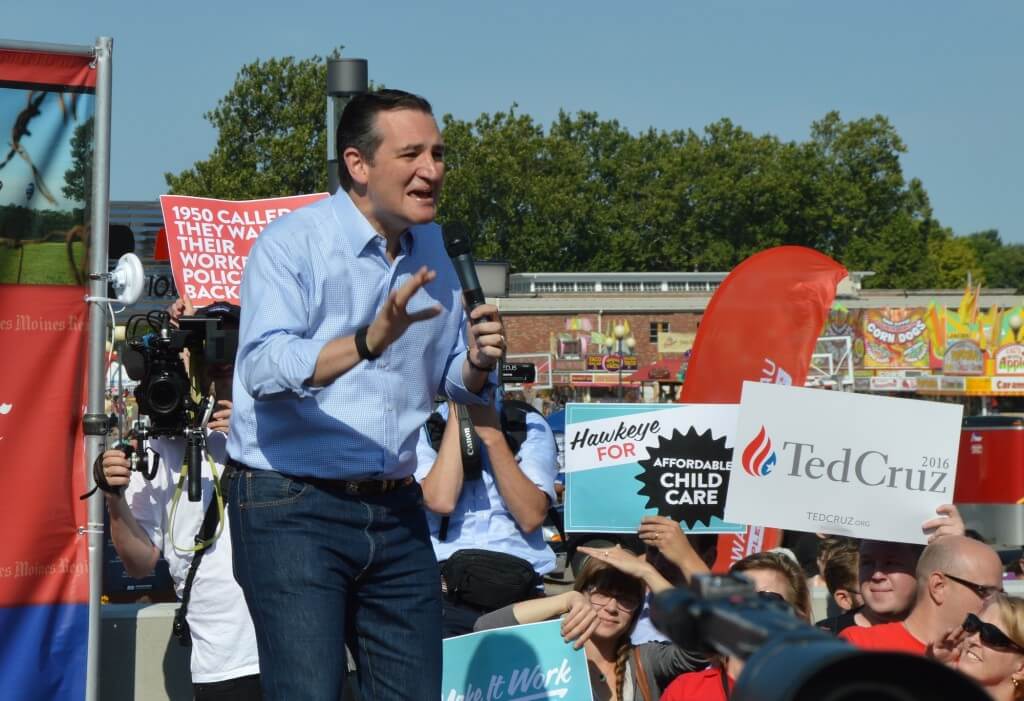 What’s so peculiar is this should have been a great setting for Cruz. He’s actually very personable in more casual settings like a fair, and did interact authentically with plenty of people on the Midway. Yet he let the intensity (and insensitivity) of his campaign style get the better of him, and came off completely wrong that day. 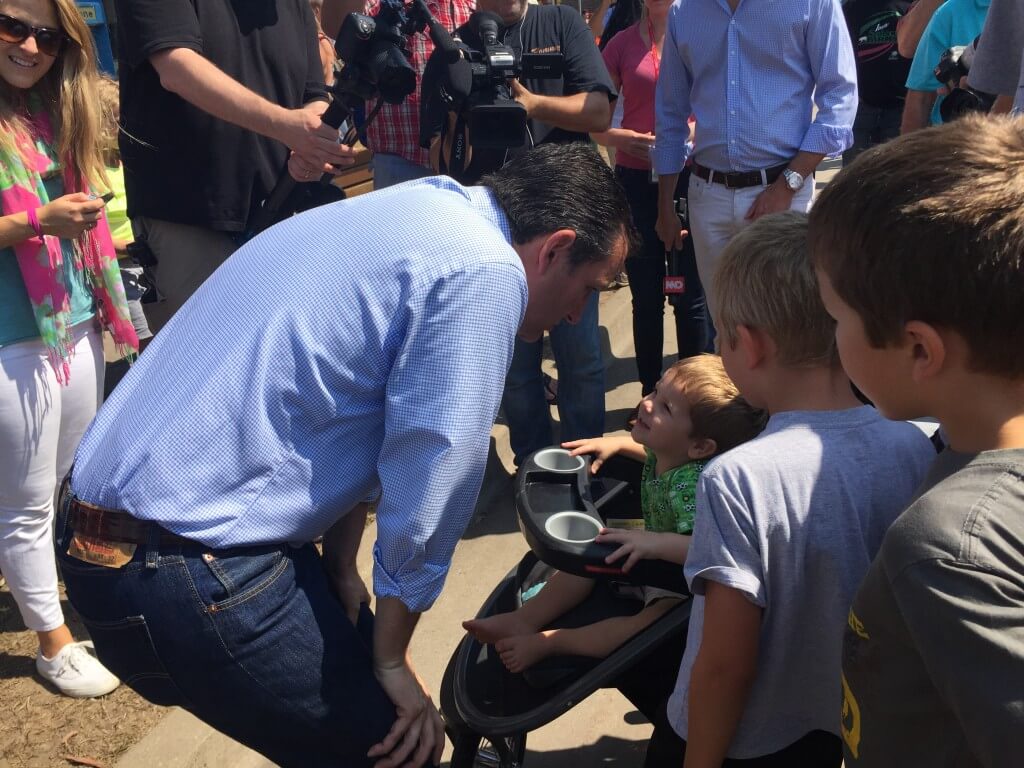 At least Cruz got to meet the Bacon Man at the Pork Producers tent.

Not necessarily a “wild” moment, just a really fun one. The O’Malley family did the Fair right, taking in the food and rides like regular fair-goers. The best part was their ride down the big yellow slide. They stayed late into the day, long after the press scrum stopped following them. One reporter happened upon them at the Craft Brew Tent in the evening with not even a staffer in sight.

Independent/fake candidate Deez Nuts has been rising in the polls since PPP Polling began adding him into their surveys for fun. It turns out it’s actually a 15-year-old Iowa teenager who filed “Deez Nuts” with the FEC, but that didn’t stop Nuts-mania from reaching the State Fair. A man dressed in a corn cob costume and wearing a shirt that read “Nominate Nuts” approached Chris Christie after his speech. “Mr. Christie, are you intimidated by Deez Nuts?” he asked the Governor. Sadly, Christie did not address the electoral viability of candidate Nuts. 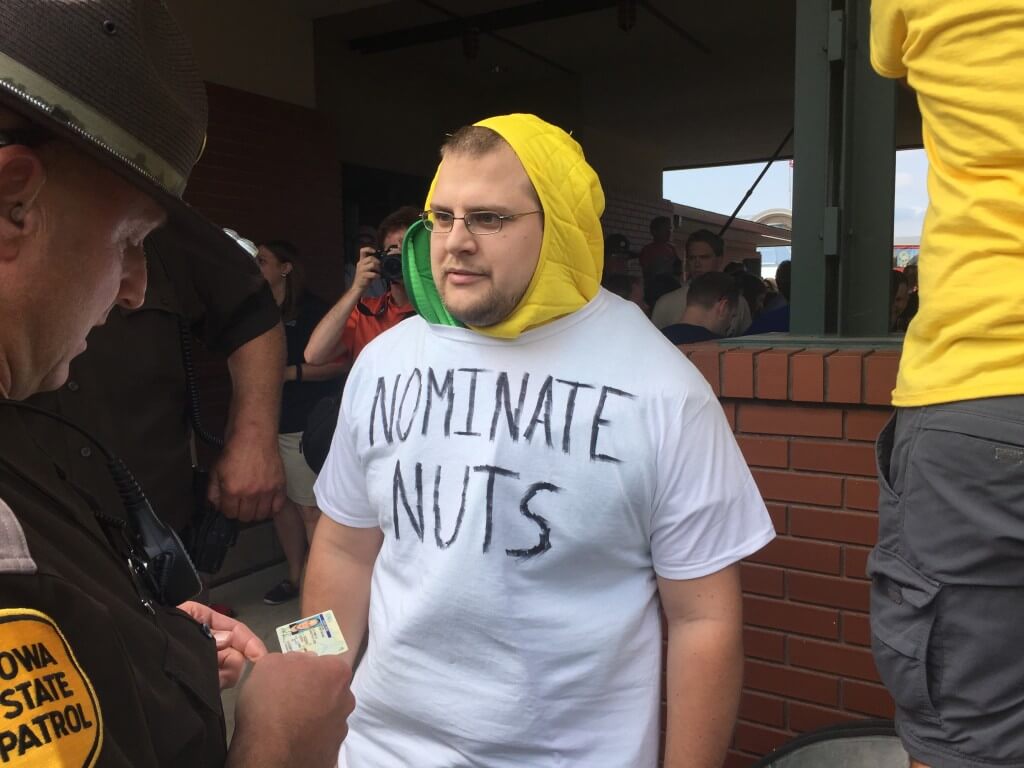 9. Kasich Gives Himself A Mustache

One of the more clever Varied Industries Building booths was the Republican Party of Iowa’s. They printed a large banner with 16 of their presidential candidates on it photoshopped in front of a corn field with midst, calling it their “Field of Dreams.” Many of the candidates stopped by to sign their names. Kasich went a step further and doodled a Branstad mustache on his photo. 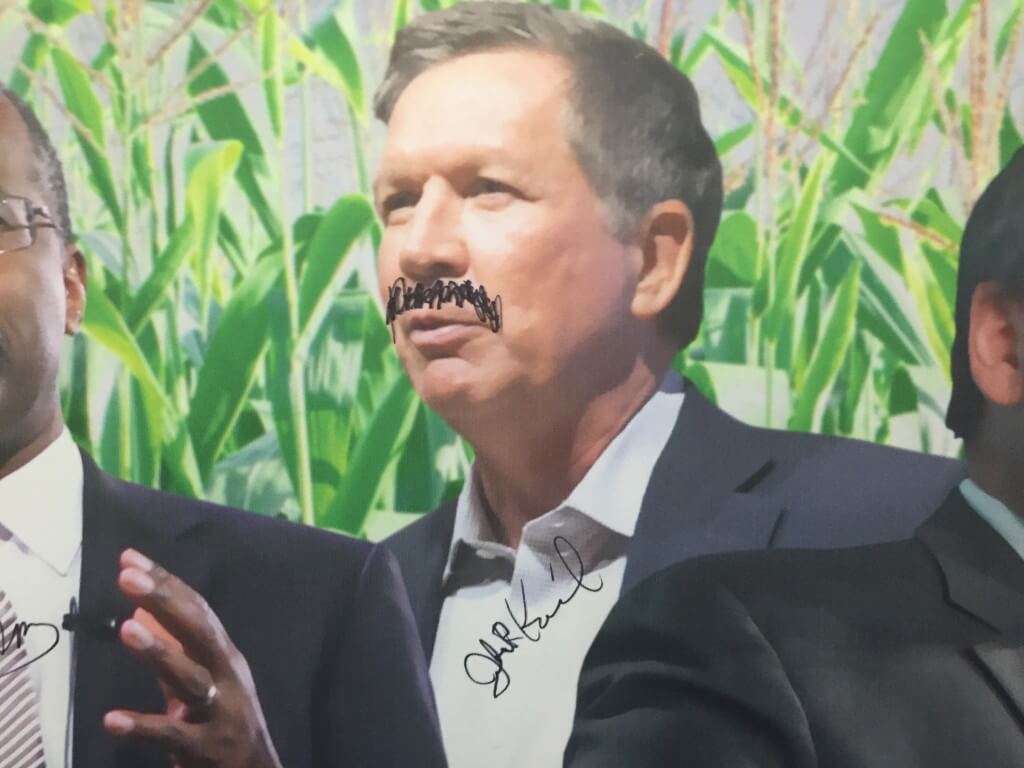 With the explosion of online news sites over the past decade, digital media production and a high interest in the 2016 presidential campaign, nearly every candidate was swarmed by a horde of press as they traveled the Fair. None was as crazy as Trump’s and Clinton’s, of course. Add in their large security details, and it can get dicey to keep up with the moving crowd. We posted video from Trump’s scrum in our earlier piece, here’s one from Hillary’s:

Farewell, Iowa State Fair. You more than lived up to your “Nothing Compares” slogan.