Speaking on a Saturday at the State Fair usually ensures a good-sized audience to listen to you as the high weekend attendance helps bring in some on-lookers. It also, however, seems to be a prime day for organized protests. The first three Soapbox speakers on Saturday – Debbie Wasserman-Schultz, Chris Christie and Bobby Jindal – all faced loud and sometimes raucous protests. As always, Starting Line was nearby (and am a little sad it was my last day at the Fair). Here’s how the craziness unfolded:

The divisiveness of the DNC’s mandated debate schedule was on full display Saturday morning, as over a dozen rowdy protesters gathered before and during the DNC chair’s speech at the Soapbox. The DNC has come under considerable fire for limiting the Democratic debates to only six, starting in mid-October, while the Republicans first of twelve already aired in the beginning of August. Martin O’Malley and Bernie Sanders have lobbied the DNC hard for additional, earlier debates, and many Democrats have rallied to the cause. As the protesters shouted “We need more debates!”, along with other slogans, Wasserman-Schultz kept her focus on promoting Democrats’ issues and criticized Republicans for recent incendiary comments. She focused in on Jeb Bush’s and others’ use of the term “anchor baby” as a very insulting and disrespectful term to immigrants. And she praised the Democratic candidates for fighting for equal pay for women, which got a loud cheer from the crowd. 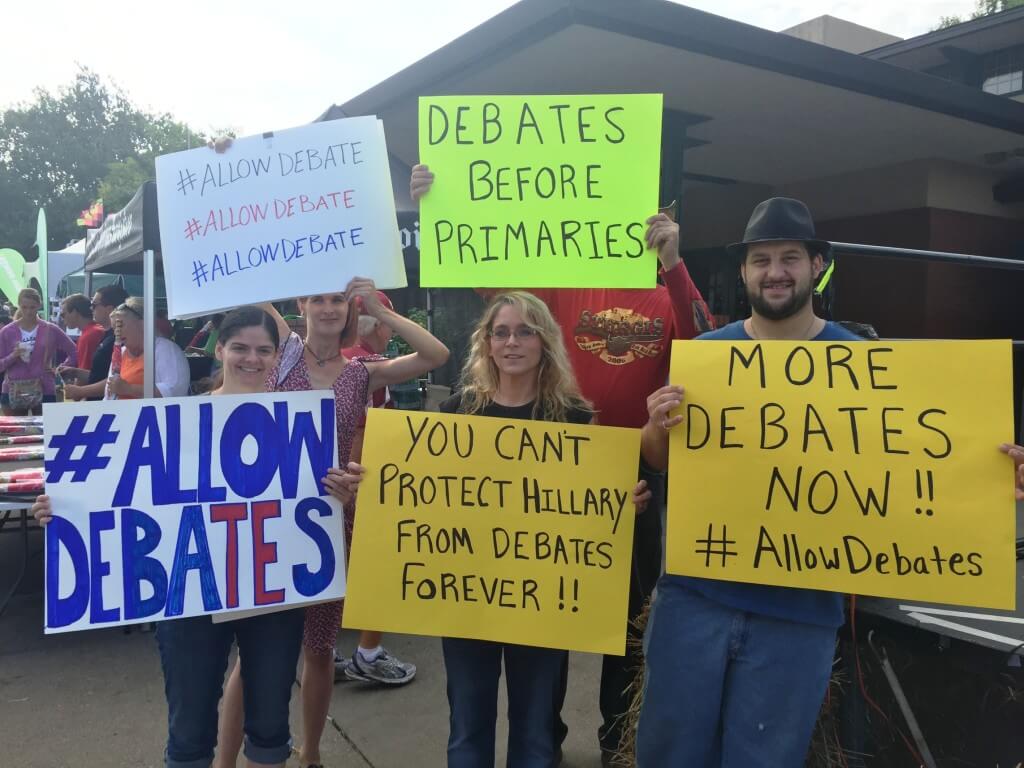 Afterwards at a press conference, the topic turned quickly back to the debates. Wasserman-Shultz argued that six sanctioned debates were about the same number of DNC sanctioned ones in 2007/2008. When pressed that the rules forbid candidates from participating in other debates, and that Democrats attended over twenty total in the 2008 elections, Wasserman-Schultz replied that it was because Democrats have a smaller field this year. None of her answers were very convincing, but she made it clear she wasn’t backing down from the debate schedule.

Overall, however, it was not a good day image-wise for Democrats. Coming away from it, you might think, “so this is what the Democratic Party has become: a bunch of lunatics yelling at each other.” A handful of Sanders and Clinton backers got into outright screaming matches often before and during the speech, with most of the pro-Clinton/pro-DNC folks from out of state (and who were so nutty I think they might have some personal issues). I recognized a couple of the most obnoxious protesters as local Sanders folks. There were some O’Malley backers there too, but I think they just held up signs. Considering the protesters wanted more debates where the candidates could calmly lay out their policy proposals, this was an odd way to do it. Shouting at the DNC chair “You should be in jail!” is simply not helpful to your cause, nor is cursing at audience members who disagree or the press. Here’s a suggestion to organizers of such protests in the future: next time, send a fucking adult who can regulate your crazier members’ actions. Protests are fine, but can easily backfire if you come off as raving, disrespectful lunatics, which these people did. Honestly, if the candidate of choice for some of the protesters I recognized ends up losing, I sincerely hope they leave the party. I don’t want assholes like that representing Democrats anywhere.

The combative New Jersey Governor seemed to be in his element on the Soapbox stage, speaking to one of the larger crowds that gathered for a Republican candidate. Like Carly Fiorina, he jumped right into Q&A, and actually gave one of the best, most substantive performances of any candidate. In responding to audience member’s questions, he avoided the typical red meat applause lines and – get this – actually directly answered the issues people asked about. He related nearly every answer to how he worked on a policy in New Jersey, what the problems and solutions they found were, and described the nuance of each. Of course, he also got heckled and protested at like crazy. After responding on immigration unsatisfactorily to an immigrants’ rights questioner (he said those who came here illegally shouldn’t receive citizenship), a large gathering of protesters started up chants. “We want freedom!” and “We pay taxes!” shouted the organized group throughout the entire rest of Christie’s Soapbox time. It made it a little difficult for Christie to hear other questions from the crowd, but it was nothing compared to what came next. An anti-animal cruelty organization, apparently unaware that they were at the Iowa State Fair, decided to see if they could get even more people to hate their cause by storming the stage, shouting a lot and unfurling a banner. The three protesters nearly trampled a little girl sitting at the front of the crowd in the midst of it all. The insanely over-the-top demonstration was quickly drug off the stage by several state troopers. Here’s the close-up video I shot of it:

Despite the protests, Christie actually had a pretty good day at the Fair. He spent almost the entire day on the Fairgrounds with much of his family in tow. His wife in particular seemed to really enjoy the festivities. As nearly all candidates did, Christie stopped by the Pork Producers tent to flip some meat: The last of the serious presidential contenders to take the Soapbox stage, Jindal’s speech seemed almost custom-designed to piss off the immigrant rights’ protesters in the crowd (though, to be fair, it was the exact same stump speech he often uses). Jindal began by bragging of how his parents came to America legally, then launched into a criticism of the country’s current immigration system. 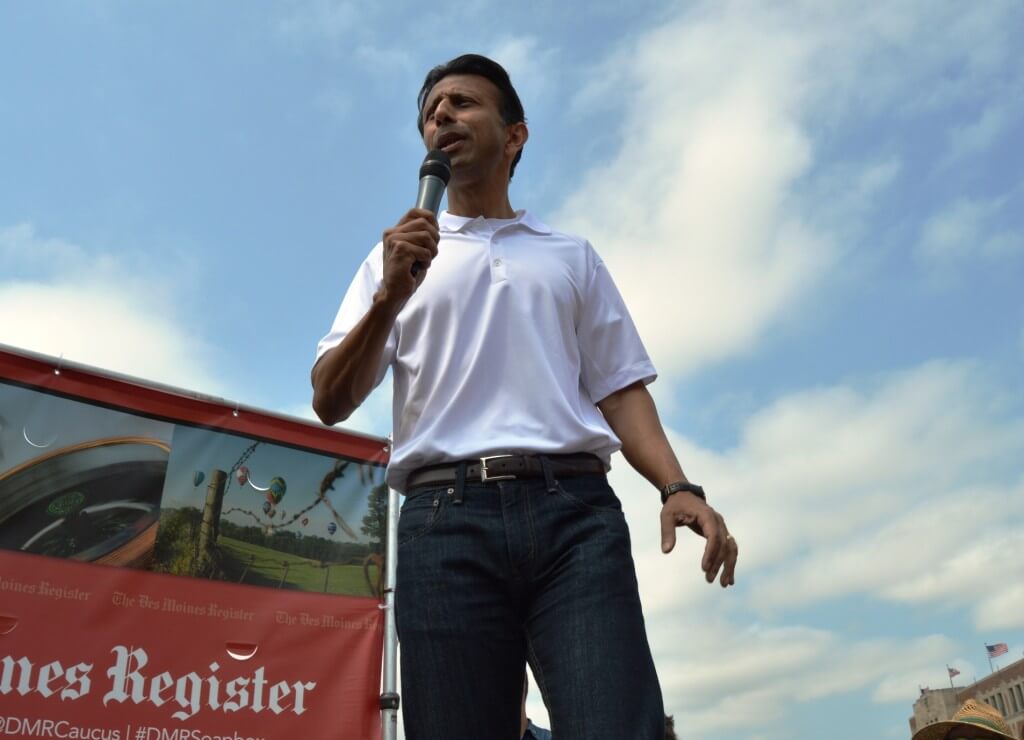 “Immigration without assimilation, that’s invasion,” Jindal said, then turned to chastise the immigrant protesters. “When you come here, roll up your sleeves and get to work … If you want to come to our country, come legally, learn English.” That got the protesters pretty riled up, who chanted loudly throughout the entirety of Jindal’s speech. They stayed within their own group on the Midway, however, and didn’t physically interrupt or say crazy, incendiary things like some of the previous protesters. It’s notable that the group of about twenty people was from Minnesota, and that those I recognized in the crowd as local immigrant activists frowned in disgust at most of Jindal’s words, but didn’t shout out during it.

However, Jindal did ask the protesters to walk along with him after his speech when they approached him to criticize his immigration comments. Things calmed down at that point, and the two sides had a serious conversation as they walked the Fair together. The discussion didn’t really change either side’s mind, but it was a nice moment that candidates should try to do more often.