The Iowa State Fair saved its most dreary weather for two Republican candidates struggling to keep up in the nomination fight. Marco Rubio faced a crowd this Tuesday at the Fair, but it was certainly not the type the presidential candidate was hoping for. Rain fell from gloomy skies in sheets, and Rubio was forced to give his soapbox speech to a sea of umbrellas.

Rubio told listeners that he would cut the speech short to avoid an oncoming burst of rain, but he still seemed rushed, not quite as enthusiastic as he’s been at previous events. He stuck to his usual talking points – America needs to compete on a global level, America needs to stop stigmatizing vocational schools, America can be great in this new century with the right leader – but lines that usually draw a big laugh seemed to fizzle. His popular Greek philosopher joke (it’s been a tough market for them these past 2000 years) only got a chuckle, although his next line did land well. “I’m not saying we’re going to get rid of four-year colleges,” Rubio said. “They’re going to remain part of our program. After all, how are we going to get college football without them?” 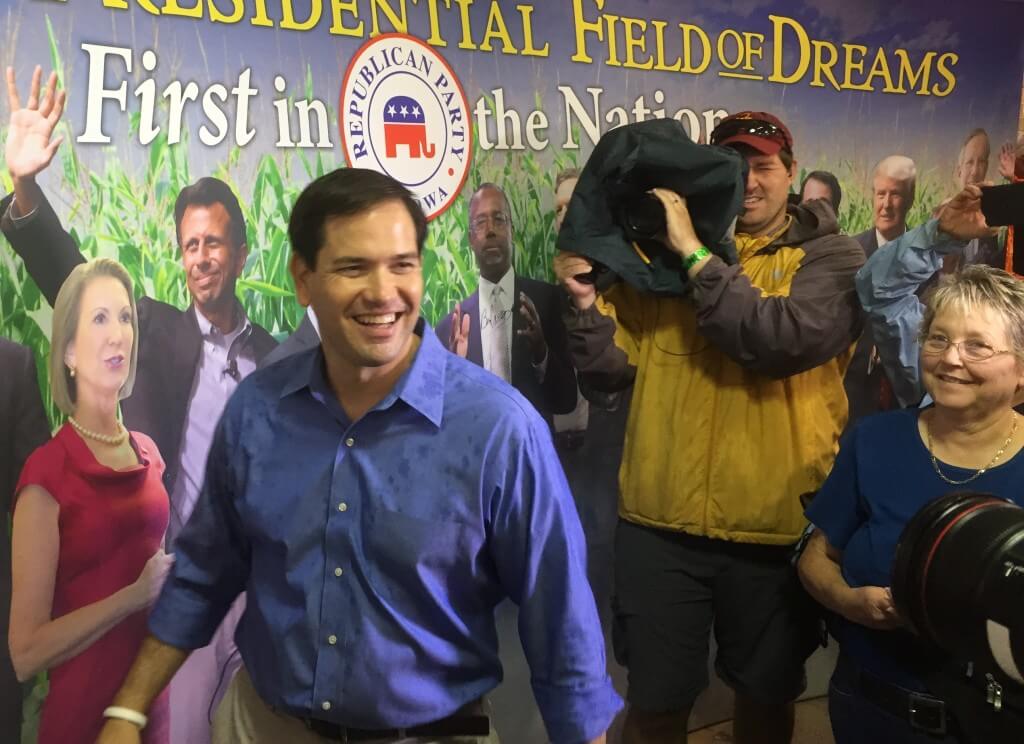 Rubio had not visited Iowa since July 18, a surprising move for a candidate many expected to be a Republican front-runner. The most recent polls show that Rubio is tied with Jeb Bush for sixth place, and Starting Line sees him falling behind in Iowa. While there are certainly worse spots to be, trailing Washington outsiders like neurosurgeon Ben Carson, businesswoman Carly Fiorina, and the notorious Donald Trump is probably not what Rubio’s campaign expected.

Surprisingly, it was another candidate who demonstrated how to draw attention despite trailing in the polls. Rick Perry, the former governor of Texas who is even farther behind in the standings than Rubio (he trails 12 of the 16 Republican candidates), used his time on the soapbox this Wednesday to generate enthusiasm for his candidacy. Perry expressed frustration with the federal government. “Washington D.C. has decided that all decisions need to be made there,” Perry said. “You know what my answer to Washington D.C. is? I’m mad as hell and I’m going to do something about it to change it.”

Perry’s crowd looked pretty impressive after the rain-soaked Rubio group, but it hardly compared to the 750 people gathered to hear Fiorina speak, or the thousand supporters who showed up for Carson. Still, it’s worth noting that Perry got his moderate-sized crowd pretty riled up with an energetic performance. Calls to beef up the military were well-received, and the crowd responded positively to other security references as well. “Our constitution tells us to do something else in this country, and that is to secure the national borders,” said Perry to applause and cheers. “Wouldn’t it be awesome if the federal government got those things right?” 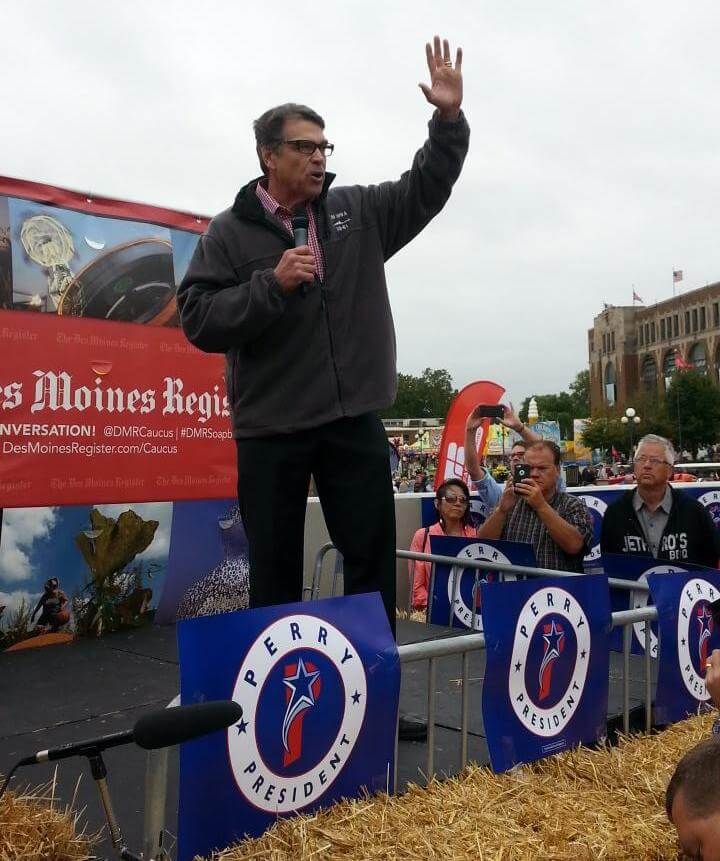 Perry also spent a significant amount of time mingling with fair-goers after his speech, and arrived to the Fair with no press fanfare the previous night to meet people without the media entourage. People noticed Perry’s amiable nature. Summer Jay, a former Texas resident who now lives in Iowa, praised Perry for being nice and “down to earth,” especially appreciating that the former governor stopped to converse with her kids.

Both Rubio and Perry have an established political presence, yet both trail inexperienced candidates in the polls. Donald Trump is currently leading the Republican field, and some believe his popularity comes from the fact that he is just so… different. “Everyone plays by a set of rules, and he’s just breaking them all down,” said Pat Holgan, a fair-goer who notes that Trump is not his top candidate. “I think the rest of the candidates ought to learn from that, personally.” 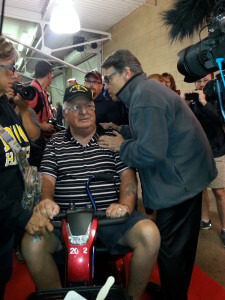 However, as many point out, it is still very early. Perry himself says that the frustration has not set in for him, even recalling a few other situations that have tried his patience: “I dated my wife for 16 years, I asked her to get married often,” Perry said. “I sold Bible books in 1969 door-to-door, so I understand frustration.”

Despite reports that his campaign is broke, Perry insists that he is not going anywhere – or, rather, he is going a lot of places. “We had the best week of fundraising last week that we’ve had since June, so I think most of you are making a little too much to-do about this story,” said Perry when asked about his struggling campaign. “I’m going to be in South Carolina at the end of the week, and then back in Iowa again.”

Ultimately, Rubio could learn a thing or two from Perry. Not about fundraising; nothing can fix a campaign without money. However, Rubio might try imitating Perry’s good-natured enthusiasm. After all, Rubio is charismatic and capable of appealing to young voters. He came across well while flipping pork-chops and burgers (per Iowa State Fair tradition). Joking around with his daughters and chatting about grilling made him seem like the type of guy you would want to get a beer with.

The rain was bad luck, and Rubio did draw a larger crowd of about 350 at the Wellman’s West bar in West Des Moines later that day (although even there it started raining the moment he got up to speak). He still has a much better shot at capturing the nomination than Perry. But fans of the young senator certainly need one wish granted: Marco… please come back soon. Oh, and try not to nail kids in the head with a football next time you’re here.