It’s the most fun eleven days of the political season: the Iowa State Fair during the Iowa Caucus! The campaign festivities got off to a great start on Thursday with three presidential candidates (and a former POTUS) making speeches, shaking hands and eating pork chops-on-a-stick. Mike Huckabee, Jim Webb and Martin O’Malley traversed the fairgrounds and gave their pitch to the crowd at the Des Moines Register’s Soapbox (you can watch all the speeches in their entirety at the Register). Here’s our fun takeaways from the day (which, as always, turned into a way longer post than it needed to): 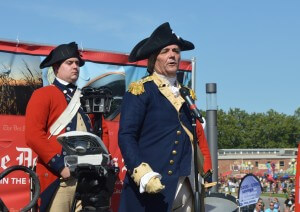 The first speaker up on the Des Moines Register’s Soap Box happened to be America’s first President, George Washington. While candidate Washington enjoys the highest name ID of any White House contestant, he too is polling behind Donald Trump. Ok, so it was actually an actor from colonial Williamsburg – and a pretty good one, too. Washington encouraged participation in the Iowa Caucus and voting process, and gave a warning about the rise of “factionalism” in American politics. Though for a guy who led off telling the crowd in-character that he’s never seen a microphone device before and used the word “betwixt” a lot, the former first President sure is good at Twitter, sending out amusing pictures from his time at the fair. Seriously, check out his Twitter feed, especially his baller walk-off after throwing a good pitch at an Iowa Cubs game: 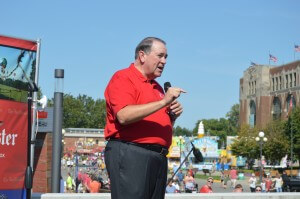 Ok, onto the actual candidates. Huckabee was the first Soapbox speaker of 2015, leading off his speech with “I have a suggestion for you: pork chop-on-a-stick.” He then offered to the mostly Republican audience that he would be well-prepared to take on Hillary Clinton in the general election, because he’s defeated the “Clinton machine” in Arkansas before. He recalled his blue-collar upbringing and got cheers for calling for a Fair Tax and for abolishing the IRS. Huckabee also said it was possible to completely secure the Mexican border within just a year.

Huckabee had a solid crowd for his speech. An audience of about 200-300 (though I’m bad at estimates) surrounded the stage, and many passer-bys stopped to listen in. It helps that Washington opened for Huckabee and that he was the first speaker (and that it was in the morning before it got too hot). 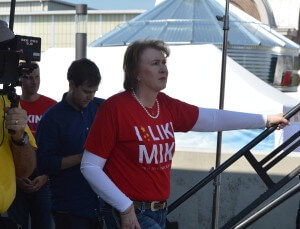 Most of the questions he fielded were from obvious staffers or volunteers from issue-based groups, and only a handful from regular voters (as was the case with every candidate). He was asked about AIDs and malaria funding overseas, public arts education funding and the Renewable Fuels Standard, among other topics.

Afterwards, Huckabee spent another half hour wandering the fair, touring the Varied Industries building and a tent promoting infrastructure investments. Janet Huckabee, the candidate’s wife, is quickly becoming one of my favorite caucus personalities. They bantered often on their walk, with Mike complaining she wouldn’t let him eat the fun fried food, and Janet shooting back that “well, you won’t let me ride the fun rides.” I was a little surprised Huckabee left the fair so soon after his speech. Seemed like the natural setting for his folksy, personable charm. 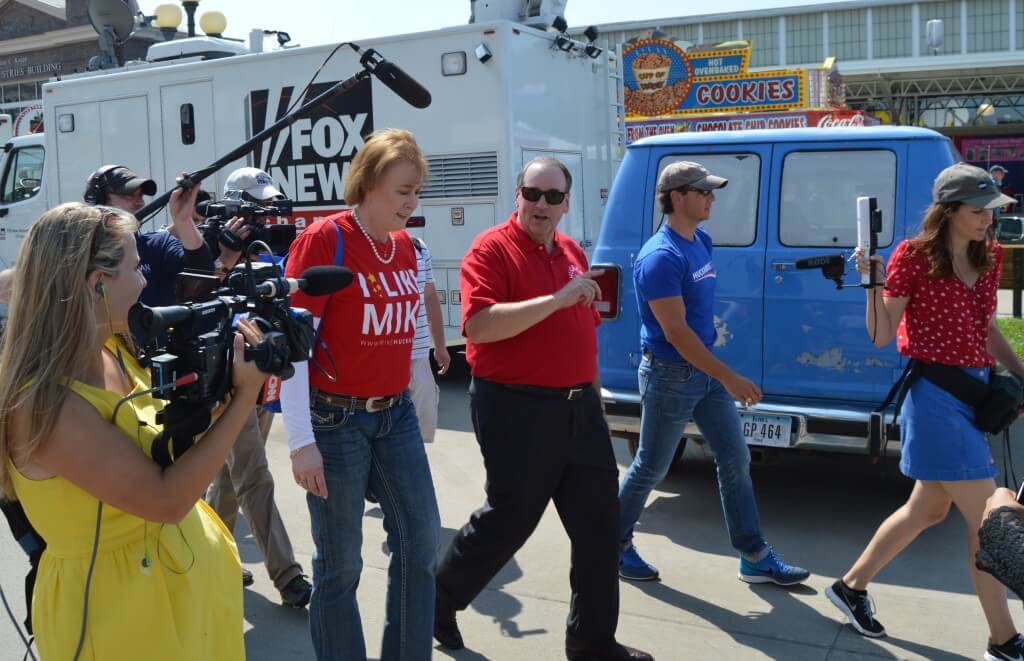 Sporting a U.S. Marine Corp hat, jeans and a checkered shirt, Webb blended into the fair-going crowd quite well. Before his speech Webb may have had the most authentic State Fair experience – he spent about an hour and a half before his speech walking around with a veteran buddy of him (though oddly, the press wasn’t given a heads-up, so people didn’t get good pictures). 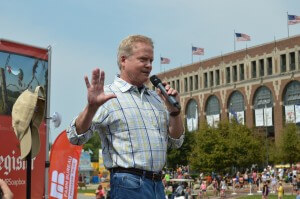 As we mentioned earlier this week, Webb is starting to find his groove on the campaign trail, and he continued his improvement at the Soapbox. He offered his military background as useful commander-in-chief experience and noted how the country was “going through an emotional process” on several issues, and hope people gave him a look “when it all calms down.” Most importantly, it was a more focused speech than he’s had before.

Webb side-stepped most of the issue groups’ questions and requests to pin him down on a specific position. “I don’t sign pledges,” he replied to a query on early childhood nutrition, simply saying he’ll give his leadership on the issue. Nor did he pledge specifics on Americorp funding or commit to the RFS, though he noted he’s supportive of renewable energy and has visited ethanol plants and wind turbine fields. He did note, however, that he supports the Keystone Pipeline, saying that he believes it has a neutral environmental impact, arguing the trucks carrying the oil now cause damage as well. 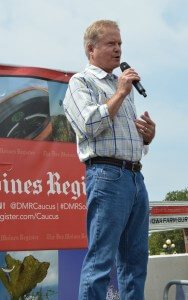 On one of the few non-issue group questions that asked Webb who his two favorite presidents of the 20th Century were, Webb named Franklin Roosevelt and Ronald Reagan. He credited the Roosevelt pick for his many social programs that helped the poor, bringing up how his mother grew up in “utter poverty” in Arkansas. For Reagan, Webb mentioned how he served in his administration and liked the strong leadership Reagan brought to issues, even if Webb disagreed with the policies. A few people nodded their heads, though I overheard one older lady say later “he lost me at Reagan.”

Webb’s best moment came as he brought out his anti-Super PAC lines, which he has more often at recent events. “If you think that’s wrong, why are you taking the money?” he encouraged voters to ask the other candidates with Super PACs.

Webb seemed to enjoy most of his time at the State Fair – except, noticeably, on his way out as a large press scrum surrounded him. He kept walking at a brisk pace as reporter after reporter jumped in to ask him questions. “It’s like one of the Beatles,” reacted a man to the heavy press entourage trailing Webb. 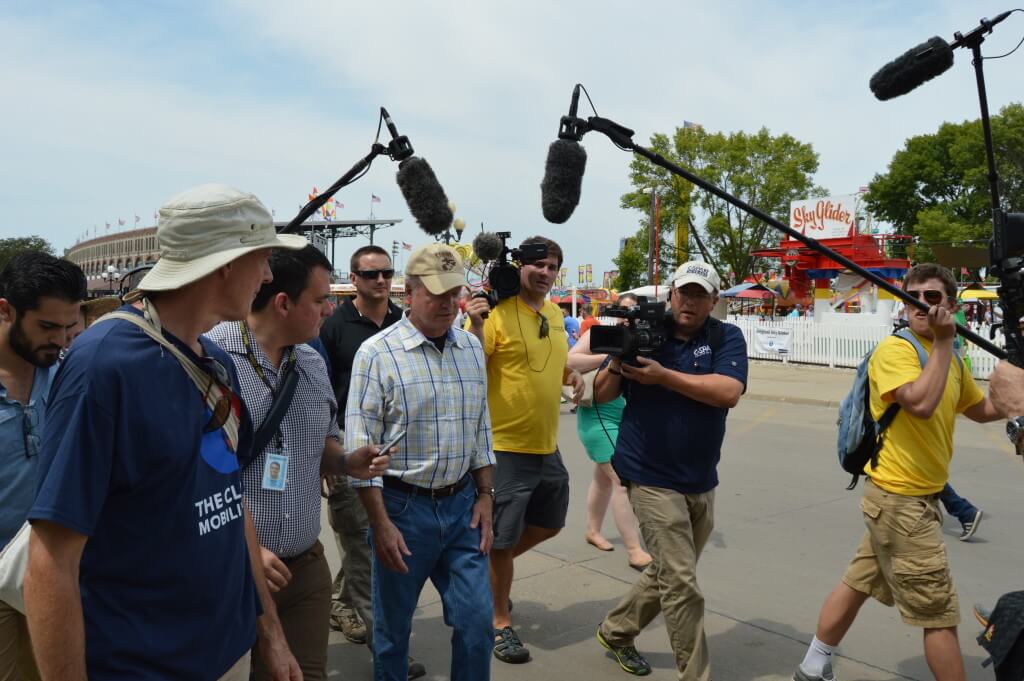 One reporter asked him about the Jefferson-Jackson name change from the Iowa Democratic Party, to which Webb didn’t have an opinion. “How about the Roosevelt-Reagan Dinner,” joked Ed Fallon, who came up to talk to Webb about his climate change march.

O’Malley did the State Fair right, bringing his family, staying a long time, and actually riding on some of the rides. The O’Malley family walking the Fairgrounds was certainly the highlight of the day, especially their ride down the giant yellow slide:

O’Malley and his children, Grace and Will, traveled a good section of the Fair, from the Varied Industries building (O’Malley checked out a virtual reality set at the ISU booth) to the slide, to the Butter Cow, where he got a family selfie with the sculpture in the background. Along the way they stopped and chatted with dozens of fair-goers and took questions from the many reporters that followed his every move. As any candidate must, of course, O’Malley also picked up a pork chop-on-a-stick for him and his son at the Pork Producers stand (O’Malley finished his pork chop in a very quick four minutes time).

I heard quite a few “who’s that?” as O’Malley and crew passed by, although they did run into one couple visiting from Maryland who were surprised to see such a familiar face on their trip. 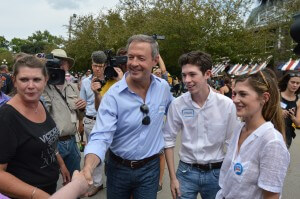 A large crowd gathered for his speech at the Soapbox, similar to Huckabee’s size, though notable that it was during the hotter afternoon. O’Malley’s campaign has often demonstrated that it’s one of the best organized in the state, and Thursday was no different, clearly having brought out a sizable crowd during a tough part of the day. Many of the audience members were waving O’Malley signs and several chants started before and during his speech. The pro-O’Malley PAC Generation Forward had their staff and supporters in t-shirts with signs to fill out the crowd as well. 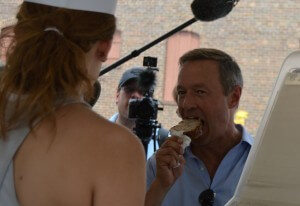 O’Malley’s speech was very energetic, his voice booming across the State Fair’s Midway over the loudspeakers. He elicited the loudest cheers of the day, and not just because he had a number of volunteers in the audience. Quite a few fair-goers stopped to listen to his speech. He earned loud reactions to opposing TPP, raising the minimum wage to $15/hour, implementing paid family and medical leave and supporting clean energy jobs.

As with the others, O’Malley took several questions from issue-based groups (it may actually be easier for candidates to call on people in specific shirts because they know what is coming). He talked about Maryland’s education funding, and contrasted it with Terry Branstad’s desire to limit funds for schools in Iowa. One older gentleman suggested that Clinton and Sanders – while good leaders to him – were simply “too damn old.” O’Malley pointed out to the man that “you’re standing in the AARP section, sir,” with many red-shirted retiree advocates around the questioner, before presenting himself as a new generation of leaders. 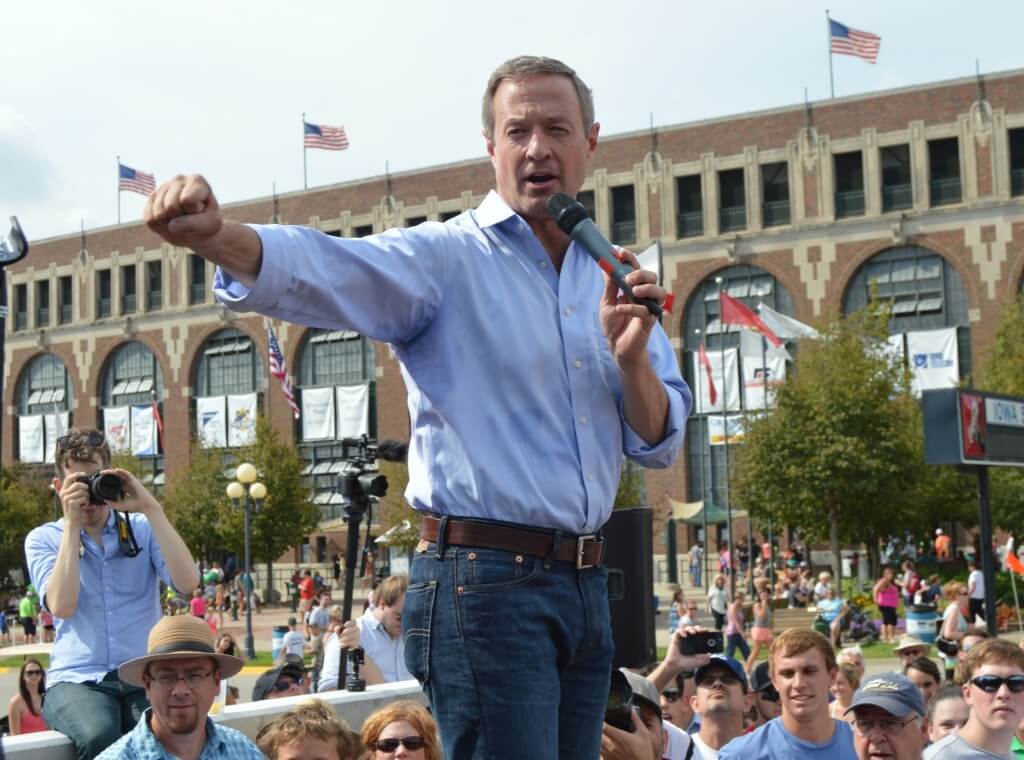 After his speech, it appears O’Malley also stopped by the Craft Beer Tent for a bit. I was pretty sweaty and tired by this point, however, and had already left. All in all, O’Malley’s trip to the State Fair and reaction from the audience was the best of the day, and also served as a nice family outing for the former Maryland Governor on the campaign trail.

Also, O’Malley talked to a robot. I feel like there is no need for further context for this picture: 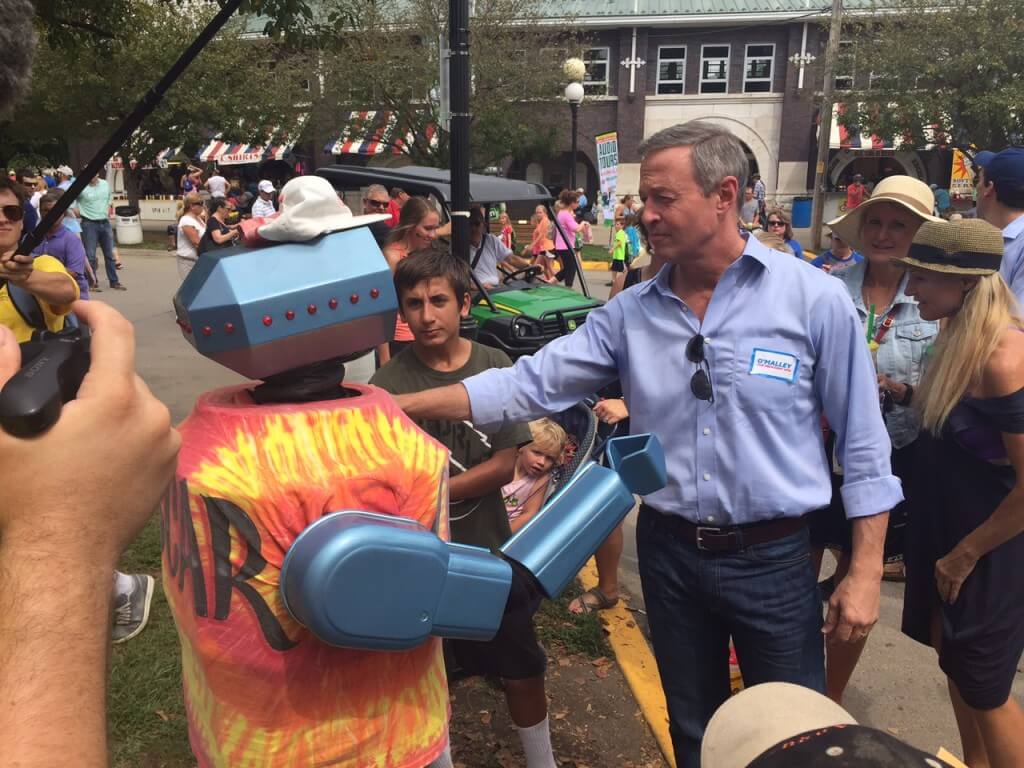