I think it goes without saying that Iowans have a tremendous opportunity to meet presidential candidates. But, as Patrick pointed out in a post, many Iowans who participate in the caucus don’t get out to see the contenders. That is a real shame. Let’s hope this website has convinced you that it would be fun to shake Lincoln Chafee’s hand or ask Carly Fiorina what running HP was like. If so, great! But, I’ve got some suggestions that might make your salon appointment with Donald Trump go a little smoother.

Caucus town halls normally follow a pretty well established pattern. As I talked about in a recent post, the average event goes something like this: audience arrives, gets a sticker, signs a sign-in sheet, and waits. The candidate arrives, is introduced, and then gives a 20 minute stump speech. After the stump, the candidate takes 5-6 questions from the audience. The candidate then stands around for a few minutes taking pictures with audience members, answering questions, and signing memorabilia. (I’ll always cherish my building-sized “Sportsman for Tancredo” banner, but how I wish I had it signed.) 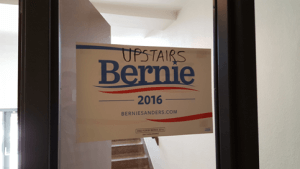 The first thing you should do to maximize your experience is arrive early. Sitting down beats the heck out of standing for an hour. Especially since events are often crowded and candidates have a tendency of arriving late. Also, sitting in the front increases your chance of getting a picture with the candidate. (If a photo with George Pataki is your Christmas card plan.)

Second, get out of your comfort zone. Even if you are pretty sure you are caucusing for Bernie Sanders, don’t be afraid to stop and say hello to Bobby Jindal. (Jindal and his wife are both tremendously effective on the stump. If you want to see rural campaigning done right, go see Jindal and his team. You may not change parties, but you will come away understanding what a majority of Louisianans saw in him.) If you want to support Jim Gilmore, it doesn’t hurt to meet Jim Webb. (You can ask why all politicians in Virginia seem to be named Jim.) George W. Bush and Bill Clinton just did an event together in Texas. Certainly Jeb won’t begrudge you popping in to meet Hillary.

Finally, ask a question. This is your chance to talk the future president. (Your guess is as good as mine as to who the next president will be. But whoever it is, that person is in Iowa now or will be again shortly.) Here are few question asking tips: 1) Raise your hand early and have your question ready. These things go quick, and it is easy to miss your chance. 2) Take a few minutes to read up on the candidate before you arrive. If you are going to see Jeb Bush, it is really a waste to ask him if he is related to those other Bushes. 3) Take a few minutes to get an idea of what the candidates’ positions are before you ask a question. Since Mike Huckabee titled his latest book God, Guns, Grits and Gravy, you probably don’t need to ask him what he puts on mashed potatoes. (However, how Huckabee reconciles his calorie laden title with his former dieting books may be an interesting question to ask.) 4) Pay attention. Bernie Sanders may be annoyed if you stand up and ask him if he is going to lower the corporate tax rate. 5) Be careful trying to ask ‘gotch-ya’ questions. (By “be careful” I mean don’t do it.) Ted Cruz has prepared answers about why he is against gay marriage. If you are liberal and try to ask him why Neil and David’s love should be denied, he will shoot you down fast, and will likely create an applause line for himself in the process. If you are conservative, asking Hillary Clinton why she attacked Benghazi is just going to get you booed. (And there is exactly zero chance you are going to trick her into admitting that Benghazi was an inside job.) Instead, if you are going to ask a candidate a question about a position they are opposed to, ground the question in your personal narrative. That way the candidate will have to respond to you, as opposed to the talking point. (For example, “Mr. Trump, I was a POW. Why don’t you like me?”) 6) Regardless of what you ask, be concise. The audience is there to listen to the candidate, not you. Feel free to ask hard questions, but get to the point.

Now, those suggestions will work great when you go to normal events. But sometimes the candidates throws you a curve ball: Maybe their event is going to be held outside. (Arrive late. In Iowa there are only two options, it will be too hot or too cold. You won’t get anything out of the event if the weather has already made you miserable.); Maybe you want to go to a cattle call like the Iowa Ag Summit. (Be careful, because event organizers may turn you away if they don’t like you. At the Iowa Ag Summit, I was turned away because corporate sponsors like Bruce Rastetter seemingly wanted to ensure a likeminded audience. If you make it into a cattle call, especially on the GOP side, make sure you have prepared for a full day of speech watching. Have your Android charged and your bladder empty.); Maybe you are the only person who showed up. (Talk to the candidate. They are glad you are there. Ask them some questions. This is your chance to get to know a national political figure. Even if no one wants to see presidential candidate Lindsey Graham eat ice cream on a workday, you can talk to famous foreign policy expert Senator Lindsey Graham. Make the most of it.); Maybe the event required a ticket and you don’t have one. (If it is a multi-candidate cattle call you might be out of luck without a ticket. But if it’s a single candidate event, damn the torpedoes and full speed ahead. Dare them to turn you away at the door.); Maybe you want to see Hillary Clinton. (Good luck, as long as her campaign keeps having invite-only house parties.) Whatever happens, be polite, but remember that the candidates are there looking for your support, so the onus is on them to make a connection. 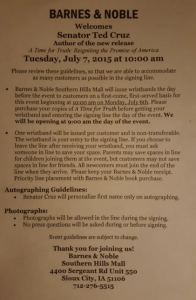 And then sometimes the candidate does an event that should get a staffer fired. Ted Cruz recently attended a book signing at the Barnes and Nobles in Sioux City. This book signing required would be attendees to get a wrist-band the day before by going to Barnes and Nobles and buying Cruz’s new book. The wrist-band would then act as an admission ticket the day Cruz arrived. They also handed out instructions to customers. (See attached photo.) The instructions stated that Senator Cruz would only “personalize first name[s]” when signing his book and also prohibited adults from saving line spaces except for children. (Because you know the K-12 set is fanatical about Cruz’s plan to send IRS agents to the border.) Now, if J.K. Rowling published Harry Potter versus the Enchanted Toupee tomorrow, I could appreciate a lot of rules at the subsequent book signings. But Ted Cruz is not J.K. Rowling and his staff should have planned for a rather casual crowd at a mid-day, mid-week, book signing. Regardless of how much ‘awe-shucks’ Texas charm Cruz projects on the stump, the fact that his staff thinks he is too important to sign “To Bob Smith” probably turned off many attendees.

So what do you do if you find yourself at a ‘bad’ event? Make the best of it! This is your chance to really test the candidate. In the Sioux City book signing situation, I’d recommend asking Cruz to sign the book to “To Professor of Aerospace Engineering Alan Bourdillion Traherne, Jr.” Making such a request would be a great opportunity to see if Cruz could roll with the punches, or if he is as inflexible as his ‘no budging in line’ instruction card would suggest.

That’s all I’ve got. Good luck and have fun. Remember that as Iowans we have the privilege to experience politics in a way few other citizens do. That privilege is also a responsibility. We need to vet these candidates so when the snow flies and we cast our votes, the rest of the country can be sure the candidates have been forced to persuade real people.

Bonus Points: The Top Ten Candidates to See (so Far)

1. Hillary Clinton (She may very well be President.)

2. Jeb Bush (He may very well be President. And his events are open to the public.)

4. Bernie Sanders (With Ron Paul not running, Bernie is your opportunity to see a politician with fanatically devoted fans. His energetic sermons on progressive economic policies are definitely worth it.)

5. Scott Walker (If you are conservative and haven’t seen him, you need to. If you are a liberal and want to have a nightmare about losing in 2016, check him out.)

6. Bobby Jindal (His personality will blow you away.)

7. Mark Everson (Apparently there are two very strict criteria to run for President. You either need to be a Governor or a Senator. Those two job titles account for roughly twenty of the declared candidates. (I always said the real problem with Thomas Jefferson, Abraham Lincoln and Dwight Eisenhower were insufficiently developed resumes.) Let’s assume for a minute that there might be a benefit in electing someone who has been neither a Governor nor a Senator. If we look at the non-Governor/Senator group, we have Donald Trump, Ben Carson, and Carly Fiorina. All three of them are considered ‘legitimate’ GOP contenders, and the first two will almost certainly make the first GOP debate. Even though Mark Everson is not considered a top tier candidate, his resume is far more impressive than Trump, Carson or Fiorina. He worked in the Reagan Administration, the Bush Administration, and for Mitch Daniels in Indiana. He also has business experience. So give him a chance.)

8. Rick Santorum (He’s got to be getting lonely. Someone needs to stop in and say hi.)

10. Ben Carson (He apparently has a weird aversion to taking photos with voters. I firmly believe that if you can’t handle being photographed, you are probably going to have a problem running for President. So go and ask for a photo. See what happens.)