While the Iowa Legislature continues to struggle to find consensus on school funding, some state representatives seem fixated on other issues. Starting Line obtained from a number of sources an email that Republican Representative Greg Heartsill sent to what appears nearly every public school superintendent in the state. Attached is a letter requesting information about the district’s participation in the Governor’s LGBTQ Youth Conference.

In his letter (which you can read here), Heartsill asks the school districts for details on their participation in the conference, including info about how many faculty and students attended, and whether the school paid any funds to send them there.

Heartsill took the lead in House debate last week to advocate for an amendment that tried to add restrictions for students wishing to attend the Governor’s annual conference. Starting Line reported on some of Heartsill’s odd statements about LGBTQ issues, which later was picked up by several national media outlets.

At least one superintendent declined the request for information, writing to his local Statehouse electeds, “We respect their privacy and rights.”

Hearstill claims the most recent conference had a number of inappropriate and “obscene” presentations that bothered attendees. Event organizers say the issues he’s referring to are either very overblown or weren’t even problems. One supposed inappropriate discussion was during a sexual health session with a doctor who answered any question students had – much like what occurs in any sex ed class in a school. 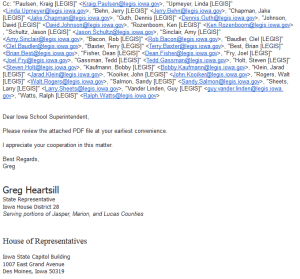 he continued criticism and focus on the Governor’s conference by Republican legislators is interesting to see. Terry Branstad, the Republican governor, has made clear his support for the program and for legislation like the anti-bullying bill, yet continues to be strongly opposed by members of his own party.

“The Governor’s Convention on LGBTQ youth is an event which has been supported by governors of both parties, and like any other event off school grounds, parents are already required to give permission for their children to attend,” says Representative Liz Bennett of Cedar Rapids. “It’s disturbing to see in action an agenda which seeks to prevent LGBTQ kids from receiving information and building supportive relationships that can help them grow to adulthood safely, but also limits these kids’ ability to look to the future and think about milestones their friends look forward to, like marriage and family. I’ve been inspired to see so many Democrats take a stand for LGBTQ equality, and it should be noted that anti-gay legislation this year has typically received only a handful of sponsors, even among Republicans. That’s progress.”