The “Scooby” van and its important occupant returned to Iowa once again this week as Hillary Clinton made a two-day swing through the caucus state. She met local activists at house parties in Mason City, Waterloo and Dubuque on Monday and Tuesday. Her one public event (well, to press anyway) in Cedar Falls featured a small business roundtable followed by a short Q&A session with a hungry press corp. She made a surprising amount of news both from the press questions and discussion with the panel members.

Starting Line attended the Cedar Falls event Tuesday morning. Rather than a full write-up (which you can read at all kinds of other places), here’s some quick takes on what stood out. I also took several short videos so you can get a better sense of what it looked like in-person. 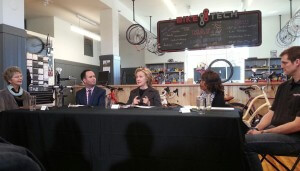 Clinton met a group of small business owners for another roundtable discussion at Bike Tech, a Cedar Falls business helped out by public/private partnership with the Cedar Falls Development Group. The event had a few subtle differences from Clinton’s first swing through Iowa in April. There was still a swarm of press inside the event (about 50 – 60 overall), but there wasn’t a circus-like atmosphere outside the building. No Japanese news teams reporting from an Iowa corn field or throngs of reporters chasing Clinton’s “Scooby” van as it drove by. 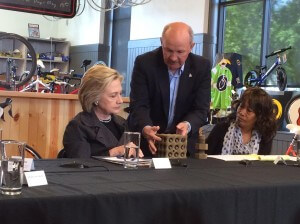 The audience also included three local elected officials, something missing from public events on her last trip. State Representative Timi Brown-Powers and State Senators Jeff Danielson and Bill Dotzler all got up to speak about local issues. Dotzler went up to the table to show Clinton a 3-D printed model from a program at the University of Northern Iowa, and spoke about ways public/private partnerships can take advantage of new technologies and create jobs. Clinton also took more questions from the audience of other locals seated by the table.

The campaign must see see small business support messaging as key to Iowa, as this is the second roundtable they’ve held on the issue here. “I want to be a small business President,” Clinton declared in her opening remarks at the event. “Ask any small business owner, as I have, and they’ll tell you: It is wrong that it is so easy for big corporations to get a break but so hard for small businesses even to get a loan.”

A little over a dozen local activists rallied outside Clinton’s events with anti-TPP signs. Clinton was asked by the event’s moderator how she felt on TPP (which was interesting – either the questions aren’t pre-screened or they are and the campaign hoped to make a comment on the issue in a more controlled setting). She addressed what she acknowledged was a “hot topic,” but her answer may not fully satisfy people on either side of the issue.

“I want to judge the final agreement,” she said. “I have been for trade agreements, I have been against trade agreements.” She listed a number of reasons to oppose a trade deal that lines up with many progressives’ beliefs, but hedged on a specific stance for TPP. See the full nuances of her response:

The questions from the press were predictable – more interesting was what came out of the roundtable discussion. Perhaps the most unexpected bit of news came when Clinton was asked about the difficulty of obtaining small business loans for people with a criminal background. Clinton replied those people shouldn’t have such restrictions, but then expanded upon the question to include voting as well. “I think if you’ve done your time, then you’ve made your commitment to go forward, you should be able to vote,” she said (around 1:55 in the below video).

The press has been complaining for weeks about Clinton’s lack of interaction with reporters. Many pointed out she’s only taken about a dozen questions since announcing her candidacy over a month ago. She finally relented today and addressed the throng of eager reporters after the roundtable was finished. A frenzy ensued, but Clinton did address several pressing issues. It was a little odd to listen as one reported shouted out, “Why do you think you’re so special that you don’t have to answer the press’ questions”… right as she was answering questions from the press. Watch the madness below:

Clinton addressed two major topics following her in the news. With Jeb Bush’s fumble of his Iraq War answer, many were eager to hear Clinton’s views again on it. She responded with:

I’ve made it very clear that I’ve made a mistake, plain and simple … what we now see is a very different and very dangerous situation. The United States is doing what it can but ultimately this has to be a struggle that the Iraqi government and the Iraqi people have to win for themselves — and we can provide support, but they’re gonna have to do it.

I have said repeatedly I want those emails out. Nobody has a bigger interest in getting them released than I do. I respect the State Department. They have their process that they do for everybody, not just for me. But anything that they might do to expedite that process, I heartily support.