It’s been a busy month for Bryce Smith. The owner of an Adel bowling alley was among five other small business owners to talk with Hillary Clinton at roundtable meeting in Norwalk on her first official campaign swing. His name and issues were the first mentioned by Clinton in a Des Moines Register op-ed earlier this week. Now he’s running for the Iowa House in District 19.

The 23-year-old Democrat is a recent graduate of the University of Northern Iowa, where he studied political science and education. He grew up in De Soto in Dallas County, went to ADM High School and recently returned to live in Adel. He now owns and operates Adel Family Fun Center, the bowling alley where he worked at as a teenager. This year he’s also worked at the Legislature as State Representative Timi Brown-Powers’ clerk in the House.

Smith called running for office in his campaign announcement yesterday “an act of civil service, not a career.” He sees education and small business assistance as the top issues for his district. “Education is a huge aspect of our community – we have a lot of beginning families, families that have lived here all their lives, grandparents,” Smith said in an interview of the rapidly-growing communities in the district. “Everyone in this district is connected to it – whether they work there, they send their kids there, they live by it, or they pay taxes to it.”

On economic issues he draws from his own experience in running a business. “As a small business owner I see a great need to expand our so-called corporate tax environment to a more inclusive all-business environment,” Smith says.

Three weeks ago Smith was asked to participate in a round table on small businesses hosted by Clinton as part of her initial listening tour through Iowa. Bryce explained to Clinton how his student loan debt made it more difficult to obtain small business loans. He also related how his partner has epilepsy, and that if it were not for President Obama’s Affordable Care Act, they might not be covered and have to pay thousands of dollars every month for the medication. Smith also elicited some of the funniest moments as Clinton commended him on his businesses, saying, “We need more bowling. Everybody needs to go bowling.” She asked Smith how often his bowling alley was open, mentioning she’d be back in Iowa a lot.

Smith says that he was already seriously considering a run for the Iowa House for months, but that the small business roundtable with Clinton help “pulled the trigger on giving me that boost from fellow business owners and someone higher up in the political system.” He says discussing issues with the attendees and Clinton was very useful in “seeing that those small interactions can make a huge difference in policy-making down the road.” 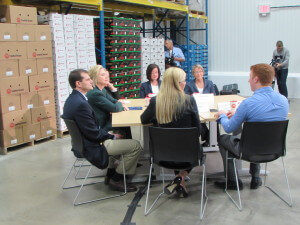 A lot of that policy progress, however, isn’t getting done in the Iowa House, something he hopes to change. “We think as the public that compromise is something we do on a daily basis,” Smith says while discussing what he’s learned from his time at the Statehouse. “What I see right now in the House … is that there’s no compromise. The Republican Party and the Democratic Party are both coming in with a chunk of the pie, and Democrats are willing to trade some of that for something else, and the Republicans are coming to the table saying, ‘we don’t want any of that pie. We have our own.’ Well that’s not compromise.”

Pulling off a win in HD 19 will be no easy task. There’s nearly double the number of Republicans as Democrats, with 8,658 Republicans, 4,748 Democrats and 9,007 No Party voters registered there. The current Representative, Ralph Watts, has served since 2003. In the last presidential year of 2012, Watts won with 58%. Democrats have kept their eyes on some of the rural and suburban districts around Polk and Dallas Counties as younger families move farther out, but it’s questionable whether HD 19 has reached that level of opportunity yet. The district covers most of rural Dallas County and a small sliver of Polk County around Polk City. Adel, Van Meter, Dallas Center, Granger and several suburban Urbandale neighborhoods comprise the population centers of the district.

Still, from his time clerking in the House Smith should have plenty of friends willing to help out. His profile as a small business owner should help with Republican-leaning independents in the district. And who knows, maybe if Clinton really does swing by Smith’s bowling alley in her later Iowa travels, it’ll be for a joint campaign rally.