Iowa Republicans were treated to a nine candidate speech-a-thon on Saturday night at the Faith and Freedom coalition’s event at a Waukee church. It’s always difficult figuring out how to condense so much information into one write-up, but here’s my best attempt with the key takeaways that stood out to me:

The Standouts: Jindal and Fiorina

Perhaps it was partially from overcoming low expectations, but Bobby Jindal and Carly Fiorina were breakout stars Saturday night. Jindal’s speech was the best I’ve ever seen from him. He concentrated on his parents’ immigration from India and his personal journey with faith, adding in plenty of religious liberty-themed red meat lines. He got a standing ovation midway through his speech and finally seemed to connect with his natural base within the party. I’ve wondered for a while if Jindal would ever really get off the ground. More performances like these and he won’t be an afterthought. However, he said he’s waiting to announce until June or later, so he’ll need to really catch fire late in the game. 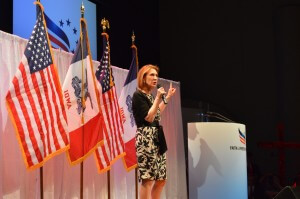 Fiorina also impressed with an exceptionally strong performance. This wasn’t her typical audience (and I’m still not sure what her base is), but she got some of the loudest and most wild applause of any speaker. Fiorina hit Hillary Clinton right at the beginning of her speech and didn’t let up. “When the general election rolls around, we better have a nominee who can throw those punches all day long,” she said, clearly making the pitch to Republicans that she’s best suited to take on Clinton. While she’s an extreme long-shot for the nomination, just having a female in the race should help Republicans’ image. Fiorina plans on announcing her candidacy next week on May 4th. 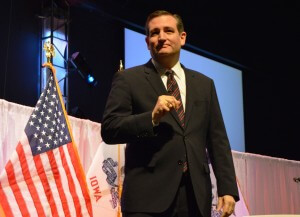 While Jindal and Fiorina surprised people, Ted Cruz demonstrated he’s still currently the right’s hottest star. Throwing out attacks on Democrats more incendiary than in previous speeches, Cruz whipped the crowd into a frenzy with his typical strong delivery of right wing zingers. On specific issues, however, he mostly targeted a handful of “religious liberty” cases around the country, pointing to them as evidence that Democrats are waging a war on Christianity. That’s fine and all, and plays well to the audience, but Cruz too often sticks to fun one-liners instead of laying out a broader idea of what a Cruz presidency would do on the economy or other major issues.

Rand Paul’s focus was even smaller, concentrating nearly half of his speech on foreign aid, which makes up about 1% of the federal budget. To his credit, he did very well in front of a crowd his father had zero chance with. Most of that was because he lambasted America’s foreign aid to Muslim countries, claiming Christians are being persecuted around the country with American taxpayer money. Paul related one story of a Pakistani woman stoned by Muslims who chanted “death to the Christian,” then pointed out that America sends billions in aid to Pakistan. “Let’s don’t give money to countries that burn our flag,” Paul said. “Counties that persecute Christians shouldn’t get one penny of our dollars.” That would presumably include America itself the way others spoke of domestic religious persecution from the government. It was the most cynical pander of any candidate, but I suppose Paul needs some fraction of support from voting blocs outside his libertarian base. 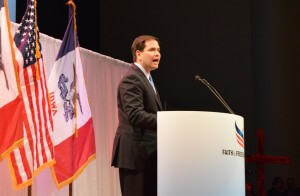 Others played to the crowd. Rubio sounded like a president. First up to speak, Rubio didn’t get many applause lines, but he held the audience’s attention with a broad, over-arching vision for America in the 21st Century. He talked about his immigrant family’s journey from Cuba, America’s role around the world, dangers from nuclear nations, and the American Dream. Rubio closed with a story of the day his grandfather died, remembering how he rode with him to the hospital. Rubio said he told his grandfather that he would study and take advantage of the opportunities America presented that his grandfather never experienced.

Rubio only briefly touched on social issues, but since this was his first major Iowa event after announcing, perhaps he’s still focused on his campaign roll-out. He’s a hell of an orator, and his cadence and delivery actually reminded me of Mario Cuomo (which if you know me well, that’s one of the best compliments I can give). His goal is to cobble together a large enough coalition from multiple Republican Party factions to ascend to the top. It’s an open question whether the evangelical audience will remember in the weeks to come his speech or the more exciting red-meat ones of others. If Republicans were smart, they’d pay very close attention to Rubio. And if Rubio were smart, he’d start spending more time in Iowa. 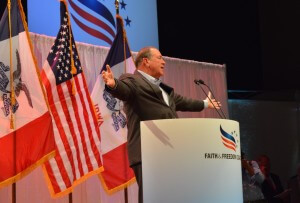 The evangelical base still adores Mike Huckabee and Rick Santorum, both past Iowa Caucus champions. But there’s flashy new stars out there hustling for the religious right’s vote. Mike Huckabee gave a well-received speech Saturday night, but it notably lacked the kind of excitement and magic other speakers elicited. He did give a couple on-point lines to the crowd, at one point suggesting, “We are criminalizing Christianity in this country.” Still, he was one of the few speakers to stand behind the podium, and the difference in energy showed. 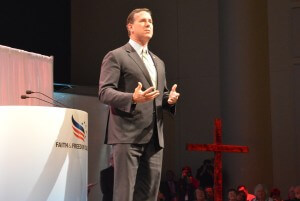 Rick Santorum, on the other hand, barely touched on social and religious issues. Maybe he feels his legitimacy on that is already cemented. If he wanted to, he could probably have these crowds on their feet relating his history of activism on abortion and religious freedom. Instead, he continued to focus on his blue collar conservatism approach, imploring the crowd that Republicans must talk more about working class voters. He even pitched a raise in the minimum wage. Santorum also focused a lot more on foreign policy, a common refrain from the night’s speakers. It will be a shame if Santorum struggles to build support in the polls or places poorly at the Iowa Straw Poll. He’s saying some of the smartest, most unique things in the Republican field.

We Get It Rick, You’re Excited 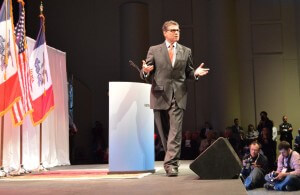 The first time I saw Rick Perry speak in person this year, I was impressed by his enthusiasm-packed performance. He badly wants to make up for his poor 2012 run, but he’s starting to over-do it. What first seemed energetic now feels tiresome. Moreso, it appears fake. He can’t possibly be that super-excited all the time. He gave a very good personal story about finding his faith at the event, but his overall stump speech lacks a presidential vision, swapping substance and specifics for passion and hand gestures. Switch up the script a bit, Governor. The schtick is getting old. 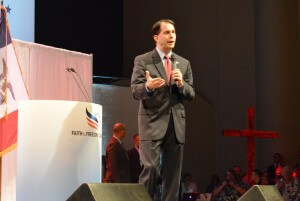 He started out a little dull, but Scott Walker finished strong as the last speaker of the night. He was the only person to bring a prop on stage with him, reading from a devotional book one of his favorite passages. He gave a good story about how his faith helped him through the recall elections, and about the passage that a friend gave him in case he lost, which he found deeper meaning in after his victory. It connected well with the crowd, and was a smart move.