Good morning readers! As always, a lot happened in the political world this week. Enjoy our Sunday Grab Bag of shorter takes on a number of Iowa and national political topics:

Buckle Up, Hillary, SNL is Back

Finally, are Saturday Night Live political sketches going to be funny again? Last night’s certainly was, with the exceptional Kate McKinnon portraying Hillary Clinton once again for a skit where Clinton prepares her announcement video. McKinnon could soon be a breakout star here, because she actually understands that you’re not supposed to mimic the politician perfectly, you’re supposed to make them into a funny character. “Aren’t we such a fun, approachable dynasty?” she asks after Daryl Hammond/Bill Clinton pops into the scene. Her desire to be her own Vice President and her first attempt of “Citizens! You will elect me! I will be your leader!” was perfectly acted. Oh, and good news Martin O’Malley: they may have used your candidacy’s chances as a punch line, but at least you’ve risen to the level where you’re mentioned on SNL!

SNL actually has a pretty funny cast right now, it’s just that the writing sucks so badly their talent doesn’t always shine through. Hopefully the political skits can get constructed a little better – this primary season will be a gold mine if so. McKinnon’s potential success could also have a real impact on how Clinton’s image-makers calibrate their strategy. Amy Poehler’s Clinton portrayal in 2008 was largely sympathetic and feminist-focused. McKinnon’s is manic and power-hungry. We all know how influential SNL has been in the past in setting public perception of well-known politicians. 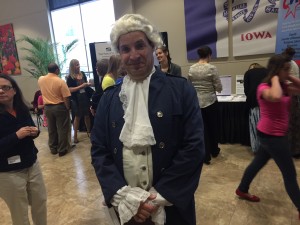 went by the NICHE Homeschool conference on Thursday to see Republicans Ted Cruz, Bobby Jindal, Rick Santorum and Mike Huckabee address the mostly-evangelical crowd. I simply ran out of time this week to write about them, or the other multi-candidate Republican event I attended that featured Santorum, Jindal and Rick Perry (that was a forum on energy – Santorum was the only one who spoke about the RFS and all Jindal did was complain about the EPA for nearly his entire speech). But I did  want to share this sweet picture I got of the George Washington impersonator who warmed up the home school crowd. Some might say having goofy actors speak before serious presidential candidates makes your party look like a sideshow, but I would disagree. These speech-a-thons are dull enough, it’s nice to see the Republicans have a little bit of fun. Plus, it’s not like the Democrats’ field of candidates doesn’t have at least one person (O’Malley) who enjoys doing a little historical re-enactment.

Sam Gray announced on Thursday he plans on running as a Democrat against Republican freshman State Rep. Ken Rizer in Linn County’s Marion-based district. Gray is young – very young – at age 20, a student at Kirkwood and a delegate to the national DNC convention in 2012. In a release he says he’s “running to be an advocate for the middle class, our public schools, livable wages, and the protection of natural resources. John Deeth had a good write-up of his candidacy and the district, so check out more information there. 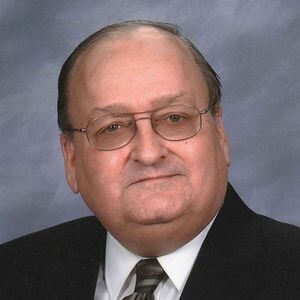 I was very sad to learn that Bart Rule had passed away last week, an old legend in Iowa politics from decades past. He served as the chief of staff to Senate Majority Leader Jim Schaben back in the ’70s, then headed the Iowa Association of Municipal Utilities and was a lobbyist for a number of years. Everyone who worked in the Iowa Capitol crowd in the ’70s and ’80s has several good Bart stories. He was a great public servant who cared deeply about Democratic social programs and was an outgoing friend to many, but he was also a bit of a hard partier, a lifestyle which seemed to catch up with him eventually. He lived out many of his last years with his mother back in his hometown of Dunlap.

Most of all, Rule was involved in every major Iowa Democratic campaign for decades, especially the caucus, and was one of Jimmy Carter’s important supporters in the state. I got to know him during the 2008 Caucus, when he served as our county coordinator for Hillary Clinton in Harrison County (which we won big). He was a lot of fun to hang out with in his living room and just chat about past campaigns over coffee. He had endless stories, several of which can’t be repeated in polite company. After the 2008 campaign, whenever I had an extra hour on one of my many drives through Western Iowa, I would detour up highway 30 to Dunlap and drop in on him for a bit, sharing the latest news in Iowa politics (he was always particularly interested in Branstad’s comeback). Bart Rule will be very missed by a lot of people.

So Hillary Clinton announces today, then comes to Iowa, likely on Monday. Call it a hunch, but I got this feeling that this could be a big story. Early this week will focus on her campaign launch, and then thankfully it looks like things will cool down for a bit. By the end of Monday, I will probably have seen eight candidates at seven different events in just a few days. It’s exciting, and caucus time is really here, but I could use a day to regroup and refocus on a few non-presidential Iowa stories.

Thanks again to everyone for visiting the site recently – over 5,500 views in all this week. We just keep chugging along.