Good morning readers! A lot happened in the political world this week in Iowa. Enjoy our Sunday Grab Bag of shorter takes on a number of Iowa-based topics:

Over the lunch hour on Friday, Florida Senator Marco Rubio stopped by the West Des Moines Barnes and Noble to sign copies of his book, “American Dreams.” He got a good crowd, with well over 150 people standing in line. He mostly chatted briefly with each person as he signed their book, not making any major speech at the event. Some notable observations:

SNL alum and likely 1st District Congressional candidate Gary Kroeger traveled to New York City this weekend for the SNL 40 Year reunion party. The big question for whether Kroeger can run a legitimate campaign is if he can convince enough of his old acting connections to financially support him. If so, he would have a great and unique network to raise money from. He told the Register this week he’s waiting until the spring to decide. Kroeger’s getting a lot of press this week, but remember: Starting Line first broke the news of his interest in a Congressional run about a month ago with our very first post.

Here’s a pretty funny clip of him from SNL doing a Walter Mondale skit. 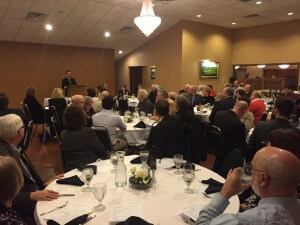 I’ve been to plenty of county party fundraisers that weren’t nearly as well-attended as the Ankeny Area Democrats‘ winter function this last Thursday. Well over 100 Democrats came out for a dinner with speeches from IDP Chair Dr. Andy McGuire, Senate Majority Leader Mike Gronstal, and House Minority Leader Mark Smith. Ravi Patel was also spotted at the front table. Ankeny Democrats’ chair Matt Pfaltzgraf runs a good crew up there. Other counties and suburbs should look at their success for a model for organizing.

In the future I’ll add in Sunday wrap-up posts a run-down of the best national, state and local takes on Iowa politics and the Iowa Caucus. Today I’ll just point out two exceptional takes from Iowa bloggers:

Big Week Ahead for Starting Line

Make sure to check in every morning this week with Iowa Starting Line! We’ve got some great posts lined up – a “Rising Star” profile, a funny The Bachelor-themed take on the Republican field, and rumors. Plus another “How to Win ____ County,” as I’ve gotten good feedback on how much people liked the first one. Oh, and Bernie Sanders is coming to the state.