It was after midnight on May 20, 2021, but every face in Gov. Kim Reynolds’ private office at the State Capitol Building was full of maskless smiles. They had succeeded. Reynolds signed a law that banned schools from requiring masks.

At the governor’s shoulder, two Central Iowa moms stood with wide grins and big signs. One sign claimed masks were child abuse and the other featured a picture of the woman’s daughter with the words “My mask caused a staph infection on my face four times. My body, my choice. Unmask Iowa.”

The ban was their victory most of all.

At the height of the pandemic, when leaders were grappling with how to continue living safely, Kimberly Reicks and Emily Peterson rose up to oppose the most straightforward safety precaution: students being required to wear masks to reduce the spread of COVID-19 in school buildings.

Reicks and Peterson, who called themselves the Iowa Mama Bears, were so loud in their opposition to masks, they got the attention of Iowa Republicans in the legislature and Gov. Kim Reynolds who used the controversy to ban school mask requirements in Iowa.

Just hand delivered HF847 to @KimReynoldsIA desk. Parents, now you get to make the choice on whether your kids will wear a mask or not. #ialegis pic.twitter.com/6FUFn2JE6q

“We were in shock and awe,” Peterson told the Des Moines Register after the signing. “Thankfulness that cannot be described…all of our efforts were not in vain.”

“Through our persistent efforts, we helped get a law passed banning mandatory masks in schools and public businesses in the state of Iowa,” Peterson wrote in a June Facebook post. 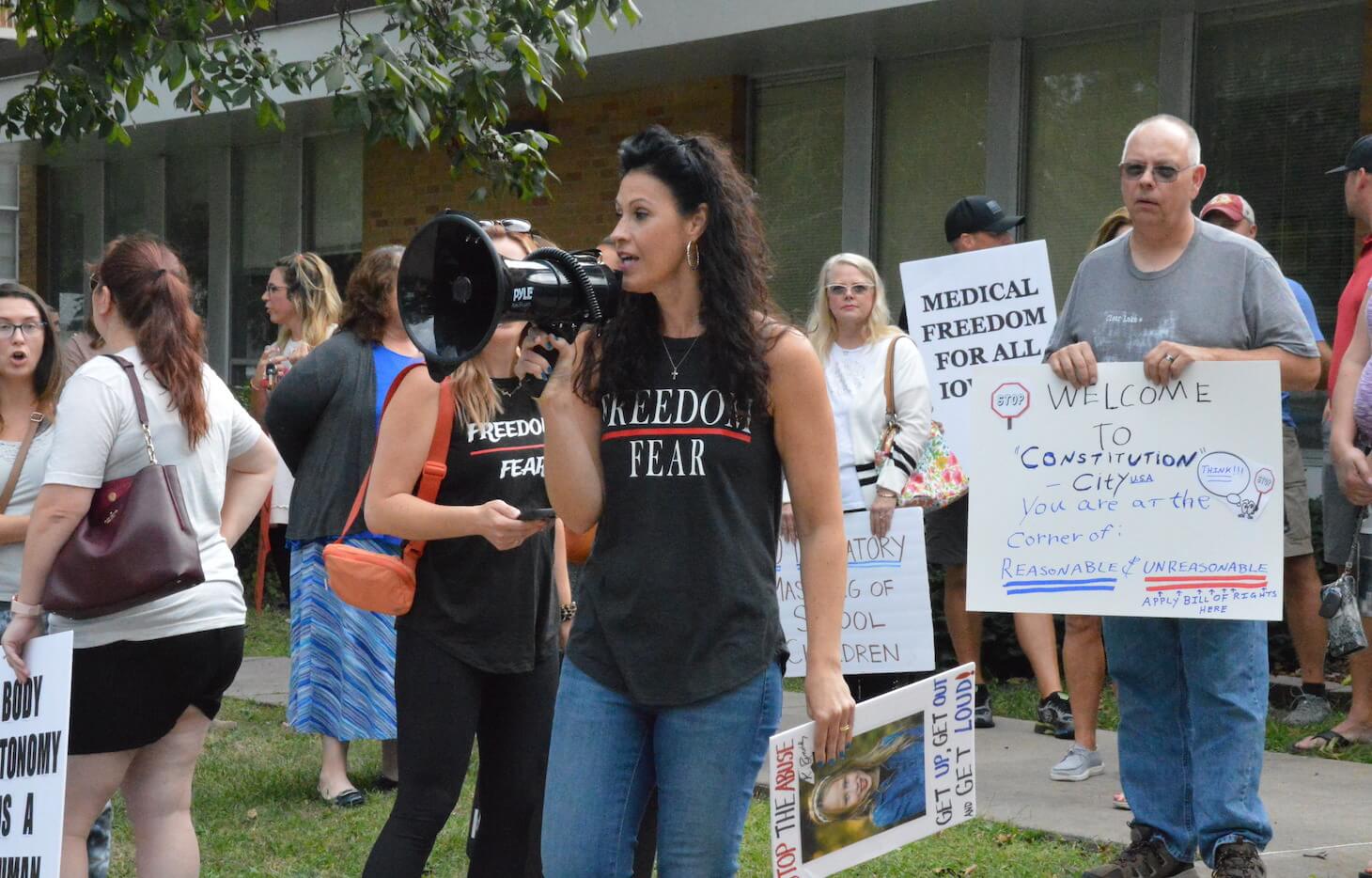 Their influence continued on, and Reynolds often made reference in the months and year ahead of what she had heard from local activists about schools, which would soon turn toward LGBTQ issues, of which the Mama Bears appeared to be most prominent in her ear.

The same day the Mama Bears stood shoulder-to-shoulder with Reynolds and other Republican Iowa politicians and activists, they filed paperwork with the state to create the Freedom Over Fear Co. and sell merchandise adorned with that slogan.

The Mama Bears were applauded in conservative and far-right circles nationwide for their work in Iowa. They even received the Fearless Fighters for American Values award from Gen. Michael Flynn, a QAnon supporter who runs the right-wing America’s Future nonprofit and worked briefly in the Trump administration.

They attended the Health and Freedom Conference in Broken Arrow, Oklahoma, in April 2021, where conspiracy theories about COVID-19 and the 2020 election were discussed. And they won support from other conspiracy theorists, including those who believe in QAnon. The Mama Bears have toured the country and shared the stage with other prominent figures on the right including Candace Owens and Mike Lindell since gaining notoriety.

However, something went wrong with the partnership this year. In March, the Mama Bears celebrated their one-year anniversary in a video posted on their Rumble channel and they posted another video on April 16 followed by months of silence on the channel.

The next update came on Aug. 6, but it only featured Reicks and a new co-host. Four days after that video came out, Peterson filed for a protective order against Reicks.

“Kimberly Reicks has increasingly threatened me and my family. She is a former business partner who threatened to ruin my life,” she wrote when filing. “I am afraid for my family’s safety.”

Peterson also said she suspected Reicks made a false claim to the Iowa Department of Human Services (DHS) about abuse in Peterson’s home. She also referenced documentation of threats and police reports she’d made, as well as Reicks’ history of criminal activity.

On Friday, Reicks was arrested on charges related to those false claims, including one for false report of an indictable offense to a public entity, two counts of child abuse-false report and four counts of harassment.

“Criminal complaints in the matter said Reicks made an anonymous call to DHS on August 8th, claiming one of Peterson’s children had sexually assaulted a sibling. DHS investigated and deemed the allegations were false … Police said the story Reicks told DHS did not match up with what her daughter told investigators,” WHO-13 reported.

After DHS investigated and ruled the allegations were false, Ankeny police subpoenaed information about the anonymous call, including an earlier one made in May, and confronted Reicks with audio recordings after she initially denied calling DHS.

After hearing the recordings, Reicks admitted to making the false calls.

Peterson’s original protective order was dismissed, but she is no longer part of the Mama Bears group. Reicks replaced her with Michelle Lindell, former co-owner of the Sweet to Eat Bakery and Cake Shop in Ankeny, who was introduced in that Aug. 6 Rumble video. A new episode of the Mama Bears podcast also dropped on Aug. 6 and it was titled “A New Beginning!”

Reicks and Lindell continue to operate as the Mama Bears while Peterson launched her own organization, Love and Live Truth.

The situation with Peterson was not the first time Reicks has been in legal trouble.

In March, Reicks was arrested for destroying someone’s mattress and clothing at 3 a.m. The crime was witnessed by two friends of the victim and one of her adult daughters was with her.

The report says Reicks told the witnesses, “You can tell the cops I did this.”

She has also been charged with domestic abuse and assault with injury in the past.

In June 2021, she sued the Ankney Community School District over the mask mandate it had in place in 2020 and 2021. Reicks lost the lawsuit in September. Her attorney, Alan Ostergren, appealed the decision to the Iowa Supreme Court.

In the lawsuit, Reicks alleged the school was retaliating against her daughter because of Reicks’ campaign against masks.

Despite the setbacks, the influence of the Mama Bears hasn’t quite waned. The group has pivoted from fighting mask mandates to the current right-wing push to paint the LGBTQ community, and any information about the community, as inherently predatory and inappropriate.

On this issue also came Reynolds, who embraced early on the right’s push against LGBTQ-themed books while citing local activists as her source of knowledge.

“Do I think inappropriate things are being displayed in libraries, and in classrooms, across the state? From what I’ve heard from parents, I absolutely agree with that,” Reynolds said in an interview with KCCI this January.

Reicks has pushed to ban books in the school and took credit for the Nov. 2021 banning of “Gender Queer,” a graphic novel about being nonbinary and asexual.

Most recently Reicks made headlines for a stunt she pulled at an Ankeny school board meeting on Oct. 3. There, she demanded answers about a small drag show hosted after-hours, by the Ankeny High School student Gay Straight Alliance (GSA) in the spring. The event was held without approval from the school administration.

To make her point about it being inappropriate, Reicks stripped down to a leotard in front of the board, in an outfit reminiscent of what the student performer wore.

The story, originally reported by the Des Moines Register, has spread to outlets like the Daily Beast and some LGBTQ news organizations such as LGBTQ Nation.

In a Facebook post celebrating how the story had spread, Reicks told people to reach out to state legislators “over and over again and again this session and get this crap stop [sic] for good.”

Holt even replied, saying, “Agree. We need to pass legislation in the coming session stop this [sic]. Anyone who brings a drag show to school should be terminated and have their teaching license permanently revoked. My opinion.”

This ignores that teachers weren’t involved in the high school student-organized performance.

Reicks has welcomed the ridicule that has come from her often-public outbursts, usually at Ankeny school board meetings. Mostly because it gives her a platform, and that’s what she wants.

“I hope to God this goes viral and people laugh at me for the outfit that I’m wearing today,” she told the board while ranting that the board should make a policy against it (she didn’t specify what the policy should ban).

And she has the support of some of the most powerful people in Iowa.

Iowa Starting Line is part of an independent news network and focuses on how state and national decisions impact Iowans’ daily lives. We rely on your financial support to keep our stories free for all to read. You can contribute to us here. Also follow us on Facebook and Twitter