After a fight to hire him in the first place, Louis Fountain resigned as the Johnston Community School District’s director of diversity, equity, and inclusion (DEI).

Fountain resigned on Aug. 26 and during a regular Johnston School Board meeting on Aug. 29,  the board decided to wait to repost the position.

Director of Communications and Board Secretary Lynn Meadows said every time a position is vacated, the school district reevaluates the position, which will happen to this one created last year.

Fountain’s resignation marks the sixth executive-level departure in Johnston in the past year. It’s left parents wondering what’s going on.

On Facebook, some Johnston parents expressed concerns Fountain’s position won’t be filled at all, especially since there isn’t an audit underway. Others have wondered who will interpret the data from the audit if there’s no DEI director. Parent Kevin O’Connor spoke to the board asking for an investigation into why Fountain resigned.

Fountain’s resignation letter, obtained by Starting Line, doesn’t mention a specific reason for his departure. He merely stated his resignation, offered to help during the transition period, and thanked the district for the opportunity. 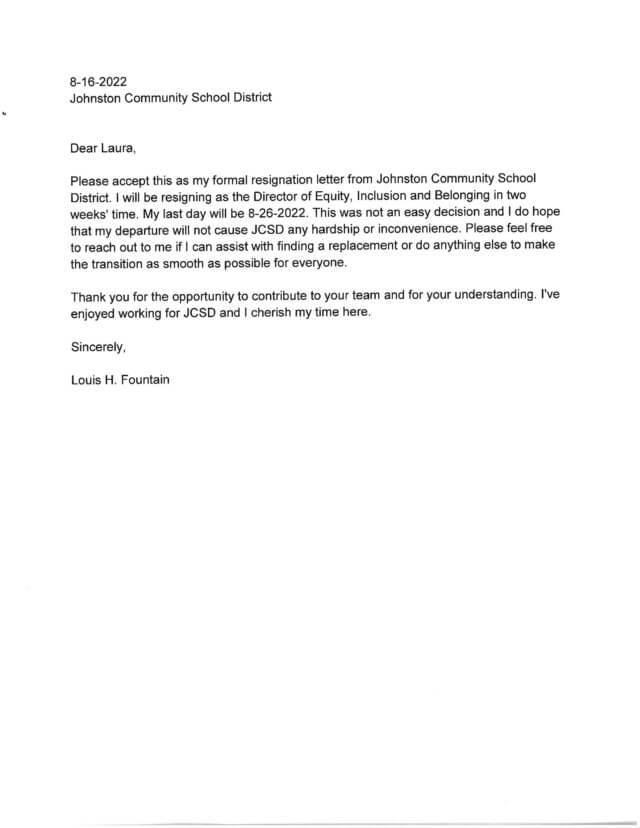 Fountain had the job for 15 months and now works at Des Moines Public School District as a coordinator for elementary schools.

Katie Fiala, president of the Johnston school board, said at the Aug. 30 meeting she wanted to wait to repost the position until the board sees results from an equity advocate.

“It could give us direction as we’re looking to rehire if we need to change the job description or use the same one we have,” she said.

Until then, Superintendent Laura Kacer will fill in some of the duties. At the school board meeting, she brought up the prospect of the district conducting an equity audit and said she would have more information for the board at the next meeting on Sept. 12.

This year, Ankeny Community School District took part in a diversity, equity, and inclusion audit which identified a number of issues including widespread student use of racist and homophobic slurs, that many students don’t feel safe, and that teachers broadly don’t know how or don’t have support to handle problems.

West Winds Education Policy Inc. based in Iowa City conducted the audit. The study also highlighted positives such as graduation and attendance rates and had suggestions for fixing the issues.

Kacer said West Winds would do Johnston’s audit as well.

The audit results led to a framework for improvement that was approved by the Ankeny School Board in May. In the middle of all of this, in April, an Ankeny DEI position was also removed with the board citing the need for audit results before they went forward with the position.