Unionized workers at Ingredion in Cedar Rapids have held the line for a month, striking to keep their pay, benefits, and retirement intact, and in support of those who would lose their jobs.

“We’re hanging in there,” said Mike Moore, president of the local union. “We’re getting through it.”

Workers affiliated with the Baking, Confectionery, Tobacco, and Grain Milling union in Cedar Rapids, known as BCTGM 100G, will hold a rally at Lucita’s Diner—across from the Ingredion entrance—at 6 p.m. Thursday, Sept. 1. 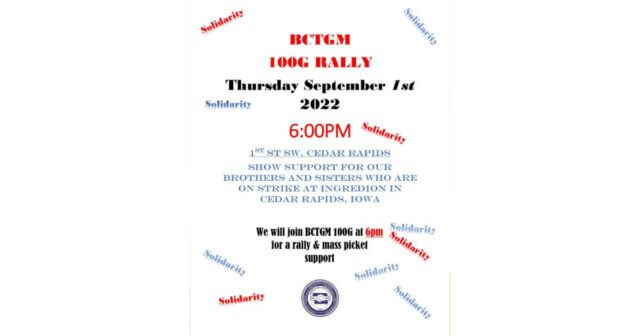 Moore previously said the company wants to eliminate five test lab positions, increase workers’ insurance rates without corresponding wage increases to cover it, won’t move eligible Tier 2 workers up to Tier 1 pay, change the way vacation and overtime is scheduled, and not allow the union to have a say in management changes.

That’s despite an increase in Ingredion’s profits: The company’s second-quarter earnings, out Aug. 9, showed sales growth of 16% and adjusted operating income up 3% over 2021.

“They want to do a a lot of ‘surface bargaining,’ is what we call it,” Moore said. “They want us to give up a whole bunch of stuff just to get minor stuff,” like an extra $10 for each worker to purchase mandatory steel-toed shoes, he said.

Moore said BCTGM has offered to walk back several provisions to come to an agreement, but the company isn’t budging on items like premium increases in health care policies, overtime rules, and the elimination of the five positions.

“We took out a bunch of stuff we could live with and possibly make work. Now, they want another one,” Moore said Wednesday. “We drew a line in the sand.”

The company released a statement Aug. 10 saying they “bargained in good faith and on a regular basis” with BCTGM. The company said its last offer before the strike included “market-based wages” with “guaranteed annual increases” of between 3.5% to 7.4%, the creation of “new positions that offer additional opportunities for advancement,” and “a more comprehensive health insurance plan … that significantly outweighed the slight premium increase.”

“We believe that this offer was very favorable and achieved numerous mutually beneficial items,” Ingredion said in that statement.

The company told Starting Line they had no further statement on Wednesday.

The last Ingredion Cedar Rapidstrike was in 2004, when the company was called Penford, lasted for 78 days.

Ingredion, headquartered in Illinois with locations in 26 countries, makes “sweeteners, starches, nutrition ingredients and biomaterials” for use in “everyday products from foods and beverages to paper and pharmaceuticals,” the company says on its website. It has one location in Iowa, the Cedar Rapids manufacturing plant at 1001 First St. SW.

Moore said the strike has been difficult on members, but “everybody’s still hanging strong.” That’s thanks to support from local restaurants bringing in food to picketers, money to help with members’ bills coming in from unions across the country, and community members honking, bringing water or picketing with them.

“The community’s been absolutely great,” Moore said, joking he wanted to take out a billboard thanking residents after this was all over. “We’re standing strong. We’re going to be out one day longer than the company. And we will get a contract.”