Former Vice President Mike Pence’s Secret Service detail was “screaming” as they tried to get the vice president out of the Capitol safely on Jan. 6, 2021 and so feared for their own lives that they radioed goodbyes to their family members.

This revelation came from a former White House national security official, who testified anonymously for their own protection.

“The VP’s detail thought that this was about to get very ugly,” the witness said in testimony aired  on Thursday during the latest hearing of the House committee investigating the Jan. 6 attack.

Their fear was well-founded, as the violent mob ransacking the Capitol was chanting “Hang Mike Pence” and had been egged on by former President Donald Trump earlier that day.

This detail was one of many new pieces of information learned during the eighth hearing investigating the violent attack on the U.S. Capitol on Jan. 6, 2021.

One by one, former Trump loyalists and administration officials testified about how for more than three hours on Jan. 6, Trump did nothing to stop the attack on the Capitol. Instead, he ignored pleas from top aides, Trump-backing Republicans in Congress, and his own family members to issue a public statement telling his supporters to leave the Capitol.

Worse, Trump incited the rioters further by issuing this tweet: 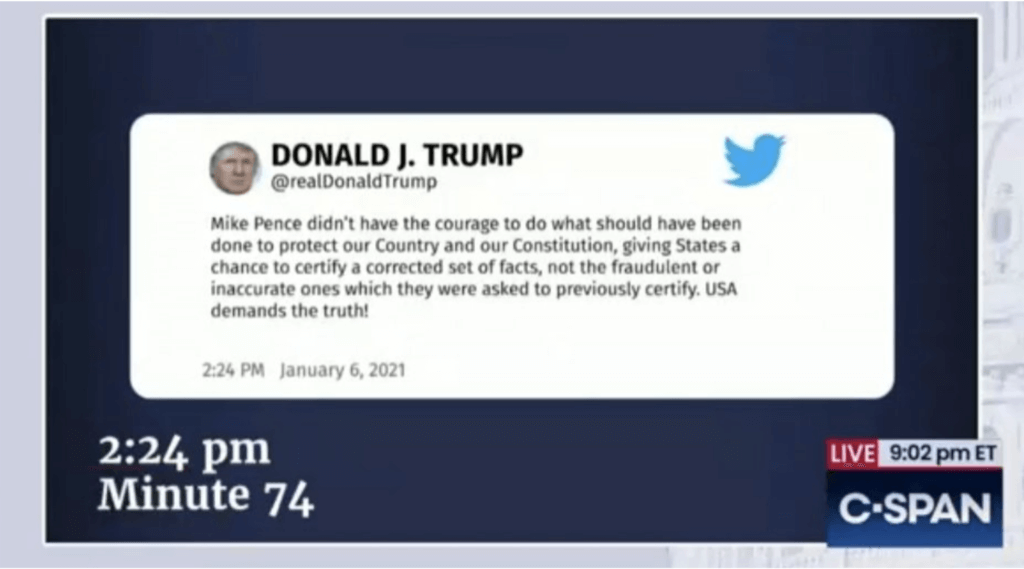 The tweet forced Pence to be evacuated a second time as the attacks at the Capitol escalated.

“He shouldn’t have been doing that,” Sarah Matthews, the president’s deputy press secretary, said of Trump’s tweet. “He should have been telling these people to go home and to leave and to condemn the violence.”

Matthews viewed Trump’s tweet as giving his supporters a “green light” for violence.

“I’ve seen the impact that his words have on his supporters,” she said. “They truly latch onto every word.”

Here are Five other takeaways from Thursday’s hearing:

After more than three hours, Trump finally told his rioting supporters to go home. But in that speech, he also continued to spread election lies, said the violent mob was “very special,” and told them that he loved them. On Thursday, the committee aired never-before-seen footage of outtakes of Trump’s speech.

Never-before-seen raw footage of Trump recording his message in the Rose Garden. pic.twitter.com/yDZsQ3zZfM

Matthews said she was struck by the fact that Trump opened his speech by once again pushing the lie that the election was stolen and only after that directed his supporters to go home.

The committee also aired outtakes of Trump’s Jan 7. Speech, in which Trump—after learning that his cabinet was considering invoking the 25th Amendment to remove him from office—condemned the violence and promised an “orderly” transition of power. Notably, though, Trump refused to say the election has ended.

“I don’t want to say the election is over. I just want to say Congress has certified the results,” Trump said during the outtakes.

In fact, to this day, Trump has still not acknowledged that the 2020 election is over and that he lost.

According to video testimony from Gen. Mark A. Milley, chairman of the Joint Chiefs of Staff, Pence gave orders to the military to clear the Capitol and stop the violence.

“Get the military down here. Get the Guard down here. Put down this situation!” Pence said, per Milley.

Other lawmakers also pleaded with acting Secretary of Defense Christopher Miller to help, all while Trump remained silent.

Milley also testified that Trump’s chief of staff, Mark Meadows, called him to say they needed to push the political “narrative” that Trump was still in charge and that Trump was making decisions, even though Pence was actually the one taking action.

Retired police sergeant Mark Robinson was in Trump’s motorcade on Jan. 6 alongside a Secret Service agent. Robinson told the committee that he was told there was a “heated argument” about whether Trump should be allowed to go to the Capitol, backing up former Trump aide Cassidy Hutchinson’s testimony about Trump’s behavior and state of mind that day in a previous hearing.

Robinson, who said he’d served in more than 100 motorcades during his career, added that he’d never observed or heard of another president getting into an altercation or disagreement with the Secret Service that way.

An anonymous national security aide also confirmed that they had heard about a conflict between Secret Service agent Bobby Engel and Trump, who was “irate” that Engel wouldn’t allow him to go to the Capitol.

The committee played never-before-seen footage of Sen. Josh Hawley (R-Missouri) fleeing from the Capitol building just hours after raising a fist in solidarity in front of the same mob of Trump supporters.

Hawley, a Trump Republican who helped spread lies about the election being stolen and pushed a lawless effort to block certification of the results, was widely mocked after the footage aired, with the clip garnering millions of views online within hours.

Two of Trump’s top presidential campaign officials criticized Trump’s silence on the death of Brian Sicknick, a Capitol police officer who had been injured during the attack.

“Everything he said about supporting law enforcement was a lie,” Wolking added.

Murtaugh then put two and two together, saying that if Trump acknowledged the officer’s death, “he’d be implicitly faulting the mob.”

“And he won’t do that because they’re his people. And he would also be close to acknowledging that what he lit at the rally got out of control,” Murtaugh texted. “No way he acknowledges something that could ultimately be called his fault. No way.”