Every year, volunteers from across the state and beyond work together to pull, drag, dig and carry trash out of an Iowa river chosen by the leaders of Iowa Project AWARE (A Watershed Awareness River Expedition).

And this year, I joined them for a day on the West Fork of the Des Moines River up in Northern Iowa.

The volunteers were breaking camp at Wolden County Park, just outside of Wallingford, when I got there around 7:30 a.m. on Wednesday. Founder and board member Lynette Seigley quickly got me equipped with the supplies I’d need: a dry bag—where I stashed my sunscreen, notebook and pens—a carabiner with my name—their method of keeping track of everyone on the river—a lunchbox, and my paddling partner Rick Dietz.

Dietz is also on the board for Iowa Project AWARE and he’s also an 18-year veteran of the 19-year volunteer project. He did the work of steering our canoe down the nine-and-a-half miles of river planned for the day.

Project AWARE lasts from Sunday to Friday, and all the trash is sorted, tallied, and taken off to be recycled or handled by partners such as Bridgestone Tire Co.

Dietz and I were in the second group of approximately 200 volunteers to get out on the river just outside of Graettinger, Iowa.

Almost right away we saw a group wrestling with a refrigerator and rusted car parts on the river bank. As we passed, other canoes paddled up and asked how they could help.

By the time we floated past, the volunteers were shifting the refrigerator toward the edge of the bank so they could roll it into one of the canoes, or into the water. Dietz said he’d handled refrigerators before and they were easy to attach to the canoe and float behind you.

There was a lot more of that.

Most of the trash pulled on Wednesday was heavy metal, tires and parts from vehicles.

The camaraderie of the group was obvious early on. When volunteers were on the banks to retrieve trash, there was discussion about the easiest way to move it. When canoes passed each other, they carried on conversations, some joked about the amount of trash a canoe had on board, and others called out about another dump they’d found.

Multiple people told me Project AWARE is like a big family reunion every year. Several people started volunteering when they were children, and they’ve returned even though they’re in college.

“It’s just like one big happy family—RAGBRAI on the water,” said Nick Gaeta, an 18-year veteran of AWARE. “You pick up where you leave off last year, and meet and greet new friends.”

There were a few gravel bars around the five-mile point and a lot of people used them to pull over, stretch their legs, swim, eat lunch, and socialize.

Everyone was welcoming and friendly, and they’re always eager to see new faces.

When Dietz and I passed other canoes, most called out greetings or asked if we wanted to take some trash with us. We took one group up on the offer, and added a rusty, folded car hood to rest between us in the middle.

It takes a lot of careful maneuvering to keep the canoes still enough to add the trash and then to balance the weight in the canoe, all while also being careful not to get cut or to fall. A lot of times, people break down big items so they’ll fit better.

Luckily, there are first aid kits and training for people in the case of injuries. In fact, at least one of the volunteers is an EMT and has in previous years taught wound care first aid.

Another risk is tipping the canoe.

Dietz said there were five-to-eight capsizes on Tuesday, mostly because the river is full of branches and big sections of trees that have fallen in the water. The river is also high this year, and muddy, which makes it harder to see obstacles.

Later, we almost saw a few people tip over when currents pulled their canoes, full of big pieces of trash, close to clusters of branches sticking out of the water.

But, Dietz said, everyone is always quick to help those who capsize, and the people on board know how to keep out of danger. Every year, Project AWARE has a mixture of experienced paddlers and people who are new to the hobby.

With the partnership system, rules about life jackets, and some basic instruction on the first day, Dietz said they avoid serious danger and the experienced paddlers are always on hand to help or offer advice for the newbies.

“My favorite part of participating in Project AWARE has been the teamwork and how everybody pulls together,” said Heidi Hopper, who’s done AWARE for six years. “When somebody flipped their canoe, everybody came together to help the kids who had flipped it get the water out and catch their stuff and help make sure they got back in the canoe before going onwards.”

She said it’s also fun to switch up who you paddle with day-to-day. Hopper started the week with her husband and then switched to paddle with a friend.

Dietz told me they hadn’t found much trash before Wednesday, but on Wednesday, volunteers stumbled across what appeared to be farm dump sites. Dietz said those are pretty typical to find and some they come across can be extensive.

Usually they’re full of what volunteers call “legacy trash,” which means it’s from a different time, not newly dumped. That’s what makes the amount of trash less discouraging for a lot of the volunteers.

“I’m not seeing a lot of brand-new beer cans or anything, or plastic bags,” said James Weeks, a 14-year AWARE volunteer. “We used to see little campfires on islands like this, and beer cans, and we’re not seeing that anymore. People are picking up their messes.”

People also show off what they’ve pulled. Dietz said the first people to find tires generally prop them up in their canoes early on. Others make a show of balancing large pieces, or of tying them to the canoe to float behind them.

Dietz and I did it too. Attached to one of the branches in the water was something everyone thought was a shoe. We investigated and pulled out a duck instead—a decoy—tied or caught on one of the branches. Sitting at the front of the canoe, I was the one who unclipped the duck and then Dietz and I pulled on the rope until it slipped off the branch.

Then Dietz tied it to the back of the canoe to float behind us. 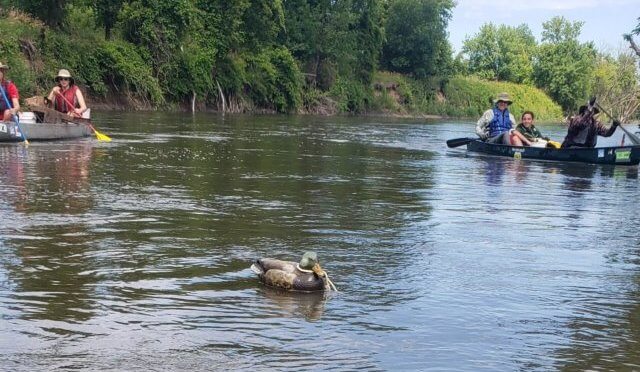 Wednesday was one of the shorter float days, and about three and a half hours after getting on the river we got to the end point outside of Emmetsburg. There, event staff helped pull canoes to the raft and carry trash up the hill to be sorted.

Then, everyone boarded a shuttle to the campsite in Harrison Park in Emmetsburg. At the campsite, people set up their tents and other supplies, took off their shoes to dry, waited for a different shuttle to the showers at Emmetsburg High School, and prepared for end-of-the-day eating and activities.

At camp, people have embraced reusable dishes rather than Styrofoam and refillable water bottles rather than plastic. It took them three days to fill one compost bucket.

A skills activity was set up with prizes for the team who could finish all the skills—such as knot tying and rescue rope throwing—the fastest.

For people like me who had parked cars at the old site, we boarded a shuttle to take us from Emmetsburg back to Wolden County Park. I then drove back to Emmetsburg, where a food truck—from La Calle—had also been set up.

There, I caught up with Jim Urban who was volunteering with his granddaughter, Bailey. He was leaning back in his bright orange lawn chair, next to the entrance of his tent. They’ve been doing AWARE for 14 years and he said Bailey started when she was eight years old.

“I’d rather be doing this than anything else,” he said.

He and Bailey usually participate for the full week of AWARE and on Wednesday Urban said they’d collected about 25-pounds-worth of heavy metal in the form of fence posts and railroad spikes.

Urban said the thing that keeps him coming back is seeing the amount of good work they do every year, and the way hundreds of people come together to make it happen—wading into the rivers, climbing river banks, and making sure Iowa waterways are at least a little better than they were before. Anyone who’s interested is welcome to join.

“We get a lot of new people but they don’t all come back,” he said. “Anyone out there who’s interested in conservation or litter, they should come out and observe at least.”