Riverside’s designation as the future birthplace of James T. Kirk is pretty well known to Iowans and Trekkies/Trekkers, but how did the southeast Iowa community gain the designation of being the origin point to arguably the most famous “Star Trek” captain?

In an incredibly ordinary fashion, it began with a city council meeting.

But first, a little background.

So to summarize, a fictional future spaceman—played by a Canadian actor—will be born in Iowa and an Iowa town capitalized on that connection.

Anyway, back to that Riverside City Council meeting that changed the future of the town.

Former Riverside Councilmember—and Trek fan—Steve Miller made a motion during a March 1985 meeting: What if they changed the theme for the city’s annual River Festival, held the last weekend of June, to Trekfest and they also claimed to be the birthplace of Captain Kirk?

Miller has retold the story of what inspired him to make the motion dozens of times over the years, including in a June 2021 interview with metro Des Moines radio station Nash FM 97.3.

“I had read the book ‘The Making of Star Trek,’ which had a biography of Captain Kirk in it,” he said. “It was written by Gene Rodenberry, who produced the show and had directed the show.”

The book noted Kirk was born in a “small town in the state of Iowa” so Miller thought Riverside should claim the designation.

Here’s how he described the outcome of that meeting in a February 1989 issue of Starlog magazine:

“Although they were taken by surprise, the resolution passed unanimously. Shortly after the meeting, I was talking to a friend who’s a reporter in Cedar Rapids, and he decided to run a front-page story on the idea,” Miller said.

“It was picked up by the wire services and The New York Times and was even broadcast over the BBC in England. The mayor had to take a week’s vacation from his regular job to be at city hall to answer all the calls about it. At that point, we knew we had made the right decision.”

That famous front-page article ran in the March 27, 1985, issue of the Cedar Rapids Gazette.

Miller told the paper the motion almost died due to lack of a second.

“Finally another council member said ‘Why not?’ so we discussed it for about five minutes and voted,” Miller told the paper. “I don’t think Roddenberry will get mad and I told the council if there’s any litigation, I’ll pay the expenses.”

So how did Roddenberry react to the town’s declaration?

According to Miller, Roddenberry was cool with it and called it a “very enterprising idea.” The creator also provided a quote to the Gazette in a 1985 follow-up story where he told the paper, “As far as I’m concerned, the first volunteer has it.”

Although Miller said his community was initially shocked by the global attention it received, the town grew to welcome it. Riverside’s slogan was changed from “Where the Best Begins” to “Where the Trek Begins.” The city’s logo even features a model of the USS Enterp—excuse me—the USS Riverside flying.

The volunteer-run Voyage Home-Riverside History Museum is dedicated to telling the city’s history and that of its future local legend and it opened in 2008. And perhaps the coup de grace, a bronze Captain Kirk statue was unveiled in July 2018. Fundraising for that statue dates back to 1985 when members of the Riverside Area Community Club began selling $3 vials of “Kirk dirt.” 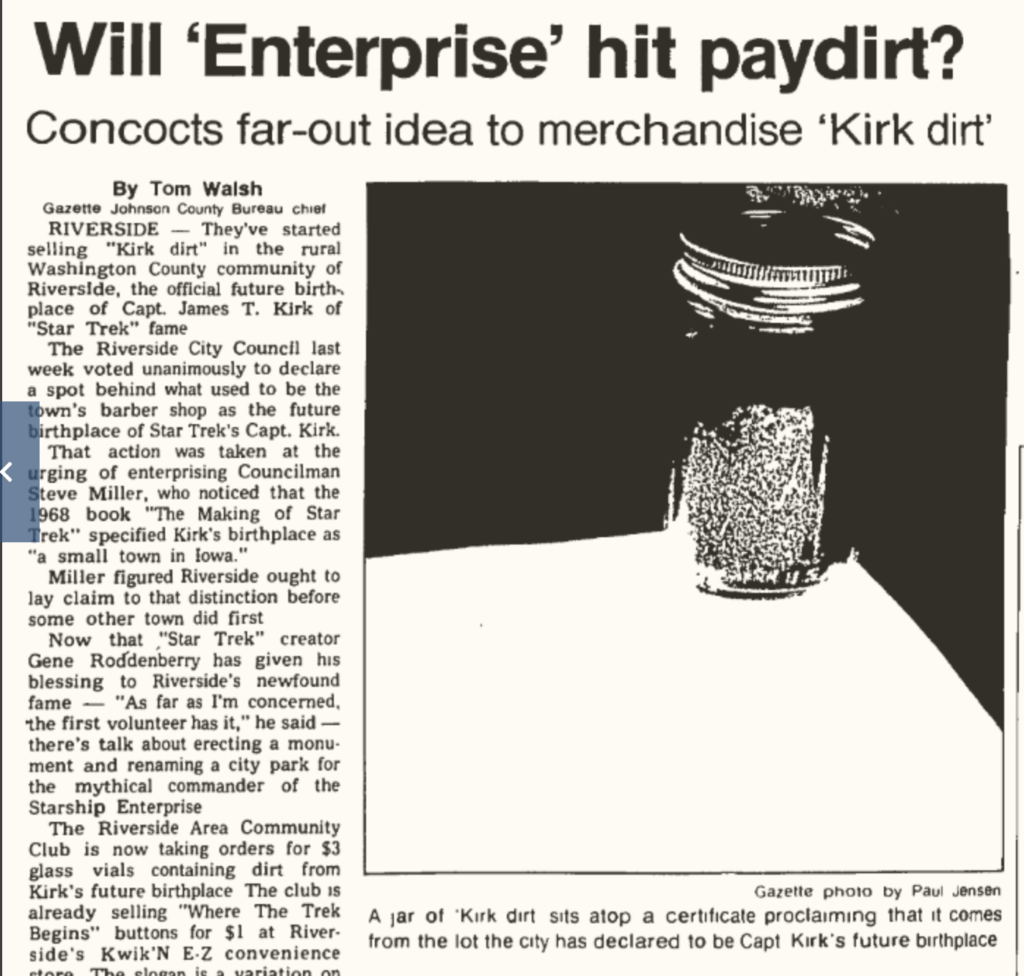 Riverside also has a parade as part of its annual Trekfest—year 37 kicks off on Friday, June 24—and Miller says that parade helped the town clear legal hassles with Paramount over its use of the “Star Trek” brand.

“They were sending me certified letters offering to sue me into poverty,” Miller told Nash FM.

According to Miller, the issue was finally settled thanks to another newspaper. A photo of a man dressed as Spock—arguably the second-most famous “Star Trek” character—with his dog who was also rocking a pair of Spock ears—ran on page two of an issue of the Los Angeles Times.

Miller said he was speaking to a Paramount attorney, who was in California where the studio is based, and asked her if she had seen that day’s issue of the Times?

“She said, ‘No, it’s on my desk.’ I said, ‘Well, open it up to page two.’ She opens it up and immediately starts laughing,” Miller told Nash FM. “And I said, ‘We’re giving you guys millions of dollars of free publicity every year and we have no intention of doing anything that would harm the image of ‘Star Trek’ and she said ‘OK, I’m done.’”

While the town escaped legal ramifications, the studio still wouldn’t acknowledge Riverside as being the home of Kirk until decades later. The town’s magic moment—well, depending on who you ask— came during the 2009 reboot of “Star Trek” featuring Chris Pine as Captain Kirk.

The 2009 movie features Riverside as the site of a spaceship yard and shows Kirk there, but the captain is shown to be born in space and raised in Iowa. This drew the ire of some Riverside residents, according to Radio Iowa.

“There’s a lot of nerdy physics phenomena that operate in this movie that were a little disconcerting anyway, but then when they stripped the birth of Captain Kirk away from our future, at least in one parallel universe, it muddies the waters,” then Riverside Area Community Club Vice President Tim Geerlings told Radio Iowa.

But, if it’s any solace, the reboot franchise takes place in an alternative timeline and the real Captain Kirk (Shatner) has been to Riverside. Shatner was there under the guise of making a movie—in actuality, it was a reality TV show—but Miller told Nash FM it was still great.

“He was accessible to everybody,” Miller said. “Every night at Murphy’s Restaurant and Bar, he would be in the backroom and anybody who wanted to could come in and talk to him and say, ‘Hi.’

“Celebrity status just went out the window, they just acted like normal folks when they were in Riverside.”

Other folks connected to the franchise have visited the community and even participated in Trekfest, which draws thousands of visitors to the town of a little more than 1,000 residents.

Miller also told Nash FM it is endearing how the community has embraced its Trek connection and the uniqueness it gives Riverside.

“It’s just a very, very fun thing,” he said. “How many places have the future birthplace of a person who’ll never exist? Riverside is the only one that comes to mind.”