As a Midwesterner, there’s something special about seeing places we know and have lived depicted in movies and TV shows.

A lot of times, those depictions are inaccurate as hell, but it’s still kind of cool that it happened. A perfect example of this is the fourth(!!!) episode of “The X-Files” in which FBI agents Fox Mulder and Dana Scully visit Iowa to find a missing girl.

So for this week’s Iowa Weird, I’m going to examine “Conduit.” This 1993 episode of “The X-Files” is the one where Mulder and Scully visit Sioux City on their way to visit Lake “Okobogee” as part of their investigation into a missing girl, Ruby—you might remember it as the one where the young boy writes down messages he gets through the TV.

Now, rather than giving a detailed recap of the entire episode, I’m just going to point out as many Iowa references as I can while also providing a correction or additional context when necessary. I’ll also elaborate on particular scenes if it helps explain the Iowa Connection.

You can find “The X-Files” streaming on Hulu, by the way. All of these images are photos I took of my TV screen and cropped.

The show opens at a campground that could pass for Okoboji if you’ve never been.

Also, I have no idea why the show decided to spell Okoboji like “Okobogee,” but, in most cases, I’m going to stick to the correct spelling because I don’t want to keep going back and forth since it comes up a lot.

This scene is also when Ruby goes missing.

3:08: Sioux City, Iowa, is mentioned for the first time. As a two-time Sioux City resident, this pleased me.

5:49: We get our first mention of Okoboji during a conversation between Mulder and Scully. Mulder was trying to convince Scully that they needed to investigate Ruby’s disappearance after her mother, Darlene, told a tabloid she thinks her daughter was abducted by aliens. Darlene believes this because 26 years before Rudy disappeared, she spotted a UFO while on a Girl Scout Trip to Okoboji.

7:08: My beloved Sioux City appears on screen, although it is very much not my beloved Sioux City—most of the shots were done in Vancouver, Canada. Mulder and Scully visit Darlene, who despite her previous UFO experience in Okoboji, decided to take her family camping in Okoboji? Ma’am, Yankton, South Dakota, is right there as an alternate option! 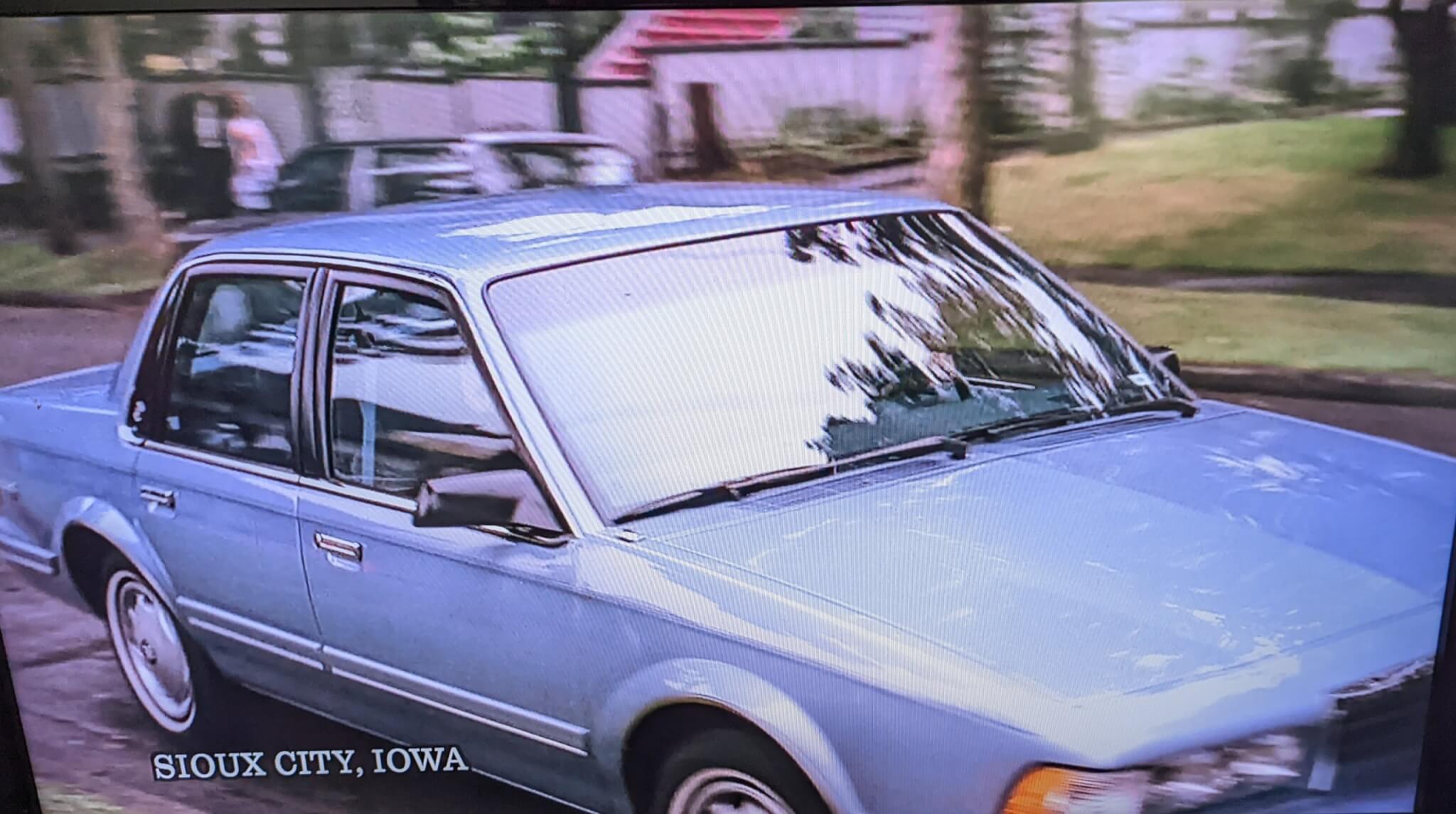 11:20: Darlene’s other child, Kevin, creepily tells Mulder “they are coming from there” and points to the TV while the FBI agent is questioning him about his binary code drawing.

In the next scene, Mulder and Scully visit the Pennsylvania Pub to investigate the missing girl’s sort-of boyfriend. The pub is a biker bar and appears to be in a 4th Street-like district. For my money, the most notable biker bar in Sioux City is the Ickey Nickel which also boasts an incredible patio area.

16:30: A Pennsylvania Pub bartender mentions Lake Okoboji and its connections to UFOs. 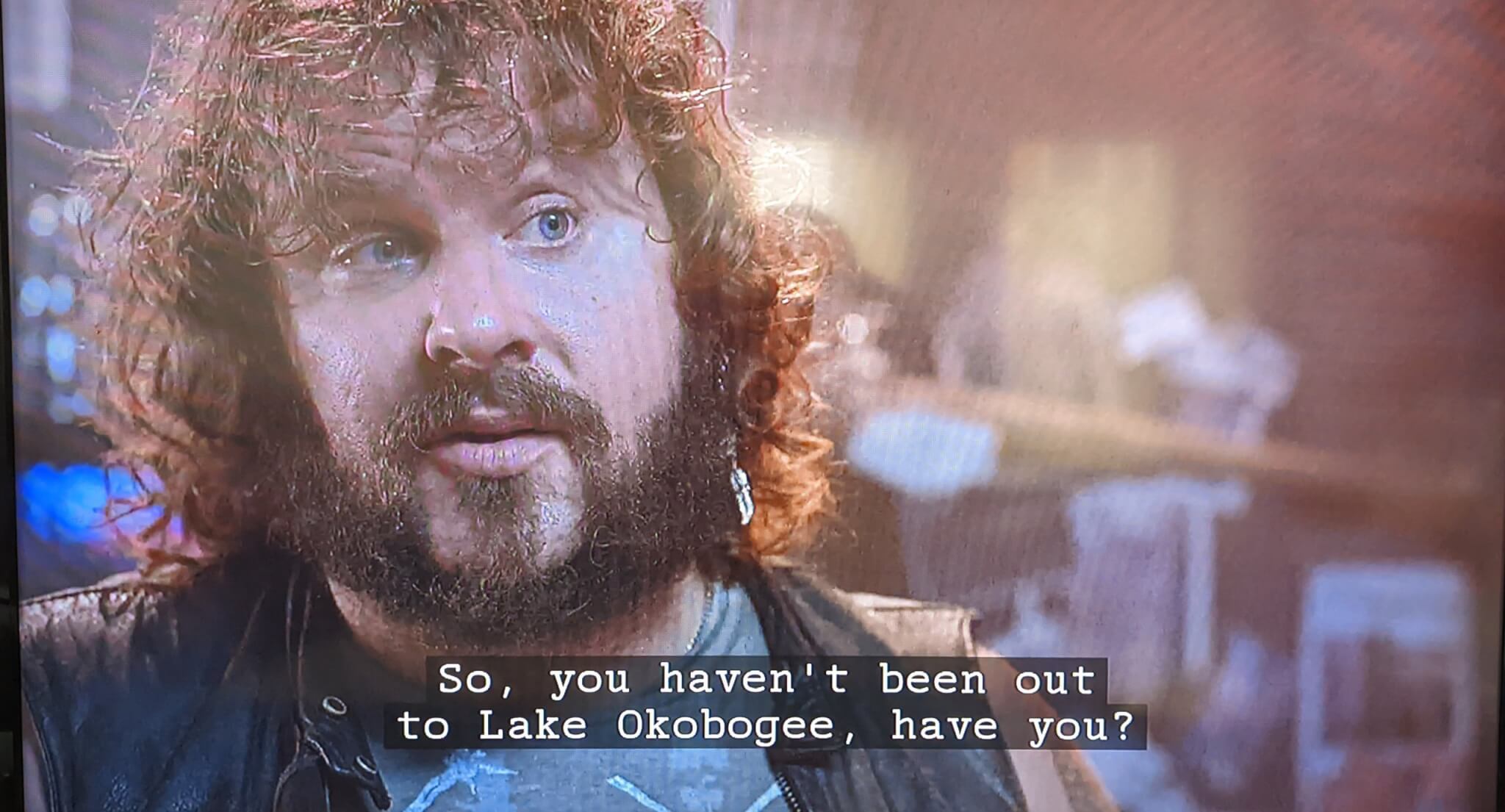 In the next scene, Mulder and Scully are staying at the Save Inn. There’s no such place in Sioux City (that I’m aware of) but there are plenty of cheap—and a few fancy hotels—in town. The National Security Agency (NSA) breaks into Mulder and Scully’s rooms because they are trying to figure out where Mulder got the binary code he faxed to a friend while at the Sioux City Sheriff’s Department.

We then cut to the NSA tearing up Creepy Kevin’s bedroom. They even tore his crayon drawings from the walls, which seems a little unnecessary. They are investigating him because the binary code he was writing out—that he said came from the TV—turned out to be the code for a defense satellite.

21:50: The Sioux City Regional FBI office appears on screen. Sioux City does have an FBI office, but it’s a field office rather than a regional office.

24:01: A highway sign for a downtown Sioux City exit appears. This scene features Mulder and Scully driving on some random back road when in reality, the primary entrance to downtown Sioux City is Interstate 29 which runs alongside the Missouri River. Listen, this wasn’t planned out well but at least the interstate project is done, a feat many (somewhat) jokingly thought would never be accomplished.

Also note the towering pine trees in the background, not exactly the backdrop as you head into Sioux City. 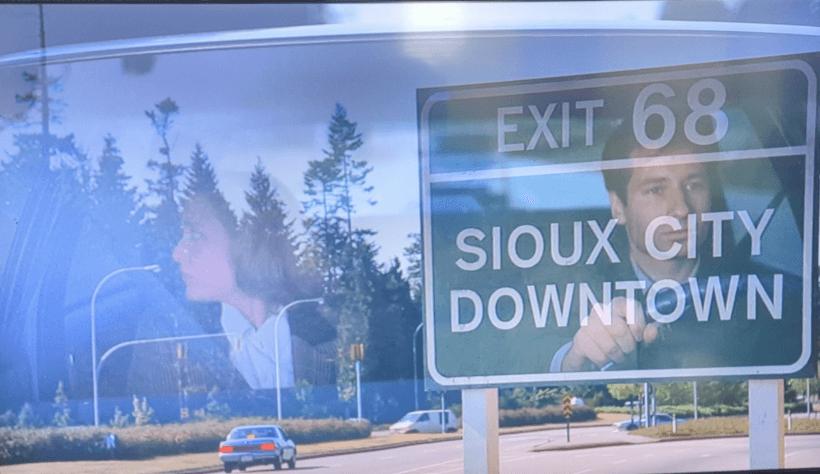 25:03: Mulder tells Scully they are going to Lake Okoboji. In reality, Sioux City and West Lake Okoboji—assuming this is the Iowa Great Lake meant to be “Lake Okobogee”—are separated by 110 miles and five counties if you take highways 60 and 9. Not making a joke here, those are the actual highways you take if you want the fastest route.

25:22: Mulder and Scully are at the campsite where Ruby was abducted.

You can see the famous mountains of Lake Okoboji in the background.

By the way, here’s what Okoboji actually looks like. 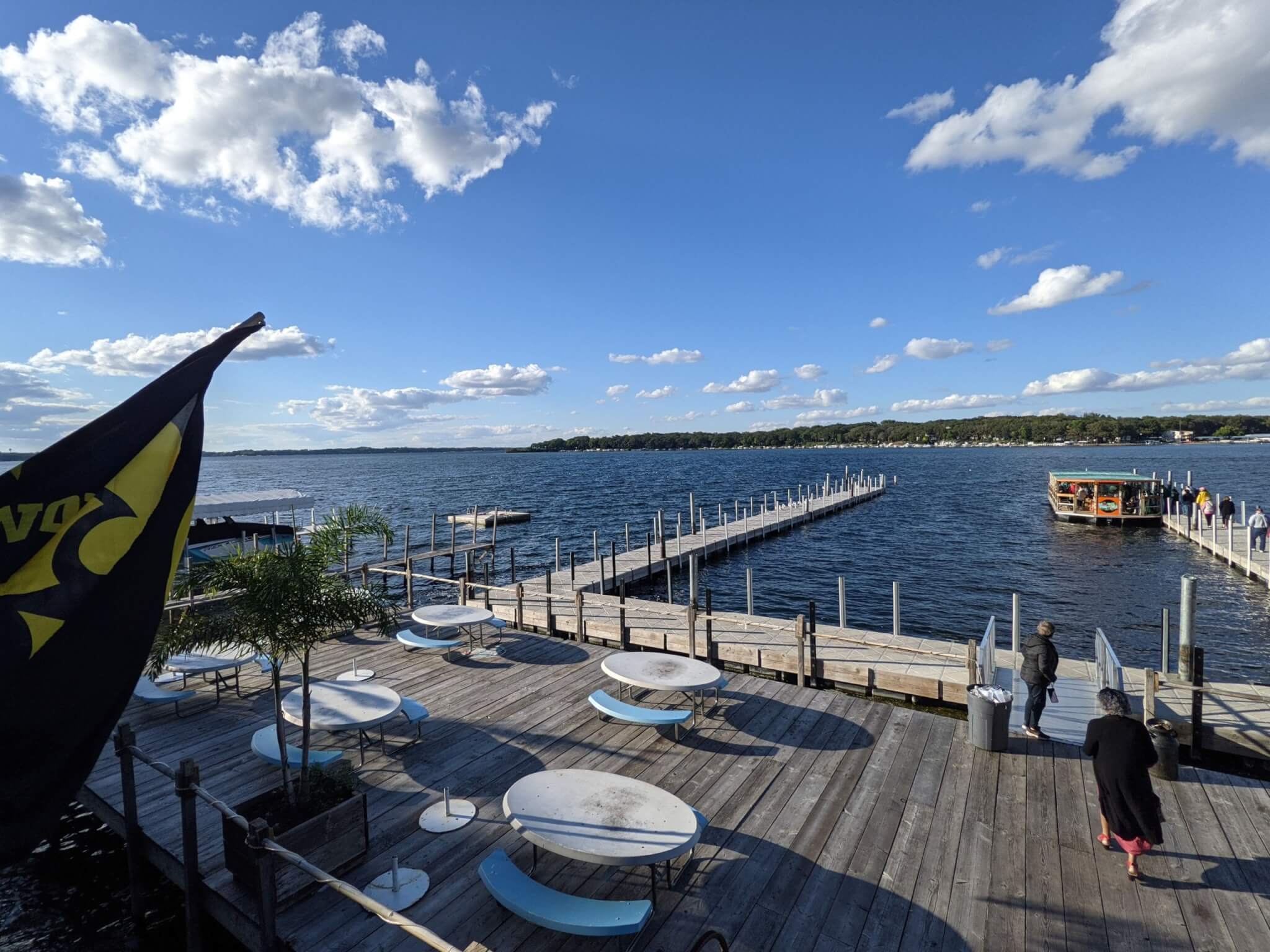 The lake used in the episode is Buntzen Lake, located just northeast of Vancouver.

This scene also features three white wolves. According to the Iowa Department of Natural Resources, the only wolves native to Iowa are two gray wolf species. Also, the last time I recall a wolf being near Okoboji, it didn’t work out so well for the wolf.

Turns out the wolves lead Mulder to a shallow grave that held Ruby’s kind-of boyfriend. His death was investigated by the Sioux City Sheriff’s Department, which doesn’t exist, but, if it did, it wouldn’t have jurisdiction at the lake since it’s located in Dickinson County.

32:17: We get a Sioux City and Des Moines reference back to back! Also, during this segment, they refer to Lake Okoboji as a national park. We don’t have any actual national parks here, but we have some pretty cool state parks and you can learn more about them via our Amie Takes a Hike Series!

We cut back to downtown Sioux City. Although the Sioux City Sheriff’s Department doesn’t exist, I will give the producers some credit since the outside of the fictional office kind of resembles the outside of the magnificent and historically significant Woodbury County Courthouse. 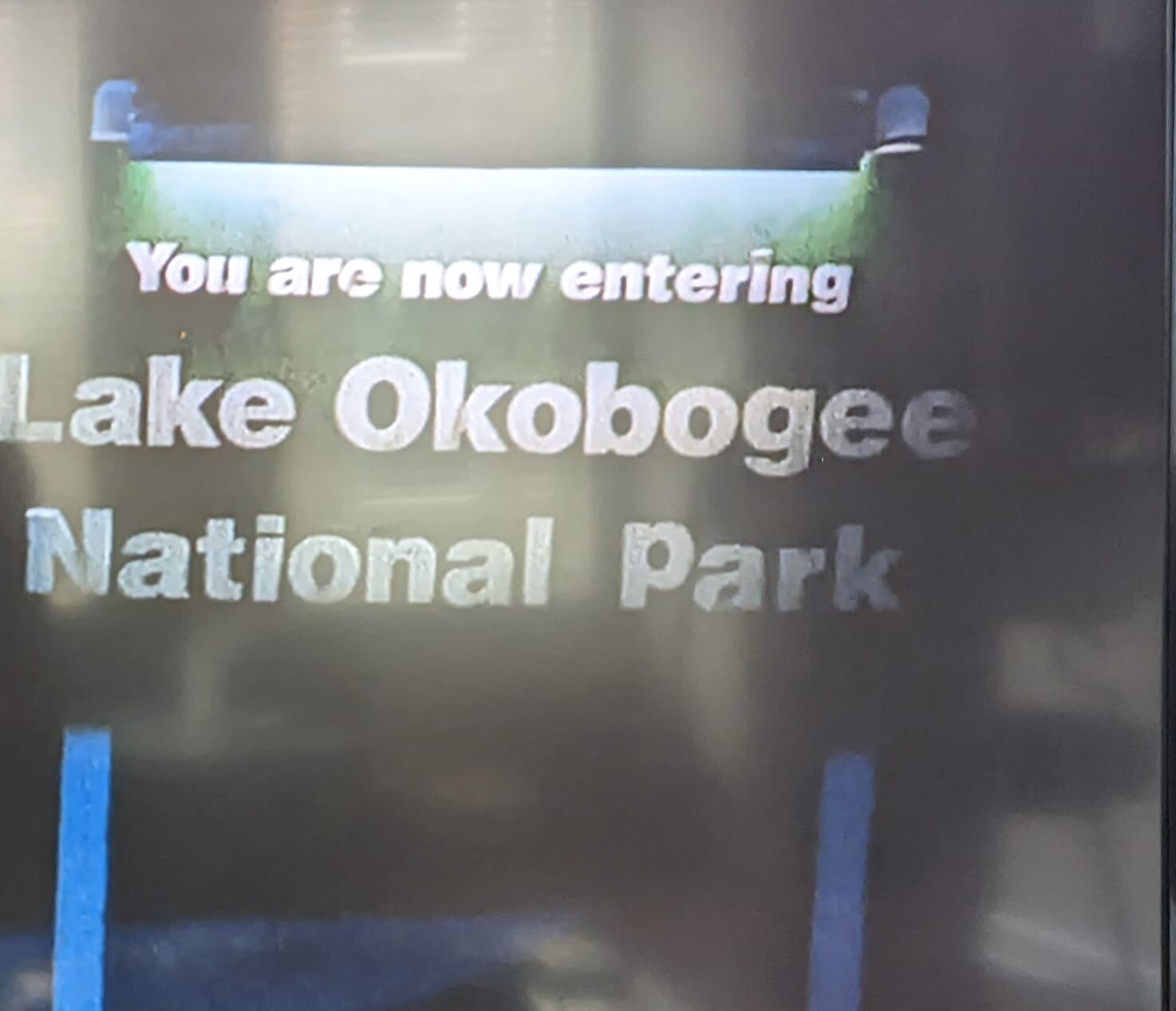 At the park, Mulder, Scully, Darlene, and Creepy Kevin find Ruby, but she’s unconscious. The next scene shows Ruby in a hospital, which I’m presuming is in Sioux City. If so, the big question is Mercy or UnityPoint? That rivalry is like the Red Sox vs. Yankees but for local health care.

With that, the Iowa references in “Conduit” come to a close. While I give the show zero stars for Iowa accuracy, I give it five stars for going all-in on this fictional version of Iowa.

Got a news tip? Email Ty Rushing at ty@iowastartingline.com

1 Comment on "Iowa Weird: That Time ‘The X-Files’ Did A Northwest Iowa Episode"