Emily Bruns had never met Abby Finkenauer before, but she had followed the US Senate candidate’s career closely.

“I have been a fan since she was in the Iowa House and then followed her in [Congress],” said Bruns, a social studies teacher at Mason City High School.

Bruns got her chance to meet Finkenauer when the former congresswoman stopped by Mason City Brewery for a campaign event on Sunday. Finkenauer, 33, is one of three Democrats—the others are former Admiral Mike Franken and Dr. Glenn Hurst—running in the June 7 primary in hopes of taking on US Sen. Chuck Grassley in the fall general election.

Although Bruns has been a fan of Finkenauer’s legislative career—which began in 2014 when she won a seat in the Iowa House at age 25—the school teacher was still undecided on which candidate to support in the primary.

“I was leaning toward Franken after I heard him speak, but I feel like—and I told Abby this—I feel like she’s me,” Bruns said. “We have a very similar background with blue-collar parents and living in rural Iowa, we are of similar age, similar values, and I think I want someone who represents what I believe in, [so] who better than Abby when she is kind of me.”

What Bruns sees in Finkenauer is also how the candidate presents herself on the trail. The Cedar Rapids resident and rural Dubuque County native is the youngest candidate and the only woman among the five Senate hopefuls, and Finkenauer doesn’t shy away from the contrast.

“In 2018, I became the youngest woman in history to flip a seat from red to blue and we took back the US House of Representatives,” was one of a few Finkenauer lines that drew applause from the brewery crowd.

Finkenauer highlighted how she tried to use her position in Congress to advocate for women, especially for overlooked subject areas.

“I don’t know if anybody here knows what endometriosis is, but it’s a condition that affects one in 10 women and I happen to have it,” Finkenauer said.

According to the Mayo Clinic, endometriosis is a “painful disorder in which tissue similar to the tissue that normally lines the inside of your uterus—the endometrium—grows outside your uterus.”

To her amazement, Finkenauer said endometriosis was among the lowest funded areas of research for the National Institute of Health and there was no congressional caucus dedicated to it.

“There’s a caucus for literally everything in Washington, DC—like for big cats, right—I mean for every condition and yet there was not for endometriosis,” she said.

Finkenauer shared her story during a pre-pandemic March 2020 House floor speech and went on to co-found the bipartisan House Endometriosis Caucus to raise awareness and increase research toward the cause.

Her Mason City stump speech also focused on the contrasts between her and Grassley, who started his legislative career in the Iowa House when Finkenauer’s former school secretary mother, Deb, was three years old.

“We have got to retire Chuck Grassley because 47 years in Washington, DC, is just too dang long for anybody, I don’t care who you are,” Finkenauer said.

Were she to win the primary and general election, Finkenauer has vowed to serve only two six-year terms before walking away from Washington.

“If you can’t get it done in 12 years, what are you even doing there and why,” Finkenauer said, another line that drew applause. Finkenauer took a few questions from the crowd including one on whether or not she would debate Grassley—“Oh, any chance I get. I cannot wait”—before leaving the brewery and Mason City.

After a short lunch break in nearby Clear Lake, Finkenauer’s last event of the day was a walking tour of downtown Britt with Mayor Ryan Arndorfer and City Administrator Elizabeth Ibarra. 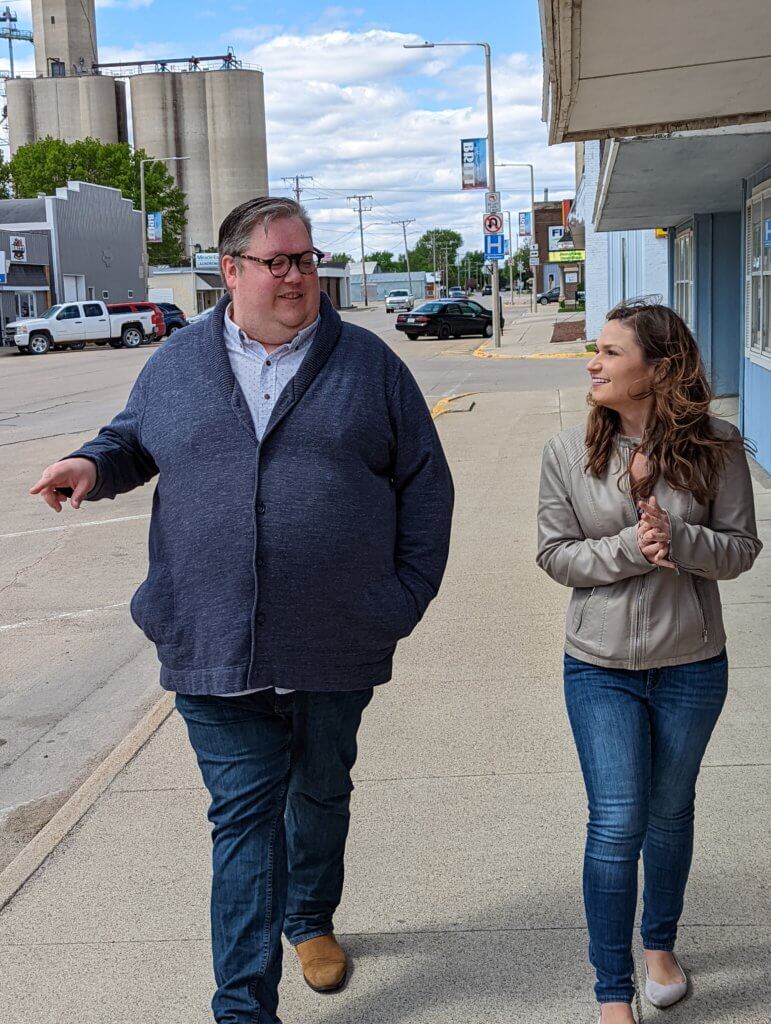 Britt has a population of a little more than 2,000 people and is famous for hosting the National Hobo Convention and being home to the National Hobo Museum, but what Arndorfer wanted to showcase were things he and others appreciated about their community.

With the notable exception of Dollar General, which moved to a new store closer to Highway 18, most of the storefronts in downtown Britt were filled. Britt Foods, the local grocery store, is owned by Arndorfer’s sister and brother-in-law, a common occurrence in the Hancock County community.

“That’s what I love, is that a lot of our businesses are family owned,” Arndorfer said. 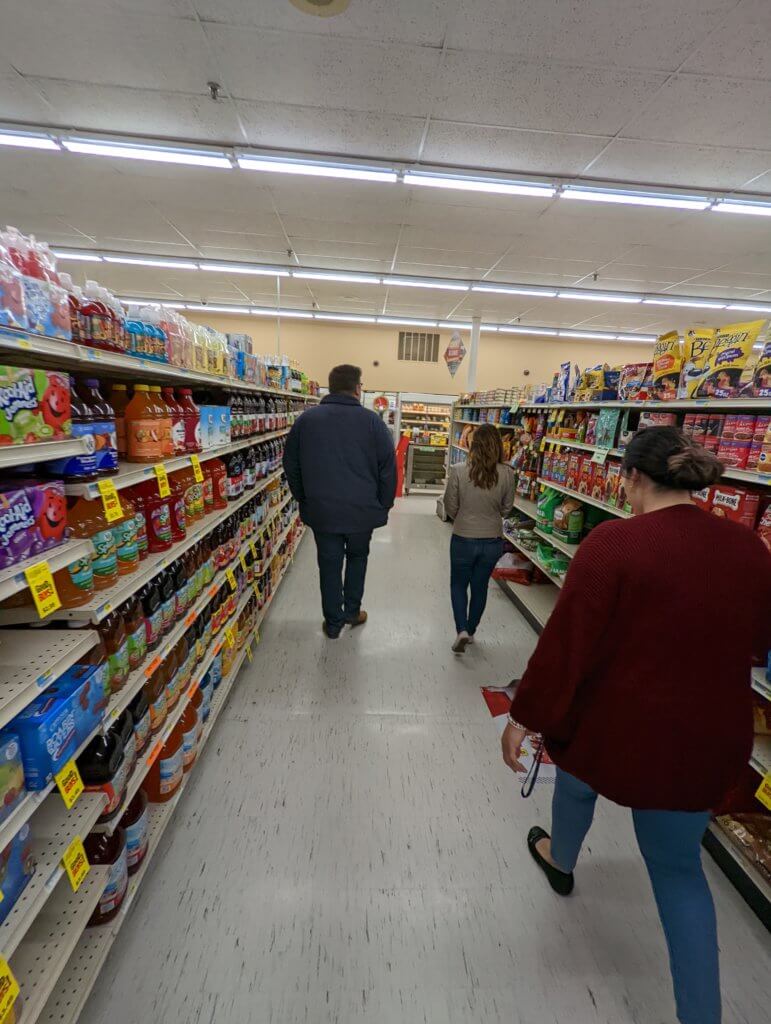 Finkenauer and Arndorfer also talked politics during the tour.

“I used to be a Republican,” Arndorfer confessed to Finkenauer.

While the mayoral office is nonpartisan, Arndorfer is a rural Democrat in a county where former President Donald Trump received 71.3% of the vote in the 2020 general election. The Britt native moved back to Iowa after 20 years in Chicago.

Some of the items the mayor and former congresswoman dived into included: 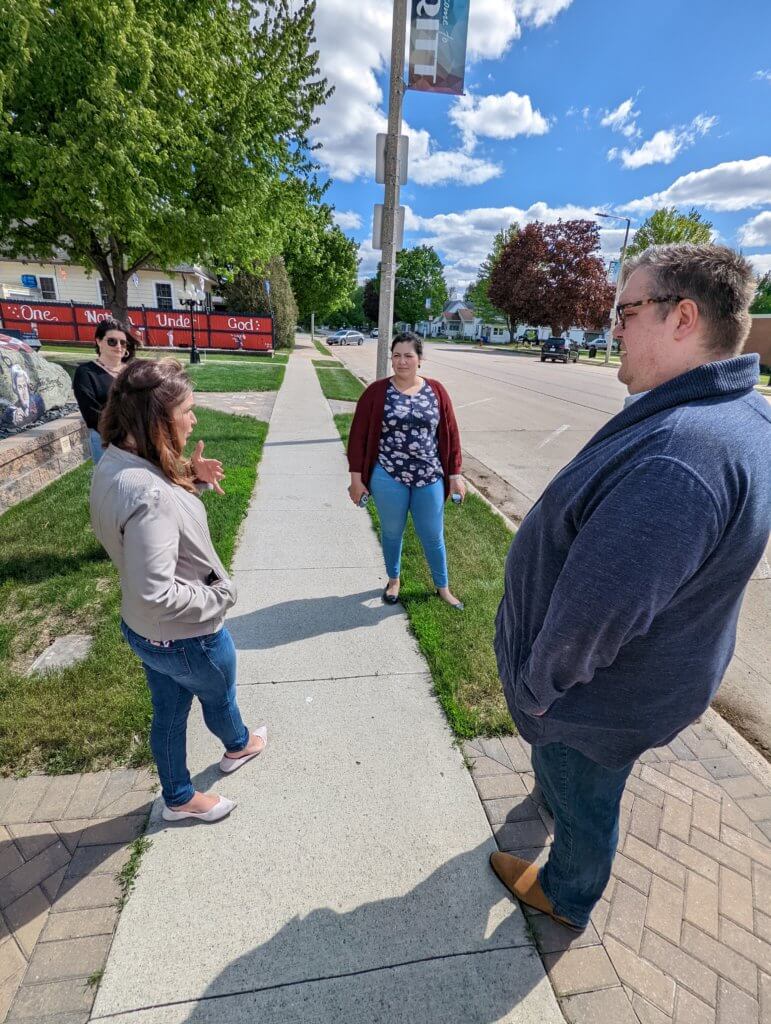 Another topic they discussed was infrastructure, which is why Arndorfer said he supports Finkenauer. Finkenauer served on the transportation and infrastructure committee in Congress and sponsored or cosponsored multiple bills related to the subject.

“We need someone like you there,” Arndorfer said. “One of the reasons I fell in love with you is because you talk about infrastructure. Any small-town mayor, that’s going to be the No. 1 issue they fight over.

“And the other thing is that you are not a 60-year-old white male. I think we need more people who look like the rest of us and I think, with millennials and the next generation being voting age now, we have the power to put in people who look [like] and represent us and I think you are a great start to that.”