I’m hiking every beautiful place I can think of around my home state, to showcase the beauty Iowa has to offer. Follow along here, or on Twitter using #AmieTakesAHike, to pass along your suggestions and see where I’m headed next.

They had me at “waterfall.”

Union Grove State Park, established in 1938 outside of Gladbrook in Tama County, is an easy jaunt down US Hwy. 63. It’s probably best known for the large Union Grove Lake, which the park was basically built around—a 110-acre beauty used for fishing, boating and swimming at the beach.

But tucked along its southeast trail, where the lake drains, is Union Grove Falls, situated right off of the dam. You barely need to get out of your car to get a glimpse, though you’re rewarded with the meditative serenity of the sound of falling water if you head across the bridge and through the tree-lined path to get a closer look.

I already wish there was a walking path around the entirety of the lake, like lots of other parks have. There’s local roads, which you can walk or cycle along next to the lake houses that ring the edge (the park’s boundaries, with a couple exceptions, end where the lakeshore meets the road). But that’s always dicey when your hike is competing with traffic, not to mention traffic disrupting your wildlife/lake viewing.

Instead, Union Grove has two separate hiking trails—one at the northwest corner, which doubles as a wildlife refuge, and one at the southeast, which has the waterfall and connects to the campground.

Neither one of them fully loop, something else that would be a cool addition and, from the trail map, looks at least possible. I like full loops so that I can end up right back where I parked, without backtracking.

Either way, both trails are less than 3 miles combined, so assuming your supposed waterproof hiking shoes don’t soak through while you’re getting bit by early-summer mosquitos (she said cynically), they’re both pretty easily tackled in an afternoon.

The sights and sounds

Woods-and-water is my favorite hiking combination, and Union Grove has ’em both.

The Canada geese pairs had goslings in tow on our mid-May hike, and it was fun watching the fuzz balls stutter-step after their parents and swim in a neat line behind them once they hit the lake on the South Trail.

On the North Trail, an official “wildlife refuge,” a white-tailed deer showed itself among the dense woods after getting spooked by us, a thrill for me to spot during a hike. (The Iowa Department of Natural Resources say turkeys also populate the park too.)

And at the South Trail’s waterfall, the sounds of rushing water, which always puts me in a contemplative mood, pleasantly falls several feet to the rocks below.

The trails seem well taken care of, switching between wood chips, mowed grass, rocks and dirt tracks depending on where you were. There was some unfortunate vandalism near the dam when we went that I hope the DNR cleans up soon. 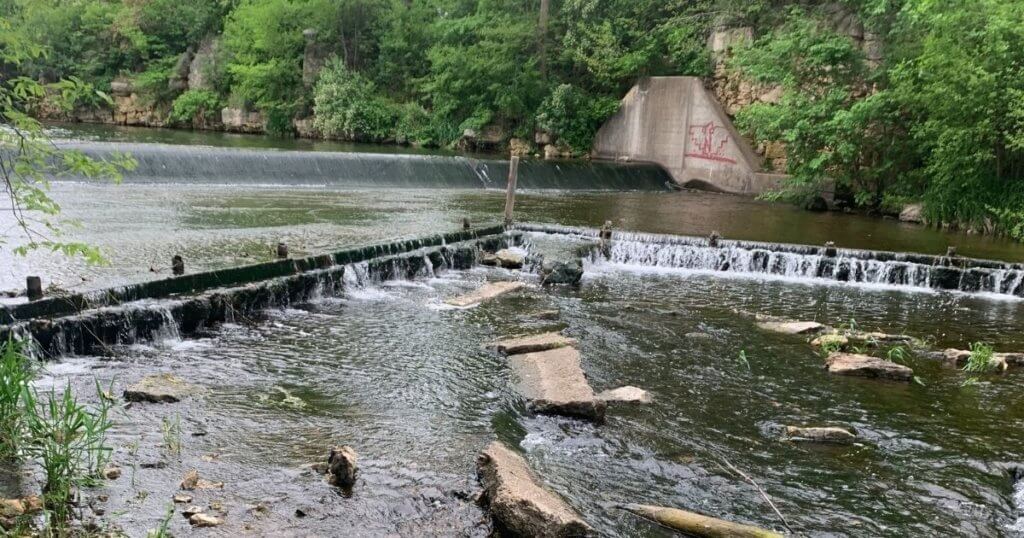 Obviously, I have plenty of free advice for the DNR on how to improve Union Grove hiking trails—figuring out how to loop their North and South trails, as well as how to connect both of them and perhaps even add a hiking trail around the entire lake that somehow doesn’t involve the road.

But even if those don’t happen for a while, Union Grove is still worth hiking. The variety of terrain—from re-established prairie to stands of pine trees to rocky outcroppings—provides cover for a variety of songbirds, waterfowl and wildlife. And official and less-than-official trails off of the main hikes, with plenty of elevation changes across the area’s rolling hills, give adventurous hikers something to explore.

2 Comments on "Amie Takes a Hike: Union Grove’s Lake, Waterfall and Diverse Flora Pull You In"