Members of the Waukee community spoke up at Monday night’s school board meeting over a racist presentation given by students which used racist language to describe immigrants.

Many of the speakers were Latino parents in the district and wanted to know how the school planned to address and remedy the situation—both with the teacher who led the class where the presentation happened and the student who gave it.

“I know we’re a minority here but we’re here and we’re not going anywhere. We’re here to stay and we bring stuff to this community, or else we would have already left, and we like it here,” said Nora Morales, a parent. “So that’s why we’re here, but we also need your help in order to keep our kids safe and to stop this hate from going on in our school district.”

On Thursday, a student at Timberline School in Waukee, which teaches grades eight and nine, gave a presentation about illegal immigration which parroted racist talking points.

Some examples include a slide titled: “Why Illegals Should go home,” with one point claiming, “There is a huge influx of mexican rapists.” The presentation ended with, “In the end, Mexicans are bad.” 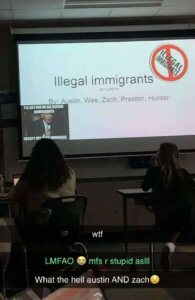 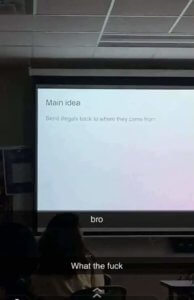 There were also memes of former President Donald Trump and other conspiracy theories about immigration included in the presentation.

The school announced an investigation into the “entirety of the situation” in a statement. The statement also said the language was inappropriate for school and concluded with, “To be clear, Timberline and Waukee Community School District will not tolerate hate speech or threatening messages in our buildings or classrooms.”

A commissioner from the Iowa Commission for Latino Affairs, Caleb Knutson, offered his help.

“We would like to see clear action done, clear policies put in place because if this happens once it can happen again,” he said.

Knutson said he understands the position of being an elected official, but that the board needs to take a stand against this incident.

Speakers also wanted to know why the presentation wasn’t stopped when it was obvious in the first few slides where it was headed.

One retired teacher spoke to the obligations teachers have for guiding students and overseeing their projects, or interrupting if those projects veer negative and make others uncomfortable.

“How did the teacher get away with doing this? How does any of that fit in with the standards?” she asked. “When I had students doing projects, I wanted to know ‘what are you going to do, tell me what you’re doing, how are you going to do it, what are the materials you’re going to use?’ And I needed to go along with them each step of the way.”

Another parent pointed out that it’s possible to have a real discussion about immigration using statistics, current laws and other information that can be verified.

“Students would have an opportunity to learn about our immigration system without hurting and alienating an entire ethnic group in our community,” she said.

The issue goes beyond the presentation, though, according to parents. They shared stories of their children hearing similar language and other slurs before the presentation happened.

Fabiola Schirrmeister, a parent in the district, said she knows there were two students with parents from Mexico in the classroom during the presentation.

“What was the message that was sent to the kids when the presentation was over? Nobody said anything,” she said. “We’re just asking for the same things that you guys asked for your kids when they have a problem, when they feel discriminated. We’re not asking for anything else.”