In recent days, Iowa Republican Reps. Ashley Hinson and Mariannette Miller-Meeks have had to defend themselves against fellow conservatives who have criticized their support for a bill to improve the national immunization database.

Critiques have come from conservative circles and actors such as Fox News host Laura Ingraham, Breitbart, and the politicians’ own voters over their support for HR 550 or the Immunization Infrastructure Modernization Act of 2021.

Broadly, some conservatives argue this database would be used to track people who haven’t been vaccinated for COVID or that their personal health information could be leaked.

“This would help fund a federal vaccination database—now, does that level of intrusion sound like something Republicans should be supporting?” Laura Ingraham questioned on the Dec. 3 episode of her show.

The Fox News host then suggested that the information in the database could get “into the wrong hands or the wrong party” and that unvaccinated Americans could face surveillance, punishment and isolation.

“This is so shocking that 80 Republicans voted for this. Sounds like there’s a lot of primary challenges going to be underway just on that topic,” Ingraham added.

The next day, Miller-Meeks tweeted an explainer debunking the idea that the bill creates a tracking system for people who haven’t been vaccinated or gives access to health-care records.

She wrote, “Recently, there’s been some misleading information on a piece of legislation that passed the House earlier this week.”

Recently there has been some misleading information on a piece of legislation that passed the House earlier this week, H.R. 550, the Immunization Infrastructure Modernization Act. pic.twitter.com/4XSHbRi7Xf

The Immunization Information System has been around since the 1990s, according to the Centers for Disease Control and Prevention.

On Facebook, Hinson waged the same fight when some commenters accused her of promoting spying on Americans and paving the way for vaccine passports. Her page posted the same response to several different comments.

She or her staff wrote: “This legislation, HR 550, does not create a federal vaccine database—or a pathway to create one—and does not require individuals to report or share their COVID-19 vaccine status. Iowa, like many states, has long used immunization information systems to help health care providers increase access to care for rural areas, and has been used specifically to ensure children have access to vaccines for measles and mumps. These systems are completely confidential. H.R. 550 would provide the option for states to modernize their existing systems, including Iowa’s, to ensure information is kept secure and private – the goal is not to collect data, but to ensure that existing data is entirely cybersecure and not tied to an individual patient.” 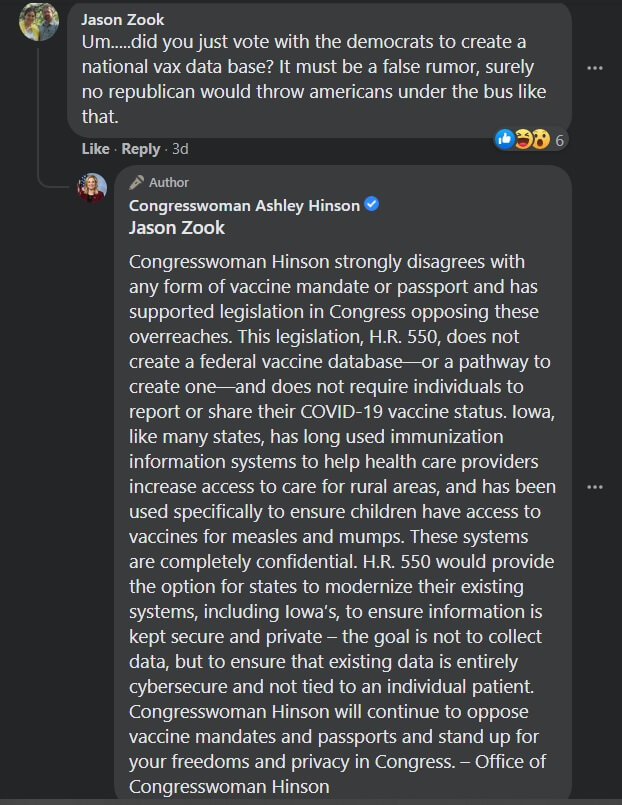 It requires the US Department of Health and Human Services to improve data sharing between states and the federal government, and the ability for states to secure and use that data for their citizens. The main point is to have an accurate, standardized record of vaccine distribution.