A nearly year-long debate over diversity in the Ames public schools came to a head yesterday in the school board election, and the three candidates who championed inclusion were victorious. 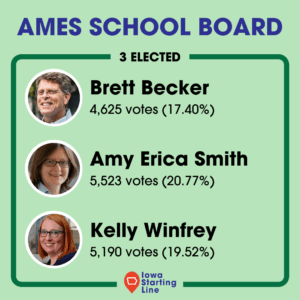 The fight over diversity started in February when the Ames School District came under fire for efforts to promote a Black Lives Matter at Schools Week.

Since then, conservatives have targeted Ames schools and how they and other schools were teaching students about race and gender diversity.

Conservative backlash to Ames’ week of instruction even made it all the way to the Iowa House Government Oversight Committee in March, where Republican lawmakers criticized school officials for efforts to promote what they saw as “divisive” topics.

The state later passed legislation to ban certain topics from being taught in schools, such as the existence of systemic racism or systemic sexism.

Rolf Duvick, Tom Purl, and Kira Weinstein ran on opposition to mask mandates and diversity efforts. The group was aided by backing from the Ames Deserves Better political action committee, which spent nearly $17,000 on the race and was formed in part to oppose Ames schools’ Black Lives Matter week.

Duvick answered an Ames Tribune candidate questionnaire about promoting diversity by saying, “The question of ‘promote . . . efforts’ makes me wonder why we would spend time publicizing our efforts to external audiences instead of focusing on building up our own students, teachers and faculty. Internally, I wonder why we spend time pushing kids into different groups rather than recognizing each as individuals with their own unique set of skills and challenges.”

At an October candidate forum specifically about diversity and inclusion, Wernstein and Purl were no-shows and Duvick left early. The three candidates who won—Smith, Winfrey, and Becker—attended.

They all emphasized the importance of including and listening to a wide spectrum of perspectives from different backgrounds in both the questionnaire and at the forum.

The Ames School District is also under targeted accreditation review by the Iowa Department of Education surrounding materials used in the February Black Lives Matter at Schools Week.

The district’s website describes Black Lives Matter at Schools Week as, “The Week of Action is a time set aside to affirm all Black identities by centering Black voices, empowering students, and teaching about Black experiences beyond slavery.”

It’s part of a years-long effort to improve inclusion and tackle disparity in the schools by affirming Black students’ identities and expanding students’ perspectives on Black history and life.

Amidst the criticism, Ames School District has received awards and praise for Black Lives Matter at Schools Week. The three candidates who explicitly supported the initiative continuing won the seats on the school board.