For the first time in years, the mayor’s race in Waterloo is a competitive affair, as well as a particularly contentious one.

Hart is campaigning on economic development, safety, community empowerment, and helping create a future vision for Waterloo. Klein, who announced her candidacy in June, has positioned herself as a people-first, hyper-pro law enforcement candidate who’s fiscally responsible. Mays joined the race in September and told the Waterloo Courier she would reveal her plans for office after she was elected because she didn’t want Hart to steal them.

Hart is the first Black mayor in Waterloo history, a significant milestone in a community that has the highest per capita Black population in Iowa. Hart ran unopposed in 2017 and 2019. Before he became mayor, he served on the city council for several terms.

Klein, who is white, is a two-term member of the Waterloo City Council. She also served six years on the Cedar Valley Catholic School Board.

Mays, who is Black, has no political experience.

Wait, why does the race of the candidates matter?
Well, for months, a political action committee (PAC) called Cedar Valley Backs the Blue has been dog-whistling Hart, including claiming he’s turned Waterloo into another Chicago, a city often used as a boogeyman in conservative circles. Hart and his supporters have called out the racist tone in the messaging, which the PAC rebuffed. Cedar Valley Backs the Blue endorsed Klein in the mayoral race but also has embraced Mays for some reason or another.

What is Cedar Valley Backs the Blue?
Cedar Valley Backs the Blue is a pro-law enforcement PAC that, on paper, was started in May by two former members of the Waterloo Police Department: Lynn Moller and Rhonda Weber, but no other members have been publicly identified. The PAC has erected anti-Hart billboards across Waterloo, sent out mailers, and has an extremely active Facebook page, which is where a lot of attacks originate. The PAC also directly opposes Joel Fitzgerald, the city’s first Black police chief, who told the Associated Press he thinks the attacks are racially motivated. Cedar Valley Backs the Blue says it is not affiliated with any political party and all of its funding is local; however, its finances won’t be available for review until Thursday.

Why does this group dislike Hart so much?
Last year, the Waterloo City Council—including Klein—unanimously voted to create a Waterloo Police Rebranding Committee with the intent to replace the griffin logo from the police department. For years, residents—primarily Black residents—noted it closely resembled the Ku Klux Klan’s grand dragon logo. Cedar Valley Backs the Blue says this decision cratered morale in the police department and has led to mass resignations and puts the blame on Fitzgerald and Hart, although the mayor did not vote on the measure or propose the change. The spark to finally take action on the griffin came after six other Black community leaders—including gubernatorial candidate and Waterloo resident Ras Smith—made a public push for it alongside overall police reform.

So this all started over a logo?
It started with the logo, but Cedar Valley Backs the Blue has gone on an all-out assault on Hart, including labeling him as anti-police.

Is Hart anti-police?
No. In fact, the Waterloo police budget has grown under Hart. The department’s budget was $15,888,813 in the 2019-20 fiscal year, an almost $2 million increase from the 2016-17 fiscal year, which was Hart’s first full fiscal year as mayor. Additionally, the department has maintained about 130 full-time equivalent employees during Hart’s tenure, which is about where it’s been historically since 2007, according to the city’s annual reports.

What else don’t they like about him?
Hart is a part-owner of a local ice cream shop, which they often cite in their criticism. He’s not the first mayor in Waterloo to also have a business venture. Hart’s direct predecessor, Buck Clark, was the owner of Jameson’s Public House, a downtown Irish pub. John Rooff, who was Waterloo’s mayor from 2003-2010, is the owner of Rooff Contracting & Manufacturing and Black Hawk Contracting & Development. Rooff maintained his ownership stake while also serving as mayor, while Clark sold Jameson’s before taking office. However, Clark does still list himself as the owner on his Linkedin page. 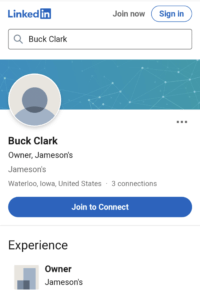 Anything else?
Plenty! But one item particularly that seems to grind the gears of the Back the Blue folks is that Hart likes to have fun.

What?
Yes. Last year for My Waterloo Days, an annual festival organized by volunteers to showcase and celebrate the city’s cultural and recreational opportunities, a Waterloo Celebrity Lipsync Battle was held virtually and Hart participated. It was conducted virtually as a COVID mitigation measure. Contestants sent in their best lipsync videos and people voted on them.

Backs the Blue is mad the mayor participated in a local lipsync battle?

Apparently. A music video was filmed of Hart lipsyncing to Montell Jordan’s “This Is How We Do It” in his office. Back the Blue said it “disgraces the mayor’s office,” took offense to the lyrics, and has run three sponsored Facebook ads criticizing the video, which has racked up a little more than 7,500 YouTube views. Meanwhile, more than 25,000 people voted in the contest. It should also be noted that “This Is How We Do It” is a tame enough song it is often featured in dozens of national commercials including one with Shaq.

So to sum it up, Mayor Hart supports his community, likes ice cream, the police, and Montell Jordan?

So why th does PAC seem to despise him so much?

That’s a great question. Maybe too much chocolate in the ice cream shop or perhaps city hall?