Where tragedy and chaos combine, hauntings often follow. At least, that’s what legends say. And Iowa has its fair share.

We’re all aware of the most famous haunted place in Iowa—the Villisca Axe Murder House. But we wanted to take a look at other sites that might pique your interest and be a good destination for a fall road trip. Each place has a story to dig into that offered a bit more suspense than being the location of gruesome murders. Some might even be new to you.

This inn, built in 1846, has several rumored ghosts. The owners of the inn and multiple visitors report hearing footsteps, people talking, music playing and doors opening and closing.

Some specific ghosts include a young boy who appears on a landing and tugs on the clothes of passersby, a man named Knapp who was allegedly murdered in Room Seven, an old woman in several rooms and a disembodied head in Room Eight. All are reportedly harmless.

The inn was an active stop on the Underground Railroad and was used as a holding hospital for wounded soldiers in the Civil War before they were transferred. Briefly, it was also used as a sanitarium for tuberculosis patients. With that kind of history, it’s no wonder people report so much activity—up to 100 spirits at any time.

The statue of the angel, pointed toward the street, stands to the side of the broader Fairview Cemetery in Council Bluffs.

Rumors are that the angel’s eyes track visitors and she flies around the cemetery at night. If a visitor looks into her eyes on the anniversary of Ruth Dodge’s death, legend says, they’ll die an untimely death. 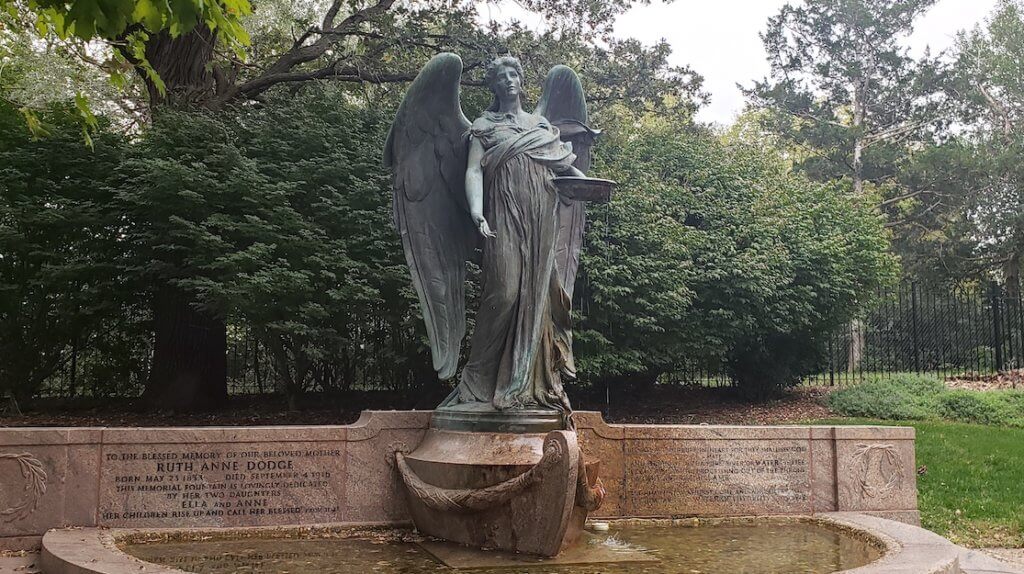 The angel comes from a series of vivid dreams Dodge had shortly before her death in 1916. Dodge described standing on a rocky shoreline, surrounded by mist. Out of the mist, a small boat approached the shore, and an angel standing at the front offered Dodge a drink from a small bowl.

Dodge refused, and she did it again when she had the dream a second time. The third time, Dodge drank from the bowl and she told her daughters she’d been “transformed into a new and glorious spiritual being.”

She died shortly after.

Dodge’s daughters commissioned sculptor Daniel Chester French, who also created the Abraham Lincoln statue on the National Mall, but the planned ceremony for its dedication was abruptly canceled. Instead, the dedication, in 1920, was small and unannounced.

Burials in the cemetery date back to 1826 and include people who traveled the Mormon Trail.

With a history of abandonment, suicide and sexual assault at the old institution, people frequently report activity at this site. Reports include seeing faint figures, having bad feelings in certain rooms, feeling physical contact when no one is nearby, and hearing laughter and people moving around on all floors of the building.

The basement houses the most famous ghost, known as the Joker. He reportedly killed himself in the basement’s padded room where he was held and now he wanders the basement as a malevolent force, throwing dishes on the floor.

The site of Edinburgh Manor was originally a poor farm, where poor, people with disabilities and mental illnesses farmed the land for a place to live before social safety nets existed. A cemetery was added to the property because of the number of natural deaths and fatal accidents at the farm.

The poor house was demolished in 1910 and Edinburgh Manor was built over the site. The new building was a nursing home and a place for elderly and people with disabilities and mental illnesses.

Like many old institutions, Edinburgh Manor was often understaffed and overcrowded, and staff used cruel means of treatment like physical and medicinal restraints on residents. The facility closed in 2010.

This location has a bit of everything. At least one grave of a veteran from every American war, a history as an active stop on the Underground Railroad, ritual masses with leftover pentagrams and candles, and active church services.

Many of the reported spirits are believed to be escaped slaves who didn’t make it farther, but there are few details for any.

In 2006, arsonists set fire to the church, but many of the original logs and structures were saved.

The Mars Hill Church was built in 1856, and is the only log cabin church still in active use in the US.

Reported activity at this site include feelings of being watched or followed, hearing voices and footsteps where there shouldn’t be any, strange lights, and doors opening by themselves. Some have felt tugging at their clothes and cold chills.

In the 1950s, when the jail was still in operation, a jailer wouldn’t live on the designated fourth floor because he heard people walking on empty floors, and sometimes felt like he wasn’t alone on the top floor.

Only four deaths had been reported in the jail, but the building is on top of an old morgue and the jail itself is unique.

The building is one of three remaining rotary jails in the United States, designed in the 1800s to keep contact between inmates and jail staff at a minimum, to make the prison inescapable and to cut costs because it needed only one jailer.

To open a cell, the whole structure of cells was turned by hand crank to align that cell with the one, fixed door on each floor. The cells are small and wedge-shaped, because they’re built around a center column. The Squirrel Cage Jail had three, stacked prisoner levels.

Shortly after opening, many of these jails were welded into a fixed position because of inmate injuries—like accidental amputations and decapitations—when the cells were rotated. The Squirrel Cage Jail remained in use until December 1969, but the rotary mechanism was disabled in 1960 after a malfunction prevented staff from reaching a dead prisoner for two days.

The only rotary jail that still turns is in Indiana.

The other Black Angel monument is found in Iowa City. She’s eight-and-a-half feet tall and, unlike typical angels who look toward the sky, this angel is stooped, watching over the family buried under her wings.

Because of the unusual pose, size and color legends abound—touch or kiss the statue and you’ll drop dead, any girl kissed near her in the moonlight will die within six months, and every Halloween the angel turns one shade darker as a sign of the people she’s killed.

The bronze has oxidized to creepy effect, giving the angel a greenish-black shade that’s only gotten darker in the years since it was erected in 1912. But some legends say the statue turned black because of the sins of the family, or it was struck by lightning the night following Teresa Feldevert’s burial.

The angel was commissioned by Feldevert as a memorial to her second husband, Nicholas Feldevert. His ashes are placed in a repository at the base of the statue, and the angel’s gaze is on Teresa’s son from her first marriage, Edward Dolezal, who died at 18 and was moved from his original grave site to rest beneath the angel.

Feldevert’s ashes were placed beside her husband, but though the monument bears her birth date it doesn’t list a death date.

There are no specific haunts reported at the old prison, but the fact that it was founded in 1839, was operational for more than 170 years and was the site of more than 40 executions leads many to believe it’s likely.

The massive, stone prison housed some of the worst criminals in the state, and was the site of incidents like an inmate killing a guard in the 1800s, inmates rioting in 1981 and a federal execution in 1963 which added fuel to efforts to abolish the death penalty in Iowa in 1965.