Gov. Kim Reynolds and Iowa Republicans rallied against President Joe Biden’s signature COVID relief package, but are now championing a $200 million investment in broadband for the state, which was made possible by the federal American Rescue Plan.

“Broadband has never been more important for our future,” Reynolds said in a press release on Monday. “…With this additional investment, we have invested more than $300 million this year alone on bringing future-ready broadband to rural and unserved areas of our state.”

The rescue plan passed in March and has delivered money to states for COVID-19 recovery and investments in infrastructure.

Reynolds, meanwhile, has used her opposition to what she derided as a “blue-state bailout” (all states benefited from it) to raise money for her reelection campaign. 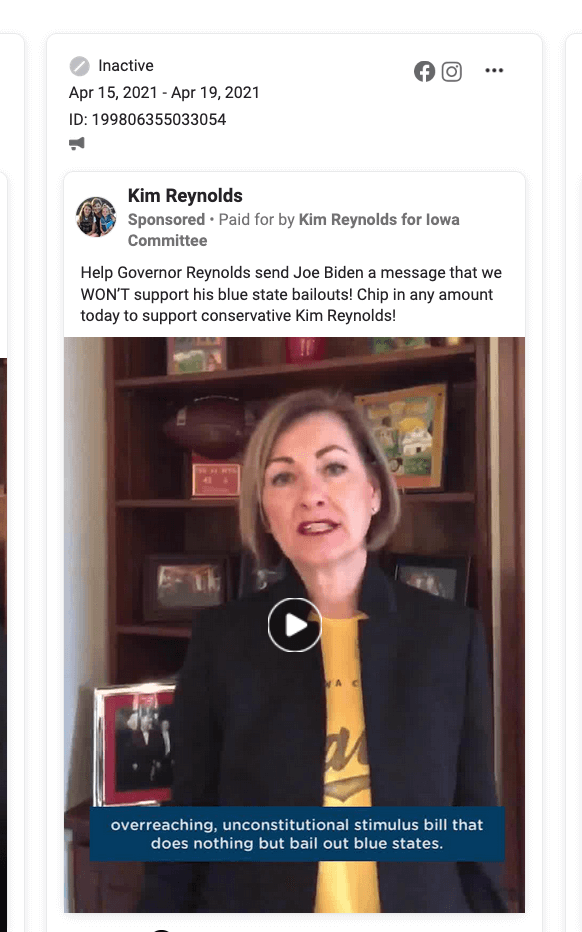 In one ad, she called the American Rescue Plan an “overarching, unconstitutional stimulus bill that does nothing but bail out blue states.”

State Sen. Zach Wahls, a Coralville Democrat, called out Reynolds for celebrating the $200 million in grant money for rural broadband access Monday. Wahls noted Reynolds advocated against the Rescue Plan and that US Rep. Cindy Axne was the only Iowan in Congress to vote for it—all of the state’s Republicans in the House and Senate opposed it.

Thank you so much President @JoeBiden and Representative @Axne4Congress for passing the American Rescue Plan.

Don't forget that @KimReynoldsIA advocated against this plan, and every single Iowa Republican in our congressional delegation voted against it. https://t.co/y9JDaSkUY8

Democrat Deidre DeJear, who’s running for governor, made the same point, adding that she hopes Reynolds doesn’t send the money back, as she’s done for federal COVID-19 aid for testing in schools.

Today I announce great gratitude to @POTUS and @RepCindyAxne and all Dems who voted for the American Rescue Plan. IA is 45th in the nation in BB speed. As I travel the state the stat, is undoubtedly evident. This $200 mil. will help.

The grants will go to communications service providers to install broadband infrastructure in underserved locations in the state.

Iowa has the second-slowest internet speeds in the country—only behind Alaska—and ranks 45 in connectedness. Because of that, Iowa has several state and federal initiatives to improve its access.

Broadband expansion is also included in both infrastructure bills being discussed in Congress.