Waterloo residents know who their mayor is, how to reach him, and what he looks like, which is exactly how Quentin Hart wants it to be.

A stroll with Hart through the city’s redeveloping downtown includes dozens of encounters with residents happy to greet the mayor and a few motorists honking or rolling down windows to give the three-term—and four-term hopeful—a shoutout.

“Quentin is a people person,” said LaTanya Graves, a longtime Waterloo resident and president of the local NAACP chapter.

Being a tangible figure in Waterloo is something Hart values.

“We had mayors that were visible, but I don’t think they were this accessible,” Hart said. “I don’t want to take anything away from them, but I pride myself on being one of the most accessible mayors and I enjoy people too. I genuinely enjoy having conversations and talking to people. It’s part of my DNA.”

The 50-year-old grew up as a shy kid—he’s since become an accomplished public speaker—on Waterloo’s northside. What broke him out of his shell was wanting to connect with people from all walks of life.

Bringing everyone together is important to Hart, who is the city’s first Black mayor and one of the few Black mayors ever in Iowa. Still, making history wasn’t on his mind when he ran for mayor in 2015 after serving two terms on city council.

“People were saying it, but I’ve always said, ‘I want to be the best mayor, not the best Black mayor,’” Hart said.

Waterloo is unique among Iowa cities since being mayor is a full-time job and the position is akin to being an elected city administrator. The mayor oversees the daily administration of city employees and departments in addition to being a ceremonial figure.

Getting that office on the first floor of Waterloo City Hall was a winding journey for Hart that included early defeats and learning how governing works. One of the problems he saw from the outside looking in was that government moved too slow.

Hart, who held multiple positions at Hawkeye Community College and ran a nonprofit that restored homes in Waterloo before he became mayor, thought if he ran for office he could utilize government resources for community improvement.

He lost an Iowa State House race in 2002 that went to convention to a person who was on the Waterloo City Council. When she vacated her council position, Hart tried to win her seat and lost that race too.

In the interim, Hart focused on helping his community in other ways including through his From the Heart Waterloo Home Enhancement Project, and started serving on various city boards and commissions including chairing the planning and zoning board.

“So I got some really good experience on how to run meetings, the internal workings of city hall and governmental things,” Hart said. “So I ran four years later for that same city council seat in a three-person race and I won.”

Hart was sworn in as councilman in 2008 and hasn’t left city hall since.

“I used to sit in meetings and throw stuff out at the mayor, ‘Do this, do that,’” Hart said. “Now, that’s what people do with me.”

One of those people is Waterloo Councilman Jonathan Grieder, who started his first term last year. He considers the mayor a mentor and appreciates some of the recent objectives city officials have accomplished there by working together.

“I have come to council with a different perspective as a young dad, as a person in their early 30s and he has always been someone that I can talk to and bounce ideas off,” he said. “He’s been very receptive to a lot of the work that we’ve done.”

A few highlights Grieder noted were the creation of Waterloo’s incentive program for child-care facilities, a mandate for equitable diaper changing stations in public restrooms, and working directly with Hart on the city’s mask mandate last year.

“I found him very easy to work with, someone who cares deeply about our community is deeply invested in the success of our community and someone who wants to help others help Waterloo be wildly successful,” Greider said.

Graves, who knows Hart on a personal and professional level, noted his genuineness and ability to connect with all people separates him from some of the city’s former mayors.

“He’s doing an awesome job because he’s community-oriented and the past mayors, you know, they had a relationship—not all of them—but some of them had a relationship with the NAACP; however, what’s different with Quentin?

“He’s community-oriented and not for certain sectors or one race or ethnic group; he puts everyone on the forefront when it comes to being included. That’s what I love about him; he can cross all racial barriers.”

It’s fitting that Hart’s office features multiple tributes to the Rev. Dr. Martin Luther King Jr. On the wall directly behind his desk is a painting of King and a cabinet below features a book with Hart’s favorite King quote on the cover: “The ultimate measure of a man is not where he stands in moments of comfort and convenience, but where he stands at times of challenge and controversy.” 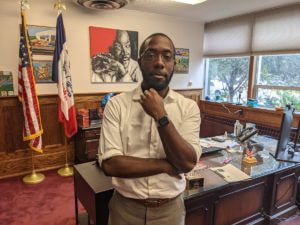 The fascination with King comes through osmosis from Hart’s father, Grocee, a retired John Deere factory worker who moved to Waterloo from Starkville, Mississippi, to escape Jim Crow.

“When I was younger—when he was taking us to college—he used to pull out the old tape player and play different speeches from Dr. King,” Mayor Hart said.

Hart never asked his father why he played the tapes, but he thinks it was his Grocee’s way of showing him his potential.

Thinking about King and other Civil Rights pioneers—some of whom are also honored in his office—helps keep Hart focused on the big picture even when some attacks on his name seem to focus more on his skin color rather than his policies.

“People say something that’s bordering some type of race issue or when people get really nasty in their dealings with the city or whenever I get tired, I think about how glad I am that Dr. King and the others didn’t get tired when they fought for me to be where I am today,” Hart said.

Hart pays their sacrifices forward by influencing Waterloo’s next generation, according to George Phillips, Teen Director of Boys & Girls Clubs of The Cedar Valley, where the mayor is a regular volunteer.

“He looks like many of the kids from around these neighborhoods and he shows them that there are opportunities for them,” Phillips said. “They can be good leaders too.”

There have been no shortages of challenges for Hart since taking office. A damning 24/7 WallSt article from 2018 called Waterloo the worst place to be Black in America, and a COVID-19 outbreak at Waterloo’s Tyson Foods’ plant made international news.

“The safety of our community was upfront and prevalent with COVID—you don’t want to be known for being a COVID hotspot—but, you know, our community banded together,” Hart said.

For the first time in two cycles—Waterloo mayors serve two-year terms—Hart has a challenger for his seat, but his focus remains on doing what he can for the people of his hometown.

3 Comments on "An Ever-Present Mayor in the Community, Hart Focuses on City Unity"