In one of the first floor speeches as an Iowa state senator, Sarah Trone Garriott breathlessly described the realities of COVID-19 she had seen in her own community.

“Over the course of the past year I spoke with thousands of constituents of every political affiliation,” she began. “Educators told me of their exhaustion of trying to teach in-person and online at the same time. Teachers like my own son’s teacher, who have 31 third graders in their online class.”

The chamber at the time was discussing GOP efforts to reinstate the death penalty.

Trone Garriott has spent her initial two months as a new lawmaker using this same strategy—calling attention to truths like COVID-19 while the Republican-controlled state government is attempting to pass “extreme” legislation, seemingly disconnected from the needs of a state grappling with 5,470 dead from the pandemic.

The senator is doing it her way, free from the trappings of business-as-usual. Though the Legislature has been convening in-person besides online subcommittee meetings, the Democratic caucus has maintained efforts to be mostly virtual amid threats of the pandemic.

Most first-term legislators (especially those from swing districts, like the formerly Republican one Trone Garriott flipped by less than 200 votes last year) are advised by their party leaders to start slow and keep their head down. But given the stakes of Iowa’s pressing issues in 2021, Democrats’ small caucus in the Senate (they hold just 18 seats), and the ease with which legislators can connect through social media now, Trone Garriott has taken on a more proactive and prominent role.

And that’s okay for the Windsor Heights Democrat. Shrewdly active on social media, the senator’s engagement with a growing online constituency has made her visible, active and helpful from the outset of her term. She’s also spoken on the floor during most debates, and she was selected as the ranking member on the Natural Resources and Environment committee, not something every freshman gets entrusted with.

“My constituents, they put trust in me and a lot of people supported me and helped me to win the seat. And I feel that duty to get to work for them,” she said in an interview with Iowa Starting Line. 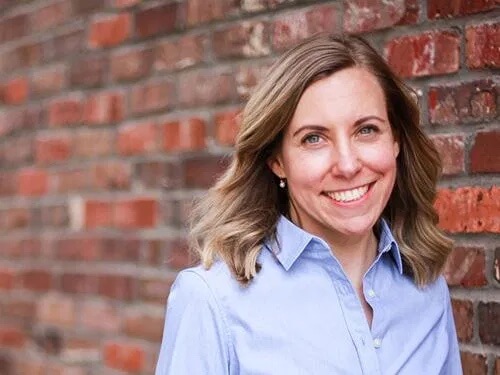 She hasn’t had the time to put her head down and simply follow her minority colleagues’ lead at the start of her four-year term.

“Every situation that I’ve ever been in, I’ve wanted to get involved and be engaged from the get-go. I learn by doing,” she said.

“I was a hospital chaplain and the first day of my residency in Philadelphia, they were like ‘someone has to spend the night and be on call!’ and there I was, not knowing how the pager worked and having all these traumas and horrible things happen all night long. That was my first day. When I was an Americorps VISTA (anti-poverty volunteer program) in New Mexico, I went to work for a legal aid program. I show up in town and I’m the only VISTA in the office, I’m the only VISTA in the community. My supervisor met me at the office and said, ‘Well, you can sleep at the office until you find a place to live, I’ll see you on Monday!’”

Iowa activists and engaged community members at least have noticed her online presence. Oftentimes you’ll see her organically tagged in people’s tweets with the other senators who engage online the most, like Sens. Claire Celsi, Rob Hogg and Democratic Leader Zach Wahls.

There is a downside of being sworn in during a pandemic, Trone Garriott said, which is confusion and isolation. Her Democratic colleagues have tried to be helpful in teaching her how to speak on the floor, voting and participating in committee meetings. Members of the GOP caucus have been slightly more difficult to get acclimated with.

“It’s such a strange time, and there are so many of my Republican colleagues that I haven’t spoken to. There are folks who I’ve tried to stop and chat with just to be like, hi, this is who I am,” she said. “But it’s a challenge when some folks won’t wear masks. You can tell that COVID isn’t a concern for them at all.”

During Trone Garriott’s first month in office, Republicans at the statehouse have put forth legislation that seeks to divert public school funding to private schools, relax gun control and increase abortion restrictions in the state’s constitution, reinstate capital punishment and accelerate over a dozen anti-LGBTQ proposals, among other pushes for conservative proposals.

A sweeping, widespread election bill aimed at tightening voter’s rights is also waiting for the Governor’s signature after a contentious week of pushback from Democrats. The fast-tracked legislation was passed by both chambers on Thursday.

In all of the turmoil, the senator hasn’t shied away from the spotlight.

The first big, controversial legislative topic was school vouchers, on which Trone Garriott took a larger role. Actively updating constituents on her Twitter and Facebook about the bill’s movement, Trone Garriott included the names, emails and phone numbers of her Republican colleagues, urging Iowans to press them to stop the bill.

“Considering the dynamics, it’s just we don’t have the votes to pass the things we want to pass and the way that the deck is stacked, I can introduce all the legislation I want to and it’s not going to go anywhere,” she said. “One thing that I decided I needed to do that was important that I can really offer, the community was educating them about what’s happening, how the process works, how they can be involved.”

During voucher discussions, Trone Garriott made videos online to make the content of the legislation more digestible, and shared an interview she conducted with the CFO of Des Moines Public Schools about the how bill would impact her constituent’s property taxes.

Trone Garriott started getting backlash in early February when she read a Muslim prayer written by one of her constituents on the Senate floor. Trone Garroitt is also a pastor.

“Some of the people who were making comments, they were saying just horrible things about our Muslim neighbors — that they hate freedom and that they’re trying to take over the country and they want to hurt Christians — and all of these terrible things that aren’t true,” she told the Des Moines Register.

But she doesn’t plan on stepping back from her active approach to state legislature any time soon.

“One of the big challenges, because I realize we still have about two and a half months left of the session, is how do you maintain energy and hope with seeing frustrating losses, seeing bad policy being passed, and hearing public outcry and sharing that has been ignored,” she said.

But the small wins have kept her going, like hearing from constituents or seeing her efforts play out in vote counts.

“The reality is that when people do reach out to their legislators, it does make a difference. We see it in small ways. We see it in three Republican senators who did not vote for the voucher bill.”