News broke this week that a number of central Iowa private schools on Friday were vaccinating their staff, and for some public educators fed up with school privatization and in-person learning efforts from the Legislature, it was the last straw.

The partnership between the private school and health care provider sparked significant frustration among the state’s public educators who question vaccine equity during a time when an “assault on public schools” has been prioritized at the Capitol. Many public school teachers scrambled this past week to find vaccination openings that they could actually attend amid classes.

“It’s hard to not be skeptical that there isn’t a money trail with these vaccines, IDPH, and at least the Des Moines area diocese … we’ve been told there is a shortage and not enough vaccines for the bulk of educators,” said one Ankeny Community School District teacher who requested to remain anonymous.

“With the push of the private school vouchers and the coincidental privilege these private schools are getting to receive onsite vaccinations earlier than any public school in the metro, it’s hard to not feel like public educators are getting stiffed simply because we work in the public sector.”

UnityPoint spokesperson Macinzie McFarland said that Dowling Catholic and several other schools in their diocese were able to procure the vaccines for their staff because they communicated early with the company.

“We were ready and they were ready first. They reached out first, they were ready to go. It was still very dependent on if we got the vaccines for them to be vaccinated. That happened and that’s how that came to be,” McFarland said.

But some public education advocates just aren’t convinced of fair play between the private schools and health systems amid everything else happening in Iowa politics.

Urbandale School Board director Stacy Anderson in her role as a public citizen on Tuesday sent a records request to Dowling Catholic administration, asking for all correspondence related to the school’s acquiring the vaccine.

“As a mom, community member, and UCSD Board Director, I am very concerned about teachers and vaccine equity,” she said in an interview with Iowa Starting Line. “I question how private schools were able to secure such large quantities of the vaccine. At a minimum, I question UnityPoint Health’s larger commitment to our community and why the decision was made to get the vaccine to Dowling and other parochial schools.” 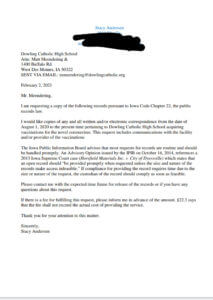 A UnityPoint CEO’s son attends Dowling Catholic High School, reported KCCI Des Moines, though “Both Dowling and UnityPoint said his attendance played no factor in the scheduling of the clinic … Dowling Catholic played ‘by the rules’ and is hosting a COVID-19 vaccination clinic because they were at the front of the line.”

For some public school teachers, the news of private school vaccinations was difficult to hear during an already challenging legislative period for public education. Gov. Reynolds’ school choice bill has been increasingly unpopular among public teachers since she unveiled it last week, along with her requirement that 100% in-person learning options must be available across the state by Feb. 15 — long before most educators are vaccinated.

Iowa City public educator Casey Leonard said she knows of “many Iowa educators and administrators” who are considering leaving the state because they do not feel valued or supported.

“The school choice bill is wildly unpopular among most Iowa educators I know. The Legislature should listen to teachers, administrators, and school staff on this issue. Public money should go to public schools only. As a state, we should be investing in public education, rather than funneling funds away from our public schools,” she said.

“I am in favor of as many people getting vaccinated as soon as possible, including all educators, but there should be equity in the way the rollout happens. I think there are legitimate concerns that the rollout has not been equitable thus far.”