Democrat Theresa Greenfield is a scrappy farm kid who knows the price of corn. Republican Joni Ernst is a member of President Donald Trump’s inner circle, working with him to defeat a dangerous liberal agenda.

That’s how the U.S. Senate candidates sold themselves to Iowans during their last week of campaigning across the state before Election Day.

The two women, competing in one of the most expensive races in the nation, both crisscrossed Iowa in decked-out RVs, stumped for their respective party’s presidential nominee upon his arrival in the state and held rallies with ardent supporters in their final push for the seat.

But while Theresa Greenfield paused her RV tour for a day because of a staffer’s COVD-19 exposure, Ernst, at campaign events, stood alongside Gov. Kim Reynolds who mocked the safety precautions. While Greenfield toured countless farms and spoke to individual farmers, Ernst led a convoy of trucks in a “Trump Parade.”

While Greenfield attended car rallies, where attendees stayed in their vehicles and tuned into a radio station broadcasting her stump speech, Ernsts’ rallies were packed to the brim, often inside, with limited mask-wearing or social distancing.

And if their campaign styles stuck strictly to party lines, and so did their messaging. With little time left in the race, the candidates spent their time on the trail questioning their opponent’s financial backers, defending their ideas on trade and farming policy and making their case for being the perfect candidate for right now — dependent on the outcome of the presidential race.

“The choice is clear, folks. We can take the path of prosperity, economic freedom and opportunity. Or we can end up going down the separate road full of pitfalls that the radical left wants to see us on,” said Ernst before introducing Vice President Mike Pence at a Make America Great Again rally in Des Moines last week.

“Extreme abortion. Radical environmental ideas that kill Iowa jobs. Rolling back our second amendment rights,” she added. “Taking away our RFS and forcing every American to buy an electric vehicle. Folks. This is not the road we want to go down.” 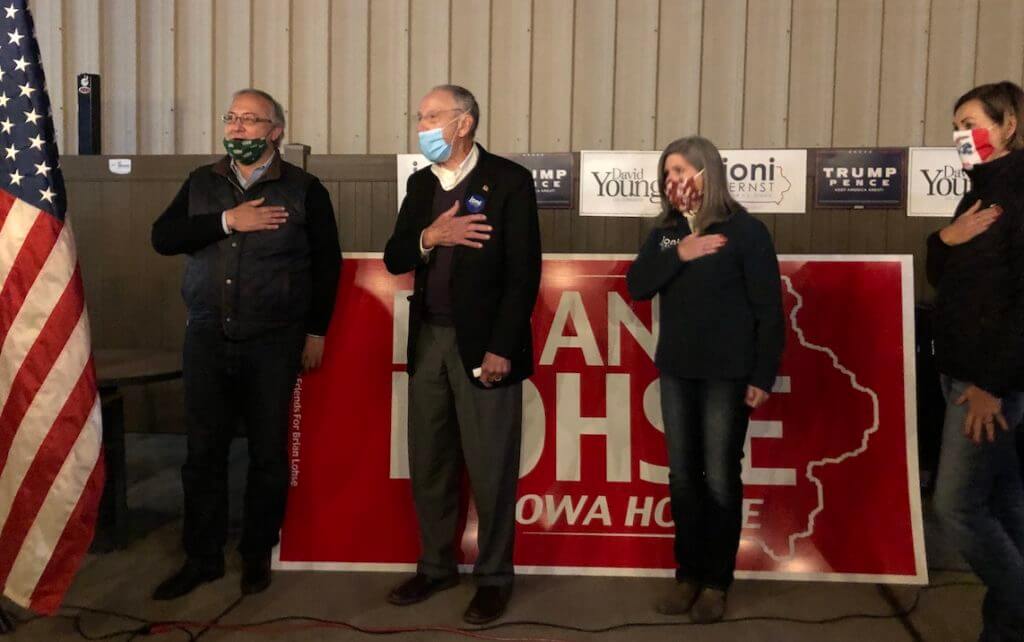 On the stump, Greenfield still introduces herself to Iowa voters—the political newcomer has not campaigned with the same public health laxity as her opponent despite holding over 350 events through a mix of in-person tours, tele-town halls, and socially distant rallies.

“I’m a businesswoman, the mother of four, I’m a military mom and a scrappy farm kid. By the way, I do know the price of corn,” Greenfield says at events. “I grew up during the farm crisis. And I watched families go bankrupt. I know what a bankruptcy rate at an eight year high means … And I also know tough times. I was widowed at the age of 24. And my first husband Rod, he was a lineman for the power company. He was an IBEW member. Because I’ll tell you, the boys and I wouldn’t be here today without social security and without his union benefits. They kept us from going into poverty.” 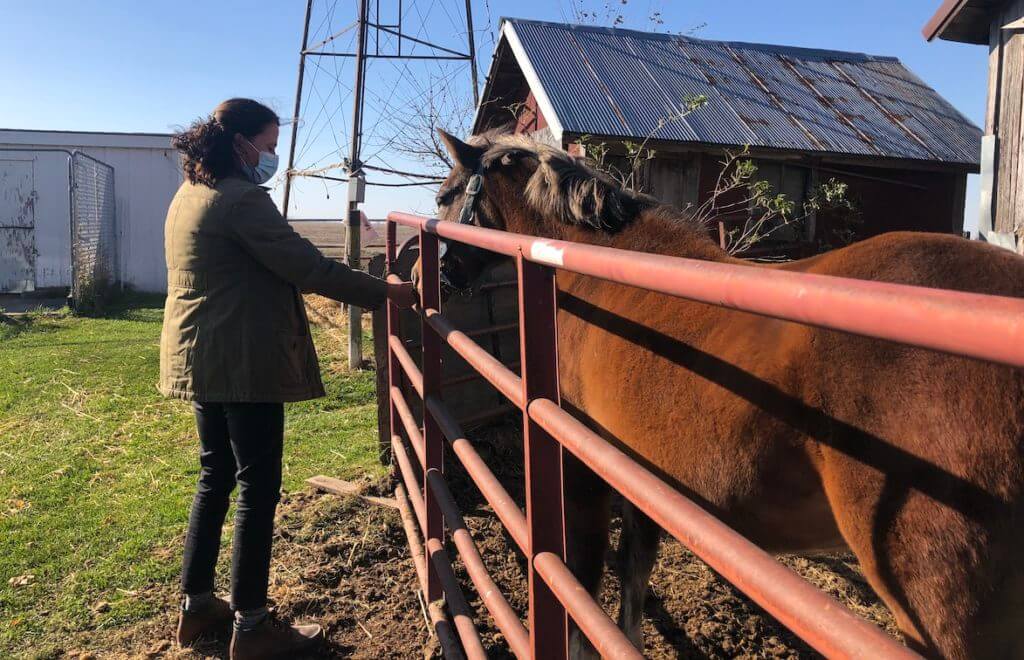 She highlights how important social security was to her own survival, and how her competitor’s actions in Washington could gut the program. She also emphasizes how Ernst “refuses to require Medicare to negotiate for those drug prices” and “sold out” Iowa’s farmers in favor of big oil executives.

“Now Sen. Joni Ernst, she talks about privatizing social security. Going behind closed doors to gut social security. And so I got in this race, and I want grannies all over the state, young widows, folks that rely on social security to know that I am going to work my tail off to sustain social security for generations to come,” said Greenfield at a Get Out the Vote event in Marion, IA on Saturday.

“She’s been working hard for 6 years to keep corn prices down and drug prices up,” Greenfield added of Ernst. “I’m going to do the opposite.” Ernst, on the other hand, has appealed to the star-power of her party in the last days of the race. In her famed visit to all 99 of the state’s counties, the incumbent focuses on questioning her opponent’s background in politics, defending her fight for renewable fuel standards and the importance of her reelection to maintain a Republican majority in Congress.

“So her campaign in 2018 when she was going to run against David Young was caught forging signatures onto her petitions to get her name onto the ballot … Does this sound like the type of leader that you want to send to the United States Senate? Folks, I have truly spent a lifetime of service,” Ernst said at a recent rally in Bondurant.

“We’ve had many successes through the Trump administration—many successes with a Republican majority—we absolutely have to keep it that way.”

National attention on the race has also made each candidate’s finances subject to scrutiny, especially from each other — Ernst taking corporate PAC money and Greenfield benefiting from funds from out-of-state donors.

Greenfield, who raised a record-shattering $28.7 million in the third quarter, could end up outspending Ernst by nearly that much by Election Day.

But Ernst warns those across the state that Greenfield’s money is just the “coasts” trying to influence Iowa’s election.

“So my opponent, now she had a record haul, fundraising this last quarter. Over $28 million raised in three months. The brunt of that coming from California, New York and New Jersey. $28 million. So over four times what I raised,” said Ernst at a recent campaign event. “Okay, so we see that there is a lot of special interests and taking this Senate seat from a red Senate seat to a blue Senate seat. So we have to push back on that.”

Ernst, however, does not lay out measures she would take to combat the outside money she criticizes so much.

“I think we can all agree there is way too much money in politics and it is terrible,” Greenfield said at a Marion County event over the weekend. “Absolutely terrible. And as part of getting into this campaign, the very first policy plan I put out was one to end political corruption. And I’m really the only candidate in this race that has one of those plans because I’m the only one who really wants to end that kind of big money in our politics.”

“What can I roll up my sleeves and get to work on for you when I’m elected?” Greenfield asks each farmer on every one of her numerous farm tours taken over the past few weeks.

Most answer by indicating they need higher crop prices and want her to work on trade and the ethanol industry. But while touring, Greenfield displays her wide range of farm knowledge—she can articulate anything from crop prices before the derecho to estimating how long it would take to harvest the fields.

“She gets it,” said farmer Matt Russell, after the two discussed his Marion County farm’s transition to carbon farming. 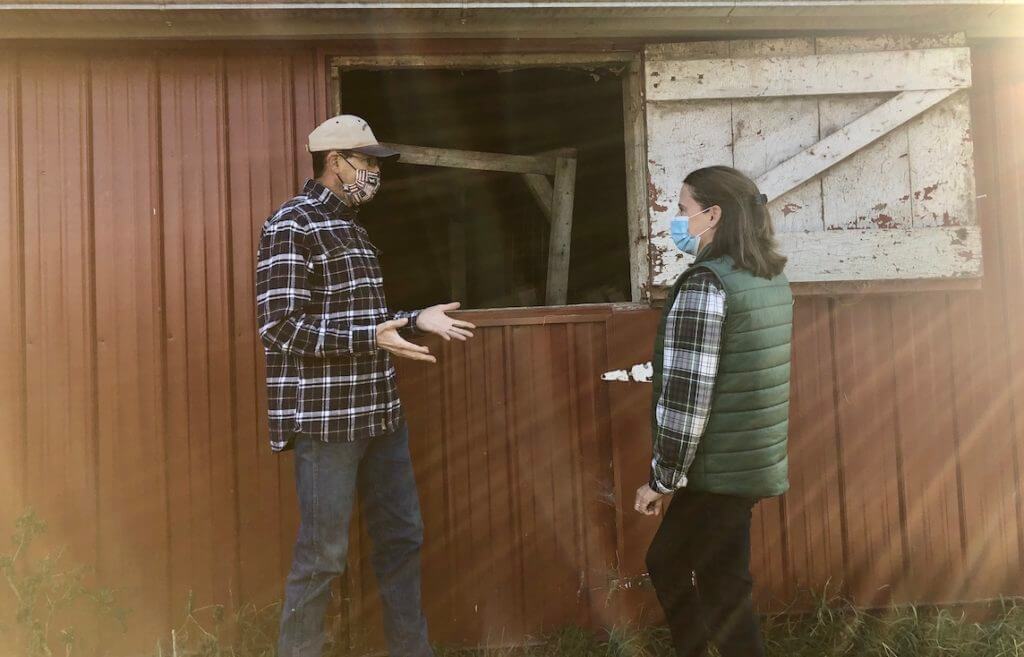 Greenfield said one of her number one priorities is working for the farm economy.

“One of the things I hear consistently from farmers is, and I don’t care if it’s somebody that’s 100% organic or someone who’s growing white corn or someone who’s running 5,000 acres of commercial row cropping. They want their markets back. They want the haphazard trade and reckless tariffs gone. And the go-it-alone approach—be tough on China, of course. We have to do that. But they want to compete. And I just hear it over and over again, and the struggle has been that their income is down,” Greenfield said in an interview with Iowa Starting Line.

“I’d say that almost 50% of farms right now, because of trade and tariffs, are considered financially vulnerable. So they’re looking at very difficult times.”

Ernst, at her events, fervently defends her work for farmers— recently, she tells crowds an anecdote about her right for the RFS that “President Trump always tells.” “I really, really enjoy working with President Trump. And I can share some things with you—like he will call just kind of randomly. It’s nice that I’m in that group of people that he feels he can call if he has a question about something. I love and appreciate that,” she said at a recent campaign event.

Ties with their party’s leaders

Biden cultivated a strong message in support for Greenfield’s election to a crowd of over 250 parked cars. He noted her character and ability to bring civility to Washington. 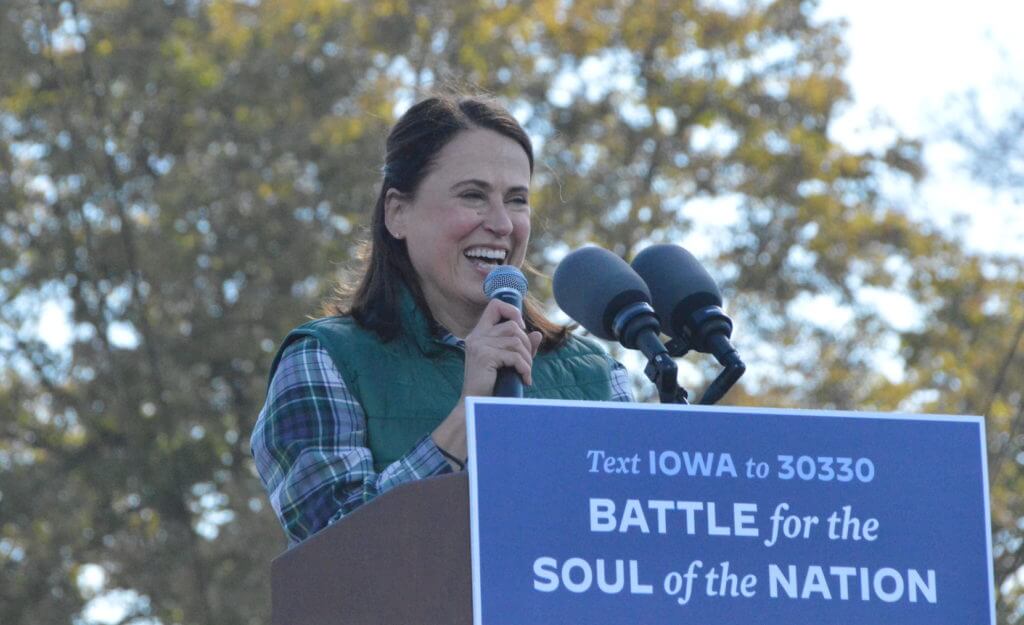 The candidate also highlighted a similarity between him and Greenfield—the fact that they both have experienced loss and are well-suited to lead their constituents through COVID-19, another period of trials.

“Folks, there’s something else. Theresa and I both lost our first spouse. We’ve both been single parents to young kids. We both found a way back from broken places,” he said.

When Trump visited the state for the second time in two weeks, he displayed his usual fondness for Ernst and noted her devotion to his administration and the Republican ticket.

“She sees, she understands, she believes,” Trump said at his Dubuque rally before inviting Ernst to say a few words on stage. “Joni is fantastic and a special woman and she loves your state and she loves our country.”

And the Senator replied with similar affection.