It has been an eye-opening experience to witness how these elections have been handled by the Iowa Democratic Party, now led by their new chair Mark Smith. I must say it is refreshing to see that the party is finally giving the Latino community the place and relevance as an integral part of the political process in Iowa.

One of the biggest complaints by many grassroots Latino leaders has always been the fact that the party would show up right before any election and disappear once they thought they had secured the Latino vote. The party was told repeatedly that it felt like Latinos were an afterthought or taken for granted.  Today I can say everything feels different, a good kind of different.

I spoke with Mauricio Diaz, 23, the new Constituency Engagement Director at the Iowa Democratic Party. Mauricio is a DACA recipient who started working for the IDP this past February.

“We are trying to build an infrastructure where we are including all communities, like the LGBTQ and rural communities so we can have a strong Latino Caucus in the future and a long-lasting relationship with the Latino community,” he said.

Another important change in the IDP is the fact that Mauricio’s position is now permanent with the purpose to solidify an ongoing connection with Latinos over time.

A financial investment and a line item in a budget are indicators that an organization is committed.

In addition to a permanent staff person, there is now a budget allocation of $56,000 for this election cycle for digital and bilingual ads educating community members on how to vote and encouraging them to vote.

“We have the bilingual dialer every Thursday, Saturday and Sunday, where we have conversations with our people,” said Mauricio. “One of the things we are finding out is the fact that even when many community members are bilingual, once we start speaking Spanish, the conversation changes immediately, people are more relaxed.”

Every community is different, and to reach the Latino community, organizations must learn about our culture and the way we communicate.

Another pleasant surprise was to learn about Todos con Biden text banking. The message is for participants to encourage others to contact family and friends to tell them to go vote.

“As organizers, we can do our best to talk to people, but it really is based on people talking to their friends and family,” Mauricio explained. “That is relational organizing, and that is the way our community communicates best.”

Latinos are an extremely important constituency for Democrats. The Pew Research Center reports that about 32 million Latinos will be eligible to vote this November and although in Iowa Latinos make up only 6% of the population, there are 67,000 eligible voters and 20,000 of them are new voters. Seventy percent of those voters are registered Democrats. Those numbers can make the difference, and now Latinos are motivated to vote now more than ever.

Isabella Murray, a coworker, and I traveled yesterday to Marshalltown to attend one of several events organized by the Democratic Party to rally and encourage Latinos to go out and vote. Even with the rain and cold, people gathered in a parking lot where Mark Smith, the party chair, talked to Latinos about the importance of their vote. Sue Cahill was there too; she is running for the Iowa House in Marshalltown. Right after the event, folks walked to a Latino Market where a bilingual early voting location was stationed. 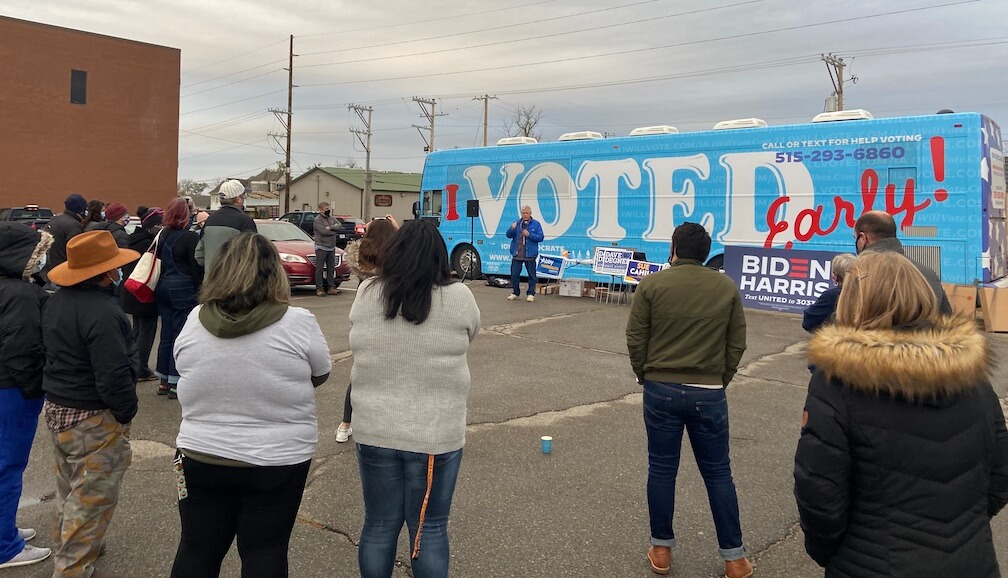 Yuri Sanchez, 31, born in Chicago, and her father Jose Sanchez, 76, a naturalized citizen since 1979 were among the first people voting at the store.

When I asked Yuri about her motivation to go out and vote, she said, “We need changes, we need to change this President and the racism, injustice and inequalities with this administration. It is extremely important for Latinos to go out and vote since we have been victims of his administration’s abuse against our people. Most of us come here to work hard and improve the lives of our families.”

Jose added, “This President has many of our kids in the border in cages and their parents have been deported. What he has done is not okay, but many people like him.”

While in Marshalltown, I also talked to Oliver Hidalgo-Wohlleben, the Biden campaign’s coalitions director, who was a political director for the Sanders’ presidential campaign in Iowa and then in California. As the son of an immigrant this election is personal to him. 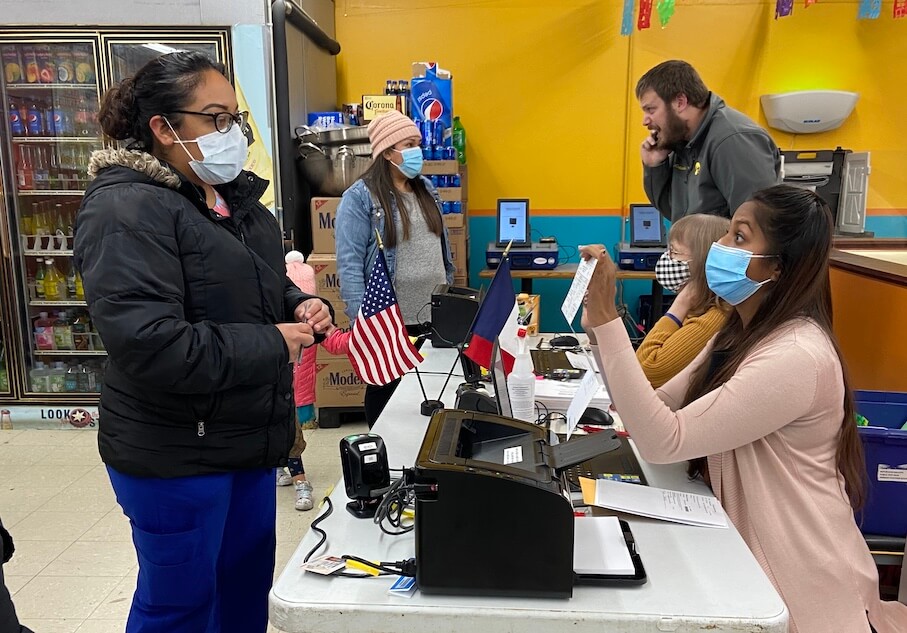 “My dad became a citizen last August. He moved to Iowa when he was 16 yrs old and he just became a citizen so he can vote. I am making sure every day that Latinos know what they can do to vote, and they have the opportunity and information to do it.” 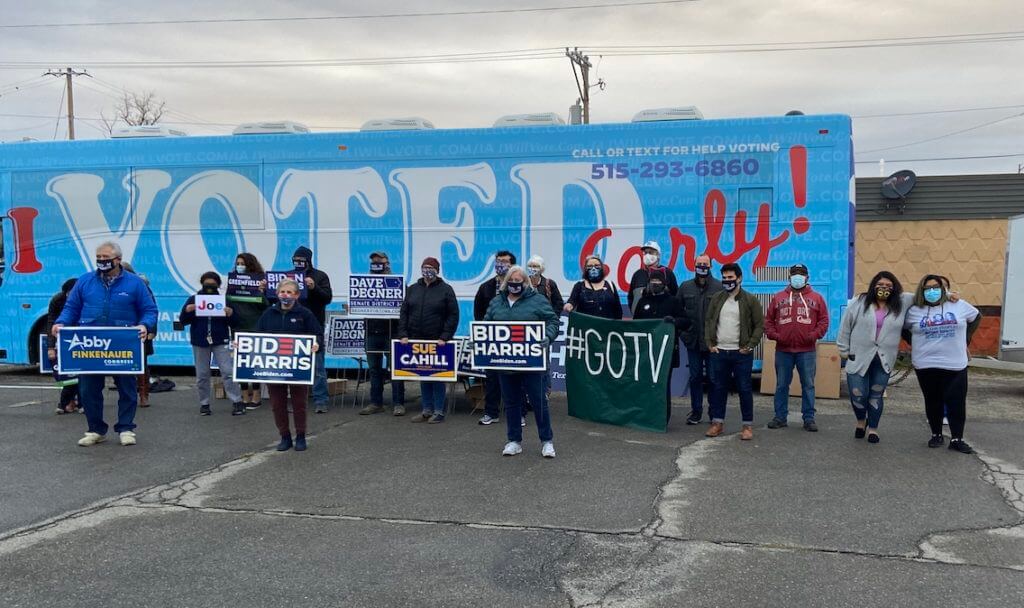 Another important component of what the Biden campaign is making sure the community is informed about what is at stake.

“Latinos are the most likely to be under-insured or uninsured. We have been subject to the attacks by the Trump’s administration, more than almost any other community we have so much at stake, so people are fed up with this administration and we have seeing an overwhelming support from Latinos,” Hidalgo added.

Our day in Marshalltown was full of hopeful surprises for Latinos and the changes many have been asking for in the party. For years we had a joke among our friends: “the party treats us just another girlfriend/boyfriend — it’s time they put a ring on it and truly engage with Latinos.” Funny at the time, yet sad all together.

The new chair has lived among one of the largest Latino populations in the state — Marshall County — where Latinos make up 23% of the residents there. He has witnessed and experienced the growth and contributions of Latinos. In addition, Mark Smith has a wealth of experience at the Iowa Legislature and with campaigns as chair for the party in his county.

Visiting Marshalltown, meeting Latino constituents and individuals working to uplift the community gives me hope. These new investments and intentional efforts to include Latinos in the party in meaningful ways, gives me renewed enthusiasm too.

The Democratic Party finally chose a leader that understands the value of true inclusion and commitment to communities that have been either ignored or misrepresented in the past. I am excited for the future of the engagement between the party and Latinos. It was long overdue.

As a Latina and as an advocate, I am excited for the changes I am witnessing, I also hope that this long-awaited engagement continues even beyond changes in leadership. It is about time political parties and other organizations commit to meaningful inclusion. And to Latinos out there, looking from the sidelines, “Si se pudo”!