Immigrants always bring a part their home country with them. In years past, immigrants were told by their parents to speak English and assimilate. Newer generations of new Iowans share their heritage openly and proudly.

We bring our suitcases full of dreams, carrying our culture with us. As parents, we want our kids to learn and carry on that culture too, and that’s exactly what Juan and Martha Piña dreamt when they had their two children.

Like my own immigrant story, it is a tale of two worlds, our love divided between the country of our birth and the one that adopted us. Our traditions, stories and history run through our veins and reside in our hearts.

The Piñas are originally from Villanueva, Zacatecas in Mexico, and one of the most important traditions for them were charreadas, or Mexican rodeos. Juan’s extended family owned ranches and worked in the fields, and horses were a part of their landscape. It was normal for many of these ranchers to become charros.

A charro is a traditional horseman or cowboy from Mexico. They typically dress in elaborately decorated outfits with close-fitting pants, jacket or serape, and sombrero for charreadas. Charros are a notable part of traditional Mexican culture; these lavishly dressed horsemen with big sombreros are one of the most identifiable figures in Mexico.

Juan’s family migrated to Los Angeles in 1989, where he immediately started working at a restaurant as a dishwasher. He would travel to his hometown to spend time with family, and in one of his visits, he met Martha. The two fell in love and were married in 1993.

Nearly three years later, their daughter Alejandra was born, and a boy followed two years after that.

“When my daughter was about to turn six, she asked me for a horse as a birthday gift,” Juan said.

They lived in the city at that time, but they were able to buy a small horse from a friend who owned a ranch in the suburbs where she could go ride the horse every other week.

“Once you own a horse, you start hanging out with other people who own horses too and start going to charreadas,” Juan explained.

As their daughter became more involved in her equestrian journey, she became a part of the “Escaramuzas” — these are female-only equestrian events in the Mexican Charreria.

Although the male Mexican cowboys are famous around the world, their female counterparts, Escaramuzas, are practically unknown outside and within Mexico. These rodeo queens embody the same values and possess the same abilities as male equestrians.

“We moved to Des Moines in 2007 with our two kids, three horses and the parakeet looking for a better place to grow our family,” Juan said.

Des Moines was not necessarily a coincidence, as they were following Juan’s siblings. By then Juan’s brother already owned a ranch in the middle of the city of Des Moines, which allowed them to continue with the sport and tradition they love.

The family began to participate in the Iowa State Fair parade and the horse fair on a yearly basis. Their teams have also competed and participated in different events around the state and in the country.

When I visited with the Piñas and the team of Escaramuzas, they invited me to Juan’s brother’s ranch. As I arrived, I felt I transported to a small town in Mexico. The ranch has horses, chickens running about, dogs barking and small groups of young Mexicans practicing their horse tricks in the arena. 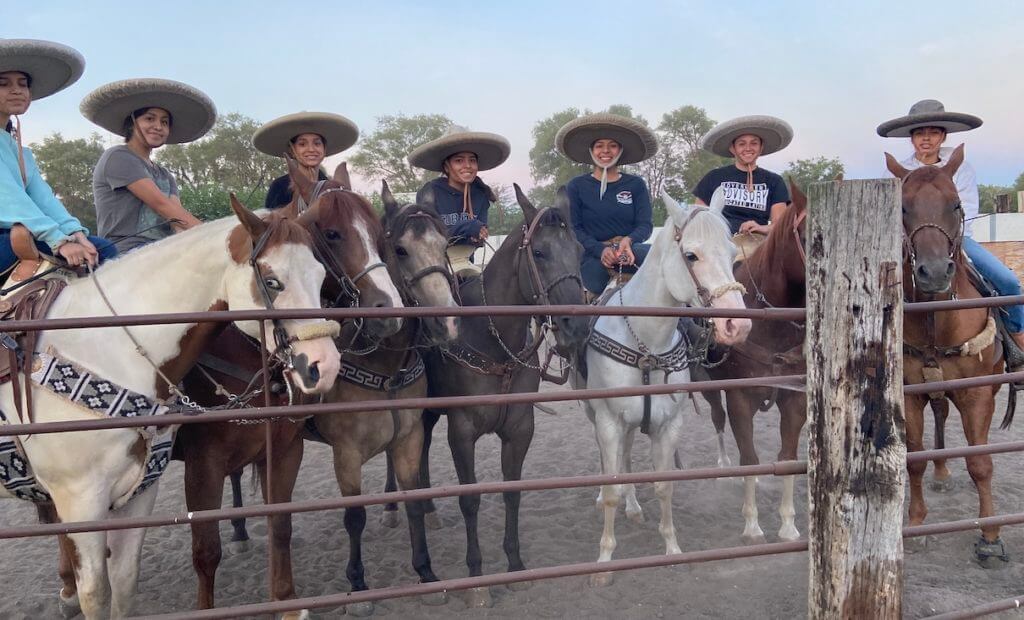 This place brought about such emotions and memories from my childhood in Mexico, I was moved nearly to tears. It is a unique space, a flashback.

I met a group of seven beautiful young women with their horses (15 to 25 years old), among them, Juan and Martha’s daughter Alejandra.

All of the young ladies are U.S.-born and they share their parents love for the sport.

“Although my mom is from El Salvador and my dad is from Mexico, I grew up with the Mexican tradition,” one of the young ladies, Isabel Marquez, told me.

Patricia Mendez from Salvadorian parents became a part of the team last year when a friend invited her to ride horses at the ranch.

“I love this sport because of the adrenaline I feel when riding the horse and competing. I just love everything about it,” said Perla Hernandez, another member of the team.

They practice twice a year in a regular season, either to compete or do presentations in different events around the state.  Last year the team had their first tournament and their first formal Escaramuzas coach.

Alejandra Piña shared that before having their first coach, they used YouTube videos to learn more about the sport. The older team members have been instrumental in coaching younger participants as well. They also train their horses.

One important requirement in the Escaramuzas is to ride sidesaddle, perform tricks with their horses and wear voluminous and beautiful dresses.

Alejandra’s mom also has an important role in the team.

“This is a family sport; our daughters take care of their own horses with the help of their fathers, and we as moms are in charge of their dresses and makeup,” she said.

There are many rules for what Escaramuzas wear, from carrying an underskirt with three ruffles to a lace trouser embellished with ribbons and Mexican sombreros.

“About a year ago my grandmother passed away and I was very depressed. I was always sad until my friend Joanna invited me to be a part of this team and that changed me,” one of the younger participants told me.

There is a sense of belonging, a sense of family in this cultural tradition. The older ladies help the younger girls. They take the role of big sisters in a way. They love their horses like part of their family.

Cynthia Piña, founder of Las Escaramuzas Zacatecanas and the daughter of the owner of “El Rancho El Carretero,” also trains the next generations of riders.

“I have eleven students that are three to nine-year-old training in wooden horses,” said Cynthia. 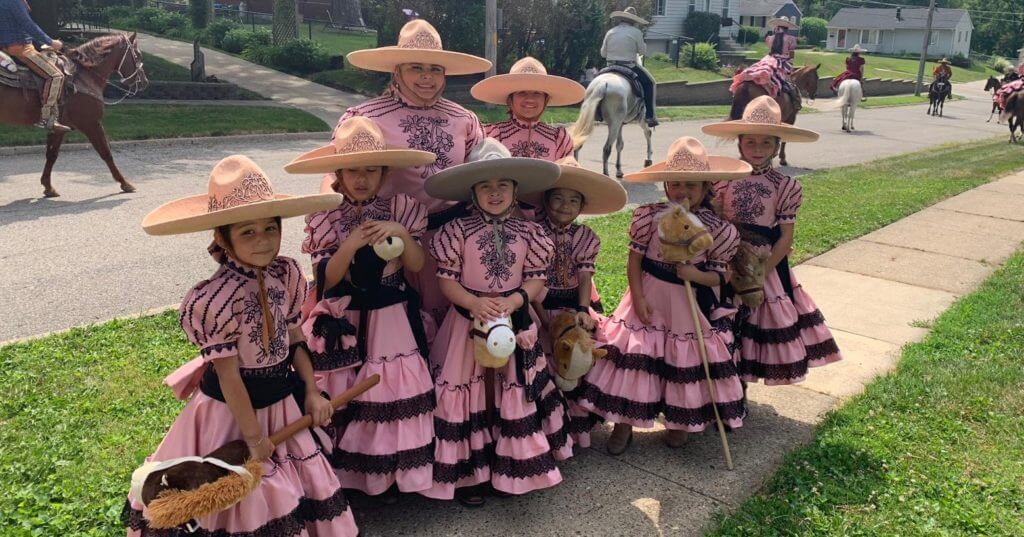 “The Escaramuzas are the flower that gives color to the Charros,” Martha added.