Hailing from a family of educators, the Democrat has spent the majority of her time as a working professional in the hospitality industry, with some experience at a steel fabrication company and as a campaign field organizer. Pellant is set to face off with former Iowa House Speaker Brent Siegrist this November, intent on fighting for the needs of educators, union members and those reliant on affordable healthcare — the same needs of herself and her family.

“My parents, retired teachers, live off their pensions and their Social Security. My sister is a teacher now … And she’s obviously very disappointed in the turn that things have taken in the last three years in terms of collective bargaining and education funding,” Pellant said in an interview with Iowa Starting Line.

“I just thought, you know, I can’t sit through another legislative session thinking that there might have been something that I could do to change this outcome for working families in Iowa. And so that really kind of made the decision for me [to run].”

Encompassing all but the west end of Council Bluffs, House District 16’s seat has been held by Rep. Mary Ann Hanusa since 2011. After a surprisingly close race for her fifth term in the House in 2018 against Democrat Steve Gorman, announced she would not be seeking reelection for a sixth. 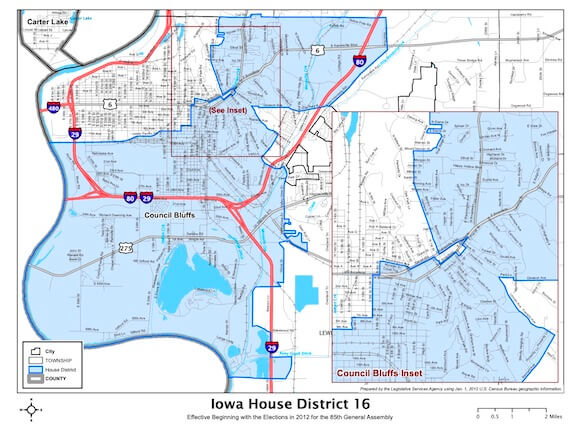 Siegrist, who ran against Steve King for Congress in 2002 and had an unsuccessful run for Council Bluffs mayor, became the sole GOP candidate for the seat he held from 1984 to 2002.

While Siegrist’s name recognition precedes him, the longtime Republican district has been leaning purple in recent years. President Donald Trump won the district by ten points in 2016, but in 2018, Hanusa only beat Gorman by a near-one percent margin. In the 2018 Governor’s race, Gov. Kim Reynolds only defeated Fred Hubbell by slightly more than two points here.

“I think that we’re basically in a virtual toss-up here, and we’re just working to get every vote that we can … And we’re hitting all of our marks. We’re meeting all of our metrics. We have a ton of volunteers helping us with our calls,” Pellant said.

The candidate also mentioned it doesn’t hurt that her parents are longtime beloved Council Bluffs community members. She said that “people are coming out of the woodwork,” in the community for her campaign.

“My parents are amazing. They were amazing teachers and they’re amazing people. And I know that there’s so much goodwill in this community that I owe entirely to them and not to myself,” she said.

With deep roots in the state, Pellant was born in Indianola, where her parents settled for a few years upon graduating from Simpson College. The family then moved to Council Bluffs — her mother taught 7th grade and her father taught high school English and coached football and basketball at Lewis Central Community Schools.

The candidate ended up attending Simpson College as an undergraduate, later receiving a law degree at the University of Iowa.

Pellant then left Iowa for Chicago, where she lived for a number of years. It was in Chicago where she found her footing not in law but in hospitality — Pellant joined a growing group of bars and restaurants where she helped with management, fundraising, event planning and marketing.

The candidate said her time in hospitality has prepared her most for running a campaign.

“I performed a lot of functions there. I was in management. I also did their public relations. I did their social media accounts. I did their website,” she said. “And [campaigns are] basically like running your own business.”

Pellant said that by the 2016 election, she had begun to stir feelings about moving back home. So when her father became sick in 2018, the candidate moved back to Council Bluffs and decided to make a career change — she was hired onto former presidential candidate John Delaney’s campaign as a field organizer.

“I knew there were going to be a ton of people in the field. I knew that there would be a number of them I’d be happy to work for. But he happened to be the first person hiring on the ground in my hometown, which is where I really wanted to organize,” Pellant said.

The now-candidate organized for the former Maryland Congressman until he dropped out of the race just a few days before the Feb. 3 Iowa caucus.

“Ultimately, he wasn’t the one that captured everyone’s imagination,” she said. “It was a great, great experience getting involved in campaigns.”

Though working on the Delaney campaign was her first formal experience with politics, Pellant said she’d always had an interest in public service. She recalls covering the Steak Fry for her college newspaper back in the 90s when Bill Clinton attended. Then, during law school, she began the still-functioning Journal of Gender, Race & Justice at the University of Iowa with a group of other politically active students.

But she really became interested in political candidacy after getting involved with the local Democratic Party and attending a number of legislative coffees in the district — where she felt there was a disconnect with what candidates were saying to constituents and their actions back in Des Moines.

“There was a huge disconnect between what they were talking about at the legislative coffees and what they were actually doing,” Pellant said. “Education, health care and a living wage and some rights in the workplace are things that are absolutely vital to have a functioning community for working families … This is a community of working families, and the policies of the last few years have not been good for them.”

After becoming more involved with local activists and becoming friends with 2018 candidate Steve Gorman, Pellant said her decision to run for the seat was solidified when Gorman announced his candidacy for Senate District 8.

“We were looking for somebody to really pick up the ball and run with it from where he had left off in 2018,” Pellant said. “I’m a coach’s kid and I just believe that life is a team sport. That’s the way that we were raised. And I just don’t see a lot of teamwork happening at the statehouse right now. And so that’s and that is to the detriment of working families in Iowa.”