On her last day of classes at Boise State University in 1998, Iowa House District 37 Democratic candidate Andrea Phillips rode her bike all the way up to campus before realizing she forgot her bike lock.

“I just turned to the person next to me in front of the business building and said, excuse me, do you have a 5:30-6:45 class? Can I lock my bike with yours? And that person is now my husband, Tom,” the Boise, Idaho native laughed. “We were kind of trying to impress each other. And so I told him I had just gotten back from living in Geneva, in Paris, and that next summer I wanted to go live in China.”

Phillips said her now-husband’s eyes widened—he said he was getting his MBA with an emphasis in international business and also wanted to live in China. So after they got married, the couple did move to Shanghai for 10 years before relocating to Iowa to give their two children “an all-American childhood.”

But her forgetfulness and a serendipitous mention of China wasn’t the only time fate worked in Phillips’ favor.

Healthcare and education, the main reasons Phillips moved back to the States, are issues paramount to the candidate—whose 15-year-old son has mild cerebral palsy requiring extensive physical therapy and for a time, occupational therapy. As luck would have it, those are the topics Phillips has been hearing suburban constituents are most concerned with during campaign phone calls ahead of November’s election.

The former businesswoman and stay-at-home mother who is making another run for Ankeny’s House District 37 might have destiny on her side this cycle as she’s campaigning on those key issues as a candidate with a background working in diverse situations amid a time of favorable electoral politics for Democrats in suburban seats.

Phillips came 15 points short of defeating incumbent Republican John Landon in 2016, but now her rematch four years later is seen as one of Democrats’ best pick-up opportunities in the state.

“I mean, if I were hearing something different, I would try to figure out what are the best policy ways to address those issues. But [healthcare and education] do seem to be the issues that are most pressing for people … Honestly, it’s education and health care almost every time, really,” Phillips said.

“I think it’s safe to say that this is one of the top targeted seats in the state … [This year is different than 2016 because] a lot of people believe it’s a winnable seat. I absolutely think that we can win this year if we just keep our heads down and keep talking to voters.”

House District 37, which includes the north half of Ankeny and Alleman in northern Polk County, could in 2020 be one more Des Moines suburban district added to a growing number of House seats flipped blue from GOP-control. Democrats won five Des Moines-area suburban districts held by Republicans in 2018. 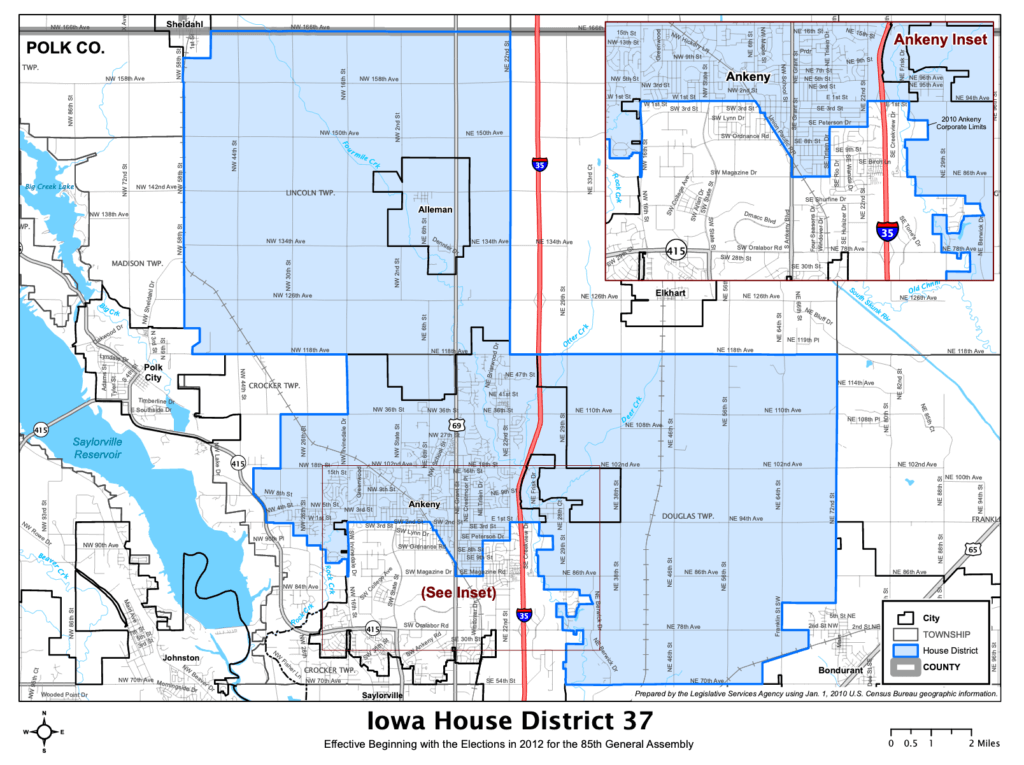 The once solidly-red district has been drifting further left. In 2012 the suburban area voted for Mitt Romney over Barack Obama by about around 12%. In 2016 the margin became smaller as they voted for Donald Trump over Hillary Clinton by about 8%. Current Republican Gov. Kim Reynolds only beat Democrat Fred Hubbell in 2018 by about 3%.

Phillips, who has lived in Ankeny for the last ten years and who was until last year the first vice-chair of the Iowa Democratic Party, said she became involved in politics in 2015 by volunteering for Clinton’s presidential campaign.

At that point, her daughter was in school full time, but the Ankeny mom still wanted to stay at home to coordinate her son’s care. With more time on her hands, Phillips mentioned to Democrats in the district that she wanted to help local candidates win after the caucuses.

“Somebody emailed me and said, actually, there is no Democrat running for the Iowa House in your district. I think you should do it. And I had been getting more and more upset with what I saw happening in the state legislature, which was why I had wanted to get involved as a volunteer,” Phillips said.

The combination of frustration over education funding cuts at the Statehouse and chaotic national politics eventually led to Phillips’ decision to run, which she said came to a head one night while watching the news with her husband.

“My husband turned to me and he said, ‘it’s like Rome is burning.’ I thought, you know, he’s right. This is it. This is the moment where you have to stand up and say, enough is enough. I have to do something different. I have to put my life on the line and do as much as I can in the best way that I know how to make a difference. And so for me, that was running for office,” Phillips said.

Moving from campaign volunteer to House candidate and vice-chair of the Iowa Democratic Party wasn’t the only time Phillips quickly rose ranks.

In China, Phillips was the director for a multinational marketing company that ran medical and dental clinics—she got the job by blindly passing out resumes after moving to Shanghai for her husband’s job. She landed one, and her boss then encouraged her to join the marketing committee for the American Chamber of Commerce in Shanghai. From there she created a market research subcommittee, was the chair of the marketing committee and was finally the youngest person ever elected to serve on the board of governors of the chamber.

Phillips said she wants to work across the aisle in the Statehouse for HD 37 like she did when she was on the board of the chamber—where she said she was frequently one or the only one of a couple of women in board rooms and often the only liberal in rooms full of conservatives. The candidate said that when working with people in international circles, agreeing in the constructs of different worldviews was sometimes difficult, but doable.

“I really had to learn how to sit down across the table from someone who was very different from me, had a very different world view, a different way of looking at things and boil. Both of our arguments down to the bottom line and find common ground so that we could accomplish our goals,” she said.

Phillips said she wanted to focus the board more on corporate social responsibility, but got a lot of pushback from older, more conservative board members who were the head of Asia for companies like Coca-Cola and GM.

“I’m really proud of what we accomplished at the chamber. I mean, we changed. They changed it to be called corporate social responsibility. We established a vetting program for local nonprofits. We established the Corporate Social Responsibility Awards every year. And that project actually came in the top three worldwide among all of the chambers in the world,” she said. “And that’s the kind of commitment that I would bring to the state house … we’re going to have to work together to get things done.”