As sustained protests have swept Iowa and the nation in the wake of George Floyd’s murder, one major idea that activists have pushed is that of defunding the police. The notion has many possible iterations, but the goal is generally to reimagine policing itself and shift local budget allocations away from police departments to other efforts, like social services and intervention programs.

Where could that conversation begin in Iowa? Simply understanding how much of many major Iowa cities’ budgets are dedicated to their police department is a good place to start. The percentage of the overall local budgets they consume may be surprising.

Iowa Starting Line took a look at the most recent data from operating budgets in five Iowa cities — Des Moines, Cedar Rapids, Iowa City, Davenport and West Des Moines. All fund their police with general funds notably more than any other division. Fire, Parks and Recreation or Public Works Departments usually see the next highest priority, while civil rights or human services are further down the list.

Cities with large African American populations, like Des Moines and Davenport, spend the most on their police departments, while cities with smaller black populations like Iowa City and West Des Moines spent the least of these selected cities.

The reviewed cities spend around one percent of their general fund budget on Civil or Human Rights Departments. All five cities spend minimally on development services departments.

In its review of police funding, Iowa Starting Line reviewed only general fund allocations of these five cities, where general service departments are mostly backed — though they also can be supported by capital project funds, special revenue streams or other sources. This review attempts to look at police spending generally, not comprehensively.

According to the State Data Center for Iowa and the Iowa Commission on the Status of African Americans, Des Moines has the largest African American population in the state by household, followed by Davenport, Waterloo, Cedar Rapids and Iowa City. West Des Moines’ black population is significantly lower.

The Iowan city with the third-largest African American population by household is Waterloo — it is left out of this review because the city’s budget doesn’t itemize their public safety spending with breakouts for the police department, though the division gets over half of its over $60 million general fund.

Here are the toplines, with a more detailed city-by-city breakout below: 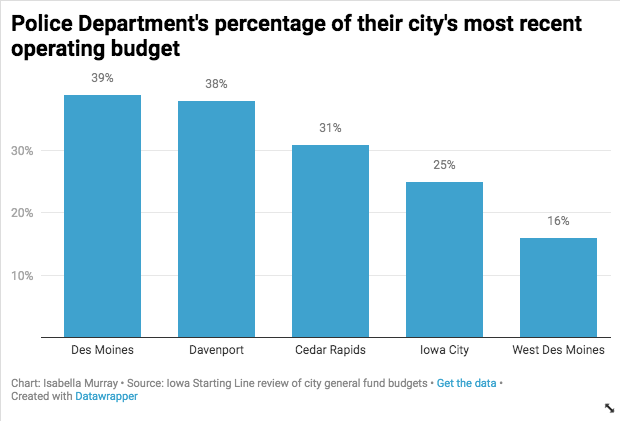 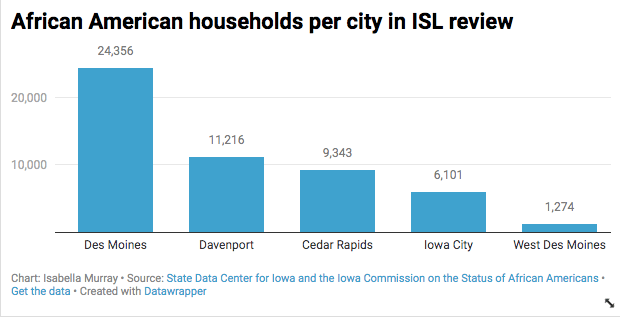 Des Moines spends 39% of its current general fund budget on law enforcement, more than any of the other cities on this list. The city had a $181 million general fund budget for the 2019-20 fiscal year. It also has the largest African American population in the state, with 24,356 households from 2014-2018. 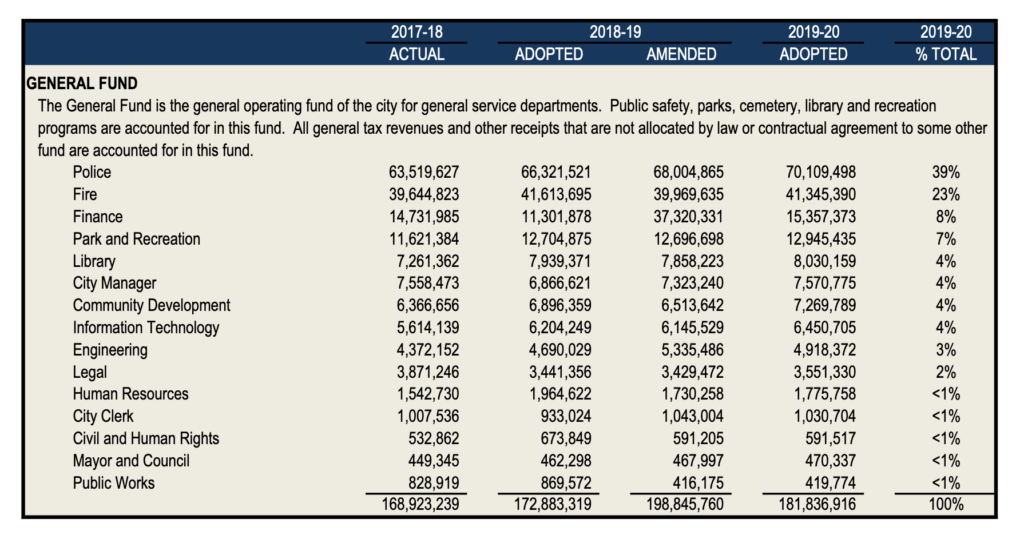 The city’s second financial priority is the fire department, getting 23% of the general fund budget. Finance is next, receiving 8%.

In Des Moines, the civil and human rights department sees less than 1% of the general fund budget, while the community development department gets 4%.

Des Moines has also had Iowa’s largest protests in the wake of Floyd’s murder, with thousands gathered for over ten days around the State Capitol, downtown and the suburbs. The Black Lives Matter Des Moines organization on Monday held a picnic in Union Park to “imagine a future without police in our community.”

The second-largest African American population by household in Iowa is Davenport, with 11,216 from 2014-2018. The city also spent the second-most on police of these cities — 38% of Davenport’s nearly $50 million general fund was used for law enforcement. Less than 1% is used on the Civil Rights Department. 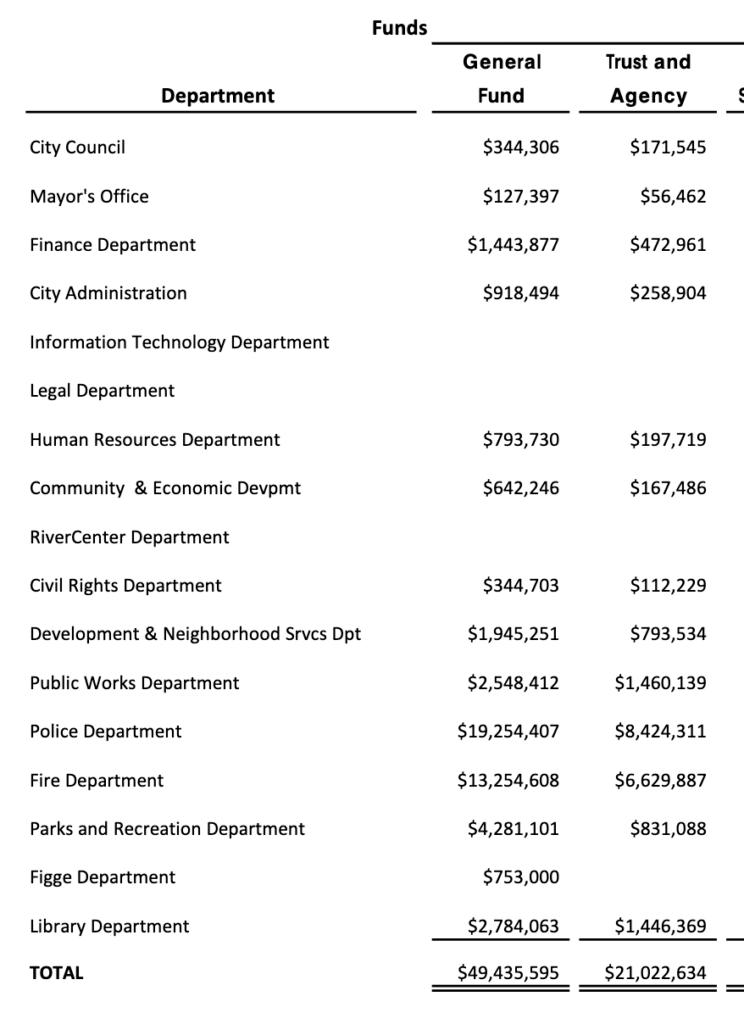 Public safety allocations remains Davenport’s highest priority, according to city documents, with police and fire employees accounting for over 71% of all salaries paid by the general fund. For fiscal year 2021, 89% of the Police Department’s budget was dedicated to employee expenses.

Davenport’s Fire Department saw 26% of the city’s budget, followed by Parks and Recreation at 8%.

Thirty-one percent of Cedar Rapids’ budget goes to their police, while Public Works sees 17% of the allocations and the Fire Department gets 15%.

Cedar Rapids has the fourth-highest black population by household in the state and is the second-largest city by population. Its general fund budget is around $140 million. Less than 1% goes to the city’s Civil Rights Department and Development Services sees 1% of the money.

Black Lives Matter Cedar Rapids’ priorities are centered around police reform. Among the requests is an ask for “significant investments to diversity, equity and inclusion.”

Other large parts of the college town’s nearly-$60 million budget goes to Parks and Recreation at 15% and the Fire Department at 14%. 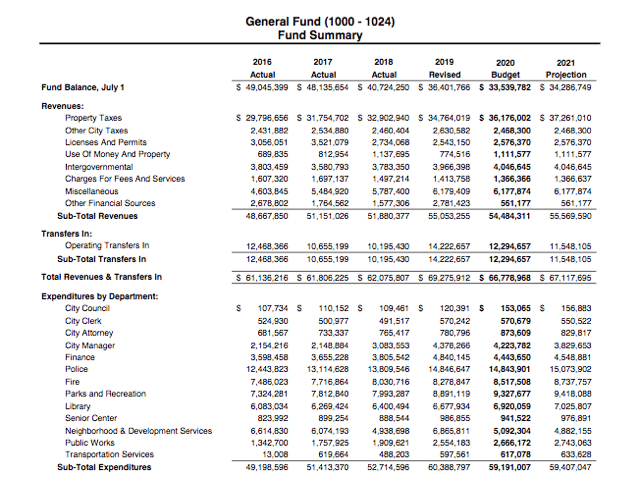 In Iowa City, a local group of activists who organized the downtown protests call themselves the Iowa Freedom Riders. On Saturday they published a list of 13 demands made in the name of “the citizens of Iowa City,” which included a 25% cut in the Iowa City Police Department budget, with that money redirected to social services. At the protest on the Pentacrest on Saturday night, group leaders also presented their 13 demands to local officials.

“There is sympathy for protesters’ concerns about policing and racial justice among Iowa City’s leadership,” said Iowa Freedom Riders in an Instagram post. “Rather than allowing leadership to frame the conversation with demands that would corral protesters into city sanctioned spaces and activities, protesters are framing the conversation preemptively by presenting the fulfillment of our demands as a condition of our willingness.”

Iowa City spends about 13% of its budget on Neighborhood and Development Services.

The smallest of the five Iowa cities reviewed by Iowa Starting Line, this suburban community has a much smaller African American population. West Des Moines has a general fund budget of around $75 million for the 2020-21 fiscal year.

Police receive over 16% of the budget, followed by public services or public works, at around 15% and the fire department at over 13%. The Human Rights Commission gets less than 1%, but Development Services sees around 3% of the allocations.