As the coronavirus continues to spread across the country, it is interesting to look at some of Iowa’s neighboring states to see how the case numbers and responses compare. Gov. Kim Reynolds reported today that Iowa has a total of 1,388 cases in the state, which comes out to just over 4 cases per 10,000 people.

The graph below shows how that per population rate compares with other states in the region and how that number has grown over time.

In the graph above we omitted Illinois, so you can more easily see the differences between the states that are closer together. When we add that state in, which is experiencing a large outbreak, it shows that they have a significantly higher rate of cases per capita than states just west and north of them.

While Iowa seems to be right in the middle of its neighbors, the per capita numbers are dependent on testing right now. There have been large discrepancies in the number of tests between the states, and with more tests, more cases can be properly identified and managed. The graph below shows the differences in testing, and demonstrates how Iowa and Nebraska are falling behind their neighbors in the number of tests done per resident. Without adequately testing the population, there is no way to fully identify the amount of cases, and thus help stop the spread of the virus. 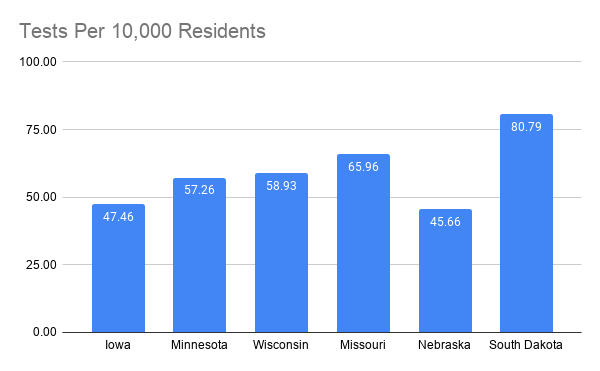 Another interesting comparison between states is to look at the difference between Iowa and its neighbor to the north, Minnesota. Minnesota has taken aggressive mitigation measures and Gov. Tim Walz announced a stay at home order on March 25, which went into effect on March 27. This order not only closed all bars and restaurants, but directed all Minnesotans who were not necessary personnel to stay at home. Some have also argued that simply issuing such an order also has an impact on people’s behavior, driving home the seriousness.

Reynolds in Iowa has resisted calls to issue a similar order, despite many state legislators and the Iowa Board of Medicine requesting a shelter in place directive. Reynolds claims that the guidelines that she has already enumerated, including the closure of bars and restaurants, will do enough to protect the state from the threat of COVID-19 and is similar to other states’ stay-at-home orders.

However, when comparing the numbers between Iowa and Minnesota, it seems for now at least that Minnesota is performing better on a per capita basis. Iowa also surpassed Minnesota in raw number of positive cases yesterday, and extended that gap today.

When viewing the graph below, it shows how the curve of Iowa cases per capita continued to increase at a more rapid pace than Minnesota’s, with the lines diverging just after the stay-at-home order. Although most mitigation efforts take some time to show results, it’s still interesting the states went on different paths so soon after.

In this graph, we’re showing the day Walz announced the order. It went into place two days later, but we felt the psychological effect of a shelter-at-home order should be noted. If you disagree, simply imagine the line two days later.

If the Minnesota example is instructive of how a stay-at-home order can help prevent the spread of a deadly virus, then Gov. Reynolds should seriously consider implementing an order similar to the one in Minnesota. While she has taken some positive steps towards minimizing the impact of the virus on the state, many businesses are requiring their employees to come into work, and some factories still have crowded parking lots. Some of those workplaces would still get deemed essential, but some would not, and every reduction of interaction right now helps.

Iowa does have a similar number of cases per capita as its neighbors, save for Illinois, but with the lack of widespread testing, and no shelter in place order like the one in Minnesota, the coronavirus still continues to pose a risk to people across the state.