Please check out our Iowa COVID-19 Timeline for an up-to-date count of cases in the state and other bits of news about Iowa’s response to the coronavirus pandemic.

Iowans may look back and remember today as the great St. Patrick’s Day shut-down.

After recommending Sunday evening that schools in Iowa shutter for at least four weeks, this morning Gov. Kim Reynolds ordered the closure of all restaurants and bars by noon today (carry-out orders were still permitted). In a sweeping proclamation that will rearrange public life in Iowa for the foreseeable future, the Governor took significant steps aimed at halting the spread of the coronavirus, for which 23 Iowans have already tested positive.

Casinos, theaters, fitness facilities, and senior citizen community centers were also mandated to close down, and the gathering of more than ten people for any number of social reasons was outlawed.

Reynolds’ decision was a sharp reversal from her press conference the afternoon before, where she did not recommend bars and restaurants shut down.

The new announcement was made a little before 10:30 a.m., giving most businesses less than two hours to take in the news, which came on what would in other years had been a busy time on St. Patrick’s Day.

In Des Moines’ East Village, news of the mandate spread swiftly. Many restaurants simply didn’t open at 11:00 a.m., while employees at coffee shops said they had to quickly figure out what to do with the food they were already in the middle of baking.

A cook at Quinton’s on Grand Ave. exited the closed bar, uncertain of his future.

“We kind of saw it coming, but we’re still not that happy about it,” he said. “I care more about my community than I do about my paycheck … but I worry is this going to be two weeks or six months?”

Just how long this disruption to daily life goes on is uncertain. There may be good news out of Italy today, which had gone on a nationwide lock-down, as it appeared their daily death rate had finally started to level off. But there’s also concern that the COVID-19 outbreak could come in several waves, even if initial spread can be mitigated.

Throughout Iowa, in communities large and small, there was both frustration and understanding, as well as an unease over where daily life now goes.

In Boone, residents were proceeding as normal as they shopped downtown, deposited checks at the bank, or went on walks with their families.

“People are just kind of trying to prepare and at the same time keep cool and work,” said Greg Piklapp, a Boone City Council member. 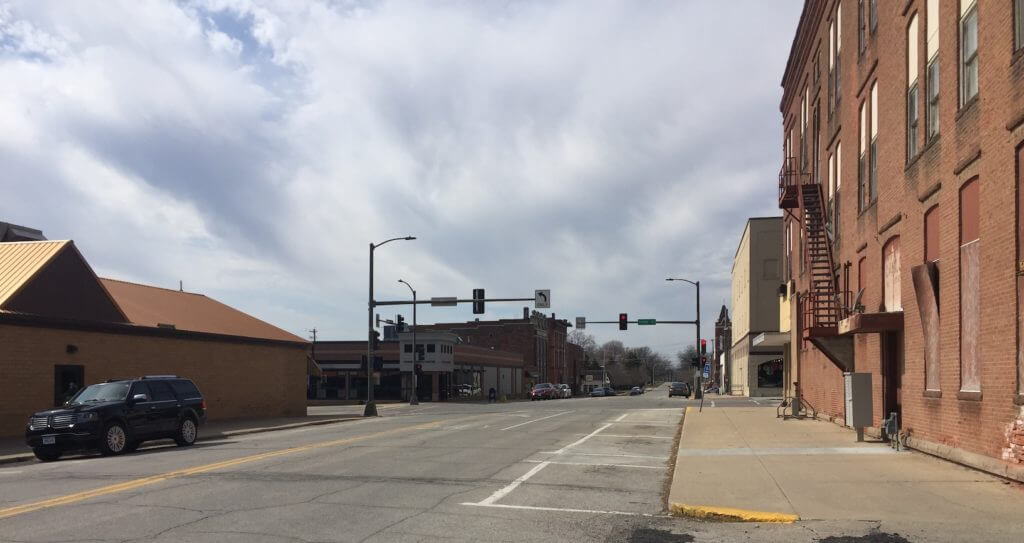 But while residents tried to continue their previously scheduled activities, the changes in routines were being noticed by residents.

“I notice it every day because I am a half block away from the school,” said Harley Young, a Boone resident. “I am used to the kids every time I go outside. It’s something weird, not hearing the kids this time of year.”

Young sat perched on a ledge outside of the closed Boone library, and opined with a groan that the virus was being “blown out of proportion,” but that the Governor’s decision to close bars and restaurants was a good idea.

The new orders from Reynolds were certainly being felt by local small business owners in Boone, like Teri Van Hemert, the owner of Van Hemert’s Dutch Oven Bakery. There was still a smattering of customers wandering in to buy cookies, Dutch letters, and coffee, but the usually busy indoor seating section was only populated by stacks of chairs.

“We have seen a huge decrease,” Van Hemert said. “I think people are just staying away, trying to stay at home, which they should do. But as a small business owner … it’s a trickle down effect. It’s affecting everyone.”

While dine-in service is now banned, many restaurants are encouraging carry-out orders to help keep their businesses running.

“A lot of people thought that we were just closed,” Van Hemert said. “So we are trying to get the word out that it’s takeout and curbside.” 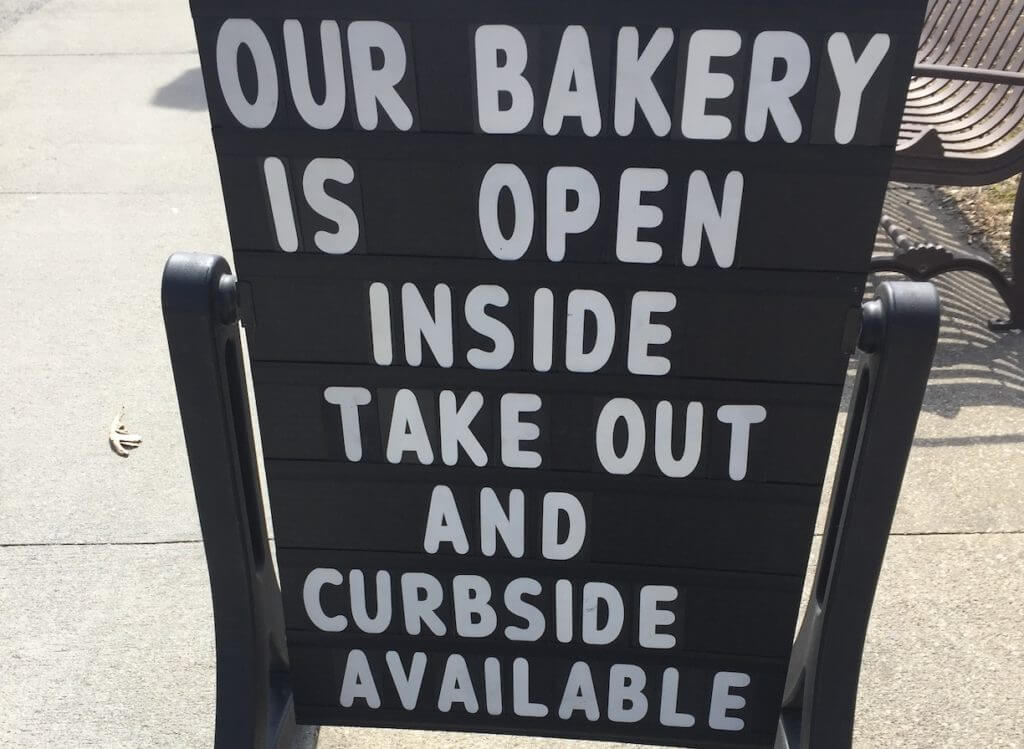 With the decrease in patronage and out of caution for the health of her employees, Van Hemert has cut down to a “skeleton staff” and is just hoping to “ride it out and hope for the best”.

In Ames, most of the downtown strip of businesses had various signs up stating their closure over COVID-19. A few people still roamed the streets regardless.

At Iowa State University’s campus, people had already adjusted to dramatic changes. Over a week before Reynolds and state health officials turned to stricter measures, most Iowa colleges, including the regents universities, decided to move to online-only courses. Some are shutting down their campuses entirely. ISU was already in the midst of spring break this week, but the campus was even more of ghost town today than it would have been, several people who remained noted.

Amelia Taylor, 20, a sophomore at ISU, sat with a friend outside a nearly-deserted Memorial Union.

“I’m in a lot of group-related classes and music classes,” Taylor, who plays bass guitar in jazz band, said of her semester. “We just have to practice on our own, because you can’t really do it over video.”

She and several of her friends are sticking around the Ames area, continuing to live in their apartments by campus. Taylor still bounces back and forth to her parents’ home in Norwalk. Many of the freshman she knows have gone home for the semester, and her friends at other private schools have largely returned to their home towns as well.

While the classes shifting online has changed how students are studying, they’re also missing out on months more of young friendships.

“You come to college for the learning experience, but it’s also the social experience. That kind of sucks because it’s harder to see your friends now,” Taylor said. “You don’t want to miss out on the memories you could have had.”

And while she’s still finding occasional times to leave her apartment, she’s not taking many chances of who she interacts with as the virus spreads.

“It’s scary,” Taylor explained. “You don’t want to get sick and accidentally pass it to your grandparents. That’s my worse fear: getting someone else sick. I think I’ll be fine, but the older population is at risk.”

In Burlington, about 80 miles southeast of Johnson County, where a majority of Iowa’s coronavirus cases are located, Tuesday seemed almost like a Saturday afternoon in the summer rather than a weekday in March.

It was only about 50 degrees there today, but the sun was shining and people were mowing their lawn, walking dogs and playing outside.

Empty parking lots at restaurants, bars and schools was the main sign that something was off.

Chase Gibb, a Burlington businessman with two restaurants in Burlington and one in Fort Madison, expressed his frustration on Facebook with the short notice about no dine-in customers at restaurants and bars.

In Fort Madison, Sharon Horan and Bobbi Jo Willis also lamented the governor’s timing. Horan and her daughter own and operate Horan’s Cabaret, an Irish-themed pub in business for more than 45 years.

An electronic Guiness sign on the wall of the small bar counts down the days, hours, minutes and seconds until St. Patrick’s Day.

“I’m posting with a very heavy heart today. As of noon we closed our doors,” the pair said on Facebook. “This could not have happened at a worse time for us, on our biggest day of the year. I mean, we get it, but we waited until after 5:00 last night to prepare our hundreds of pounds of food because our governor said that she was leaving it to the bars/restaurants to make their own decisions.”

In Van Buren County, a small community of villages that boast no chain restaurants, Misty’s Malt Shop in Keosaqua served customers through its take-out window.

Two bright pink signs on the front door read: “We are open! Just place orders @ side window or call 319.293.3815. Dining Room is closed until further notice due to Gov. Reynolds! Window orders are still available! Sorry!!!”

Brad Willet and his two young children, Adi and Jak, each walked away from the counter with a small vanilla ice cream cone.

The Van Buren Community School District canceled school today and Wednesday, with the board of directors meeting tonight to determine how long to stay closed.

“Luckily, my job is seasonal,” Willet said. “So, it’s not a problem for me to be home with the kids right now. I know I’m one of the lucky ones as far as that goes.”

Because no cases of COVID-19 have hit Southeast Iowa, Willet said the threat of illness felt far away, but that was no reason not to take it seriously.

“I’ve heard people say that if three months from now we look back at all this and think we overreacted, then we probably did the right thing,” he said. “I’d rather be safe than sorry. Hopefully we’re taking the right precautions now so this doesn’t drag on forever.”

Although businesses across the state are struggling to cope with the effects of the virus, there has been significant community involvement to help those in need.

“I am seeing a lot of positives in my community,” said Piklapp, the Boone council member, referring to how residents have been using social media to help others find supplies like toilet paper or to deliver meals to the elderly. The Boone School Board will also be able to provide curbside pick-up for breakfasts and lunches for all students under the age of 18. While this option will be provided, school board member Pam Nystrom has had to remind parents that these resources are available.

“Parents will have to step up a little bit,” she said. “They are going to have to make an effort to get there, but there will be things available.”

Today’s events had dramatic and swift impacts on Iowa, ones that everyone hopes will also have a significant impact on the coronavirus’ spread. But the ripple effects will also be long felt, as workers at many of the businesses now shutting down try to figure out how to make ends meet if their paychecks are diminished or gone entirely for some time.

10 Comments on "Iowa Shuts Down"