A sisterhood of Yang supporters spent Sunday morning in Davenport wearing last night’s makeup and subdued hair curls, laughing in pajamas around their kitchen island between sips of coffee and bites of homemade strawberry shortcake.

They’re a group of women (plus a few men), ranging in age from 19 to 71 from cities across the country, living together for a few weeks in a large refurbished Victorian home in the city’s Gold Coast neighborhood. But rather than being linked to any college, their chapter is dedicated to electing Andrew Yang.

The “Sorority of Yang” had a big evening the night before at the Scott County Democrats’ Red, White & Blue Gala. They met Yang’s wife, Evelyn, who spoke at the event, and received some exciting news: their candidate had, overnight, qualified for the February debate in New Hampshire after polling at 7% in an ABC News national poll.

“I woke everybody up at like 7 this morning, yelling ‘Andrew Yang made the next debate!’” said Dani Hernandez, a 35-year-old financial technology consultant from Chicago. “But it’s like, I knew that was going to happen.” 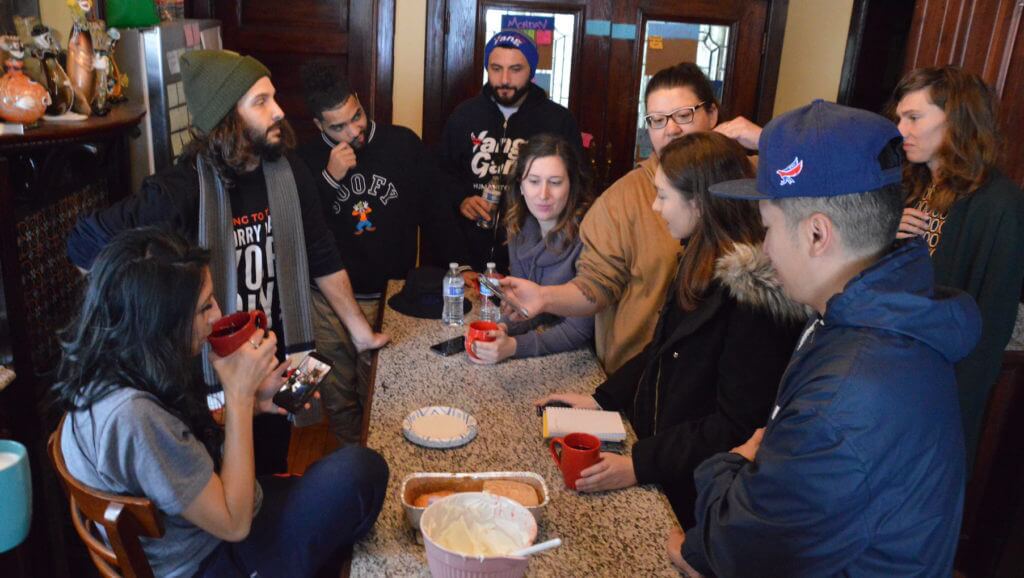 Something shifted, Jay Delarosa said, after Yang’s appearance in the November debate. Other house members agreed: they felt their candidate quickly moving from the fringe of the 2020 campaign trail to the fray, both online and now on the ground in Iowa with less than a week until caucus day.

“At first, people are like, you’re doing all this for a fringe candidate?” Delarosa, 22, from Brooklyn, New York, said. “And now it’s changed. I see it in my social media and in my personal life … He has overnight momentum. We’re going to shock the world on caucus night.”

The Sorority of Yang has become a sort of nucleus of out-of-state Yang volunteers who live in a microcosm of what they think Yang’s America would be like. Contribution to the house depends on individual strengths — Hernandez hates door-knocking, for example, so she focuses on organizing the logistics of the house. She has the skill set from the finance job at Freddie Mac she left in August, because she said it wasn’t fulfilling.

Other members cook, others create Yang “swag,” or art, and some promote their efforts online. Most of them knock doors as volunteers off of campaign lists. 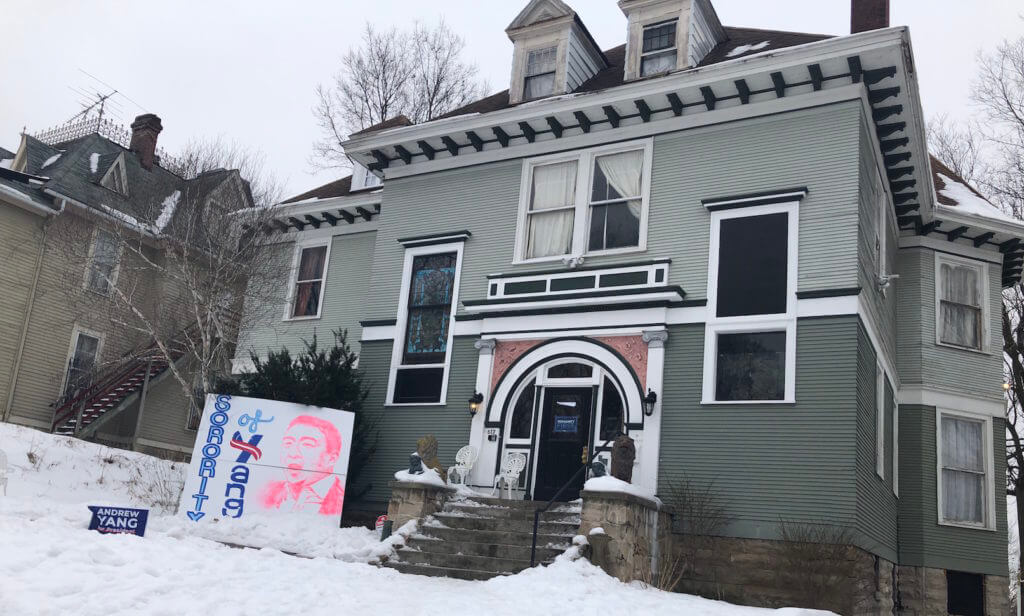 In the home’s front room are walk packets ready to go out, two big homemade MATH (Make America Think Harder) hats sized for cars, packs of Universal Basic Income card games, and in front of the home stands a mural of Yang. False $100 bills with Yang’s face on them hang from the crystal chandelier in their dining room. SOY, how the group affectionately refers to themselves, has a team of canvassers, artists, videographers and those who organize events.

“It’s almost like an art collective in addition to canvassers. We have a lot of live streamers here, and photographers and painters,” said Christina Lee Shane, a 37-year-old farming consultant from San Antonio, Texas. “So, it’s like everyone is able to contribute their own talents in our own individual way. It’s like we’re treating everybody like, play to your strengths as a human being. Because not everybody is good at everything.”

Also part of the crew is a neighborhood cat — nicknamed UBMeow who now has his own Twitter account — that routinely sneaks into the house and has to be ushered back out. 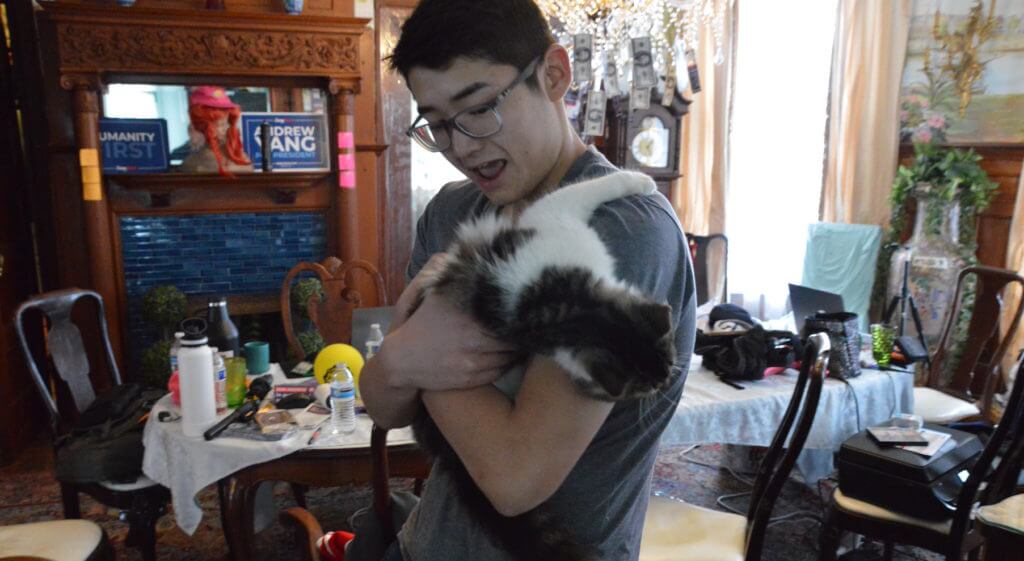 Setting Up Base Camp In A Victorian Home

There will be 60 people from places including Los Angeles, New York, Florida, San Antonio, Seattle, Chicago, the Bay Area, Brooklyn, Minneapolis, Washington, D.C., and Portland, who came through the house by month’s end. None had previously spent long periods of time in Iowa and the group cannot caucus, though about five members are precinct captains and some have other leadership roles.

SOY’s inception began when Hernandez met Katy Kinsey on Twitter—many of the candidate’s supporters, known as the “Yang Gang,” interact largely through social media. Kinsey, a 28-year-old from Washington, D.C., works in the nuclear defense industry and was looking to spend around two weeks Iowa to canvas and volunteer ahead of the caucuses. Hernandez was game.

They found the house through VRBO, a vacation rental website. While the homeowner is a Republican Trump supporter, she was moved by the group’s subsequent “thank you” video and their dedication to raising money — so much so that she lowered the price of the home by nearly 50%. They pay only $300 per night for the sprawling home that can sleep dozens.

Hernandez and Kinsey only planned on renting the house for two weeks, but SOY’s popularity grew, growing online fundraising enough to keep afloat through the caucuses, with their eyes on Nevada post-Feb 3. 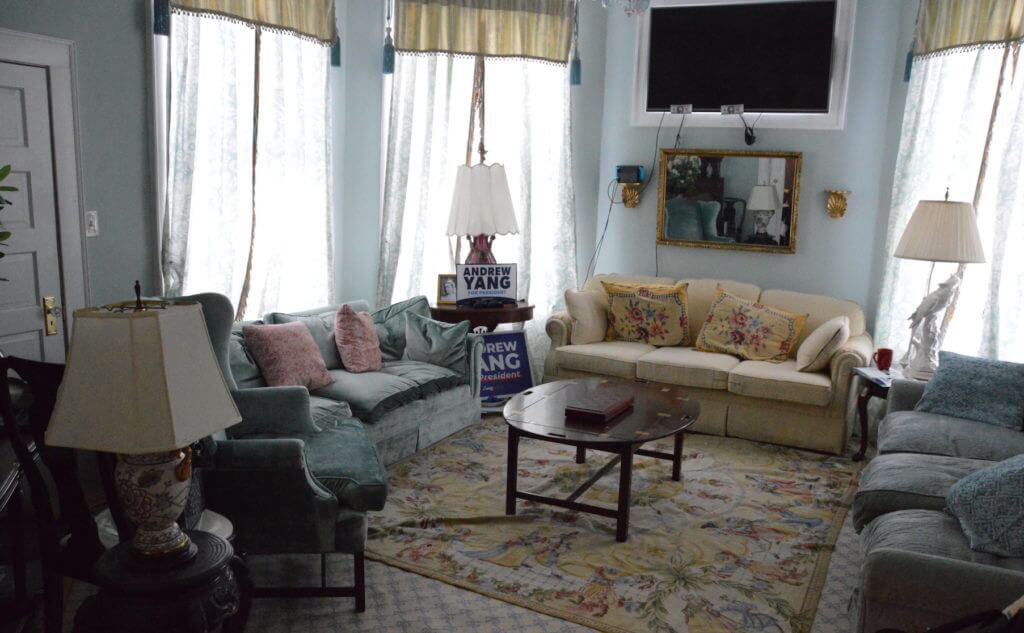 All rent, food and additional expenses are paid for by Yang Gang donors, Kinsey said, independent of the campaign to stay FEC compliant.

“The Yang Gang supports each other. We get presents all the time, actually. The Yang Gang sends us warm clothes, cookies. I got a discount on an Enterprise car, we get free photographers,” Kinsey said. 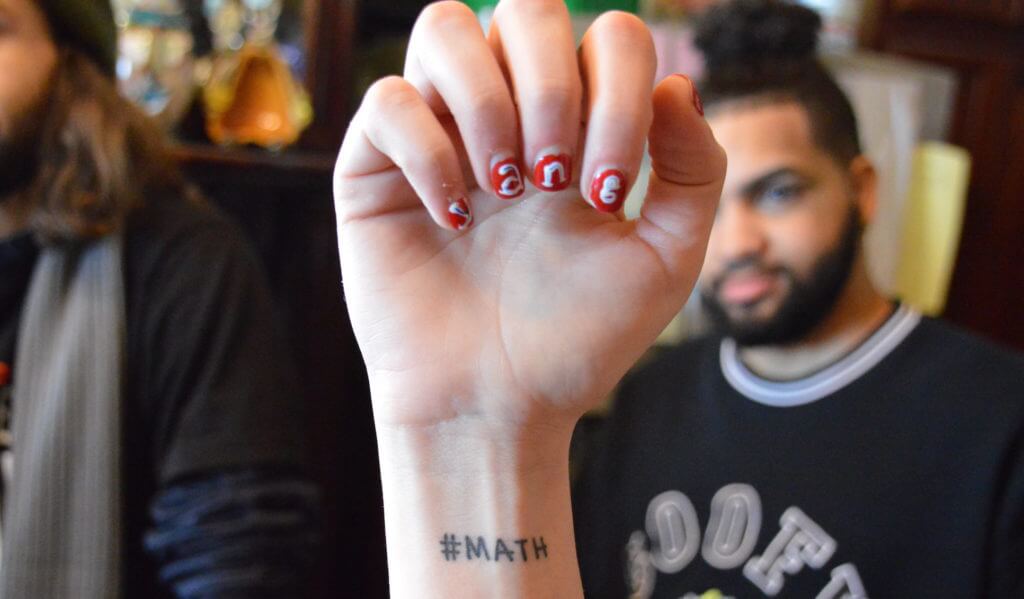 Delarosa said he wanted to join SOY so badly that he posted about it on Twitter and a fellow Yang Gang member gave him her Southwest airline miles to come out.

“It’s all the people who can’t be here that are supporting the people who can, using whatever resources. The thing about the Yang Gang is we have an abundance mindset. If you win, I win. Abundance attracts more abundance,” Lee Shane, the Texas farming consultant, said.

Gathering Support In All Spaces

What keeps the group’s morale so high is constant discussion of Yang and envisioning what their lives might be like under his presidency. While huddled around the kitchen, the group began naming off their favorite policies.

None mentioned the candidate’s most identifiable campaign promise: the “Freedom Dividend,” a form of Universal Basic Income where American adults receive monthly $1,000 payments from the government. Members of SOY agreed that while the UBI could allow the nation to take a “collective deep breath,” it was just a baseline for Yang’s further tweaks to the nation. 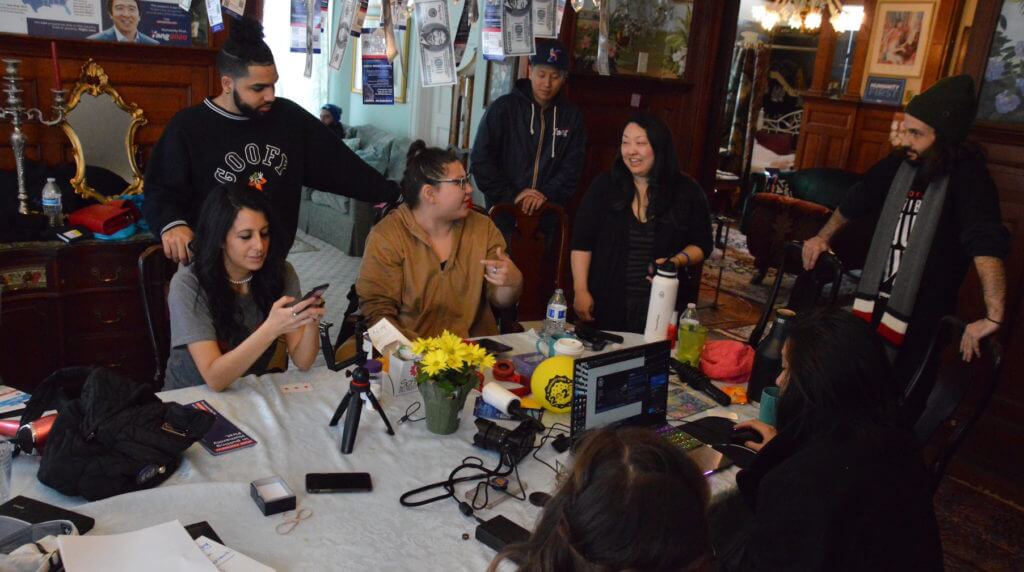 “In his stump speech, Andrew says that he wants to put the UBI as the floor. And you don’t stop building the house at the floor. The UBI is just a floor. But all of his other policies builds the house. And it’s a beautiful Victorian house,” Delarosa said.

Sorority members try to explain this on doorsteps around the state. Around 75% of the house spends most days out canvassing, where they said they’ve found that Pete Buttigieg and Elizabeth Warren voters are most open to consider converting to Yang.

“Every single Pete supporter that I meet —once we tell them about Andrew Yang’s policies — they realize that they like Pete for his values, but the values are reflected in Yang’s policies. So they end up like: ‘Wait, was I Yang Gang this whole time?’” Delarosa said. “Most people are Yang Gang but they don’t know it.” 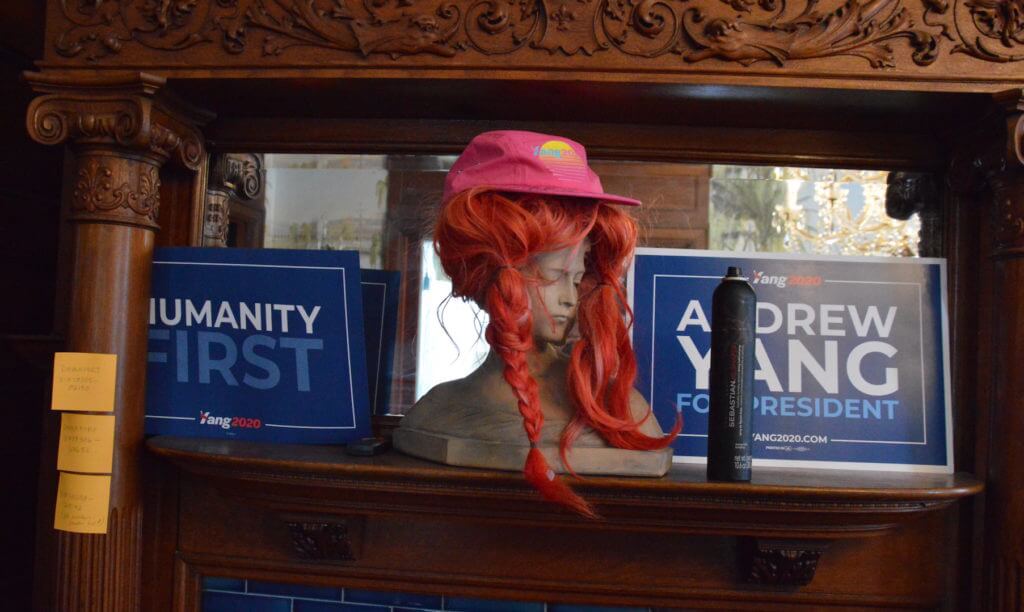 When canvassing, SOY said their hook is to try and “treat people like a human and not just a vote.”

“We know that Iowans probably deal with this every four years. It probably gets so exhausting. So our approach was not to be political. Our approach is, let’s be people. We’re normal people. We want to show humanity first. We’re all different in that it starts with conversation,” Lee Shane said.

They often have community members over to their home for “open houses,” frequent the local gay bar and volunteer around Davenport.

Davenport alderwoman Marion Meginnis and her husband Jack Haberman live in the neighborhood and have been to one of SOY’s open houses. They were consulted when the group wanted to find local volunteer opportunities. Haberman said they bring a “breath of fresh air” to the neighborhood.

“What we say about our neighborhood is, they’re the old homes,” Meginnis said. “We are the most diverse. In however you define it, we are. Whether it’s age, family type, income, politics, sexual orientation, race, we got it. It’s the perfect neighborhood for them and they fit in really perfectly.” 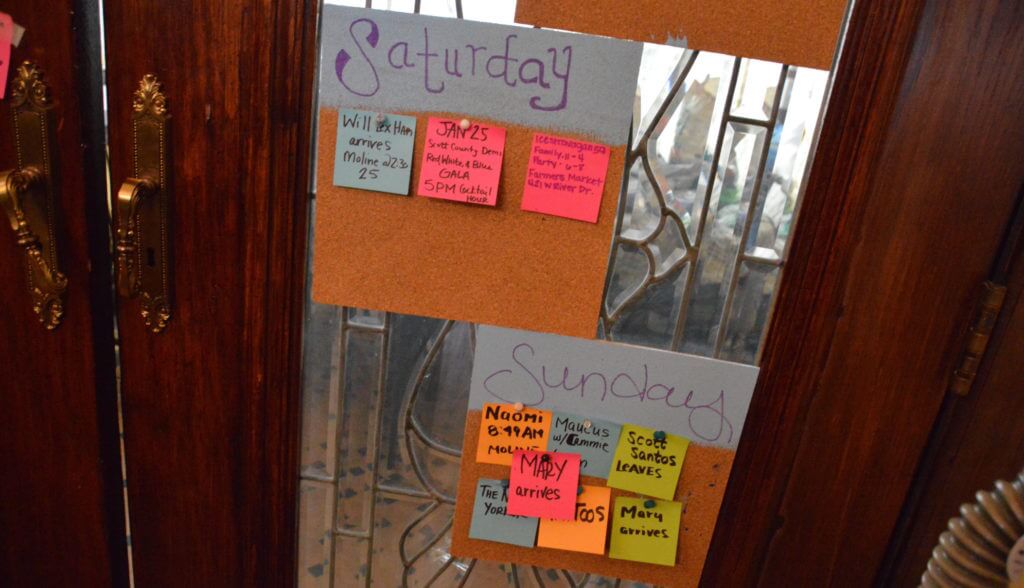 Hernandez recalled a night dancing on the bar at Mary’s On 2nd — a SOY favorite — when she met a man and his Republican husband. Hernandez was able to convince them both to caucus for Yang, and the Republican even changed his Facebook cover photo to show “Yang 2020.”

“So, it’s not just about what we’re doing for this campaign,” Lee Shane said. “It’s about creating a transformed society that we all want to see. So we’ve come together in Davenport, the Yang Gang, showing each other love, being humanity first. There’s a whole ethos to the Yang Gang, and then sharing that with the community that we’ve built in Davenport, with the locals.”

1 Comment on "The ‘Sorority of Yang’: Not Your Typical Out-Of-State Caucus Volunteers"