Iowa Democrats aren’t messing around when it comes to finding the perfect caucus locations this year. The party predicts turnout for the caucuses will be larger than ever, which means they went all-out on reserving large spaces in some of the state’s most populated and politically-active precincts.

The concourse of Wells Fargo Arena, Knapp Center at Drake University, the Holiday Inn Events Center in Ankeny and Des Moines University will all be used to host caucuses next Monday.

Plus, she said, some school districts are hosting basketball games and events on Feb 3 (Des Moines Public Schools, thankfully, is not).

Starting Line tagged along last week with precinct leader Brad Hopkins for a walk-through of Des Moines Precinct 38’s location at the Drake University Fieldhouse, where hundreds of people are expected to caucus. 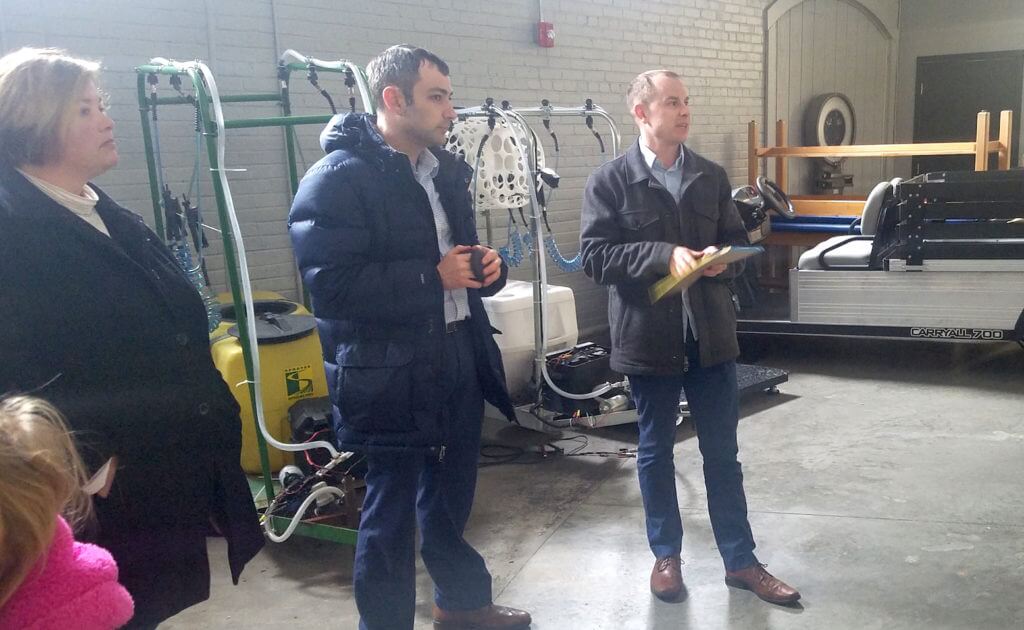 The first question that came up during the walk-through was whether the space was handicap accessible. It is, and the ADA accessible door will be different from the primary entrance, which means no one using that one will have to wait too long.

Drake will provide the chairs, which could come in handy in large precincts where caucuses take at least an hour.

Restroom accessibility is tricky here. The only women’s restrooms are up a flight of stairs, but there is another option; caucus-goers can use the facilities across the street at the Bell Center.

The second option, though, creates a new problem.

Hopkins decided it might be best for people to be told about the restroom situation before they’re allowed to check-in, so they don’t have to leave and come back once they’re in the door.

The next question: food and water. Food probably won’t be allowed in here.

Desserts sometimes are used to woo undecided caucus-goers, or those whose first-choice candidate wasn’t viable. But, the Drake Fieldhouse has a turf floor. Food won’t mix well with it.

Audio and video capabilities of the room were also discussed. Drake will provide a microphone system, but no video system. That’s fine, Hopkins decided.

Finally, Hopkins wondered what he’ll do on caucus night to accommodate media requests. CNN wants plenty of space to set up at the fieldhouse, he said. They’re bringing in some kind of camera equipment that needs to be set up high. The cameras apparently will be able to count how many people are in each candidate’s huddle in real-time based on the diameter of the circle they create — or something to that effect.

Luckily, there are two walkways inside the fieldhouse. CNN can probably have one to themselves.

NBC’s push for a drone, however, is likely to get rejected.

“We won’t let that happen,” Hopkins said, “because we’re in a building.”

The whole conversation only took about 30 minutes, representing one of 1,681 precincts that need to be organized across the state.

According to the chair of the Polk County Democrats, they have spent more than $22,000 this year on the large spaces and packet materials needed to prepare for this year’s caucuses.

The space will be needed, because in addition to an anticipated high voter turnout, there will need to be enough room to accommodate the variety of campaigns competing in Iowa.

“I think that the square footage per person is higher this year than it has been in the past because of the number of candidates,” Downs said. “I feel a little bit better about that today than I did six months ago.”

As for Hopkins, he said he’s “not overwhelmed yet.”

In fact, he seemed to be looking forward to caucus night at Des Moines’ 38th precinct.

“It’s interesting because it’s a college environment with people from the neighborhood, so it’s kind of an eclectic group of folks coming together,” Hopkins said. “It’s always a fun dynamic.”