As the importance of climate change climbs in the polls, a recent endorsement from the national Sunrise Movement might drive home Sen. Bernie Sanders’ new leading spot in Iowa.

At an Iowa City climate rally on Sunday, for the first time since the group’s Thursday announcement and his leading placement in the Jan. 10 Des Moines Register Iowa Poll, Sanders addressed what he and the Sunrise Movement might be able to accomplish together, including passing an ambitious Green New Deal.

“I so appreciate your endorsement for our presidential campaign,” Sanders said to members of the Sunrise Movement who attended the rally. “Working together, we are going to do something that is very radical; we are going to listen to scientists … and together, we’re going to pass a Green New Deal.”

“What the Sunrise Movement understands,” Sanders went on, “it’s not good enough to defeat Donald Trump … We go back to where we were, not good enough.”

The results of a survey of thousands of the group’s members found 76% voted in favor of Sanders. Sen. Elizabeth Warren got 17.4% of the vote, and the remainder was split mostly between Pete Buttigieg, Andrew Yang, and “no preference.”

“It will take a mass movement of millions of people to win a Green New Deal, and there is no other candidate … that can activate millions,” said Sunrise Movement co-founder and executive director Varshini Prakash, while she introduced the candidate. “I believe that having a president like Bernie Sanders in the Oval Office and building a movement of millions on the outside is our best shot at survival.”

Five Sunrise canvassers were circling the rally of about 910 people. Michaelyn Mankel, the Sunrise Movement’s deputy statewide director in Iowa, said they’ve focused on organizing on college campuses and with high school students this caucus season.

“I think this endorsement is also going to give us an exposure to a much broader movement, millions of more people who have been standing behind Bernie and who have been working for Bernie at a scale that our movement just hasn’t been able to reach,” Mankel said.

To endorse a candidate at local hubs, Sunrise national recommended two-thirds of voters must vote “yes” to even endorsing a candidate and more than 50% of the vote must go to one candidate.

At Sunrise’s most active Iowa hub, Cedar Rapids, Sanders got 62% of votes from 37 hub members, but the hub did not pass the two-thirds majority threshold for pushing a local endorsement. Warren received the second most amount of votes, while Sen. Cory Booker gathered the third most.

The hub said they released the data as a “helpful guide for undecided caucus-goers who are concerned about climate change.”

Consistency was among the top reasons Sunrise Movement’s members wanted to endorse Sanders. They pointed to him addressing climate change as early as the 1980s and focusing on climate during the 2016 primary elections.

The group also cites his responsiveness to social movements and new information and his political courage, among others, as reasons they’ve endorsed the candidate.

“I think a big reason our movement is choosing to stand behind Bernie Sanders is because he’s the only candidate who really understands movement politics, and has been supportive of people, power, movements, demanding change for longer than most of us have been alive,” Mankel said. “A lot of people recognize Bernie as the climate candidate, but overwhelmingly trust him more than anybody else.”

“With his track record and his consistency, I think that once he’s in office, we can trust him to not pivot to the middle. I think he’s going to fight,” said Stella Hart, 30, of Iowa City.

Congresswoman Rashida Tlaib of Michigan, a Sanders’ surrogate, also mentioned the candidate’s unwavering ideals, along with creating a better world for her children, when explaining her endorsement.

Celeste Edeker of Iowa City brought her 3-month-old daughter to the rally. She said she’s concerned about both the short and long term implications climate change poses on her new baby.

“It’s been really hot recently, which is nice, but not great for climate change. And then last year with the polar vortex. If it does, I can’t even take her out to go to daycare,” said Edeker, 24. “I’m hoping it’s won’t get serious that soon, but who knows, honestly … [Sanders is] hope for the future. I don’t think the other Democrats are spending that much time on climate change and focusing on it.” 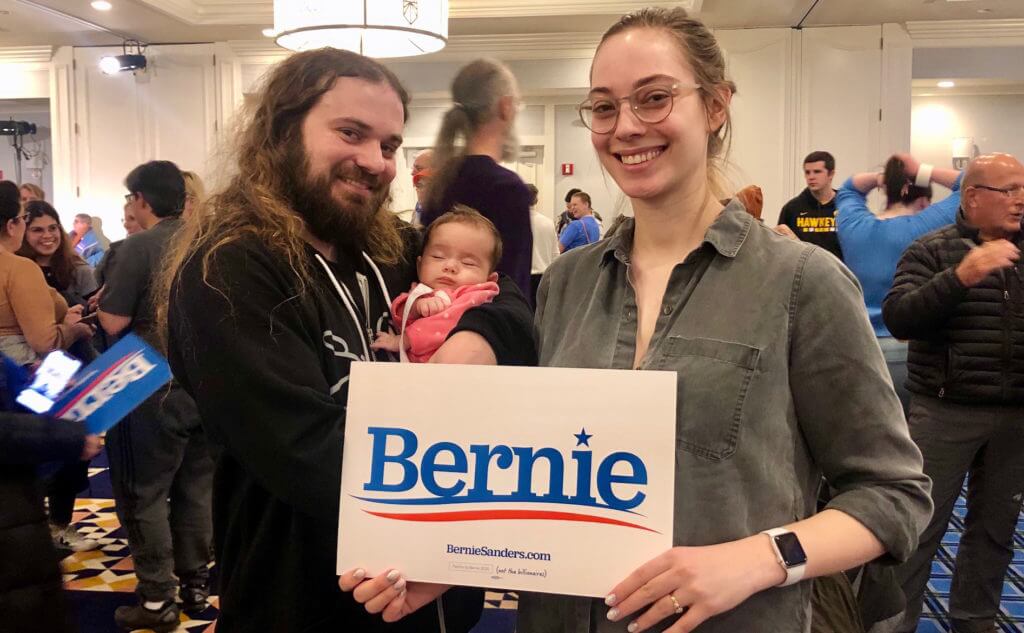 2 Comments on "Sunrise Endorsement Adds To Sanders’ Momentum In Iowa"