Last night, people around the country took to the streets to demand accountability for Donald J. Trump, the fourth president in history to face impeachment.

In Des Moines, hundreds of people gathered on the steps of the Iowa Capitol building with signs and chants. Protesters assembled in five other cities in Iowa, from Sioux City, Red Oak, Cedar Rapids, Iowa City and Davenport.

The rallies dispelled the idea that Iowans don’t care about impeachment. For some, they care because they’ve watched the case unfold since 2016, and they don’t want to see Trump get away with committing crimes.

“I’m tired of it. Tired of the constant, just the circus. It’s seems like nobody listens to facts,” said Kate Grim, a 31-year-old who lives in Des Moines. “Nobody wants to critically think about how this country runs, what a fair trial is. Expecting that a president is above the law and somehow he’s just king shit is unbelievable.”

Her husband, Britton, 35, said he works in a place where the news plays all the time, so he’s been plugged into the story of corruption since former FBI director James Comey testified in 2017.

Britton works in cyber security, so he said he’s familiar with the fact that Russians have hacked both political parties, but only released the information for one of them.

“I think that’s the reason to be out here when it’s freezing,” he said. “I mean, I am the laziest millennial ever. I can’t believe I’m even out here to be completely honest or that I spent my lunch break writing a sign.” 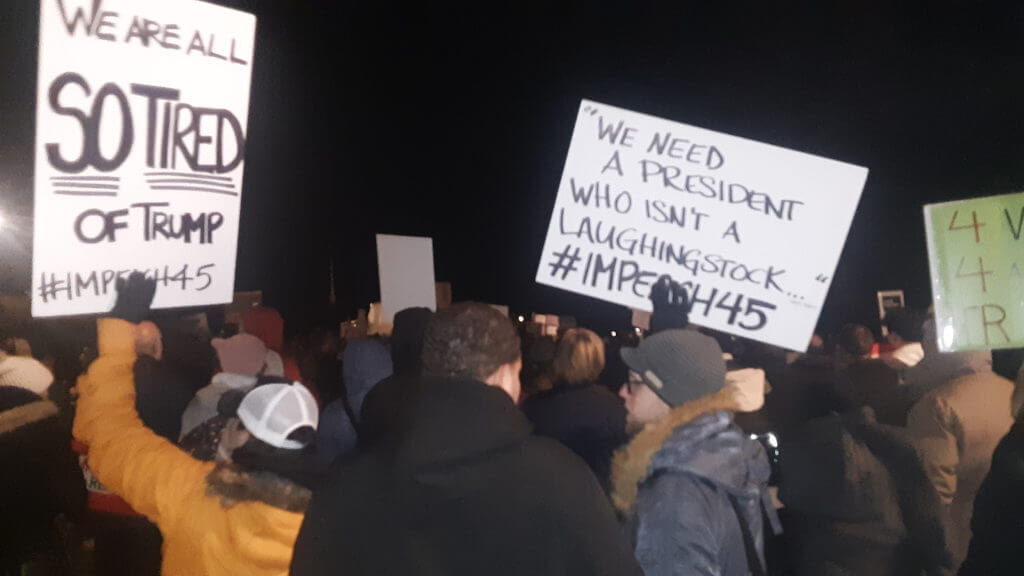 For others, like Cody Martin, a 28-year-old who grew up Republican in Tennessee, it’s because high-ranking Senators like Mitch McConnell and Lindsey Graham have said they won’t conduct the trial fairly.

“I figure I’ve never been to a protest before or anything but congressmen should follow their oaths and be impartial jurors to the Senate trial,” he said. “Because our constitution is the only thing that matters in this country and if we don’t respect that we really don’t have anything.”

If Trump is acquitted, Martin said he’s sure Trump will be voted out of office, but he’s worried about the damage the president could do between January and November. To him, it’s a nonpartisan issue.

“I mean, I would be out here if Obama did the same thing,” he said.

Paula Zenick is 66, and she’s protested since Trump’s election. For her, Trump’s conduct now is a final straw after everything else he’s done.

“I just can’t let this stuff go by without saying something,” she said. “If I don’t do something about what I see is going on now, then I have no business complaining about anybody in history who sat on their ass when they knew things were going bad.”

Zenick said the child separation policy was when she really got involved. She lived in Tallahassee, Florida at the time and every day, she stood in front of the capitol building with a sign. She said she got some death threats then, but it wasn’t enough to dissuade her.

“You know, when you find out that someone is breaking the law, it’s your obligation to stand against it. And, you know, I was around with Nixon. And what this guy is doing is so, I mean, they’re not really even comparable,” she said.

While the rally was a way to have their voices heard, and to vent some anger, some Iowans also said joining the rally was inspiring, too.

“It’s easy to sit at home and be pissed off and just complain about it to your circle,” Kate Grim said. “It’s another thing to just get out, stand with other people and it’s motivating. It’s motivating to know that there’s other people who feel the same.” 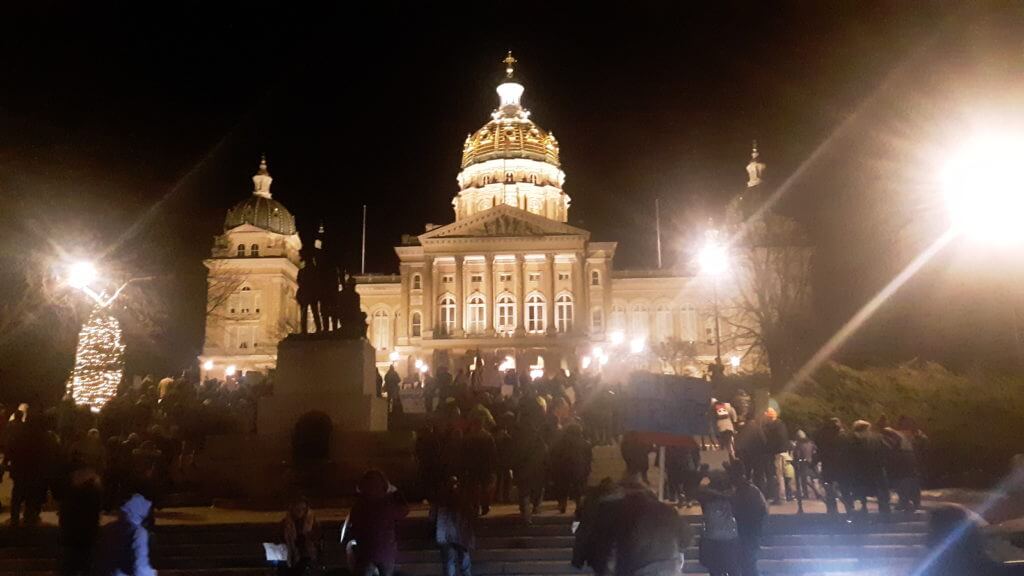 The Grims moved to Des Moines from Colorado this summer, and they said they were pleasantly surprised that so many Iowans were protesting.

Zenick said she learned the value of protesting when she was in Tallahassee.

“I’ll tell you, after the last election, I was extraordinarily depressed. And I went to the women’s march in Tallahassee and it really made me feel better,” she said. “I wasn’t the only one struggling with what was happening in my government.”

For the Sake of Democracy

Though none of the Iowans believed Trump will face consequences when impeachment moves to the Senate, they all said it was important to democracy itself that people show up and register protest.

“I can’t see how anybody can be disinterested,” said Carl Schuman, an 85-year-old who was at the rally until the crowd broke up around 6:30.

“I’m 85,” he said. “I remember World War II very well, even though I was only seven years old when it started, and people were saying, ‘How could anybody vote for somebody like Hitler?’ We found out.”

Comparisons to Hitler have been invoked since Trump’s election in 2016, but Schuman said he was very specifically talking about how Hitler was elected through democratic means and used that to seize power.

Pat Stalter, 69, echoed Schuman’s points. She also said that when she taught eighth grade, she emphasized to students how democracy needs to be defended.

“I kept saying to them, Germany had a constitution,” she said. “And it was just a piece of paper. And I said don’t you think for a minute, kids, that it can’t happen here.”

Ultimately, that was why so many Iowans showed up on the steps of the capitol and on the streets of cities across the state.

People have doubted whether protests will change senators’ minds or be enough to convince Trump to resign, but that isn’t why any Americans attended rallies last night.

“In all honesty, like many, you know, defeatists or whatever, will be like ‘dude this doesn’t matter. Like, [the people in power] don’t care. They’re going to do whatever they want.’ And that’s right. But this is the this is the way of showing that you don’t agree,” Britton Grim said. “Honestly, this is the best that we have right now.”

And, Stalter said, it’s the responsibility of Americans to take to the streets and to make their voices heard.

“We’ve got a constitution. We’ve had it a long time. But if good people don’t stand up, if we let our elected officials not follow the Constitution or say, ‘oh, that’s okay for today, this guy is enough different that he can do it his way,’ we won’t have our democracy,” she said. “It’s a constant responsibility, if you live in a democracy, to stand up.”