Five nights before the 2004 Iowa Caucus, John Kerry hosted one of his final Des Moines town hall events at the Playhouse Theater on 42nd Street. The room was packed with Democratic caucus-goers still undecided on who they’d support, and after the main program finished, Kerry stuck around until midnight until he had personally answered every attendee’s question.

It was that kind of devotion in the closing days of the caucus to finding a way to win over any and every person’s vote that helped fuel Kerry’s upset win.

We’re now entering that crunch time for this cycle’s Iowa Caucus, and while most recent polling still shows a majority of Iowans could change their minds, we’re at the point where many are looking to change it for the last time.

That means relying on the usual stump speech alone won’t cut it for the candidates who still need to move up in the ranks, especially not for the wavering caucus-goers who have already heard the message in person or from the candidates on the debate stage.

It’s personal persuasion time, which sometimes means satisfying an Iowan’s question on topics that fall far outside the usual 2020 discussion.

The candidate most noticeably shifting into persuasion mode on the Iowa trail is Sen. Elizabeth Warren, who in her trips to the state this month has cut down her stump speech to about ten minutes or less. The rest of her town halls are reserved for questions, and she’s gotten through as many as a dozen per event lately.

On Sunday in Ottumwa, Warren spoke for less than ten minutes before opening up the floor to questions and doing Q&A for more than 45 minutes. In that time, she was able to answer over ten questions while still weaving in many of the points she’d make if she were to give an hour-long stump speech. 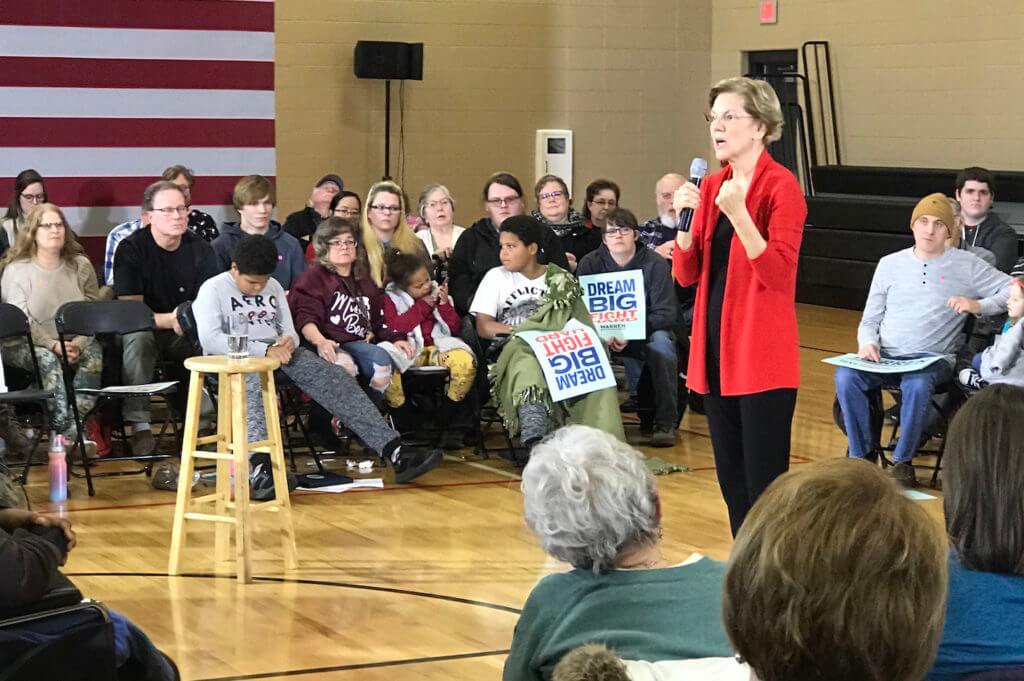 The questions covered a wide range of topics: mental health concerns, Medicare for All, gun reforms, immigration. But there were also interestingly-phrased questions on other issues.

Nancy, from Bloomfield, asked about creating legislation to limit the salary of corporate executives in comparison to their lowest-paid employee.

Dale, also from Bloomfield, very simply asked Sen. Warren what she loves about the United States.

Lynette, from Oskaloosa, asked Warren to explain which issue she would prioritize between helping homeless veterans and dealing with immigration challenges.

“It’s just an opportunity to hear directly from people. I love the Q&As, I love them,” Warren explained in a press gaggle afterward. “As you know, I’ve done Q&As in all the town halls, I’ve just changed the proportions so I get more opportunity to hear what’s top-of-mind for people. Sometimes it is just a reminder about here’s what people are thinking about; gun safety, health care, whatever it is.” 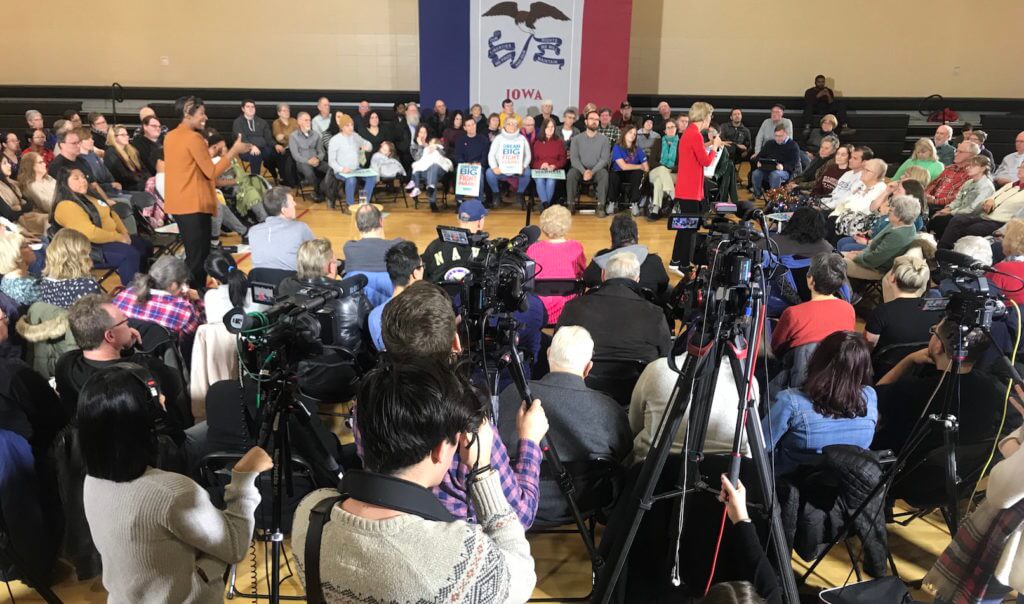 It gives Warren a chance to thank them for considering her and showing up to her event, as well a chance to connect, person to person.

“Sometimes it’s because people come up with truly new questions that I haven’t heard before,” Warren said. “But, I love the opportunity to hear directly from people, and let them hear an unfiltered version of why I’m in this race and what I’m going to get out there and fight for.”

And these experiences can mean a lot to voters. Miriam Kenning, who lives in Ottumwa, said these types of interactions carry a lot of weight come caucus night.

“Getting to have a personal moment with the candidates is meaningful. It means a lot to have that experience,” Kenning explained. “I love the plans, I love the big pictures. But I like talking intimately, I don’t like just the ‘blah, blah, blah’ that I hear all the time. I’ve heard it. How many times have I heard it?”

Kenning is still undecided for caucus night, and weighing a handful of candidates still. However, Kenning said she loved the format of the event, with the long Q&A section.

“It just feels intimate,” Kenning explained. “I love to have the chance to look the candidate in the eyes and ask her questions.”

Warren seems to share the sentiment, just on the opposite side of the interaction.

“This is, in many ways, democracy at its best. This is the kind of democracy that is really about people to people,” Warren said. “It’s not about billionaires, it’s not about TV ads, not about careful scripting, but about all of us, together, trying to decide how we’re going to build a future, not just for a handful at the top but for everyone.”

In these unscripted settings, there’s also the chance to produce more spontaneous and authentic looks into the candidate’s personality.

One of the most memorable little moments from the 2020 caucus trail came at the start of this month during a Warren event in Marion, the first stop where she tried out the question-heavy format. A young woman, who later told reporters she was a part of the LGBTQ community, asked Warren if there was a time where someone she looked up to didn’t accept her for who she was.

Warren choked up as she recounted her mother’s disappointment after her first marriage fell apart. She hugged and spoke with the woman afterward, and the resulting video from the interaction went viral online.

I was asked at a town hall “if there was ever a time in your life where somebody you really looked up to maybe didn’t accept you as much?” Here’s my answer: pic.twitter.com/ariYPwvWQr

The strategy is a useful one for Warren, but also a necessity at this point given her current polling, which has slipped a little in Iowa in recent months.

Both Bernie Sanders and Joe Biden enjoy core bases of support; Sanders among far-left voters and Biden with older Iowans. Warren, meanwhile, has some of the progressive base with her, but overall she seems to be in a fight for the ever-shifting group of mainstream progressive-to-somewhat-moderate voters in Iowa that is largely fluctuating between her, Pete Buttigieg and Amy Klobuchar. That’s also the group that looks like it’s making up its mind late in this caucus.

Warren has notably not been drawing the sort of massive crowds to her Iowa stops like when she was riding high in the polls in late summer and early fall (though it should be noted that several of the candidates’ turnouts are down, in part due to the cold, in part because more caucus-goers are narrowing their lists). But for those who are showing up, Warren’s current approach is working well and connecting more personally with caucus-goers.

As for all the candidates in this final stretch, we may see just how devoted they are to winning over that one extra Iowan here and there based on how late their last event of the day drags on. With Warren, the conversations in her famous selfie lines at the end of each event may last longer and longer as she tries to lock in every single person she can.