Andrew Yang recently kicked off his 23rd trip to Iowa as a presidential candidate with great news.

He had made the December debate stage.

“Just an hour ago, I became the seventh person to qualify for the December debates,” said Yang, a New York entrepreneur, Tuesday evening in Des Moines before jumping on his brand new bus. “That’s right. The candidate that no one saw coming just beat out a dozen or more senators, governors and congress people to make that debate stage. And I will say I am down to be the only person of color who is going to be on that stage.” 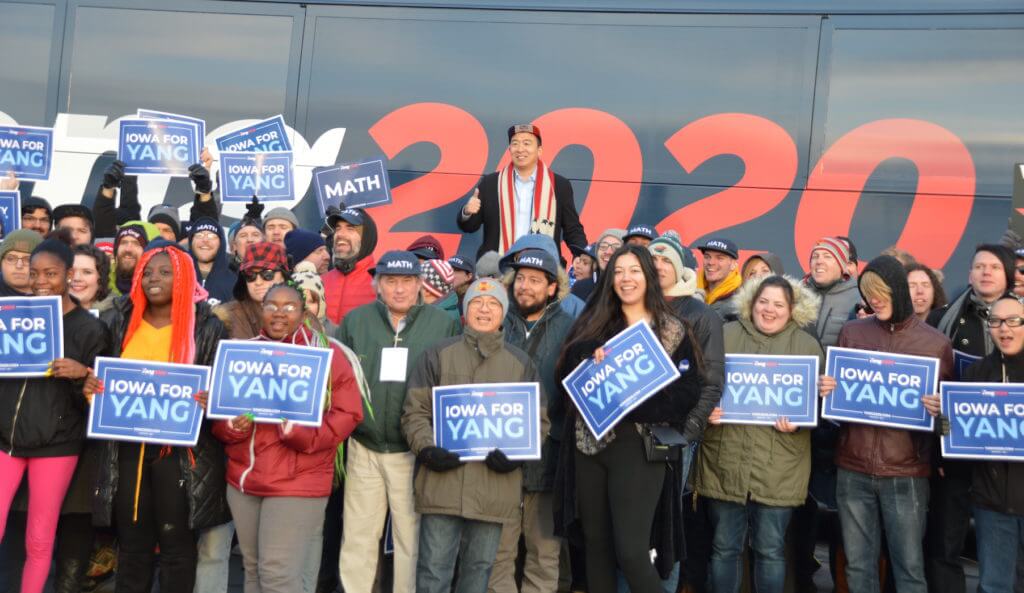 Starting Line caught up with the candidate during a breakfast with veterans at an American Legion hall in Davenport early Wednesday morning. The campaign served frosted doughnuts, a fruit tray, croissants and coffee.

Yang told a group of about a dozen veterans that the first time he came to Iowa he didn’t have a big blue bus or television cameras following him.

“We had a very hard-core team,” Yang said. “I’m not a politician. I’m a parent and a patriot and I saw what was going on around the country and I said we really can do much, much better. We need to rewrite the rules of our society and economy to work for us and to work for the people of this country.”

Heidi Day, a United States Navy veteran who enlisted in the summer of 2001, just before the 9/11 terrorist attacks, introduced Yang to the Iowa veterans. She spoke about suicide among veterans and how new data show 17 veterans a day take their own lives. 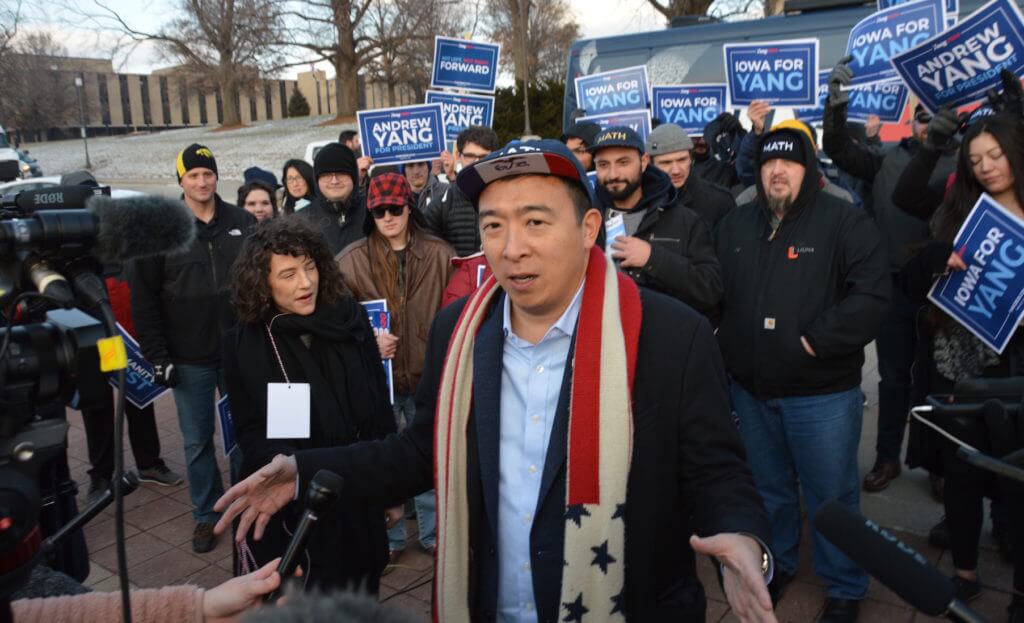 Yang pushed the idea that he cares about people more than politics throughout the day.

At the same event, Yang said Washington, D.C., does not succeed or fail based on the well-being of lawmakers’ constituents.

“How many of you knew Washington, D.C., is now the richest metro area in the United States?” Yang asked. “What do they produce? Bad decisions? A lack of accountability?”

After breakfast, Yang headed to Big River Bowling, where he grabbed the alley’s mic and gave a quick version of his stump speech to a crowd of more than 100.

“Nothing like some mid-day bowling, am I right?” Yang yelled to applause. “I’m Andrew Yang and I’m running for president to rewrite the rules of the 21st-century economy to work for us.”

Yang used the crowd to his advantage and busted out the interactive portion of his well-known stump speech.

“How many of you know of a store that’s closing right here in Iowa?” he asked, to a crowd raising their hands before the question was finished. “Why are those stores closing?” Yang asked. “Amazon!” the crowed yelled back.

Yang hurled four bowling balls toward pins at the bowling alley. He threw one gutter ball, followed by two strikes. Then he knocked down seven more pins on his last try.

When he was done bowling, Yang went to Cedar Rapids to speak with state Sen. Rob Hogg about climate change.

“I first heard about Andrew Yang on a podcast where he was being interviewed, and within just minutes of listening to him talk, he sparked my interest in a way no other candidate or politician had,” Jackson said. “One of his slogans that really struck me was: not left, not right, but forward.”

Jackson mentioned she has dealt with the hostility and hate that has been bred out of current political culture throughout high school.

“Yang’s political outlook is a breath of fresh air,” she said. “Yang isn’t interested in the rhetoric of one side of the argument, but he listens to everybody with respect. He’s an outsider to politics, sure, but he’s the right kind of outsider. He’s experienced with the economy and the business of our country.”

Yang took a number of questions during the event from Hogg and from the high school students gathered at the event.

He explained he has a 60-page policy addressing climate change and spoke about how the country generally needs greater resources to make communities more resilient to natural disasters.

Yang also said the poor are the most adversely affected by major disasters because they don’t have a second shelter to go to, or a car to use when climate-related events happen.

“My flagship proposal is, if you’ve heard anything about me, it’s that every American gets $1,000 a month starting at age 18 until they die,” Yang said, pitching his Freedom Dividend to the crowd early on in the conversation.

Yang’s next stop was at the IBEW/Miller Hall in Cedar Rapids for a union town hall, which was closed to press.

His tour continued with an office opening in Ames Thursday morning, and then a noon basketball game with J.D. Scholten, the man campaigning to unseat Congressman Steve King. Yang and Scholten played on the same team during a 3-on-3 battle against one of Yang’s staff members and some of J.D.’s friends. They ultimately lost 24-20 to the guest team, although it was a close game the whole way through.

“It was supposed to be one-on-one, J.D. against me,” Yang said. “But we wised up to the fact watching J.D. blast me would not be very interesting for anybody. So, then me and J.D. teamed up just like we’re going to team up to beat Steve King and Donald Trump to solve the problems we see here in Iowa.”

Yang will be in the state through Saturday, and tonight will attend the Cy-Hawk basketball game tonight with students from the University of Iowa and Iowa State University.

1 Comment on "Basketball, Bowling And A Bus Tour With Andrew Yang"