The International Brotherhood of Electrical Workers Local 55 has made Christmas wishes come true for dozens of Iowa families throughout the last five years.

Ever since union membership voted to create the Helpful Elves program, Local 55, partnering with the Local 145, the Local 1634, the Local 204, the Liberty Line Builders, RS Electric Utility Services, Intren and radio station KXIA-FM, has given between $60,000 and $70,000 to families who need the money most during the holiday season.

Shane Nelson, an assistant business manager of the Local 55, said the program began around November 2014 when the local IBEW group realized they had about $2,000 left in a charity fund.

The union took a vote as to whether they should give the money to Toys for Tots or a similar charity, or whether they wanted to start their own organization. They voted for the latter.

Nelson began calling radio stations near the Des Moines metro area and KXIA-FM of Marshalltown agreed to help spread the word. Nelson and other union members quickly began calling contractors and other local unions in the area and raised about $14,000 to give to families the first year.

That year meant a lot to Nelson, who ultimately helped a girl with leukemia celebrate Christmas at home with her dad and brothers.

The girl was living with her mother at her grandmother’s house at the time because their home wasn’t handicap accessible.

So, Nelson tracked down a $20,000 ramp the Local 55 purchased for just $2,000, and he helped install it at the girl’s house. On top of that, the Helpful Elves were able to give the girl’s family another $2,000 so they could celebrate Christmas.

This year, people can submit families that should be considered for the Helpful Elves program at this link through Dec. 12. Winners will be announced daily on KIX 101.1 at 1:20 p.m.

Any family is eligible, though Nelson said he tried to find families with kids who are affected by, or those who have suffered from, an accident or illness.

“Some people are just down on their luck and when they list off all their issues but they’re just a drop in the bucket,” Nelson said. “We’re looking for somebody who has given it the good try and something has happened to them.” 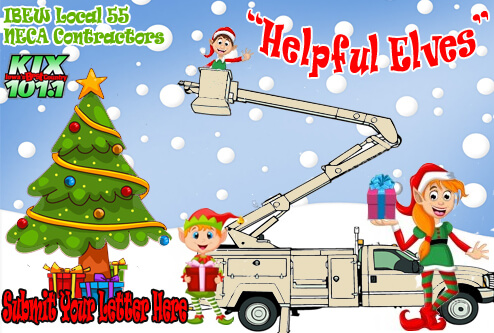 Rusty McCuen, assistant business manager at the Local 55, said unions have done this type of work for years, they just don’t advertise it much.

“We feel like we’ve gotten good wages and benefits, and to be able to help someone else and step up is what we are here for,” McCuen said. “If we all do good, we all do good. That’s just the ideals of the union. Why not help people?”

Nelson said many unions are behind the curve when it comes to advertising the good deeds they do for their communities.

“We want people to recognize who we are, but we also want to recognize the fact that we probably have a higher paying benefit package than most of the people that work in the state, and it’s not a bad idea for us to reinvest back into the towns,” Nelson said. “And besides the fact that a lot of our work goes through small town Iowa, it just makes it a better environment if they know who we are and that we’re good people.”

Local 55 is roughly 1,100 members strong. It represents workers from several companies and organizations, including workers at Power Line Construction, DirecTV and 18 to 20 municipalities in Iowa. There are IBEW Local 55 members in 92 of Iowa’s 99 counties.